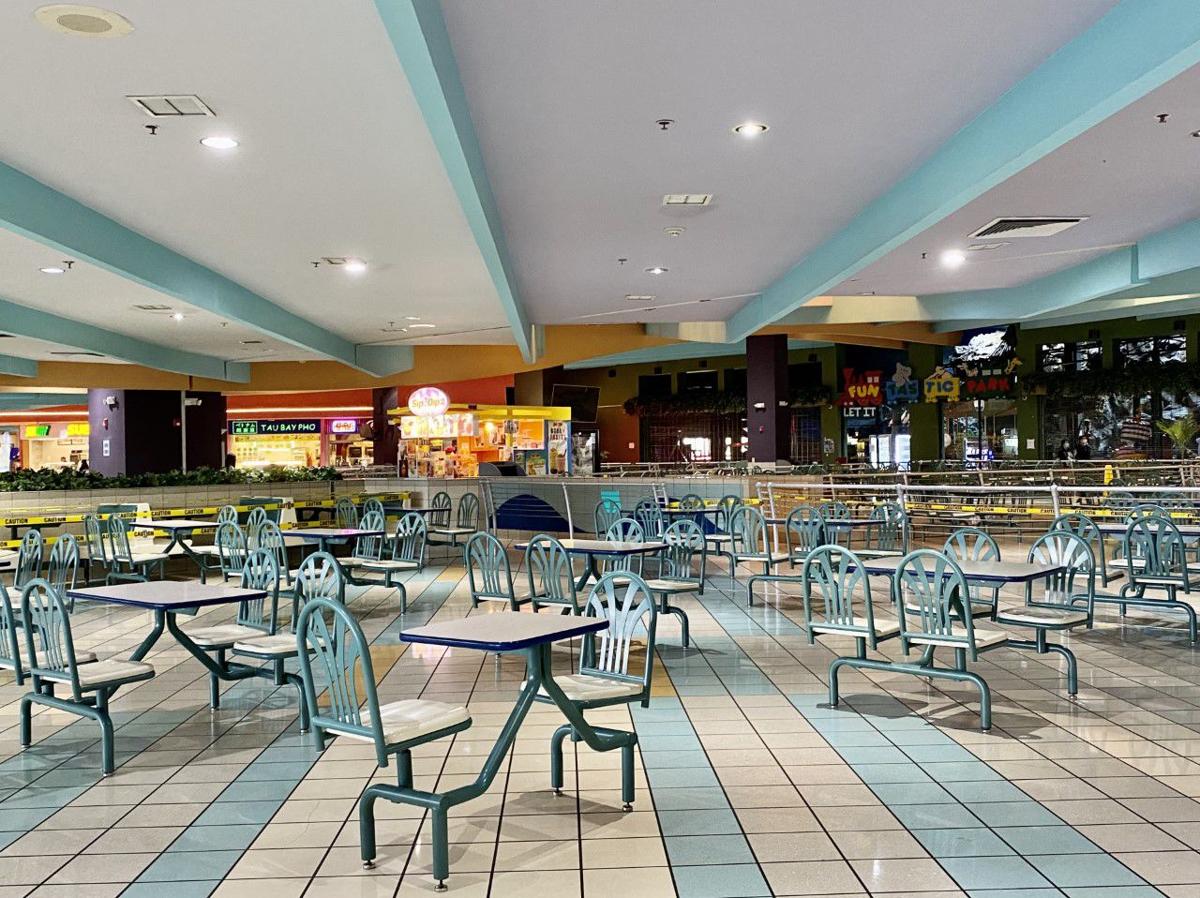 SEATING: Micronesia Mall rearranged its food court, giving wider spaces between tables so that customers will have enough social distancing when dining-in at restaurants and other food establishments are allowed to reopen. Haidee Eugenio Gilbert/The Guam Daily Post

DISTANCING: Lines on the floor guide shoppers to the food vendor of their choice at the Guam Premier Outlets food court reopening on May 12 in Tamuning. David Castro/The Guam Daily Post

SEATING: Micronesia Mall rearranged its food court, giving wider spaces between tables so that customers will have enough social distancing when dining-in at restaurants and other food establishments are allowed to reopen. Haidee Eugenio Gilbert/The Guam Daily Post

DISTANCING: Lines on the floor guide shoppers to the food vendor of their choice at the Guam Premier Outlets food court reopening on May 12 in Tamuning. David Castro/The Guam Daily Post

Restaurants have been preparing for the day they get to serve dine-in customers once again, and May 25 looked to be that day until the governor announced her decision to put the plan on hold.

"Very disappointing. We were planning everything toward Monday. I don't think a pod in Yigo will affect any restaurants around the island," said Jeff's Pirates Cove restaurant owner Jeff Pleadwell.

The change of plans came a day after 11 new individuals tested positive for COVID-19 on Wednesday, the third-highest report of cases in one night since the start of the pandemic.

Ten of the 11 cases are not of the same family but come from the same residential cluster in Yigo.

Gov. Lou Leon Guerrero on Thursday announced Guam will remain in Pandemic Condition of Readiness 2 with the 11 new cases confirmed in a single night, and has decided to delay the opening of dine-in restaurants after meeting with the state surgeon cell.

The governor's initial plan was to lift more business restrictions to allow dine-in restaurants, yoga studios, public parks and beaches to reopen on May 25, which would have coincided with the Memorial Day holiday.

The governor on Monday said she will review the data this week for a possible partial lifting of restrictions but she didn't say when..

Micronesia Mall General Manager Fred Yamon said there's "disappointment" over the rescheduled opening of dine-in restaurants since most of the mall's tenants have been looking forward to it.

A "mall setting always involves shopping, dining and entertainment. We may skip entertainment for a while, but dining brings synergy to the tenants," Yamon told The Guam Daily Post.

In preparation for the reopening of dine-in services, Micronesia Mall had rearranged its food court to provide wider spaces between tables so that customers can maintain social distancing.

But while restaurants at the mall and its food court are still limited to food-to-go services, more Micronesia Mall tenants have reopened, including Ross Dress for Less, Macy's and Foot Locker.

Guam Premier Outlets General Manager Monte Mesa raised questions on the Department of Public Health and Social Services' target number of daily mass testing to be conducted, whether it's scheduling more mass testing in the north, central and south villages, and how many testing kits it has on hand today.

He also asked for the expected date of arrival for the next shipment of test kits, and how many.

"Without conducting more mass testing, the governor will not be able to set a date for restaurants to open with dine-in service or even set a target date to lift the mandatory 14-day quarantine so we can start planning to welcome back our tourist visitors from Korea, Japan and Taiwan," according to Mesa, a former board member of the Guam Economic Development Authority.

Compadres Mall has also been looking forward to the May 25 reopening of restaurants' dine-in services.

The governor's decision, according to Pleadwell of Jeff's Pirates Cove, is "hurting" restaurants.

Even those that applied for the federal Paycheck Protection Program loan are impacted since they have limited time to spend the fund yet restaurants are not in full operation.

"I plan on keeping more people working, fully open or not," Pleadwell said. "(The governor) may change her mind back. You never know."