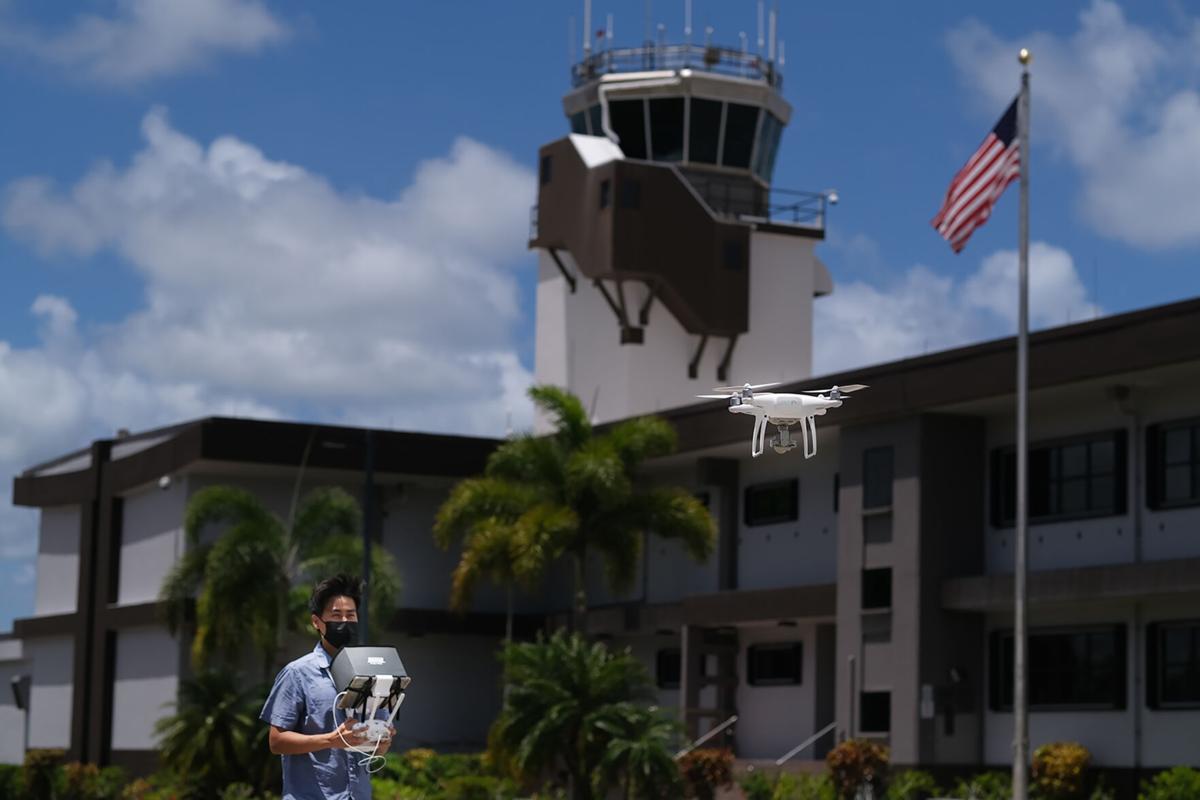 PILOT: Drone pilot Dong Won Lee flies a drone at the Federal Aviation Administration Air Traffic Control Facility during a 3D mapping project. Lee is a certified drone pilot who received certification from the FAA to fly in what is normally a no-fly zone. Norman M. Taruc/The Guam Daily Post

Advancements in drone technology have been making big splashes in international headlines for years. In 2016, CNBC reported that the first pizza delivery by drone was executed by Domino's in New Zealand. Jeff Bezos, the founder of Amazon.com and occasionally the world's wealthiest man, has formulated Amazon Prime Air as the drone delivery component of the massive retail business. Last month, Samsung launched a drone delivery service of its products in Ireland. Walmart and UPS have already announced similar drone based components to their business models.

While those businesses focus primarily on product delivery, aerial technology is also changing the scope of civil construction and construction engineering. According to Dong Won Lee, "Drones are being rapidly integrated into the construction industry due to the way the devices have revolutionized surveying and the compilation of worksite data."

Lee is the founder of 2cofly (pronounced E-co-fly), a technical drone service that can provide data for orthomosaic mapping, 3D point clouds and 3D models. Lee said that engineering work, such as surveying, that used to take weeks, or months, can now be accomplished in days, or even hours.

Lee, who holds a Federal Aviation Administration Part 107 license, was flying a drone at the FAA Air Traffic Control Facility for a 3D modeling project. A certificate of authorization from the FAA and a strict series of security clearances were necessary to get the flying portion of the mission accomplished. Hours of postproduction using specialized computing hardware and software are required to complete the 3D rendering.

"This is a great example of providing 3D modeling using drone technology," he said.

While drones in construction can have multiple applications, including topographic mapping, land surveying, equipment tracking and security surveillance, Lee stresses that proper licensing and adhering to FAA regulations is paramount.

In a December 2020 interview with The Guam Daily Post, Charlie Hermosa said he felt that application of drone technology would be in such high demand that it would spawn a new industry for the island. Hermosa is one of the co-founders of Bella Wings Aviation and he has formulated several angles of drone use in his business model, including product delivery, search and rescue and advertising. The advancement of drone usage in the construction business could be another major stepping stone toward a full-fledged drone industry on island.