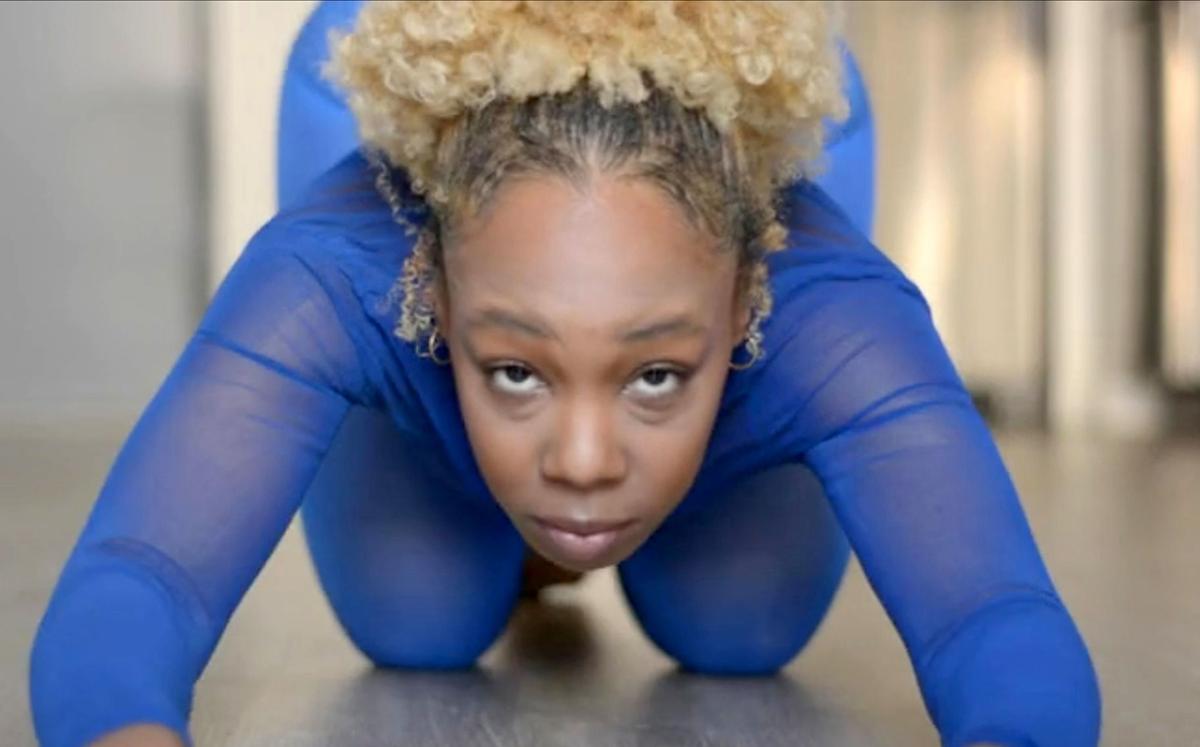 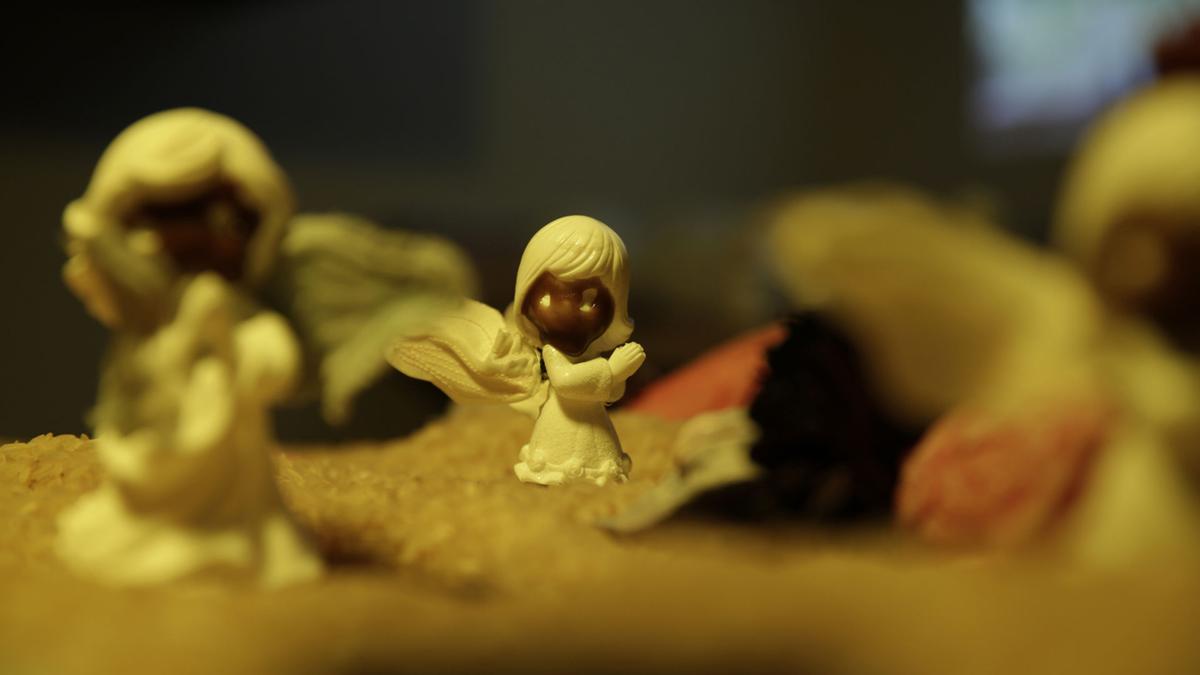 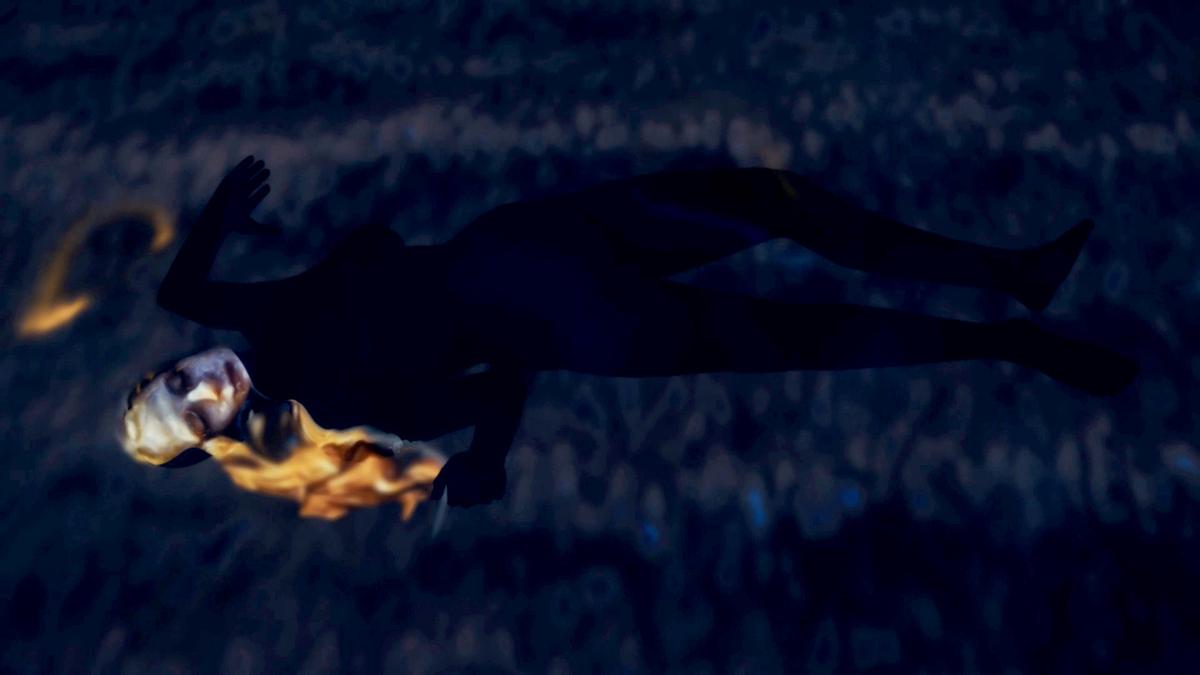 Some people believe certain spaces ought to remain ideologically neutral: Don't talk about politics at the dinner table, as the saying goes. But artist Stephanie J. Williams, whose short, stop-motion animation "Pinoy/Ploy" - staged on a kitchen table using Precious Moments angel figurines who end up in blackface made from thick globs of Aunt Jemima syrup - has no patience for such pretense.

In Williams's work, which is included in the Baltimore Museum of Art's new online Screening Room, a stare-down ensues between an angel army and a pack of duck embryos (in the Philippines, balut is a delicacy made from boiled, fertilized duck eggs). The balut, veiny, and depicted here with long, sandpapery tongues, suggest something deeper and more troubling than any food item; they seem made to trigger some Americans' discomfort with otherness. And the angels, their hands in prayer, wings fluttering, call to mind the assumed whiteness of Jesus and other figures depicted in ecclesiastical sculpture. For a moment, standing in piles of Uncle Ben's rice and puddles of brown syrup - a landscape of racist tropes - the protagonists make the hushed colonialism lingering in cabinets and cul de sacs loud and clear.

Amid social and political unrest, museums have had to come to grips with the fact that their spaces - like the quiet corners of suburban homes - are not neutral. The coronavirus and protests of racial injustice present a two-pronged crisis: Museums are now being called upon to rethink the history of exclusion, while under financial pressure and without a physical place to grapple with that theme. While many art spaces have thrown together digital programming and released lukewarm statements about solidarity with protesters, the BMA's Screening Room goes a step further in addressing the struggles of the moment.

In selecting the work, curators emphasized emerging female artists, transgender artists, and artists of color who are based in or from Baltimore. The 48 short works by 21 artists are wide-ranging in form - documentary, narrative, experimental - and tone, from Emily Eaglin's psychedelic faux-reality show, "Fairywood," to the sober documentary films of Lendl Tellington. It can feel a little disjointed at times, but on websites that have, for too long, been underutilized by even the most digitally savvy museums, curatorial choices are unencumbered by convention. If museums are to re-examine their practices, there might no better place to do so than outside the walls that have held up the status quo.

Online, a museum can situate itself in the present.

Williams's 2016 work has a particular salience now, as Aunt Jemima and Uncle Ben's parent companies reconsider the offensive stereotypes presented in their products. And a few video works in the screening room address the pandemic directly.

In "Sketch for Sleepers," Mollye Bendell uses images of faces from video chats, projected onto the dark silhouettes of human bodies. Floating across the screen, the flattened, disembodied faces capture a uniquely-of-the-moment feeling of alienation – informed by the artist's fear that she might see her loved ones for the last time over video. Performance artist Nicoletta Daríta de la Brown's "Movement Response Journal No. 1-3" uses physical movement to document the passing days in isolation. Lockdown, as seen in her film, is characterized not by alienation, but by close, even mystical alignment with the body in its many folding, extending, stretching forms.

The Screening Room provides the proper context offered by the traditional museum space - each video has a synopsis - but also has the more casual feel of social media. Bendell's work is the beginning of what she calls a longer "study on sleeping together," and de la Brown's videos are experiments: "part research and part practice of vulnerable self-awareness." Here, artworks that sort through emotion in real time are valued as much as a polished final product.

Most of the works on the site run from two to eight minutes. Those that run longer – such as Jules Rosskam's "Dance, Dance Evolution," a joyous, 17-minute documentary about transgender dancers, and Tanya Garcia and Juan Ortiz's 14-minute "Life in Shadows, Written in Light," a collection of first-person accounts of mass incarceration and migrant detention – are worth the time.

The design of the page, which reshuffles the videos each time you visit, re-creates the serendipitous feeling of stumbling upon work in a gallery, while also freeing the works from the hierarchy that would result from more rigid curation. According the site's designers, a case could be made for any of the videos to come first. At some point, each of them does.

The Screening Room, which is expected to grow to include 50 artists, came to be to support artists who engage in what the BMA calls "creative speculation" about the future, during trying times. In many cases, watching the videos feels like an antidote to those times. The poetic video portrait "A Black Girl's Country," by Nia June, and "Imagining as Praxis," an Afrofuturist meditation by the art-making and programming initiative known as As They Lay, offer vastly different, but equally optimistic, visions of a future beyond the injustices fueling protests today.

Underlying BMA's Screening Room, a project that was pulled together in weeks, under the constraints of a pandemic, is a vision for the future: one in which the institution of the museum is not necessarily the final authority - a narrator of fraught histories - but a dynamic, responsive platform for artists and ideas.