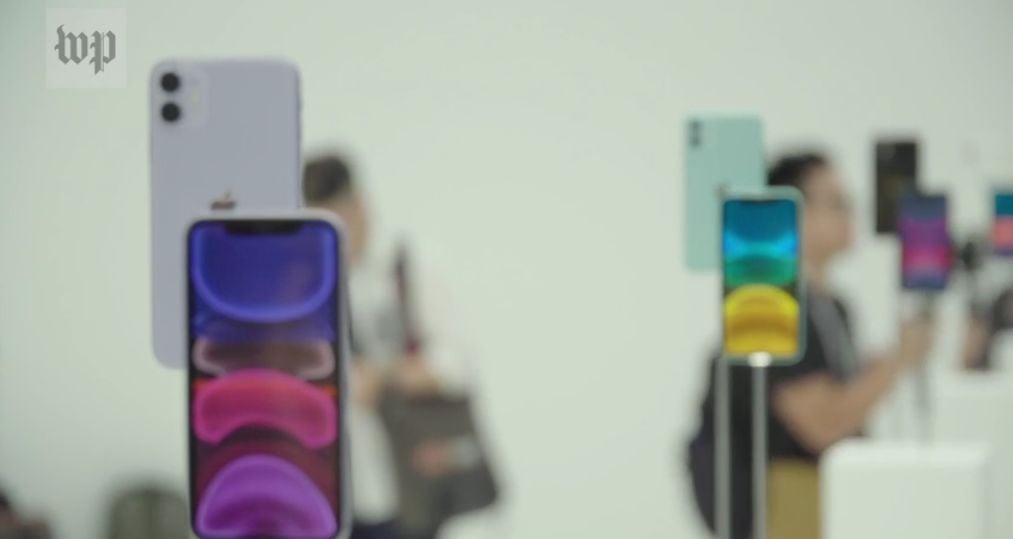 AN UPGRADE?: A screenshot of the newly released iPhone 11 is shown during an Apple conference recently. The screenshot was taken from a video on The Washington Post featuring Geoffrey A. Fowler. 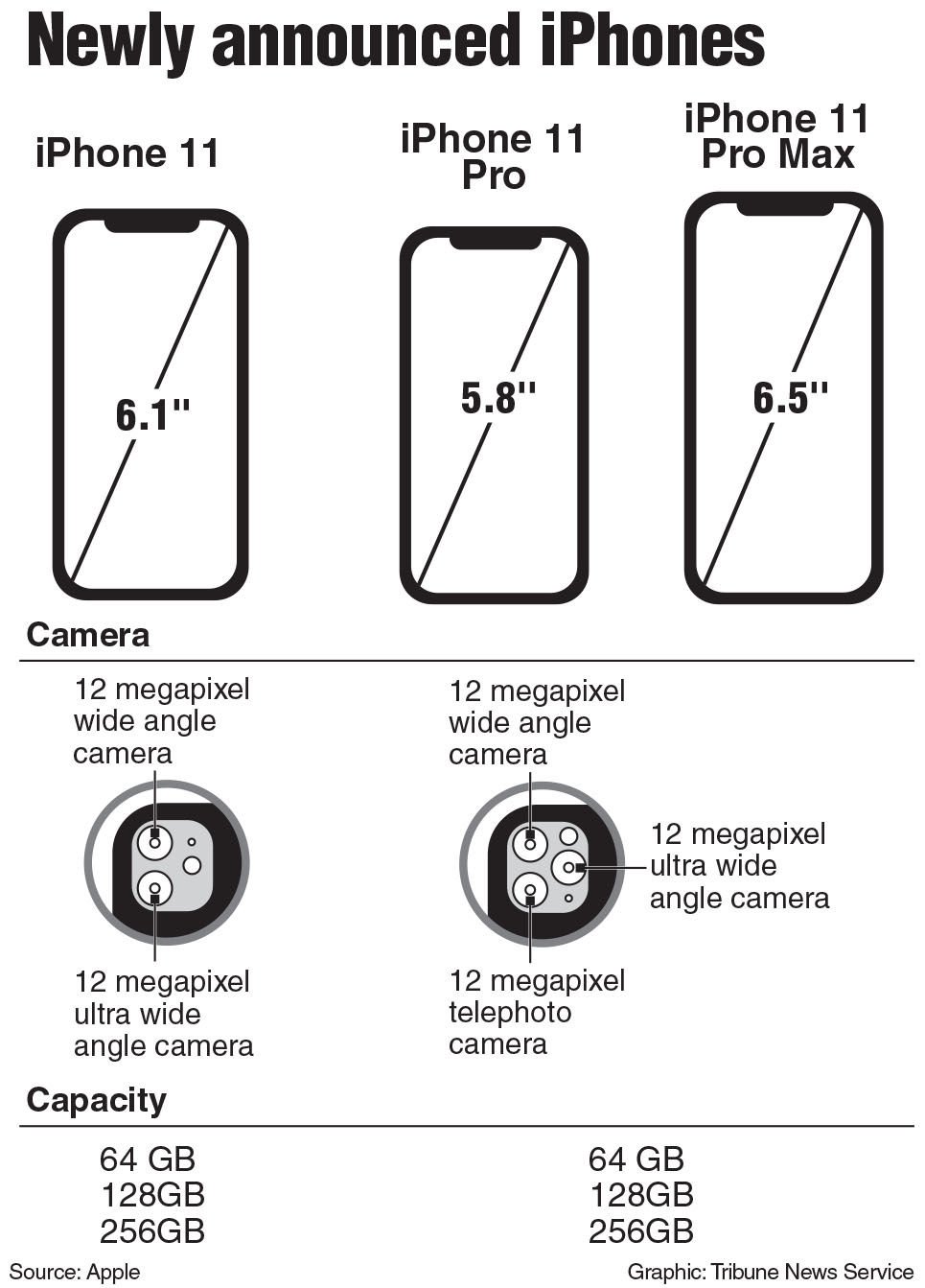 AN UPGRADE?: A screenshot of the newly released iPhone 11 is shown during an Apple conference recently. The screenshot was taken from a video on The Washington Post featuring Geoffrey A. Fowler.

When you hold an iPhone 11 Pro, there's just one thing that makes it look new: a third eye.

No, Siri hasn't opened a portal to your soul. Apple just added a third camera to the back of the fanciest iPhones to encourage you to upgrade. As a camera guy, I can tell you three lenses are better than one. But this "triPhone" will cost you $1,000 - or more.

I had a chance to try the new iPhones after Apple's launch event Tuesday. Figuring out whether to buy a new iPhone always requires sorting through marketing mumbo jumbo. Is it a legit upgrade . . . or just another upsell? This year's crop of iPhones, arriving in stores Sept. 20, offers some of the most incremental improvements I've ever seen from Apple. However, there are also ways to avoid overpaying for features you don't really need.

If you're currently using an iPhone 6, 6S or 7 - which covers about half of the globe's iPhone owners, according to research firm Sensor Tower - any of the four phones above is going to feel like a major upgrade. They all have larger screens, better battery life, better cameras, faster processors and Face ID instead of the fingerprint reader.

If you crank it up to iPhone 11 instead, what do you get? A fair amount of upsell: You'll get a processor that feels just slightly faster (but might make the phone last longer), stronger glass (that you still shouldn't drop on concrete), and Face ID that might work even when the phone is flat on a table. Apple claims the battery on the 11 Pro lasts four hours longer than last year's laggard iPhone XS. And there are some new colors with names like "midnight green" - like green, but darker.

Still, you won't get some features rival Android phones have. You can't wirelessly charge headphones on the back of the phone. The screen doesn't fold up to fit in your pocket. There's no support for ultrafast 5G. And don't hold your breath about ever getting back a headphone jack - that's how they upsell AirPods.

Despite all that, the No. 1 selling point of the iPhone 11 is the camera. There is a set of people, myself included, who use their phone more as a camera than as a phone. For us, the prospect of a significantly better camera is a big deal.

How much better is this camera? Let's zoom into the details, because I'm not yet convinced it's $1,000 better.

The front-facing camera on all of the 11 models is capable of slow-motion selfies, or what Apple is really hoping people will call "slofies." I can report these look great on anyone with long hair and a fan, not so great on people with prominent cheeks like yours truly.

All the iPhone 11s also have - at long last - a night mode that helps you get shots without a flash in dim restaurants, on moonlight vistas and other places you have fun in the dark. Apple's description of the technology was vague, but it sounds like it stitches together multiple shots like the Night Sight mode on Google's Pixel phones. The verdict is still out whether Apple's version is as impressive.

And this brings us to all the lenses making the back of phones look like beehives. High-end iPhones have come with two back lenses since 2016, typically one for regular wide shots and another for two-times zoom.

The entry-level iPhone 11 includes a second lens missing in the XR - but it adds ultrawide shots, not zoom. This is a disappointment: Ultrawide angle is useful if you're Ellen DeGeneres at the Oscars or trying to wrangle your own large group of friends into a photo. Ultrawide is one step before fish-eye. But in my life, I much more often want to zoom in - to a concert, sunset or other attraction in the distance. The iPhone 11 doesn't help there.

The lens count notches up to three on the iPhone 11 Pro and 11 Pro Max. They're buried inside a square glass bulge, which sadly makes the phone lie unevenly on a table. (A case could help with that.)

So what makes three eyes better than two? To start with, now you can take regular wide, zoom and ultrawide shots. The iPhone interface makes switching between them feel as smooth as turning a dial. Giving a photographer more lenses is like giving a painter more colors, and I'm sure it will unleash a lot of new creativity in iPhonography. But again here, I would have wanted even more zoom over an ultrawide angle option.

In one demonstration, Apple showed how a video-recording app could capture input from all three lenses - plus the one on the front - at the same time. Imagine filming someone and capturing their face, as well as your own, all at once.

Apple didn't show that capability for still photos. And when I tried taking shots, it only kept an image from a single lens, not all three.

Super camera buffs will also be interested in one more thing Apple promises is coming eventually through a software upgrade. A mode called "Deep Fusion" will use artificial intelligence to boost the detail and range of tones in your photos. Here's how it works: The iPhone takes four long-exposure and four short-exposure photos before you press the shutter - and then another longer one when you press the button. Then the phone merges them into one, keeping just the sharpest details, with the least amount of "noise" from the camera sensor. Apple executive Phil Schiller called it "computational photography mad science."

This sounds fascinating, and it's further evidence that our photos are "fake" now - generated by computers to produce the most pleasing images.

But we don't really know yet how good these iPhone 11 shots will look. Apple is no longer the hands-down camera leader. Samsung already sells a phone with four (!) back lenses, the Galaxy S10 5G. And Huawei's P30 Pro has a five-times optical lens that telescopes inside the phone.

In the days ahead, Apple will undoubtedly show off pretty photos taken by hand-selected photographers and the company's special friends. But if you're considering spending your hard-earned savings on an iPhone just for the camera, I'd recommend waiting until independent photographers and journalists like yours truly have had a chance to test these features in the real world.

Borrowing from the Retirement Fund isn't a good idea. So what other solutions can elected officials provide?

In his efforts to find solutions that would help Guam’s thousands of displaced and struggling private sector workers, who are essentially left… Read more

Lockdown Week 4: The art of slowing down

This week, I discovered a video that the Portland Museum of Art in Maine produced and circulated on social media. It was about looking slowly … Read more