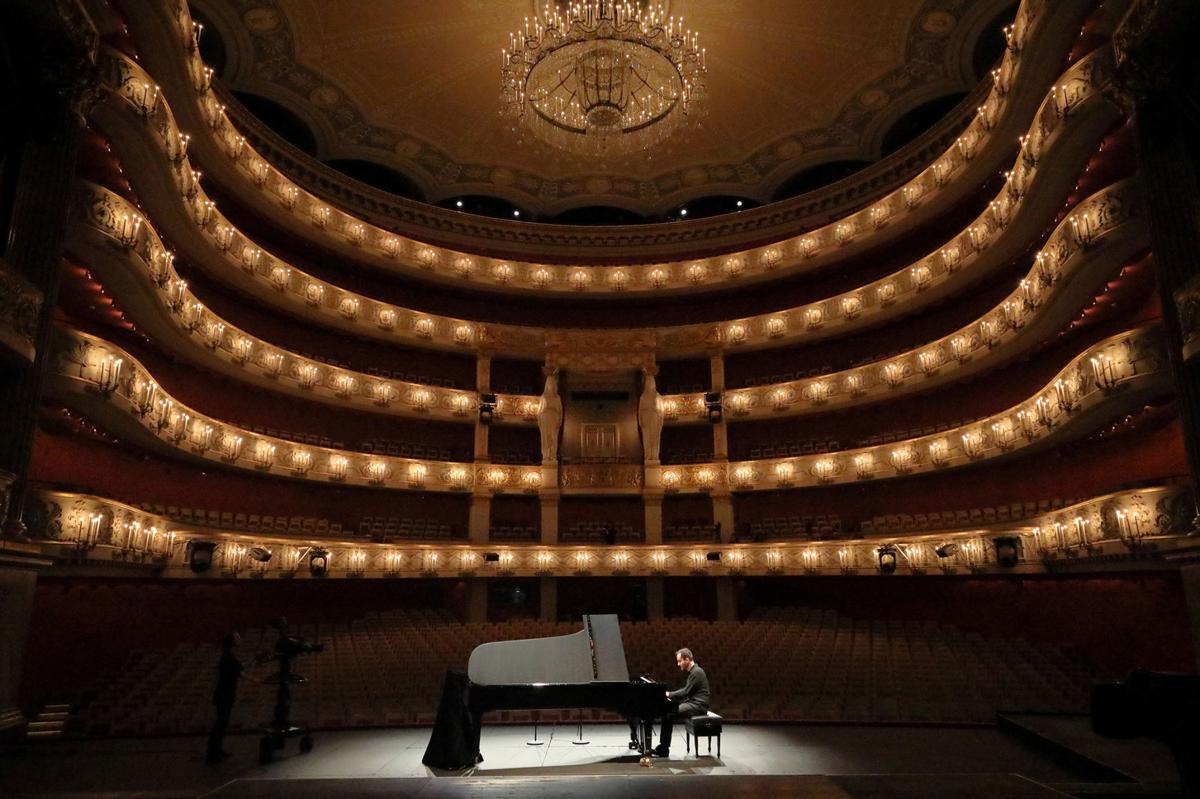 AN EMPTY HOUSE: Pianist Igor Levit performs to an empty house March 16 at the Bayerische Staatsoper in Munich. Wilfried Hosl 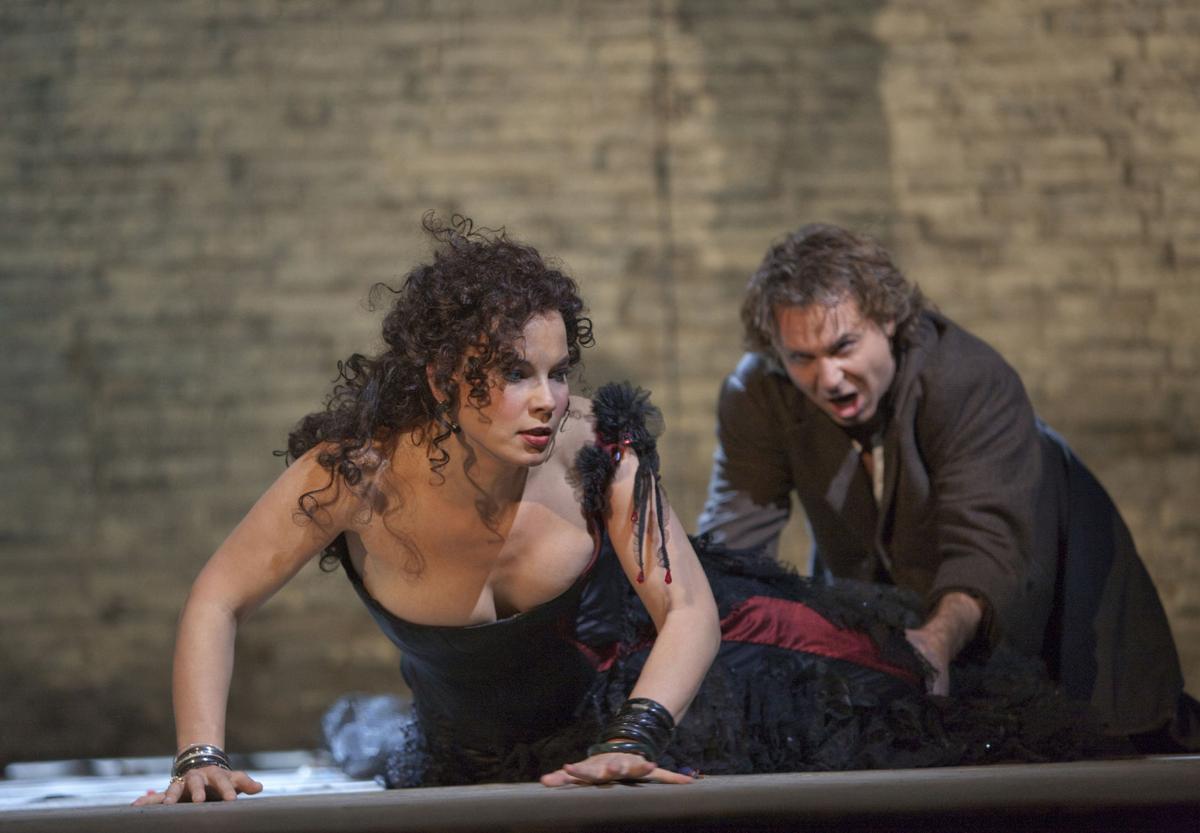 LIVE STREAMS: Elina Garanca as Carmen and Roberto Alagna as Don José in a dress rehearsal of Bizet’s “Carmen.” Closed to the public amid the coronavirus outbreak, the Metropolitan Opera has begun a series of “Nightly Met Opera Streams.” Ken Howard/Metropolitan Opera

AN EMPTY HOUSE: Pianist Igor Levit performs to an empty house March 16 at the Bayerische Staatsoper in Munich. Wilfried Hosl

LIVE STREAMS: Elina Garanca as Carmen and Roberto Alagna as Don José in a dress rehearsal of Bizet’s “Carmen.” Closed to the public amid the coronavirus outbreak, the Metropolitan Opera has begun a series of “Nightly Met Opera Streams.” Ken Howard/Metropolitan Opera

The plan was to spend my first week as The Washington Post's new classical music critic seeing concerts and shaking hands. (Just typing that makes me want to sanitize.)

The goal was to go big, starting on Thursday night with a performance by the Baltimore Symphony Orchestra of Mahler's Third - a titanic work that lands somewhere between celebration and simulation of nature, its monumental first movement one of the longest on record (where it typically consumes an entire side).

Then on Friday, I'd watch Kronos Quartet launch into Terry Riley's "Sun Rings," the composer's 2002 collaborative work for quartet, chorus (in this case, the Choral Arts Chamber Singers) and sounds recorded and beamed back from space by Voyagers 1 and 2.

On Saturday afternoon, I'd intended to visit the Kennedy Center for "p r i s m," the Pulitzer-winning opera from Ellen Reid. Then I'd dart over to the Hirshhorn Museum for the 21st Century Consort's "Water Music" program, highlighting watery works by composers including Tan Dun, Luciano Berio and Kati Agócs and positioned to complement "Color Wheel," the museum's expansive exhibition of Pat Steir paintings.

And to finish the weekend, I had devoted all day Sunday to watching and writing about the local debut of Jeanine Tesori and Tazewell Thompson's sure-to-be-stirring "Blue," a tragic opera set in Harlem telling the tale of a black family whose teenage son is shot by his father's white colleague, a police officer.

Then came the coronavirus, and the sudden lack of things for a critic to critique seemed the least of our problems.

Within one weekend, such terms as "self-quarantine" and "social distancing" wedged themselves into our daily lexicon, and the abundance of caution that prompted the first few institutions to postpone, cancel and close had spiked into something more like a national condition: collective isolation.

This disruption of public life qualifies as a novel state for the millions of Americans now withdrawn into ersatz home offices. But music specializes in dissolving notions of private and public. With music, this liminal space between alone and together is something of a sweet spot. Every time we push our ear buds in on the subway, or fall into silent contemplation among hundreds of fellow listeners in a crowded concert hall, we tap into music's unique power to blur individual and collective experience. In a way, it's the original social distancing.

And once the outbreak of apologetic news releases spread over the surfaces of social media (cancel culture at work?), the immune system of the classical internet sprang into action. (An "étude for piano and disinfectant wipe" that went figuratively viral was only the beginning.)

As halls and orchestras from coast to coast called off months-long swaths of their seasons, a rogue wave of live-streamed musical performances flooded Facebook and Twitter.

Some of this pop-up programming was produced on smartphones, impromptu and intimate, as when the tenor Maurizio Marchini followed the lead of his fellow Italians in the hard-hit cities of Salerno, Naples, Siena, Agrigento and Rome by taking to his balcony (real and virtual) to serenade his neighbors in Florence. His "Nessun Dorma" rang over the rooftops and through the ear buds of thousands.

Meanwhile, more institutionally based first responders approached the outage like a task force intent on ensuring that no hard work would go to waste.

The Metropolitan Opera announced that it would fill the silence of its closure with a nightly series of free encore streams on its website, including its 2010 production of "Carmen" starring Elina Garanca, its 2008 staging of "La Bohème" starring Angela Gheorghiu and Ramón Vargas, and (on Sunday) its 2007 production of Tchaikovsky's "Eugene Onegin" starring Renée Fleming. Meanwhile, Joyce DiDonato and Piotr Beczala, the stars of the Met's canceled production of Jules Massenet's "Werther," performed a suite of excerpts on Facebook, live from DiDonato's living room.

Across the plaza, the Chamber Music Society of Lincoln Center offered audience-free live streams of works by Schoenberg, Murail, Bartók, Dohnányi and Tchaikovsky.

In Boston, the classical radio station WCRB already broadcasts more than 50 performances a year from Symphony Hall. Last week, it announced rescue missions to live-stream potentially canceled concerts, including a dress-rehearsal recording of the Boston Lyric Opera's production of "Norma." On Monday, the station will begin broadcasting encore performances from the Boston Symphony Orchestra.

Station manager Anthony Rudel hopes the station's efforts will not only prevent a lot of hard work from going to waste, but also give the music a broader audience than could physically fit in the hall, not to mention a more intimate view than from just about any seat in the house.

"You're looking at it through a screen, but you're also not 100 feet away in a concert hall," Rudel says. "There's a trade-off here."

And from the Bayerische Staatsoperin Munich, pianist Igor Levit offered a lucid, liquid delivery of Beethoven's Diabelli Variations beneath a single spotlight to an empty theater. (This happened in between Levit's own daily performances on Twitter.)

All music is metaphor - that's part of its power to unite listeners across space, time and language - but these new views of the classical stage through the protective lab glass of a laptop feel especially loaded. When classical institutions are struggling - even in healthier times - to fill seats, these haunting (and often hauntingly beautiful) performances highlight both the fragility of the ecosystem that sustains this music and the resilience and fortitude of those who work tirelessly to preserve and perform it.

For Stephen Marc Beaudoin, the executive director of the Washington Chorus, who has already had to cancel proposed live-stream alternatives - choruses, it turns out, count as large gatherings - these short-term solutions can carry us only so far. "We're doing Beethoven's Ninth with the National Symphony in June," he says, "and I want to make sure we've got 128 really healthy singers that can do that show."

But still, this migration to the virtual has its own virtues - offering anyone with a connection the chance to feel connected, even as we shelter in place.

"The unknown is disconcerting," Beaudoin says. "But I do take solace in the fact that all of us in the world today are dealing with the unknown together."