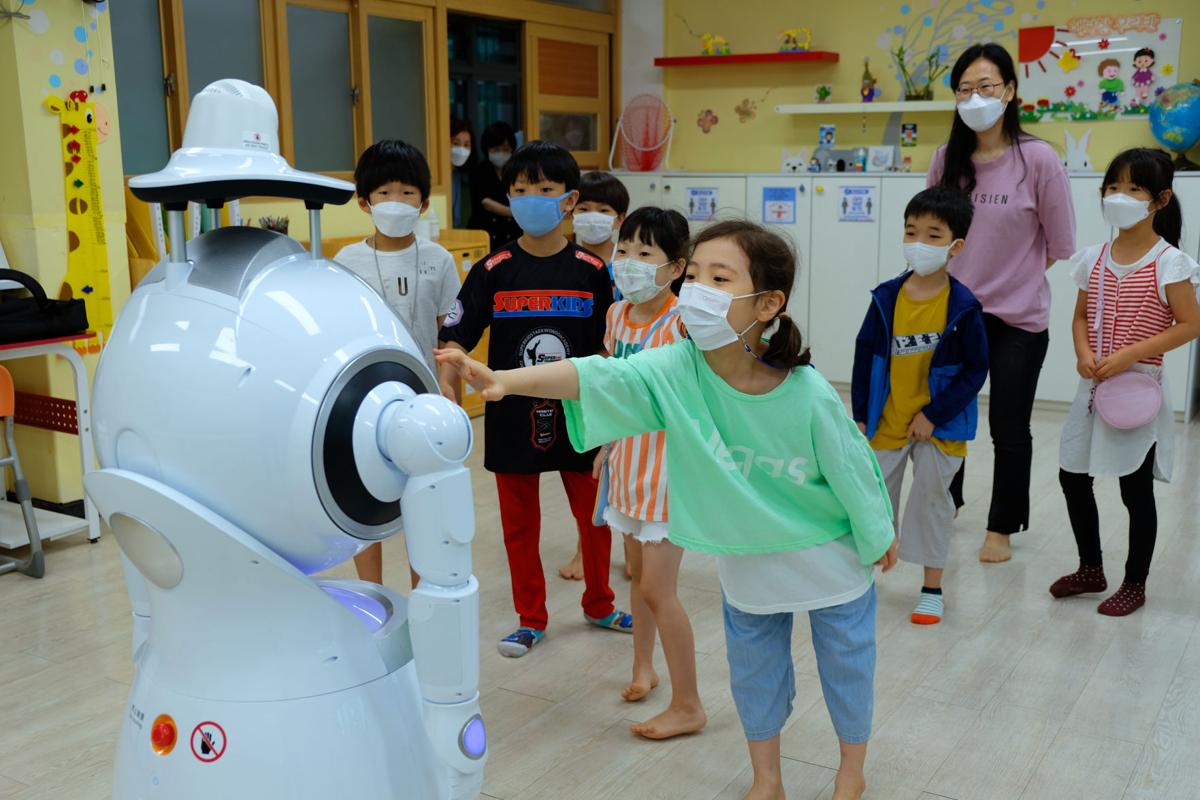 A FRIEND TO DANCE WITH: Students practice dance moves with a robot at Wooam Elementary School in Seoul. Min Joo Kim/The Washington Post 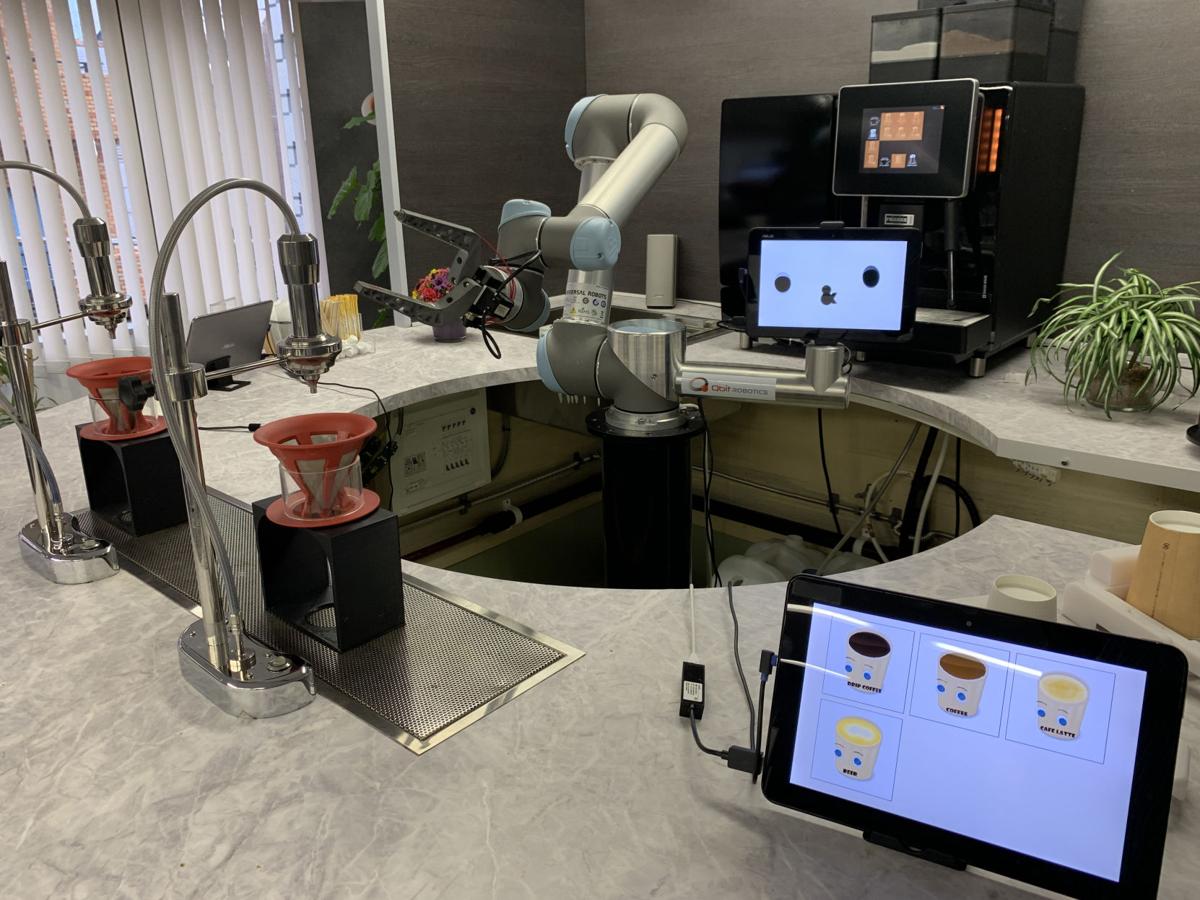 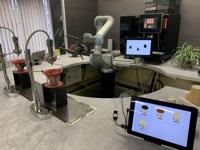 A ROBOT BARTENDER: A robotic bartender that can make coffee or mix drinks is shown June 18, 2020, in the offices of Qbit Robotics in Tokyo. Simon Denyer/The Washington Post 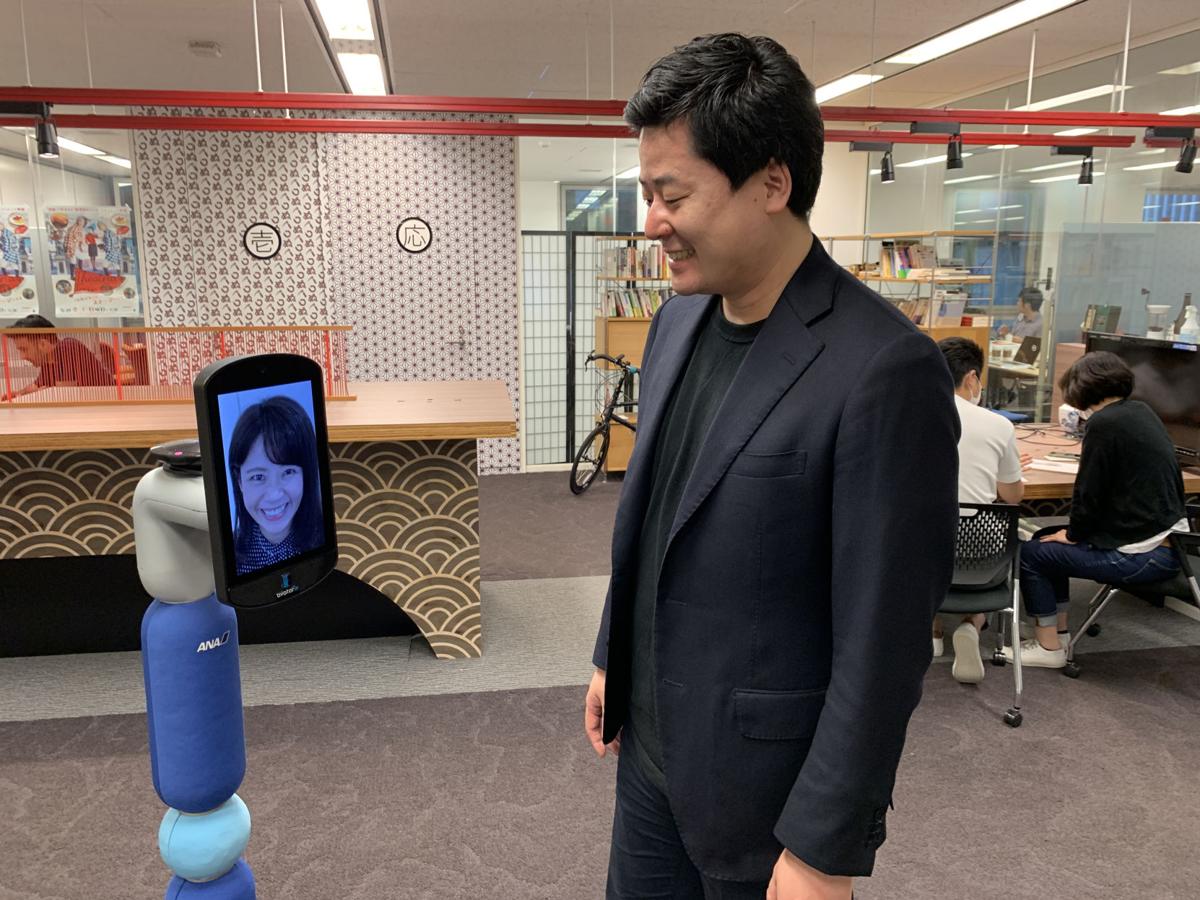 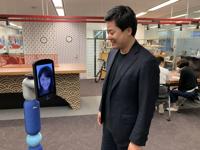 MEETING FRIENDS: Akira Fukabori, founder and chief executive of Avatarin, demonstrates his company’s “newme” robot avatar by chatting to a colleague in Tokyo on June 18. Demand for avatar robots has grown since the novel coronavirus spread around the world, the company says. Simon Denyer/The Washington Post 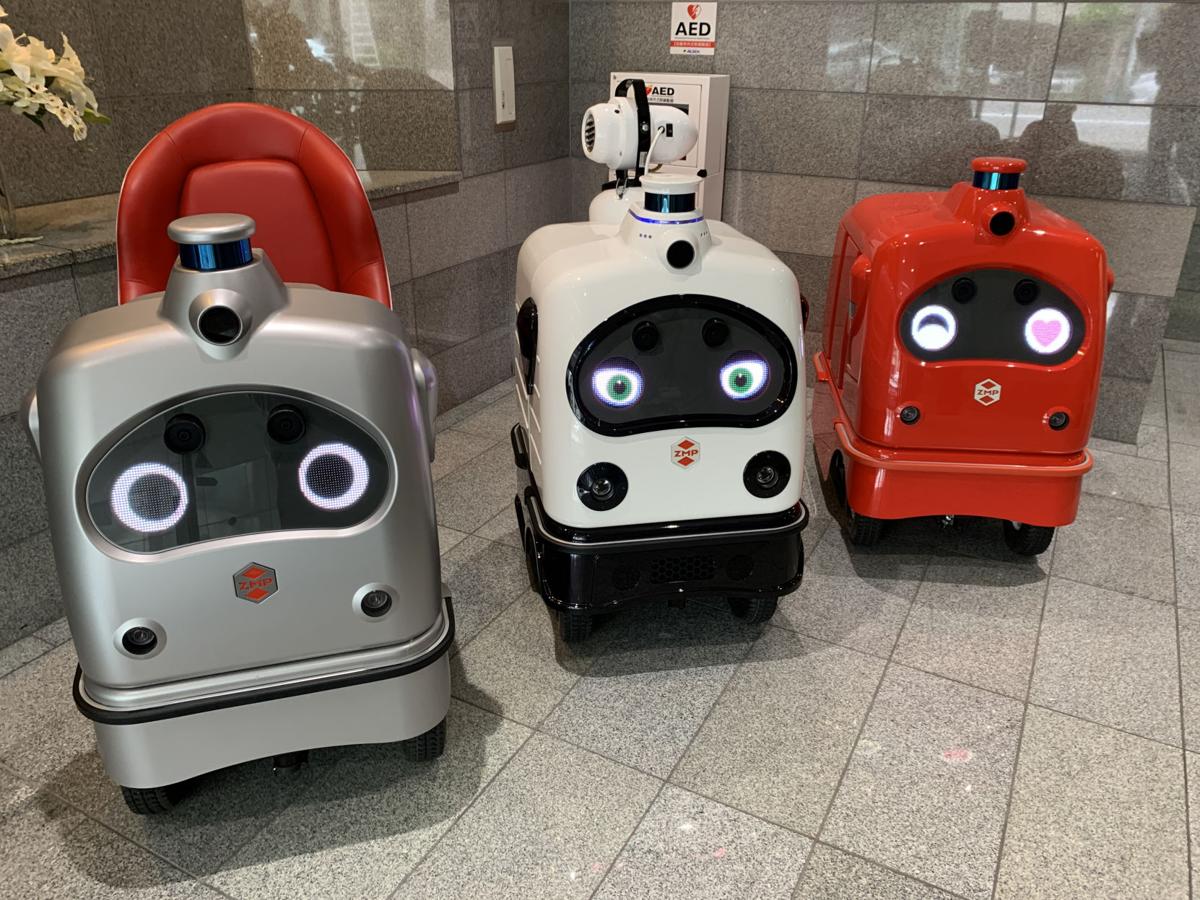 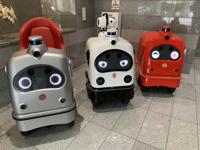 SELF-DRIVING: Three robots developed by Japan’s ZMP are seen in the company’s office lobby in Tokyo on June 18, 2020: a self-driving wheelchair, from left, a patrol robot and a delivery robot. Simon Denyer/The Washington Post

A FRIEND TO DANCE WITH: Students practice dance moves with a robot at Wooam Elementary School in Seoul. Min Joo Kim/The Washington Post

A ROBOT BARTENDER: A robotic bartender that can make coffee or mix drinks is shown June 18, 2020, in the offices of Qbit Robotics in Tokyo. Simon Denyer/The Washington Post

MEETING FRIENDS: Akira Fukabori, founder and chief executive of Avatarin, demonstrates his company’s “newme” robot avatar by chatting to a colleague in Tokyo on June 18. Demand for avatar robots has grown since the novel coronavirus spread around the world, the company says. Simon Denyer/The Washington Post

SELF-DRIVING: Three robots developed by Japan’s ZMP are seen in the company’s office lobby in Tokyo on June 18, 2020: a self-driving wheelchair, from left, a patrol robot and a delivery robot. Simon Denyer/The Washington Post

TOKYO (The Washington Post) -As the coronavirus pandemic rewrites the rules of human interaction, it also has inspired new thinking about how robots and other machines might step in.

The stuff of the bot world - early factory-line automation up to today's artificial intelligence - has been a growing fact of life for decades. The worldwide health crisis has added urgency to the question of how to bring robotics into the public health equation.

Nowhere is that truer than in Japan, a country with a long fascination with robots, from android assistants to robot receptionists. Since the virus arrived, robots have offered their services as bartenders, security guards and deliverymen.

But they don't necessarily need to supplant humans, researchers say. They can also bridge the gap between people mindful of social distance - now or when the next major contagion hits.

Want to drop in on your elderly parents but are afraid of passing on a coronavirus infection? Maybe you're missing your grandchildren, and finding Zoom chats a little limiting?

The "newme" robot developed by Japanese company Avatarinis basically a tablet computer on a stand, with wheels. The user controls the avatar from a laptop or tablet, and his or her face shows on the avatar's screen.

"It's really like teleporting your consciousness," said founder and CEO Akira Fukabori. "You are really present."

Already available commercially, Avatarin's robotshave been used by doctors to interact with patients in a Japanese coronavirus ward; by university students in Tokyo to "attend" a graduation ceremony; and by fans of the Yomiuri Giants baseball team to remotely interview their favorite players after games held in empty stadiums.

There are even avatar robots that have just arrived in the International Space Station.

But it's the way the robot is already being used by families separated by the coronavirus that really underscores the heart of the technology - starting with the family of the company's chief operating officer, Kevin Kajitani, whose parents live in Seattle.

"His parents can't always come and visit their grandson," Fukabori said. "But they always access the avatar, and can even chase their grandson. And the grandson really hugs the robot."

Avatarin is part of Japan's ANA airline group, and the company has joined with the X Prize Foundation to launch a $10 million, four-year contest for companies to create more complex robots that could further develop the avatar concept.

"You need to move," Fukabori said. "This is really important, because we forget the freedom of this mobility. You can just walk around, and people will talk to you about really, really natural things. That creates human trust. That isn't as easy in WebEx or Zoom, where if you don't know each other it's really hard to keep talking."

Work is underway on prototypes that allow users to control a remote robot through virtual reality headsets and gloves that allow the wearer to pick up, hold, touch and feel an object with a distant robotic hand, with potential uses ranging from space exploration to disaster relief or elderly care.

But Fukabori said the cheaper, lightweight avatars offer more immediate and affordable uses. What sets this project apart from existing avatar robots, the company says, is the ability for users to access the robots easily from a laptop, by renting them out rather than having to buy them.

Avatarin hopes to install the avatars in more hospitals and in elderly-care centers, shops, museums, zoos and aquariums. The company also aims to have 1,000 in place for next year's Tokyo Olympics.

A delivery robot aims to transport goods ordered online from local warehouses to customers' doors; a patrol robot, with six cameras, does the job of a security guard; a self-driving wheelchair can be programed to take users to specific destinations. The wheelchair is already available and approved for use on Tokyo streets. The others still await official permission to venture out alone in public.

Now, the patrol robot has been adapted so it can also disinfect surfaces as it patrols, and is attracting interest from Tokyo's Metro stations as well as other businesses.

In May, Prime Minister Shinzo Abe noted surging demand for unmanned deliveries and pledged to carry out tests to see if delivery robots were safe to use on roads and sidewalks by the end of the year.

Even the self-driving wheelchair can come into its own amid a coronavirus-filled world, the company said, potentially helping elderly people move around more independently without a helper who might be a vector for the virus.

Qbit Robotics, also in Tokyo,has programmed a robotic arm and hand to interact with customers and serve them coffee, mix cocktails or even serve a simple cup of instant pasta.

President and chief executive Hiroya Nakano said he aims not to replace human interaction but to supply robots that can communicate and entertain in a "friendly" way.

While robots can sometimes seem disturbing and alien to Westerners, they tend to be seen in a more welcoming light by many Japanese people, Nakano said.

"Until now, expectations have been high for what robots can do in the future, but they haven't been able to do what humans do," he said. "But now we are living with the coronavirus, the idea of no contact or automation has become especially important. And I feel there is an extremely high expectation for robots to meet that demand."

And one can dance, too

In South Korea, a Chinese-made robot is already greeting children in Seoul's schools as they reopen.

The Cruzr, with eyes that beam a neon-blue light and a video screen on its chest, takes kids' temperatures and reminds them to follow anti-virus rules.

Chinese robotmaker UBTech launched Cruzr in 2017 as a humanoid service robot for businesses, but the pandemic has given it added value as a personal assistant free from infection risks.

Before the robot came to school, teachers had taken kids' temperatures as they arrived, creating long lines and raising infection risks from human contact. Now, the robot checks the temperature of multiple students as they walk by and immediately sounds an alarm if anyone has a fever.

"At first, students were ill at ease with the robot greeting them at the school gate, but in a matter of weeks, students have embraced it as part of the school community," said Yoo Jung-ho, head of Wooam's science department.

At the school, students waved toward the robot at the gate as they walked into the school, and nodded in agreement when it reminded them about the mask rules.

"Of course, robots can't replace teachers at classrooms yet, but there is significant and rising potential for 'contactless' teaching with the pandemic," Yoo said.

Nine-year-old Lee Hye-rin says she "befriended" the robot after they danced together.

"When I first saw the robot standing in place of our teachers greeting us at the entrance, I found it cold and disorienting," Lee said. "But this robot is actually the same height as I am and also displays goofy dance moves, and I realized I can befriend him and share a fun time."

But Lee feels the robot is not so friendly when it orders her to wear her mask properly.

"If I fail to follow the mask rule, my teacher's warning will be followed with a smile telling me to behave better in the future, but the robot doesn't smile when it warns me about the mask," she said.