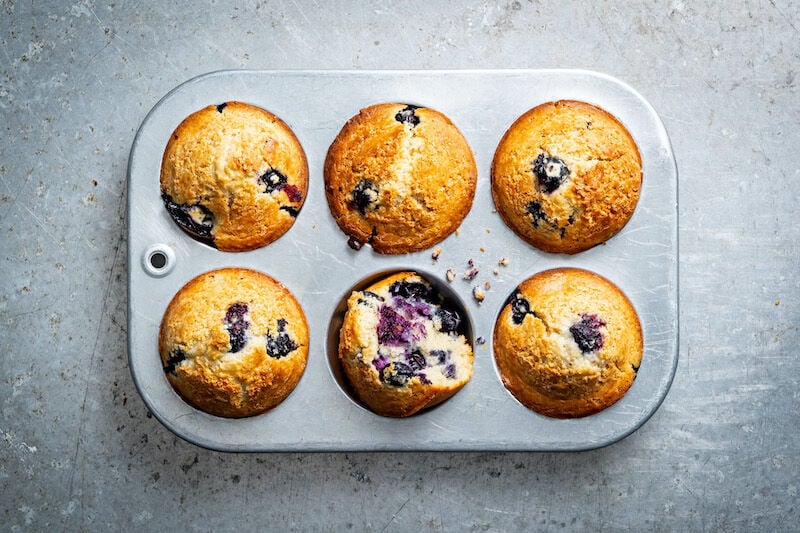 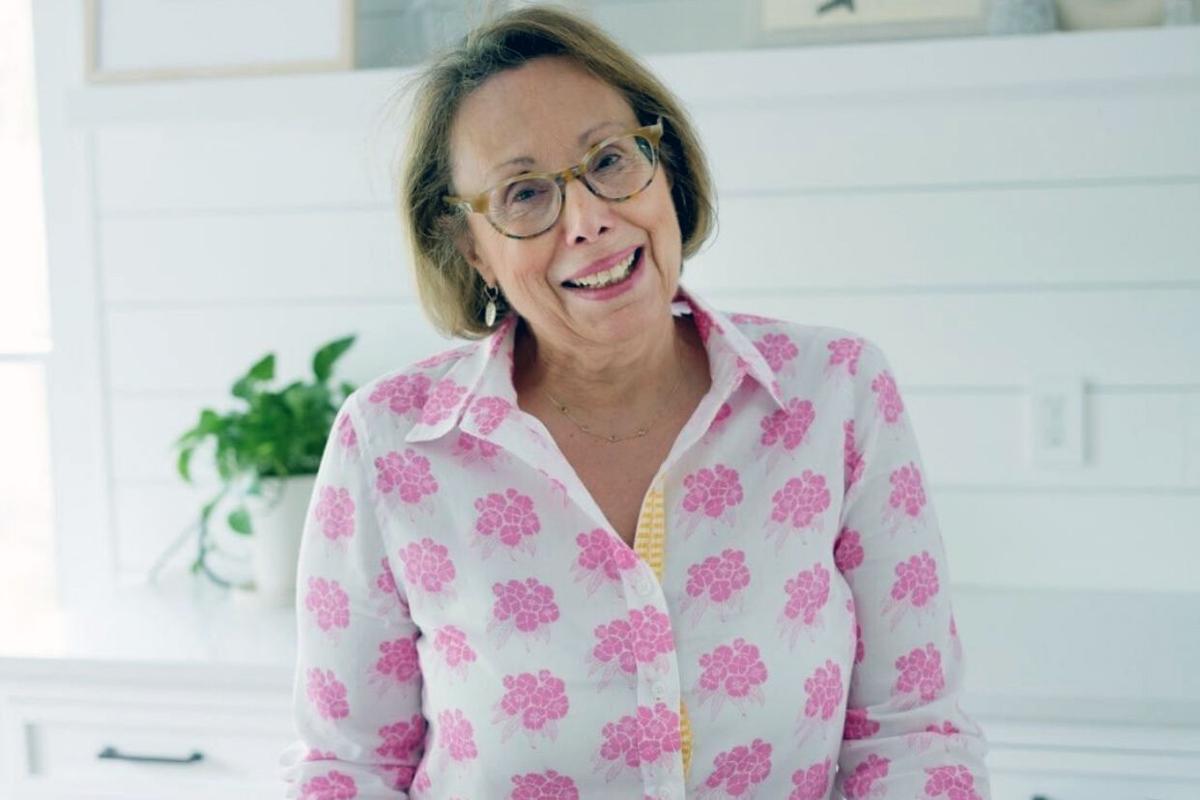 TIKTOK: Barbara Costello, known to her followers as Babs, in her daughter's kitchen inspired this variation of a three-ingredient blueberry muffins. Photo by Julia Dags

These days, there's no shortage of recipe sources, be it newspapers, blogs, cookbooks, magazines, Instagram or TikTok. Many promise simple and delicious recipes or seemingly ingenious kitchen hacks. When I see a simple recipe that promises greatness, my default reaction is skepticism. But here's the thing: When that recipe comes from a grandmother figure, I stop and listen. Grandmothers are wise. They're kind. They're inherently no-nonsense.

So, when you find a recipe for a three-ingredient blueberry muffin recipe from a woman dubbed TikTok's favorite grandma, you pay attention.

Barbara Costello, or, Babs, as she's affectionately known to her 160,000 Instagram and nearly half a million TikTok followers, is a 72-year-old Connecticut grandmother, who exploded on the social media scene less than 18 months ago in a space where she would seem to be an outlier. Social media tends to favor the young, but Costello is charting her own course, one short video at a time.

Her path to TikTok stardom began when she moved in with her daughter, Liz Ariola, a lifestyle blogger behind the site Mrs. Nipple, who was expecting her third child. Ariola was determined to break into TikTok and asked her mom to record a few videos, so Costello reluctantly posted a recipe for sheet-pan Greek chicken and potatoes. When the video received more than 100,000 views, Ariola encouraged Costello to post more, sharing family recipes as well as life and kitchen wisdom.

As her number of followers swelled, so did her reach. This year, she appeared on "The Drew Barrymore Show" and participated in a 2021 Summersalt swimwear campaign, which focused on inclusivity and body positivity, and included her daughter, who is pictured nursing her baby.

"We did [social media] on a lark and it snowballed," said the grandmother of eight and mother of four. "I don't have a business plan. This is very spontaneous to me. I'm not a media guru. I have a hard time negotiating a computer."

Costello says her daughter's demographic research found that most of her followers are between 20 and 40 years old, and she thinks many see her as a mother, or grandmother, figure. She regularly gets messages from people who have recently lost their own mother or those whose relationship with their moms has been fractured.

"I think people are hungry for connections, for the safety of home, safety of family - and maybe with me, they feel safe," she said.

I don't remember how I first stumbled upon Costello's Instagram account, but I immediately felt that connection she refers to.

She's like that funny, approachable, no-nonsense neighbor who gives you great advice over the backyard fence. What made me want to stick around was how unrehearsed Costello seemed, her prominent Chicago accent included. Her practical tips made me realize I had a lot to learn from her.

Along with recipes, Costello's various short video segments - such as Babs's Hacks, Slice of Peace, Did Your Mother Ever Tell You - are delivered in a clipped and relaxed way. Among the lessons I've learned from her: How to check on the amount of propane left in a tank (use warm water), how to stop family arguments before they happen ("Acqua in bocca," which Costello learned from her Italian grandmother), how to keep Popsicles from dripping all over (cupcake liners), and a mantra ("Don't put it down, put it away") that helps me keep my house organized.

When I spied these three-ingredient blueberry muffins made with ice cream, I knew I had to try them. The idea of using ice cream is smart; it's essentially your premade base: dairy, egg yolks and sugar. (My husband's grandmother makes her annual holiday-time strudel using a dough that contains ice cream.) With the addition of self-rising flour and blueberries, your batter is ready for scooping and baking.

I tracked down the 1982 Southern Living cookbook that was the source of Costello's recipe. I'm a tinkerer by nature, so I tweaked the proportions for an airier batter and a more tender crumb. I also added a little lemon zest and sprinkled the tops of my unbaked muffins with demerara sugar, which technically, made them five-ingredient muffins, but with these two - strictly optional - additions, a very good muffin became excellent. So good, my 6-year-old proclaimed them to be the best he's ever had.

The simplicity of this little muffin recipe is emblematic of Costello's approach to life and of her appeal. (Her most popular recipe to date is a four-ingredient dump-and-bake pizza casserole with more than 1.1 million views.) Her recipes may not be your ideal versions of dishes, but they are simple, straightforward and great for harried parents or new cooks.

Costello doesn't sweat the small stuff and she doesn't want you to either. Make muffins and let life unfold. "I always say there are no coincidences. . . . For some reason, I was supposed to stumble on TikTok, do a couple of videos and find out that a lot of people are being fed. I'm feeding them food, and I'm also feeding them in other ways."

These three-ingredient blueberry muffins rely on ice cream for moisture, richness and sweetness, and are as fun to make as they are to eat. The addition of lemon zest and turbinado sugar is optional (and technically makes them five-ingredient muffins), but they elevate the end result. We preferred the muffins made with egg yolk-based ice cream (a.k.a. French custard) - the muffins had a more tender crumb - but the yolk-free (Philadelphia-style custard) works well if you need to avoid eggs. This recipe makes 6 muffins, but it's easily doubled.

Storage Notes: The muffins are best the day they're made, but can be stored in an airtight container at room temperature for up to 2 days. Reheat in a 350-degree oven until warm.

NOTES: Make sure when you soften the ice cream, it is scoopable, but not becoming ice cream soup. Smooshing solid ice cream with a wooden spoon will help achieve the right consistency.

We had success making a gluten-free version of these muffins using Bob's Red Mill Gluten-Free 1-to-1 Baking Flour. If making these muffins gluten-free, add 15 minutes of baking time and be sure to let the muffins cool for at least 2 hours before serving (this helps make them less gummy).

We did not like a vegan version of these muffins made with dairy-free ice cream; the crumb fell apart and the texture was disappointing.

If you can't find self-rising flour, you can make your own with the related recipe.

Position a rack in the middle of the oven and preheat to 375 degrees. Grease a muffin tin with nonstick cooking spray or line with muffin liners.

In a large bowl, using a wooden spoon, soften the ice cream until it is the consistency of soft serve, then combine it with the flour and lemon zest, if using, until mostly incorporated (few bits and bobs of flour is OK). Gently fold in the blueberries, working to distribute them evenly but trying to not crush them. The batter will be very thick.

Portion a scant 1/4 cup of the batter into each well of the muffin tin and sprinkle the tops with the turbinado sugar, if using. Bake for 30 to 33 minutes, or until the tops of the muffins are golden and domed and a tester inserted into the center of the muffin comes out clean.

Transfer to a wire rack and let cool to warm or completely before unmolding. Eat warm or at room temperature.

Adapted from social media influencer Barbara Costello (@brunchwithbabs on Instagram), who adapted it from a 1982 Southern Living Annual Recipes cookbook.

Self-rising flour is a lower-protein all-purpose flour mixed with baking powder and salt. It's popular in many Southern baking recipes and can be found in many grocery stores, particularly in the South. If store-bought self-rising proves hard to find, it's a cinch to make at home.

Keep in mind that if using a higher protein all-purpose flour, such as King Arthur Baking brand, your crumb will be a bit tougher/sturdier than with the softer flour variety.

Storage: It's best to mix self-rising flour as you need it, as exposure to air will oxidize the mixture and lessen its efficacy. However, it can be stored in a cool, dark place for up to 2 weeks.

In a medium bowl, whisk together the flour, baking powder and salt until thoroughly combined.

The control of public information in Guam's public schools is concerning. Read more

Have a test-taking strategy for your next exam

All students have to take tests in school. In some classes, there may be only a few tests each semester while in others tests are given every … Read more