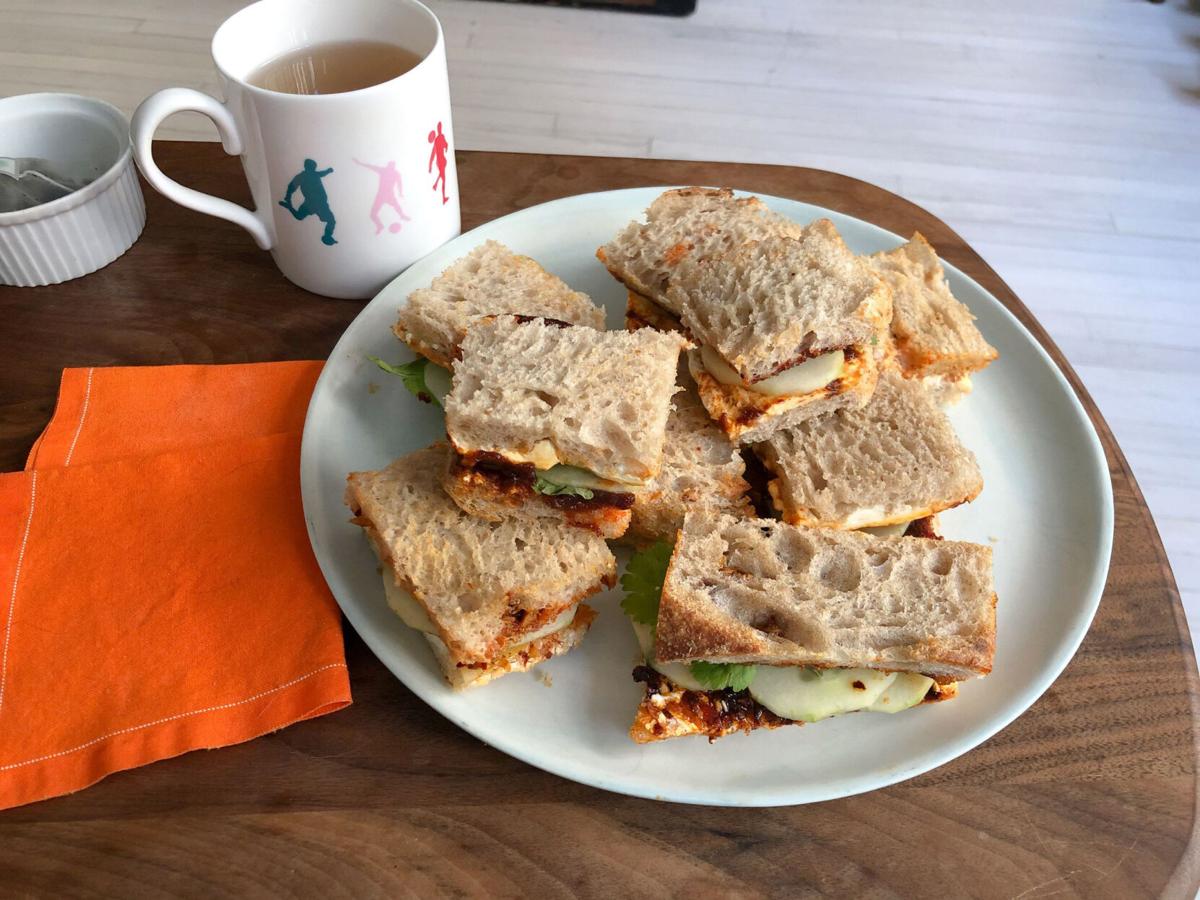 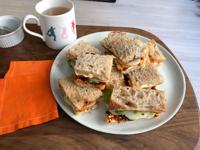 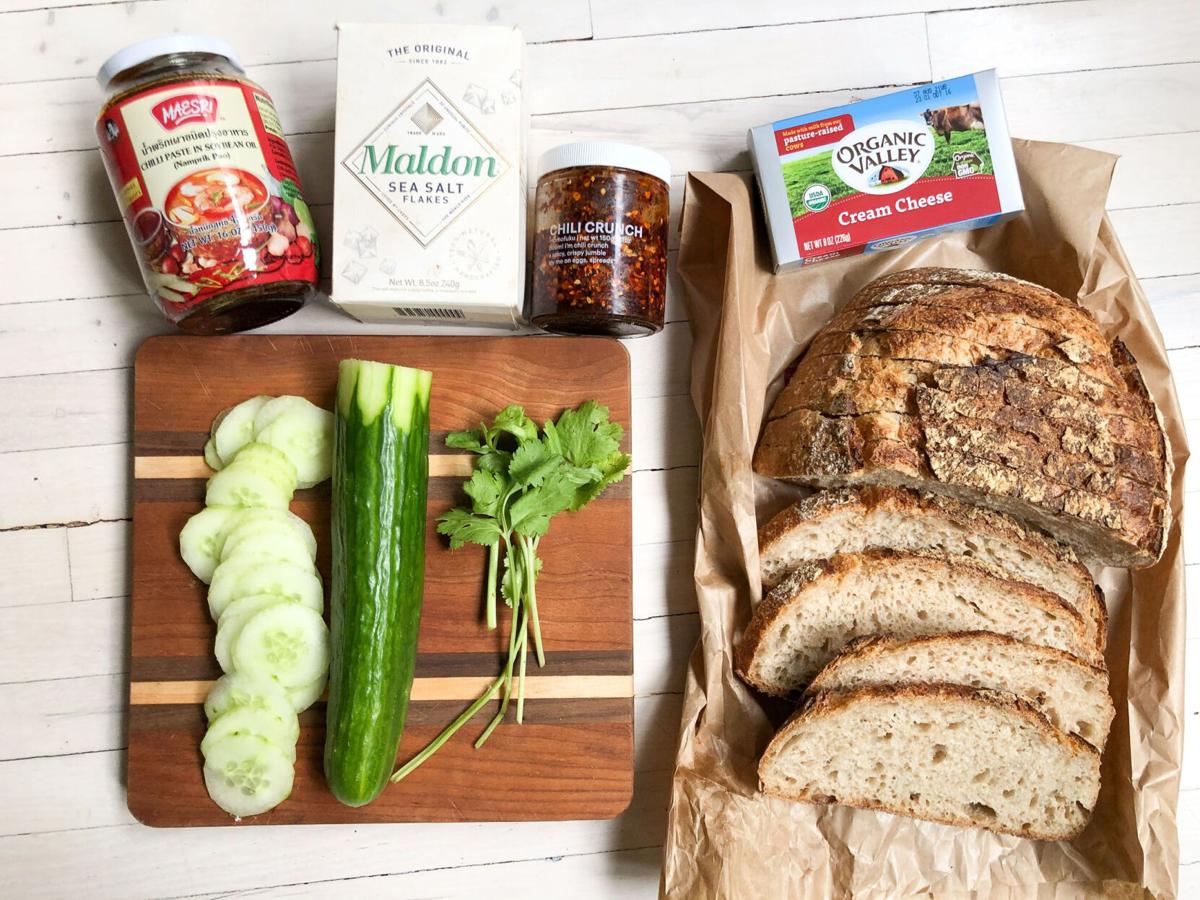 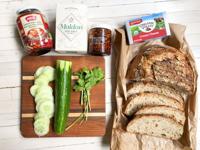 It's a food that doesn't dominate conversation outside "The Great British Baking Show" circles. The dainty squares or triangles wouldn't rank high on a list of power sandwiches, standing a fraction of the height of a triple-decker club and without an obsessed-over filling like fried chicken.

But the tea sandwich represents much more than its diminutive stature suggests. Creating a good one requires expert skill. Because there are so few ingredients, it's imperative that they are in harmony. The snack is also the backbone of one of the great, unsung power meals for women of all ages: afternoon tea. Think of the all-important conversations that have taken place in the almost 200 years since it was first introduced.

Place the bread slices on the counter. Divide the cream cheese evenly among three of the bread slices – use as much as you need so there's a good blanket on the bread. Spread the chili jam onto the other three slices. Top the cream cheese side with cucumber slices, a few sprigs of cilantro, and a sprinkle of salt. Place the slice with chili jam on top and gently press together. Trim off the crusts (see note, below) and cut each sandwich into thirds crosswise. Place on a fancy platter and serve with your favorite tea.

Tester's notes: Those delicate sandwich squares are not as easy to achieve as Teigen makes them look; chili jam gets messy. When slicing, use a very sharp knife so the sandwiches don't compress as you cut. You can also add the cucumber slices after the bread has been cut up.

While cutting off the crusts of the bread is a must, that doesn't mean you have to throw those scraps away, Teigen says. Toast them in the oven for a few minutes until crunchy, then grind them in a blender and voilà, instant breadcrumbs.

Pepper Teigen knows the power of a tea sandwich. The Thailand native is best known as the mother of social media star Chrissy, the one who instilled in her daughter that high-energy love of food. In her new tome, "The Pepper Thai Cookbook" (Penguin Random House; $30) the elder Teigen has put together recipes with varying degrees of Thai influence, from a classic green papaya salad (som tum) and sour sausage to lesser-known moo ping, or grilled pork skewers.

She also remakes American dishes with Thai influences to great effect. In the book's intro, Chrissy remembers watching her mom cook: "She was not your typical Suzy Homemaker – she wore crazy '80s prints in the kitchen instead of a traditional ruffled apron." Chrissy says "she didn't cook American food until she came here, but she did her best to learn so she could make meals that her American family would love."

That hybrid energy means she can make a Thai steak salad using leftovers from a dinner that Chrissy and her husband, musician John Legend, ordered from their local steakhouse. And she can also adapt her country's famed meat salad, larb, into burgers served on a bun with soy garlic mayo.

She created her tea sandwiches for her 5-year-old granddaughter, Luna, who adores cucumbers. "She would have them every day. We eat them at least once a week," says Pepper Teigen over the phone. "We always have it with tea. Luna loves chrysanthemum tea."

In the book, Pepper Teigen writes that besides being celebratory, they also are "the one-handed bites when nails are being painted or emails are being answered, basic-easy appetizers that look fancy when arranged on a tray." And if you're opening the door to entertaining more, they're an easy nibble to throw together for guests.

She points out that while tea sandwiches welcome a wide array of filling, the ones that work best involve something salty, something creamy, and something crisp. Here, she amps up the classic combo of cream cheese, sliced cucumber and soft white bread with Thai chili jam, or nam prik pao chili paste, and a few cilantro leaves.

"It's the best two-bite sandwich ever," says Pepper Teigen.

The addition of the sweet, spicy, and pungent oily jam is remarkable: It gives the sandwich a caramelized, savory bite that usually comes from a sauce that someone labored hours or days to make. It's dynamite with the silky cream cheese, and the cilantro provides freshness.

It's worth finding Thai chili jam, a condiment whose ingredients include garlic, dried shrimp, and tamarind paste. It's available in Asian markets and by mail order. Pepper Teigen includes a recipe for one in her book. But you can also use the more widely available and hugely popular condiment chile crisp. The flavor will be a bit spicier and not so sweet, but you're still enlivening a dish that was great to begin with.