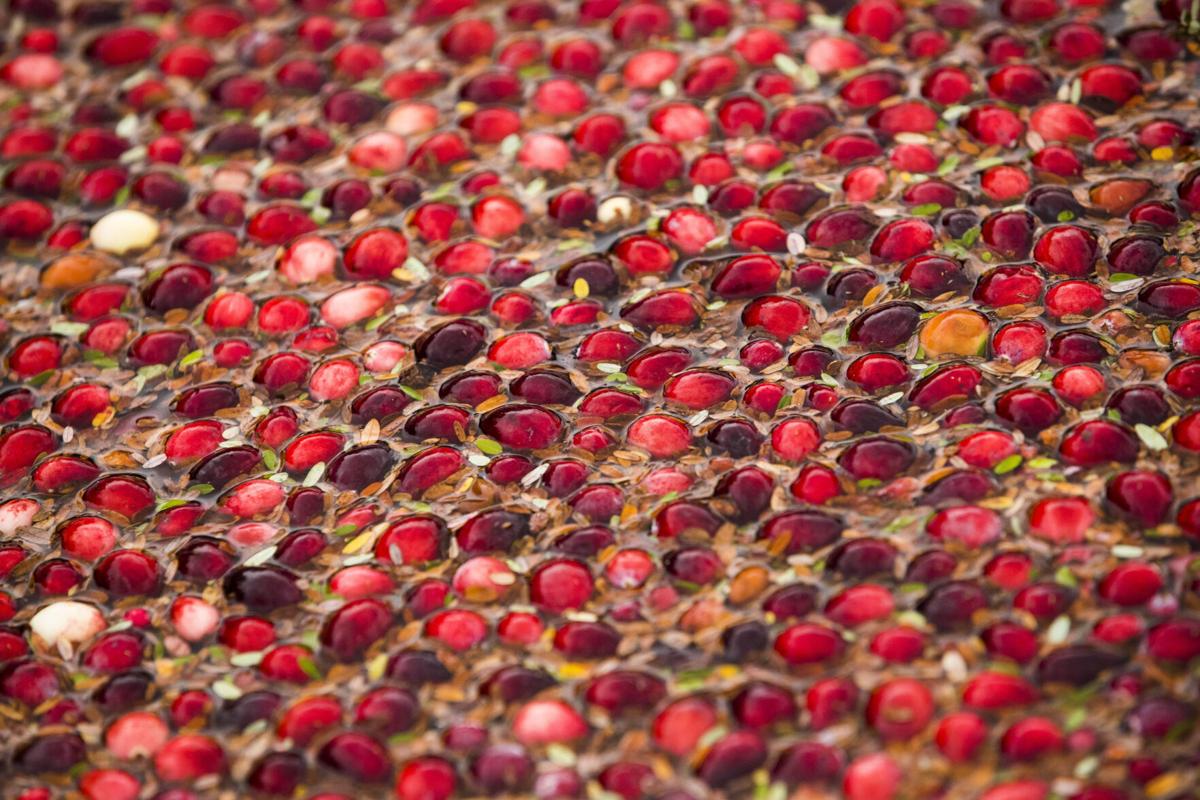 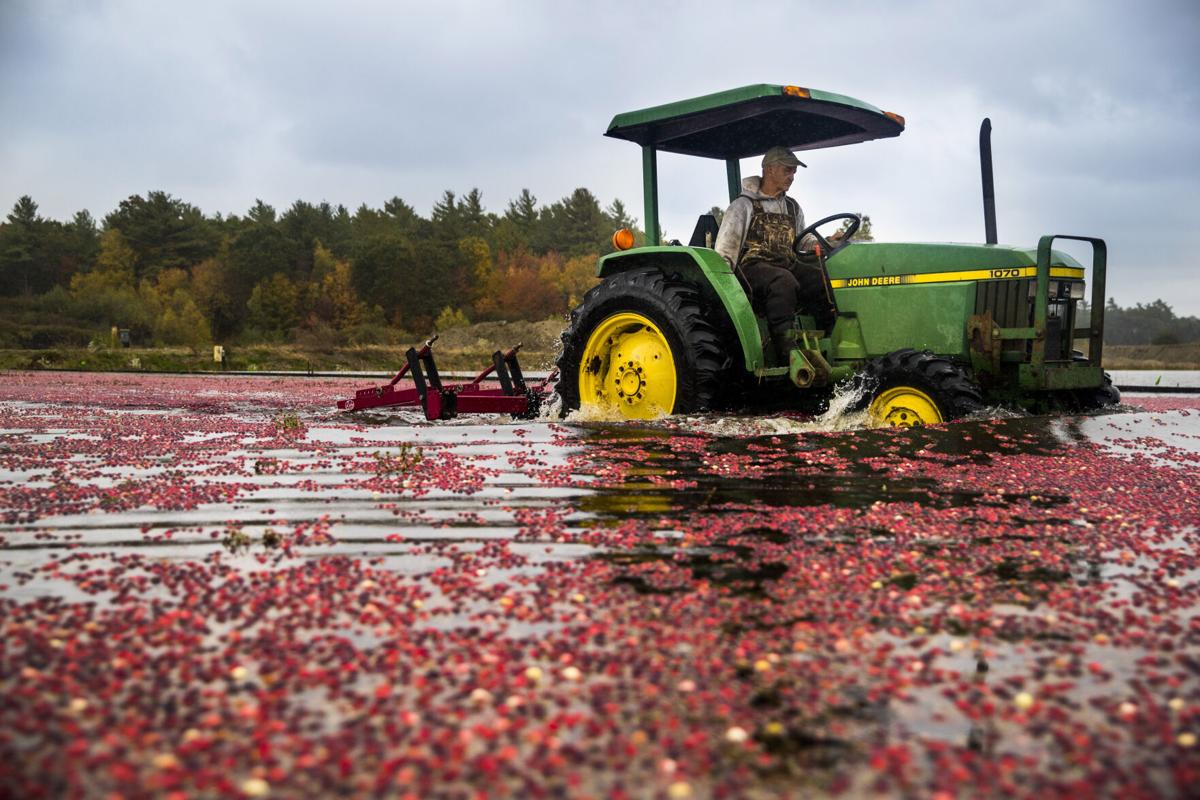 'A VERY STRONG DRIVE': Billy McCaffrey drives his tractor equipped with a device to loosen the cranberries so they can be harvested in the bog at Spring River Farm in East Taunton, Mass., on Oct. 16. Adam Glanzman/For The Washington Post 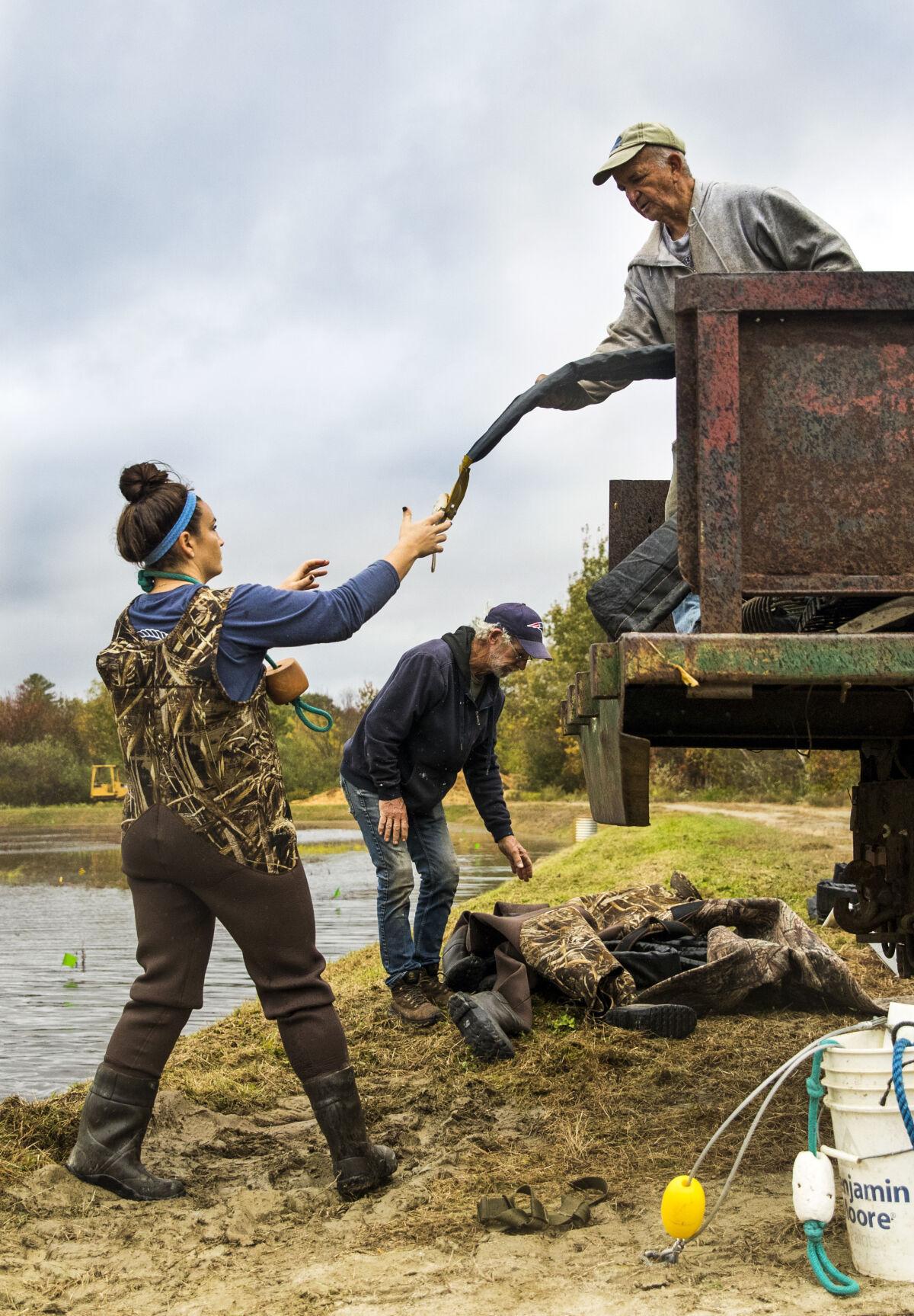 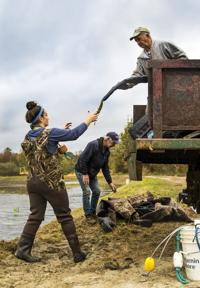 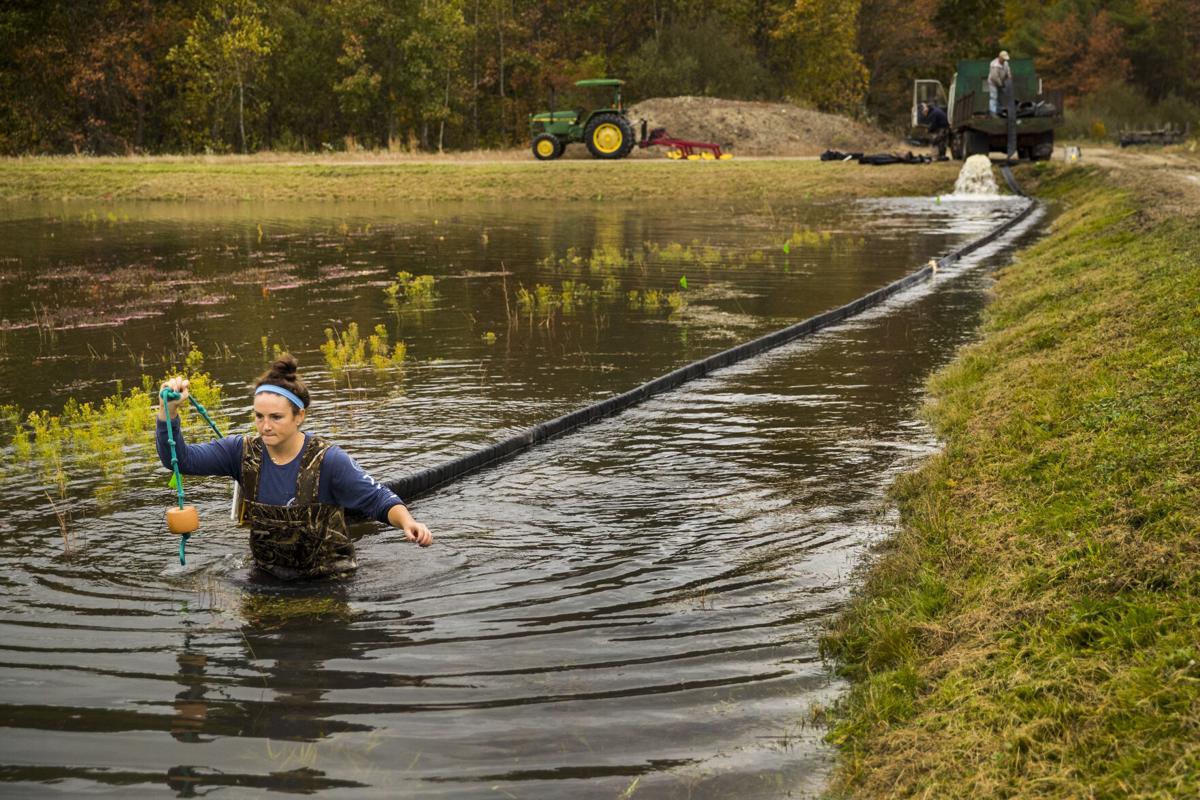 IN THE BOG: Sarah McCaffrey pulls a long hose used to corral the loose cranberries in the bog at Spring River Farm in East Taunton, Mass., on Oct. 16. Adam Glanzman/For The Washington Post 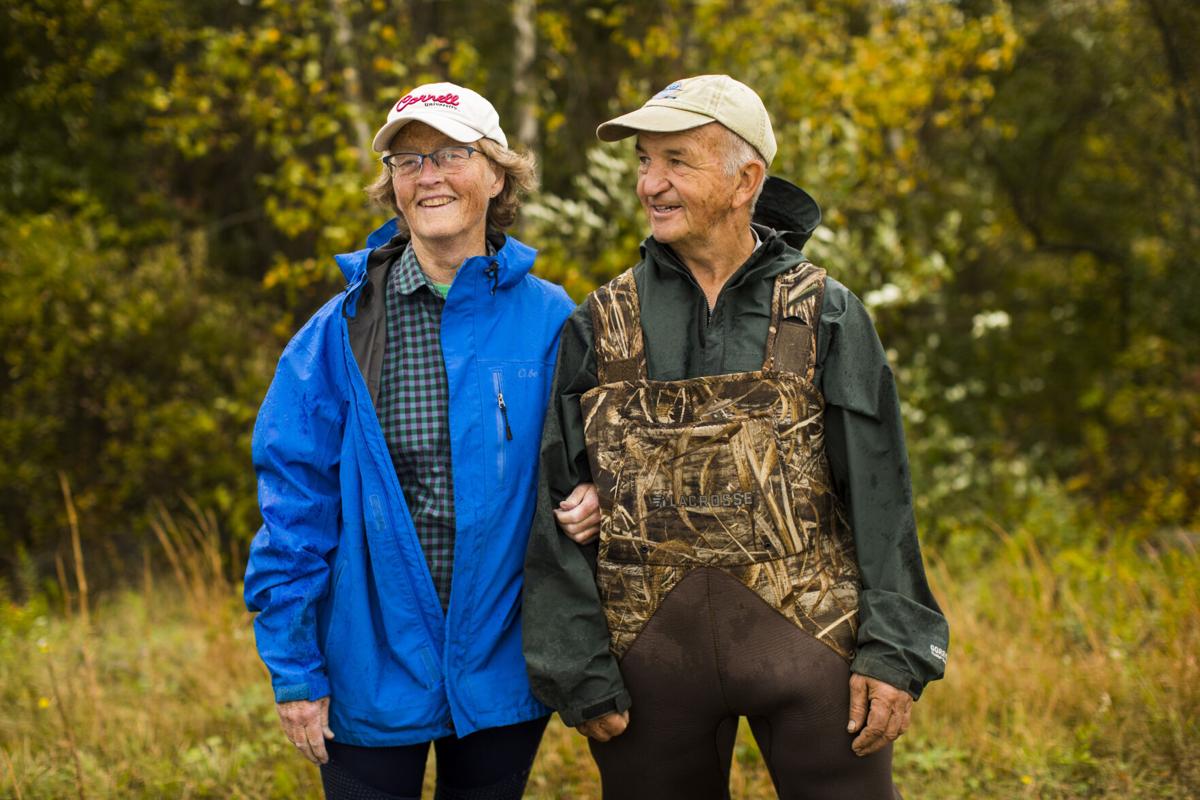 MARY AND BILLY: Mary and Billy McCaffrey pose for a photo at Spring River Farm in East Taunton, Mass., on Oct. 16. Adam Glanzman/For The Washington Post

'A VERY STRONG DRIVE': Billy McCaffrey drives his tractor equipped with a device to loosen the cranberries so they can be harvested in the bog at Spring River Farm in East Taunton, Mass., on Oct. 16. Adam Glanzman/For The Washington Post

IN THE BOG: Sarah McCaffrey pulls a long hose used to corral the loose cranberries in the bog at Spring River Farm in East Taunton, Mass., on Oct. 16. Adam Glanzman/For The Washington Post

MARY AND BILLY: Mary and Billy McCaffrey pose for a photo at Spring River Farm in East Taunton, Mass., on Oct. 16. Adam Glanzman/For The Washington Post

EAST TAUNTON, Mass. — Billy McCaffrey trawled his hands through the cold, clear water, creating a small wake in the calm. Below the surface, the flooded vines of the cranberry bog looked like a Christmas tree garlanded with shining red bulbs, pressed up close against a window pane.

He pulled up a cranberry and popped it into his mouth. The shock of sourness, which twists and wrenches the faces of the uninitiated, barely produced a pucker.

McCaffrey, 68, and his wife, Mary, 73, have been growing cranberries on their farm for more than 30 years.

More extreme heat in summer, warmer winters with less ice, and significant fluctuations between heavy rain and drought are taking a toll on cranberry plants here, where many of the plants are 100 years old or more. Farmers are employing new technology and altering some traditional practices to keep alive a fruit that dates to native tribes and has been associated with this state since the first Thanksgiving in Plymouth.

All farming, dependent on weather and climate, retains some element of unpredictability. But what many are seeing now is outside the range of experience.

"There was never a 'normal' growing season, but there's really no normal now," said Brian Wick, the executive director of the Cape Cod Cranberry Growers' Association, a statewide organization. "It's the hottest this, and the driest that, and that's what we are seeing and what the growers are tackling."

Cranberries are the state's second-largest agricultural commodity, worth about $60 million, and the industry generates more than $1 billion for Massachusetts and about 7,000 jobs.

The growers still manage to produce about a quarter of the nation's cranberries. But changes to the climate and an oversupply of berries – causing a nearly 60% decline in price over the past decade – have made it increasingly difficult for farmers to make a living.

While a warming planet is creating some stress for cranberry plants, the bogs themselves can be helpful to the environment.

For each acre of cranberry bog, growers preserve an average of about 5.4 acres of land that surrounds the bog, according to Ocean Spray, a grower-owned cooperative that represents about 700 cranberry growers in North America, including about two-thirds of those in Massachusetts. Those uplands and marshes help protect biodiversity and wildlife while the vegetation and trees capture carbon dioxide from the atmosphere and store it in the soil and wood.

Beyond the immediate impacts to the state's approximately 375 growers, many of whom work on bogs that their families have tended for several generations, the fate of this small fruit has a larger meaning for Massachusetts.

For the state's Indigenous peoples, particularly the Wampanoag Tribe of Gay Head (Aquinnah), a significant decline in cranberries would be a devastating blow to ancient traditions.

"But it's more than just the money or the fruit," she said. "It's part of who Massachusetts is."

To adapt to the changing climate, growers are marrying old-fashioned methods with modern technology – recycling more water during harvest, using sensors for more efficient and targeted irrigation, replacing ice-dependent practices, installing solar panels at their farms, closely monitoring frost and pests with the help of scientists, and planting higher-yield varieties of cranberries.

"There's no such thing as a dumb farmer anymore," Billy McCaffrey said.

Iain Ward, who grows cranberries in Lakeville, Mass., said farmers have little choice but to be good environmental stewards.

"It doesn't make sense to abuse the resource; you can't stay in business that way," he said. "We're already sustainable, to a person, but we're not doing it for the credit."

Both Mary McCaffrey and Ward said other growers are skeptical about climate change, but the trend lines are clear: The Northeast is warming faster than most of the country, with Massachusetts as the fifth-fastest-warming state in that region. This summer, there were 14 days above 90 degrees, compared with the usual nine or so, according to the National Oceanic and Atmospheric Administration.

This year, nearly all of Massachusetts, along with much of New England, faces drought conditions. East Taunton, where the McCaffrey farm is located, is under "extreme drought" conditions.

Although most growers recycle the water they use, cranberry production requires a lot of water – the plants need water to grow and then bogs are flooded for the harvest.

Irrigation does not replace rainfall, which is more uniform and penetrates the soil more evenly, said Ghantous, the Amherst scientist. Even when there is no drought, climate change is causing erratic rainfall – a stretch of heavy downpours and then perhaps nothing for weeks.

Heat waves can be especially damaging for cranberries. When it's 90 degrees outside, it can be about 10 to 20 degrees hotter in the bog, and those high temperatures can lead to a condition called scald, where the fruit is unable to cool itself and cooks on the vine.

In a kind of agricultural whiplash, cranberries are threatened not only by heat but by cold. A changing climate means cranberry plants are budding about two weeks earlier in the spring than they once did, making them vulnerable to damage from frost, Mary McCaffrey said. And abnormally high temperatures through September stretch the harvest into November, increasing the possibility of losing berries to frost and preventing them from turning from white to their characteristic red color.

"Frost is the number one killer of hopes and dreams," Ward said.

Jeffrey LaFleur, a first-generation grower in Massachusetts and vice president of cooperative development and grower relations at Ocean Spray, worries about the current drought's toll.

"Agriculture can be one of the most humbling professions you can ever have," LaFleur said. "What we're focused on is, How do you use the technology or the engineering to work with nature to be as productive as you can to ensure continuity?"

Before technology or engineering entered the equation, cranberries grew in the wild from Canada to the mountains of Georgia. Historically, they have done best in sandy acidic soils, such as those in parts of New England, which were the result of glaciers moving and melting northward, leaving kettle ponds and bogs in their wake. For thousands of years, Indigenous peoples used – and continue to use – wild cranberries for food but also as medicine.

On Martha's Vineyard, one of the most important celebrations of the Wampanoag Tribe of Gay Head is Cranberry Day, held for generations on the second Tuesday in October to celebrate the harvest.

The tribe gathered wild berries this year, though yields were down significantly because of drought, said Cheryl Andrews-Maltais, the tribe's chairwoman.

In the wild, cranberries face different challenges, she said. Weeds can rob the plants of sunlight and nutrients, and storm water runoff can bring toxins into the bogs, which the tribe's natural-resource department manages "with a gentle touch."

But many of the changes – hotter summers, less rainfall, an increasing number of powerful storms – are common threats to farmed and wild fruit.

When asked how the tribe might adapt to global warming and its effects on cranberries, Andrews-Maltais said, "Hopefully we will be able to monitor and get ahead of it. We need to really go back and see what today's science dictates and balance that with our traditional practices and our knowledge of any natural resource."

Commercial cultivation began in the United States, when Henry Hall, a Revolutionary War veteran and ship's captain, first grew cranberries in Dennis on Cape Cod in 1816. Cranberries, an excellent source of fiber and vitamin C, accompanied sailors and whalers on voyages around the world to prevent scurvy.

But in the 1990s, Wisconsin passed Massachusetts as the nation's biggest source of cranberries, producing more than half of the nation's crop. The rest is somewhat evenly divided between New Jersey, Oregon and Washington state. British Columbia, Quebec and Chile also grow cranberries.

Wisconsin's top perch is due to newer, rectangular bogs filled with varieties of cranberries that are bigger and produce greater yields. With fewer competing pressures on land and water than Massachusetts, Wisconsin now has about twice as many acres devoted to cranberries as the Bay State.

Massachusetts bogs are older and follow the contours of the landscape, which make them harder to harvest efficiently.

For farmers to pick cranberries, bogs are flooded with water and then a device – a specialized reel, or a contraption attached to the back of a tractor (McCaffrey's is called a "Ruby Slipper") – is driven through them, bumping the vines to separate the berries from their stems. Because the berries are hollow, they float, covering the surface of the water in a ruby-red mosaic.

A small fraction of cranberries are dry-harvested in a time-consuming and labor-intensive process in which they are plucked, raked or collected by machines on dry bogs. These berries are sold fresh, more of a specialty item.

Aside from the recent droughts, which have made wet harvesting a challenge, one of the biggest changes to cranberry growing in Massachusetts over the past 30 years has been a significant decline in the amount of winter ice.

Ice is especially important to cranberry production; growers would typically spread sand over the frozen surface of the bog every couple of years, in a process called ice sanding. As the ice melted, the sand would trickle down into the bog, burying old leaves, suppressing disease, reducing pests and fungi while encouraging upright stems and replenishing the sand beneath.

Without enough winter ice, growers wait until the spring and use barges to drop the sand into flooded bogs, or spread it dry, neither of which is as efficient as ice sanding, Wick said. "Winters don't really come like they have been," he said.

Ice is central in another way. In winter, bogs would freeze over naturally, and that would protect the plants. If they are surrounded by ice, they stay at 32 degrees Fahrenheit, rather than dropping to the air or bog temperatures, which can be much lower in winter and kill the fruit.

Now, with less naturally occurring ice, many growers have installed temperature and soil-moisture sensors in their bogs so if the temperature drops too low, they can flood and freeze their bogs to protect the plants.

Despite the challenges posed by climate change, the McCaffreys are pushing ahead, trying to preserve a way of life they love while feeding millions of people who may not consider the origins of the cranberry sauce on their holiday table.

"Anything to do with agriculture is stress," Billy McCaffrey said. "But survival is a very strong drive. I see what nature is doing, and what I'm doing, as a farmer, is trying to help nature."