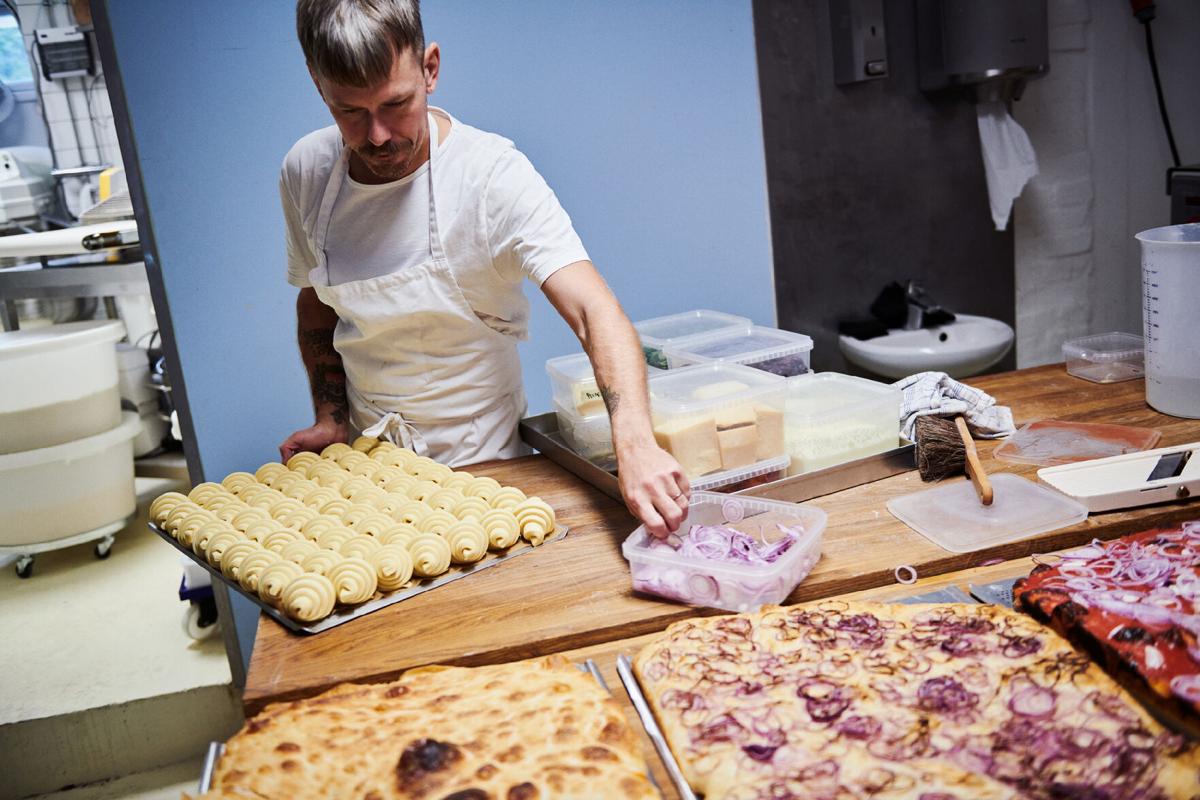 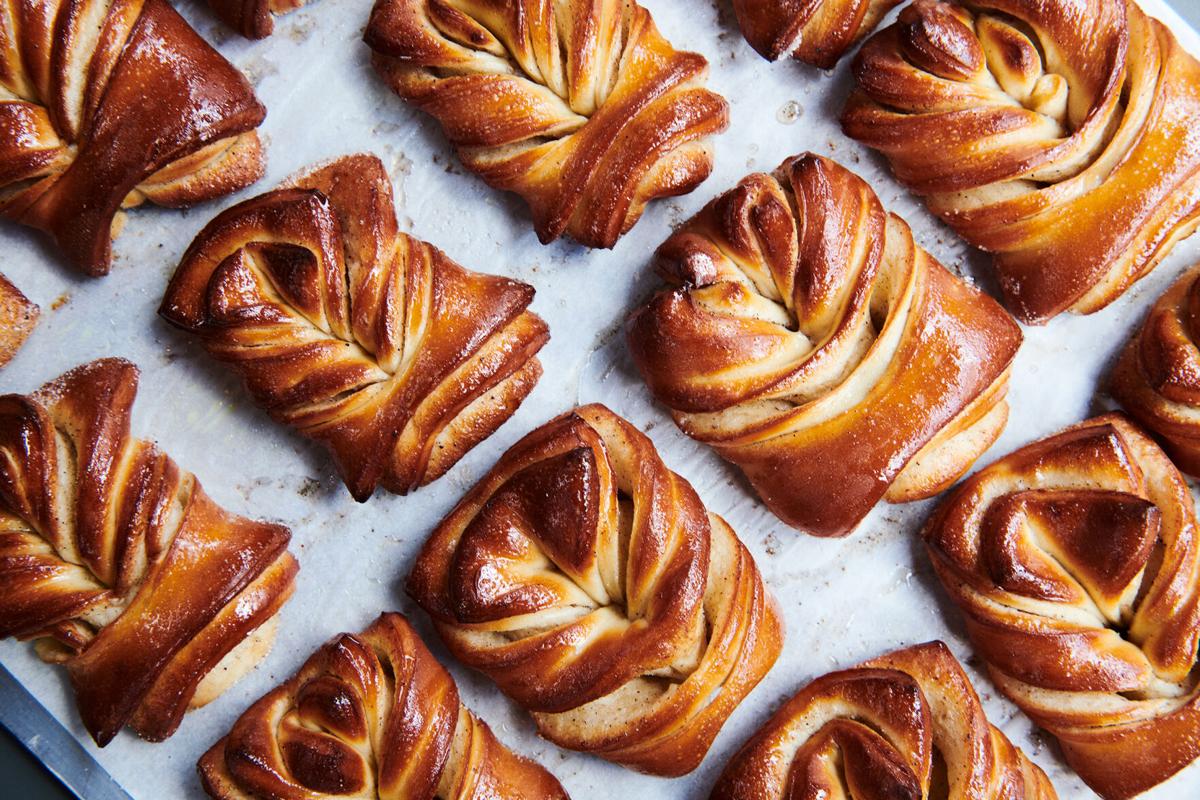 When Mirabelle bakery opened in the Norrebro neighborhood in 2016, waiting in line in Copenhagen was a novelty. If you showed up on a Sunday morning craving croissants or sourdough buns, you might find yourself in a line that occasionally stretched out the door. But now, five years later, there are lines of sleepy-eyed people craving their weekend dose of carbs all over the city, and they frequently stretch around the block.

The pandemic has played a role in that transformation. During Copenhagen's two lockdowns, bakeries were allowed to stay open, and they had thriving business as people looked for anything to treat themselves in dark times. It makes sense that bakeries might seem a safer economic choice to a young food entrepreneur. And some of the highly skilled chefs used the lockdown to reassess and trade the often stressful environment and long nights of restaurant kitchens for the bakery's more deliberate pace.

Bakeries have become a signature part of the city – and there's no better way to see them than the city's favorite mode of transportation, the bicycle. The route is long and decidedly circuitous, and let's not kid ourselves, it requires nowhere near enough exertion to justify the caloric intake. But it's a great way to see neighborhoods the average tourist might not experience, while combining two of the things Danes love most: cycling and carbs.

Richard Hart had been head baker at San Francisco's iconic Tartine for seven years before a partnership with acclaimed restaurant Noma lured him to Copenhagen. It is his loaf that has set the template for most of the sourdough that has colonized this city. His ideal sourdough has a crust that crackles like a chicharron and a taste that continually reveals its complexity. "Everything," he says, "needs to line up to get this perfect loaf of bread that I seek but never seem to find."

You could fool the Copenhageners. From the day Hart Bageri opened three years ago, locals as well as visiting foodies have lined up for its signature city loaf. Pastries change regularly, but they range from classic croissants and a cream-filled "spandauer" topped with seasonal fruit, to rich Basque cheesecake. Hart says that when he first opened in Copenhagen, the menu included fewer sweets, but he quickly learned that "Danes are confused by savory pastries." Still, one – a fennel-scented sausage roll – hangs on, and we're all happier for it.

One of several new bakeries to open in the lively, ethnically diverse neighborhood of Norrebro, Collective is owned by the same people behind Coffee Collective. After years of focusing intensely on coffee, founder Klaus Thomsen realized it was time to broaden their gaze. "As the coffee got better and better, we felt the pastry wasn't keeping up," he says.

Much of Collective's production goes to the company's coffee shops, but plenty is available behind its beautifully designed wooden counter. That includes some of the city's more unusual pastries, such as a "lemon wave," a tart and twist fashioned from croissant dough that is glazed with a lemon tea – a technique that head baker Michael Craig learned during his time as chef at the restaurant Amass.

Craig and his small team are devoted to working with local producers, which means Danish flour for everything – almost. ("We make a small exception for the croissants," he says with a wry smile. "After many months of flat ones.") The sourdough is made with wheat milled to order by a ninth-generation farmer and incorporates whole grains into the dough. The resulting loaf is slightly nutty in flavor but retains its bright acidity.

The project of Emil Glaser – a former chef at Noma and Amass – Juno opened in 2018, a few months before Hart, and quickly began attracting crowds. Its sourdough loaves, made from a blend of Danish and Swedish flours, were visually striking (topped with pumpkin seeds, or in the case of the Morning Bread, shaped in a rectangular mold that makes it perfect for sandwiches). It is also one of the few bakeries in town to offer seating, and its leafy outdoor terrace makes it a favorite spot for moms on coffee dates and breakfast-seeking tourists. And its seasonal cakes – from a very French pistachio frangipane tart to a fluffy Swedish semla, filled with fresh raspberries and cream – are swoon-inducing.

But the main reason people bike from the farthest corners of Copenhagen to the well-heeled neighborhood of Osterbro, and endure the longest lines in the city, is the cardamom bun. A Swede, Glaser was the first artisanal baker to introduce the classic Swedish pastry into Copenhagen, and his version is soft and buttery, redolent from the black flecks of cardamom and sprinkled with a bit of crunchy sugar that caramelizes into a thin shell on the bottom. It has become such a hit that almost every bakery in the city now offers its own version. Glaser is a bit amused by the bun's impact. "The city has changed from a cinnamon city to a cardamom city," he says. "It's been kind of fun to follow."

Of all the bakeries in Copenhagen, Galst feels like the biggest discovery – literally. Located in Osterbro but hidden behind the city's soccer stadium, it is difficult to find, not least because it is situated in the dining room of the team. Erik Galst worked as an accountant for 32 years before becoming disillusioned with his career, quitting his job and then baking bread for the club where his son played soccer. When the pandemic hit, he realized he had a chance to fulfill his dream of opening a bakery. He bought four ovens for the soccer-club kitchen and opened to the public in fall 2020.

Now he sells about 100 loaves of sourdough a day, along with rye bread, sandwiches, cinnamon buns and cardamom buns. Thanks to the Danish press, the neighborhood secret is no longer quite so secret. "There have been three or four (other) small bakeries open in the past few months," he says. "But the line here doesn't get any shorter."

Of all the new bakeries in Copenhagen, Rondo, located back in Norrebro, feels the most like a neighborhood spot, which is exactly how Thomas Spelling wanted it. He had long dreamed of opening a bakery to supply his wine bar, but he kept the idea on the back burner until a kebab stand that he passed daily on his way to work went out of business – another victim of the pandemic. "It's right across from a school, so there are parents there every morning dropping off their kids and picking them up in the afternoon," he says. "The location just screamed for a small bakery."

His head baker, Robert Agren, makes juicy slices of focaccia topped with seasonal vegetables, an orange-and-cinnamon-scented morning bun, crisp baguettes, rye and, of course, the Tartine-style sourdough. "Even with the latter, though, Agren detects ineffable nuances. "It's hard to say what makes each version different," he says. "Because it's so connected to the baker. Baking is a very personal thing."

Perhaps no other bakery in the city embodies the "labor of love" ethos more than Benji, which opened earlier this year. Rasmus Kristensen has held many plum jobs in baking: He was Noma's baker for a time, then left to develop recipes for a commercial bakery. He eventually struck out on his own as a consultant. He found his ideal collaborator in the form of an Italian baker named Agnese Negrini, and in May, they opened Benji, named after Kristensen's newborn son.

It is just the two of them, baking all the loaves, making all the pastries – including a vanilla-filled spandauer – and dusting the flour off their hands to man the counter every time a customer comes in. "The level in Copenhagen now is sky high," Kristensen acknowledges. which is why even though he and Negrini have immense experience between them, they have adopted something of a beginner's approach. "Every day, we open a loaf and taste it," Kristensen says. "And then we ask, 'OK, where do we want to go from here?'"

Across a couple of bridges and along the far side of the harbor lies Lille from the center of the city. Its location on Refshaleoen, the island neighborhood that has become a hub for innovative food projects, helps explain why this place is as much a community as a bakery. It's been that way since the beginning, a little over three years ago, after three friends who worked together at the Michelin-starred restaurant 108 decided to strike out on their own. The fact that Lille was crowdfunded "made all the locals feel like they had a stake in it from the beginning," says Mia Bolund, one of its founders.

Since Lille's opening, that sense of a community has only grown, fueled by the creatives who drop by for their daily coffee, the occasional weekend dinner or the monthly farmers market that the bakery helps organize. And all this while turning out a steady stream of spicy sausage rolls, sugary berliners (like filled doughnuts) and – of course – heavy loaves of sourdough.

We have barely scratched the surface of Copenhagen's bakeries. There are plenty of other greats in the area, such as Batting, which trained many of Copenhagen's bakers, and Hahnemanns Kokken, where Scandinavian culinary expert Trine Hahnemann crafts cakes and buns from organic ingredients. Alice, Apotek 57 and Democratic, all make outstanding croissants. And there are more on the way, including a bakery planned for the central food market, Torvehallerne. "I heard," one baker told me, "it will be sourdough."