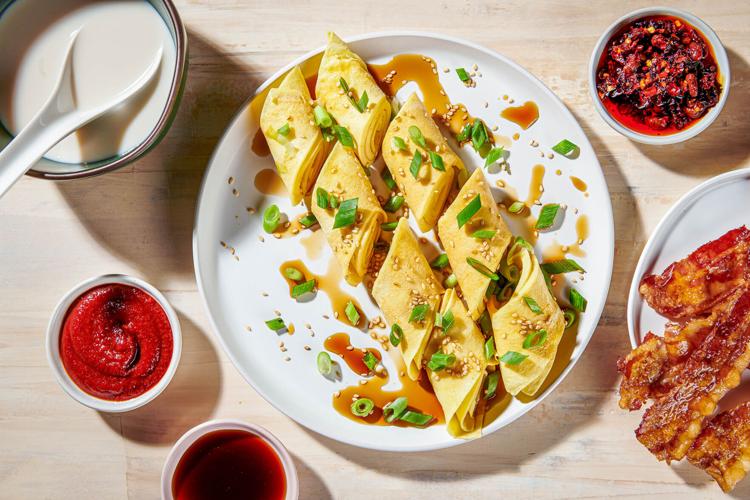 'A DOSE OF COMFORT': Hot and warming, tender and just slightly sweet, fresh dan bing are a treat. Rey Lopez/For The Washington Post 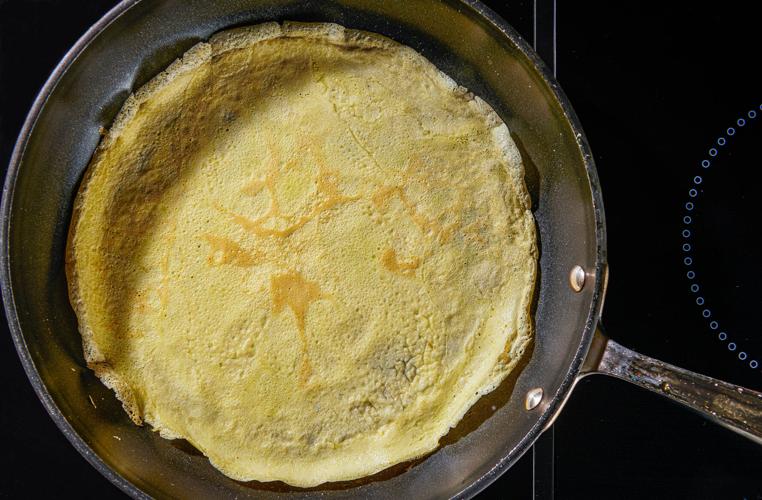 GET CREATIVE: Making the crepes. Rey Lopez/For The Washington Post

'A DOSE OF COMFORT': Hot and warming, tender and just slightly sweet, fresh dan bing are a treat. Rey Lopez/For The Washington Post

GET CREATIVE: Making the crepes. Rey Lopez/For The Washington Post

"Dan bing is quintessential grandma food to me," Frankie Gaw, author of "First Generation: Recipes From My Taiwanese-American Home" says of the egg crepes he first ate as a kid. Gaw grew up in Cincinnati, but visited his grandmother in Memphis every year around Thanksgiving. From around age 5 through his 20s, she'd make a batch of dan bing for breakfast. It was just the thing to get Gaw, who describes himself as "not a morning person," out of bed.

There'd always be a plate of the crepes, rolled into cylinders and sliced into bite-size pieces, on the kitchen table when Gaw wandered downstairs. The three-person table was always set with a knit cloth - "very Asian grandma," Gaw says. Nibbles like Chex mix, persimmons, peanuts and tiny mandarin oranges were set on and near the table.

"As I ate the first batch of dan bing - with some scrambled eggs and orange juice - my grandma would start frying another batch. I remember listening for the sizzle, waiting for the smell of the crepes to fill her kitchen, and then taking that first bite of a fresh one," Gaw says.

Hot and warming, tender and just slightly sweet, fresh dan bing are a treat, and though they're typically a breakfast food, there's nothing wrong with having breakfast for dinner every once in a while.

After he moved to the West Coast in his 20s, Gaw started making dan bing for himself. "I was wanting them after a night out, almost like a midnight snack," he says. "Plus, they're so easy."

Indeed, dan bing are easy. The batter takes a few minutes to whisk together, and then, because they're thicker than French-style crepes but thinner than American-style pancakes, each one seems to come out perfectly flat and round without much trouble. It's the kind of recipe that's easy to memorize and make for yourself early in the morning or late at night after one too many drinks.

It's also indicative of the kind of recipes Gaw features throughout his book. "First Generation" isn't a 101 course on Taiwanese food. It's more like a memoir told in recipes. "For the book in general, I wanted to feature nostalgic and sentimental foods, things you would encounter in a family members' home, but wouldn't really see in a typical big food spread in a typical food magazine," Gaw says. "This is not food you would see unless you're part of someone's family. ... These are real, everyday meals."

Frankie Gaw, author of "First Generation: Recipes From My Taiwanese-American Home," says dan bing are traditionally served alongside youtiao, which is a type of fried cruller, and sweet soy milk. Condiments like hot sauce, soy paste and soy sauce would be served on the side for drizzling over the top. Growing up in the Midwest, Gaw liked them with scrambled eggs - he says he loved eggs as a kid - and bacon; in his 20s, he'd add light beer on the side and ketchup on top - "very chaotic," Gaw says with a laugh.

In other words: Feel free to get creative. In his cookbook, Gaw suggests filling dan bing with vegetables or meats. In this recipe, soy sauce is lightly sweetened to make a drizzle for the top of each crepe, and finely sliced scallions offset the sweet and salty flavors. "They're just right for whenever you want a warm meal and a dose of comfort," Gaw says.

In addition to, or instead of, the sweet soy sauce, feel free to use any other sweet or savory sauce you'd like, such as chili crisp, honey, mustard or gochujang.

1 tablespoon grapeseed or olive oil, plus more as needed

Make the crepes: In a medium bowl, whisk together the flour and water until homogenous. Add the eggs, and whisk until smooth.

In a medium nonstick skillet over medium-high heat, heat 1 tablespoon of oil until it shimmers. Pour about 1/3 cup of the batter into the skillet and tilt it so the batter thinly coats the bottom. When the batter starts to firm up and the edges look dry, after about 30 seconds, use a thin spatula to flip it to cook the other side. If the crepes seem to be cooking too quickly, decrease the heat. Flip the crepes once or twice more until lightly browned and cooked through. Sprinkle with a little salt, then set aside on a plate. Repeat with the remaining batter, adding more oil as needed, until all of the crepes are cooked.

Make the sauce: In a small bowl, stir together the soy sauce, honey and water until smooth.

To serve, roll the crepes into tubes and cut each into 4 or 5 slices. Drizzle with the sauce, top with chopped scallions and sesame seeds, and serve.