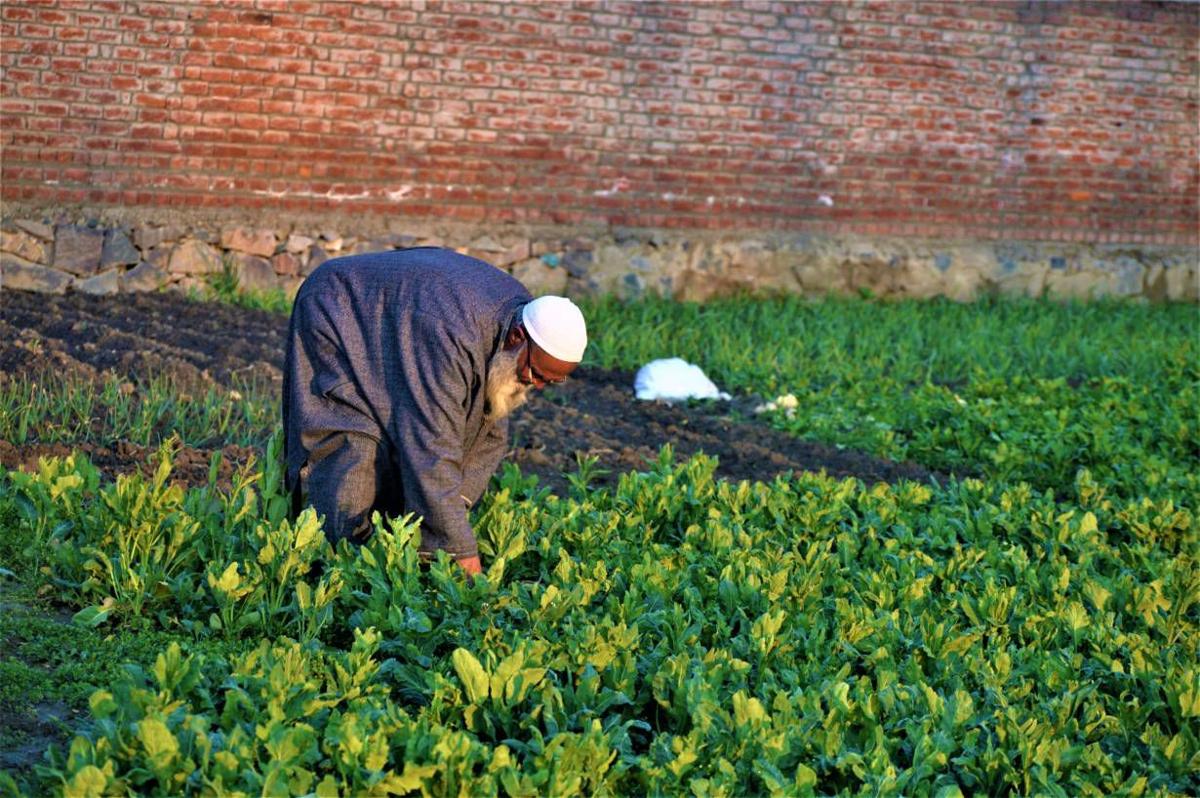 MALURA: A Kashmiri farmer tends his kale crop at his farm in Malura, near Srinagar, India, on March 13. Athar Parvaiz/Thomson Reuters Foundation 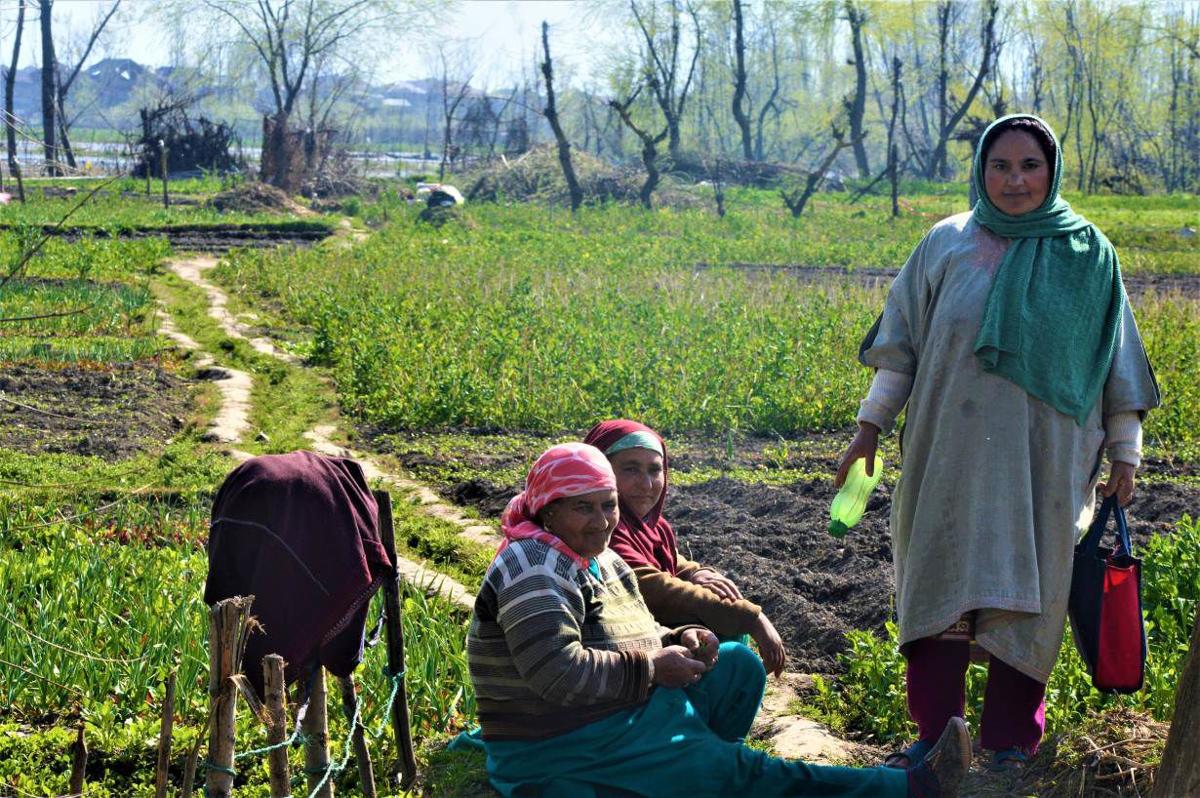 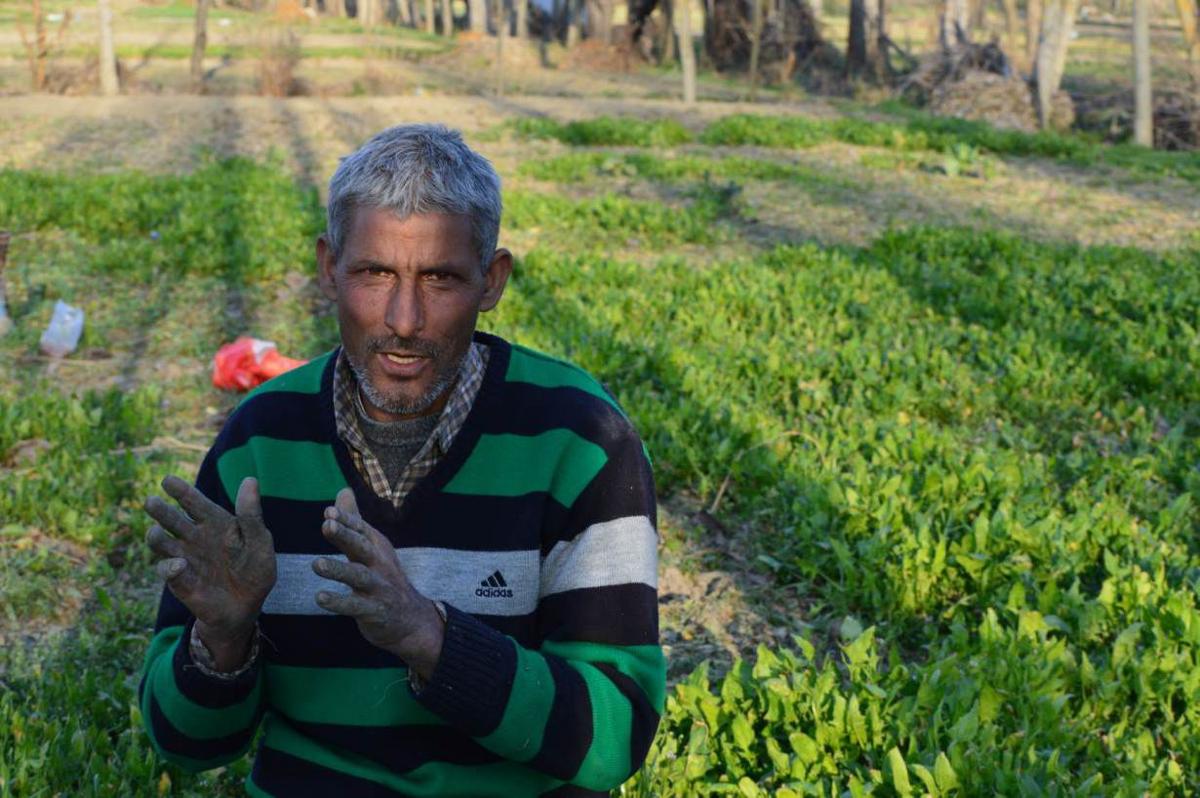 MALURA: A Kashmiri farmer tends his kale crop at his farm in Malura, near Srinagar, India, on March 13. Athar Parvaiz/Thomson Reuters Foundation

SRINAGAR — As a population of enthusiastic meat eaters, Kashmiris have felt the impact of India's coronavirus lockdown at almost every meal.

Kashmir's meat supply, most of which comes from outside the Indian-administered region, has dropped sharply since a nationwide lockdown to stem the spread of the new coronavirus started on March 24.

Imports have stalled and many meat sellers around the Himalayan region have shut, explained Abdul Rashid, who usually eats mutton at least four days a week, but hasn't had any in the past month.

To fill the empty space on their plates, millions of Kashmiris are turning to vegetables, which local farmers have been supplying in growing abundance over the past 15 years, after adopting new seeds and climate-smart growing methods.

"Our choices are very limited these days," said Rashid, who lives in a suburb of the regional capital, as he stopped to buy vegetables from a seller at a local market.

"As vegetables are mostly produced locally, we get them fresh. And we know where they have come from," he said.

Since the start of the lockdown, Kashmiris have been consuming large quantities of haakh – a local variant of collard greens – as well as spinach, potatoes and onions, according to the Kashmir Vegetable Dealers Association.

The boost in vegetable production is the result of changes including growing use of greenhouses and rainwater-harvesting systems, said Akhtar Malik, a curator at the University of Kashmir's botany department.

The amount of land being used to grow vegetables in Kashmir has more than quadrupled since 1981, to 120,000 acres, said Kashmir's Director for Agriculture Altaf Andrabi.

"Our vegetable production is touching new heights annually. The number of vegetable growers has grown in thousands over recent years," he said, with over 100,000 people employed if transport and sales jobs are included.

According to official figures, 70% of Kashmir's population of 7 million is directly or indirectly engaged in agriculture and associated sectors.

Kashmir's farmers currently produce about 1,500 metric tons of vegetables per year, he said, which in the peak summer season not only meets local demand but also allows exports to other parts of India where growing crops such as tomatoes, okra and peas is difficult, he said.

That demand for exports is significantly rising with meat in short supply during the coronavirus shutdown, he told Thomson Reuters Foundation over the phone from his office in Srinagar.

"Kashmir valley has the unique distinction of ... being able to make vegetables available to the rest of the country at a time when the whole country is in need of (more) vegetables," Andrabi said.

Greenhouses were a "game changer," Chitu said, allowing farmers to grow all year round, even through the winter, and protect seedlings that once would have been washed away in the rainy season.

Many farmers switched from rice farming to vegetables after discovering they could make five times as much money, he said.

While farmers in many parts of India have to wrestle with recurring drought, Kashmir's success in ramping up vegetable production has been built in part on improving water storage, said environmental expert Shakil Romshoo.

Installing irrigation systems is difficult in the mountainous and forested region, but farmers are using tube wells and ponds – and some have installed water storage tanks, said Romshoo, who heads the Earth Sciences Department at the University of Kashmir.

More still needs to be done, though, he said.

"The government has said that it wants to increase farmers' income, (but) such goals can't be achieved if farmers have no easy access to water," he said.

Andrabi at Kashmir's agriculture department said the government has helped many farmers without access to irrigation build water-harvesting tanks, and has dug wells and built irrigation canals where possible.

Reyaz Bhat, a farmer just outside of Srinagar, has two water-harvesting tanks – both of which he built because it was faster than waiting for help from the government, he said.

The tanks provide enough water to irrigate his half-acre vegetable farm, he said.

Bhat, who swapped from growing maize to vegetables nearly a decade ago, now makes about 400,000 rupees ($5,300) a year selling his collard greens, tomatoes, cabbage and other produce.

"What I used to earn from maize is not even comparable to the returns I get from growing vegetables. The vegetables fetch me enough money to live a comfortable life," he told the Thomson Reuters Foundation.

With Kashmir's lockdown extended until at least May 17, vegetable farmers say they are reaping the benefits of their bigger role at the family table.

Before the lockdown, "I used to throw out some vegetables the next day as I would not find buyers for all my stock," said vegetable seller Mohammad Yousuf.

These days, when he takes his produce to the market in Srinagar, it sells out in less than three hours, he said.

"I am seeing people buying vegetables like never before," Yousuf said. "This coronavirus has made Kashmiri people forget about mutton."