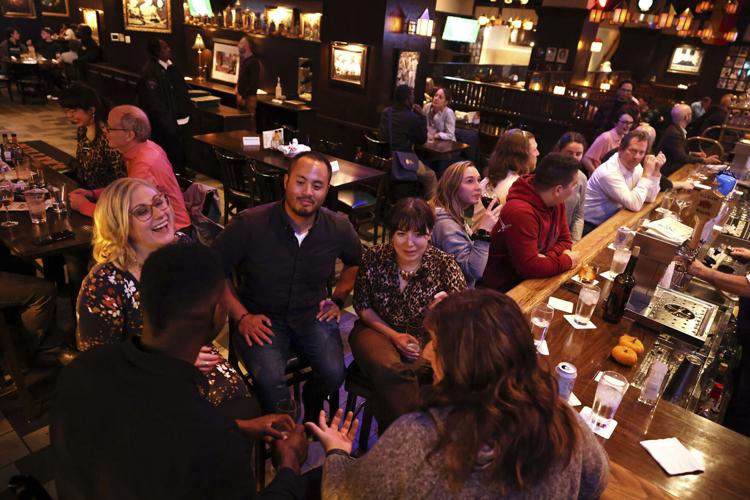 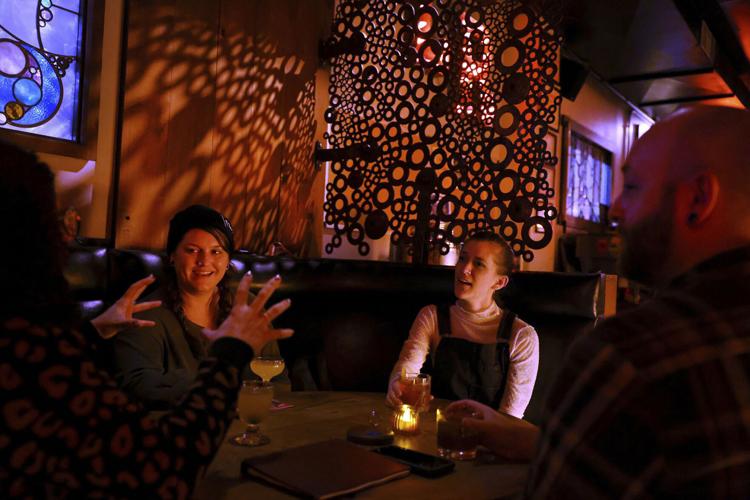 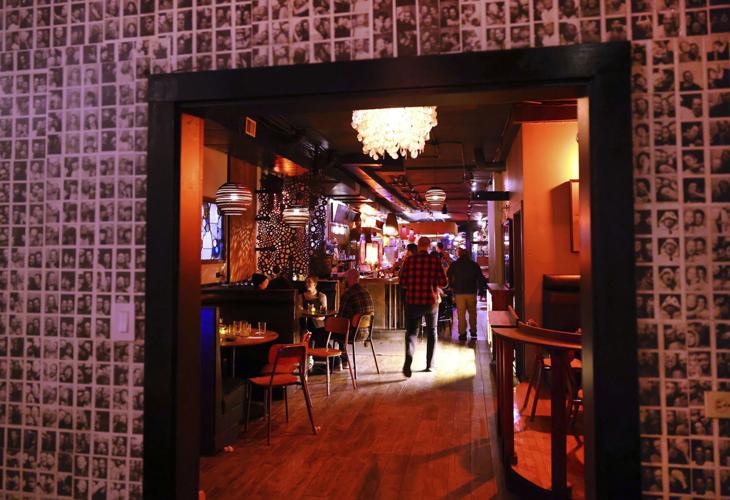 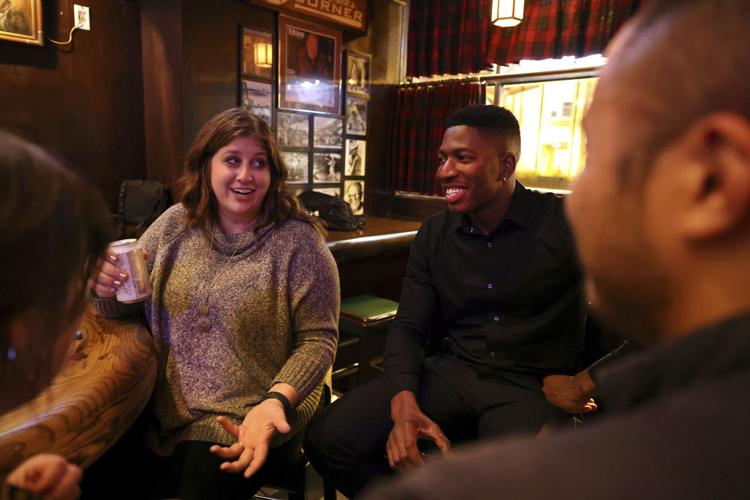 CHICAGO — A few years ago, The Long Room could be quiet as a library until about 8 p.m. without the Chicago bar’s co-owner, Jason Burrell, thinking twice. The rush was still on the way.

Now, that scenario gives him sweats.

Two-and-a-half years into a pandemic that’s turning endemic, bars and restaurants such as The Long Room are finding they need to do healthy business earlier in the day for a simple reason: Late-night eating and drinking just isn’t what it was. And it may never be again.

Even as business climbs back to pre-pandemic levels for many bars and restaurants, owners say the late-night crowd has remained stubborn and elusive, leading countless establishments to close earlier or even open fewer days during the week.

The Long Room remains open until 2 a.m. as business picked up in the past year – but multiple bar and restaurant owners said it doesn’t make up for the decline in late-night business.

The Long Room remains open until 2 a.m. seven days a week, but can no longer bank on customers strolling in after 10 p.m., as it once did, Burrell said. Before the pandemic, it stayed open until 3 a.m. Saturdays, and regularly greeted customers who had just left other bars at 2:05 a.m. Since reopening last summer after a year of pandemic restrictions, The Long Room has scrapped the 3 a.m. Saturday close, and almost certainly won’t bring it back, Burrell said. There’s just no point.

Instead – and unlike the earliest days of operating The Long Room – Burrell sees opportunity in building daytime and early evening business with coffee service, food and happy hour cocktails.

“Happy hour and early evenings are much more robust than pre-pandemic,” he said. “People are going out earlier and getting home earlier – myself included.”

Pat Doerr, managing director of the Hospitality Business Association of Chicago, a lobbying group that represents bars, restaurants and music venues, said changes in citywide late-night business is difficult to quantify, but “is down from everyone I talk to.

“There were a couple summer nights where people said it was like pre-pandemic, but that’s the exception, not the rule,” Doerr said. “What was a normal weekend is now an exceptional thing.”

In many cases, swooning late-night sales are customer driven. In others, it’s due to a series of factors bar and restaurant owners are navigating, such as concerns about crime and staffing issues.

Either way, many bars and restaurants are recalibrating how late they’re open as they adjust to shifting consumer habits that didn’t necessarily start with the pandemic, but which were no doubt exacerbated by it.

In a particularly jarring example for Chicago’s old-school night owls, the Green Mill, an Uptown jazz club once swinging until 5 a.m. on weekends, closes Sunday through Thursday shortly after 1 a.m., and at 2 a.m. Fridays and Saturdays. Before the pandemic, the Green Mill never closed before 4 a.m., operating solely as a late-night bar five days a week.

Once business ramped back up during summer 2021, Green Mill owner Dave Jemilo said, he assumed customers were ready to resume their old habits. Instead, he saw customers filtering out by 1 a.m. The Green Mill shifted to its current earlier hours because “it just wasn’t happening and the writing was on the wall,” he said.

“One o’clock is about it, and when we give last call, it’s not hard getting people out – they’re pretty much done,” Jemilo said.

The irony, he said, is that business is thriving. A recent weekend saw lines around the corner, and bands got standing ovations from people who seemed thrilled to see live jazz, Jemilo said. They just don’t want to see it as late as they used to.

“We’re kicking a-- and it’s wonderful, but I’m still scared to go late,” Jemilo said. “I hate not doing it, and I don’t know if someday we will, but if you commit to do it, you’ve got to be in it for the long haul – and you might lose a buttload of money waiting for it to come back.”

A manager at the White Palace Grill south of the Loop said overnight business remains strong. And Cyndee Aiello, general manager of Griddle 24 on the Near North Side, said the restaurant remains “constantly busy at night” thanks mostly to the bar next door.

“Once the bars built back up, so did we,” Aiello said. “It’s just craziness. People come in, they’re drunk and hungry.”

But many bar and restaurant operators see a change in consumer habits and are mostly left to guess why.

'A perfect storm of a lot of things'

Michael Roper, owner of Hopleaf bar and restaurant just south of Andersonville, called it “a perfect storm of a lot of things that have dried up that late-night business.”

Most obvious are pandemic restrictions, which had bars and restaurants closed or limited for indoor business for parts of more than a year, which bred new habits that haven’t gone away with a return to normal operations. Also, countless people continue working from home or in a hybrid model that has them out earlier, even in the middle of the day with a laptop while working.

Roper said he struggled before the pandemic to justify opening at noon during the week because business was so slow; the first customer sometimes didn’t walk through the door for an hour or two. Now customers are often waiting when doors open, he said. Daytime sales have climbed from about 10% of overall business to about 35%, he said.

But late-night business has fallen off a cliff, he said, leading Hopleaf to trim about 20 late-night hours from its pre-pandemic schedule. It was open until 2 a.m. six days a week, and until 3 a.m. Saturdays. Now it closes at 11 p.m. during the week and at midnight Fridays and Saturdays.

“Prior to the pandemic, I would have said it’s absolutely unthinkable that we wouldn’t be open until 2, and 3 on Saturdays,” Roper said.

Other factors likely contributing to the dive in late-night business include the proliferation of home entertainment options such as video streaming services and the state’s legalization of cannabis in 2020, which Roper and other bar owners speculated has people opting for a buzz on the couch instead of at a bar.

“We always felt we were competing with other bars and restaurants,” Roper said. “Now we compete with people’s apartments, which are pleasure palaces. And during the pandemic, people made them even nicer.”

There are other factors, too, like the expense of ride-sharing services such as Uber and Lyft spiking late at night. Several bar and restaurant operators said they have heard people saying they don’t think public transportation is safe and that ride-share apps become too expensive late at night.

“I have heard people outside at bars at midnight – and I’ve literally heard this in multiple neighborhoods – say, ‘Oh the Uber is only $20, let’s go now before it’s super expensive,’ ” Doerr said.

Jemilo said the cost of ride-sharing influences his decision to close the Green Mill at 1 a.m., both with regard to his customers and his employees; he doesn’t want his workers to spend an outsize amount of the money they make in a night to get home safely at 3 or 4 a.m.

A long and slow road

Miller’s Pub, an 87-year-old South Loop bar and restaurant, hasn’t stayed open until 4 a.m. since before the pandemic, even though like the Green Mill, it has a late-night license, and even pays the city an extra $3,000 per year for the privilege. Instead, the longtime late-night beacon for tourists, business travelers and Chicagoans getting off the late shift closes at 2 a.m.

Co-owner Andrew Gallios said he’s not convinced demand for late-night eating and drinking is gone, but for Miller’s, the return of business travel and conferences will be key to staying open later. According to Choose Chicago, the city’s tourism bureau, McCormick Place Convention Center has hosted 74 events through September, compared with 128 across the same time frame in 2019. The city has booked 1.86 million hotel room nights, about 80% of 2019 levels.

Choosing to close at 2 a.m. is fueled by several issues, Gallios said. One is concern for the safety of his staff and customers amid an increase in violent downtown crime.

Another is the difficulty of hiring workers, an issue endemic to the hospitality industry for much of the pandemic. That challenge has had a secondary effect on late-night business, Gallios said – those people aren’t only workers, they’re also his customers.

“A lot of our late-night business was people working at restaurants and hotels that closed at 8 or 10 or 12 or even 2, but if there’s less of those people, it trickles down to us,” he said.

There has also been a shift in the mentality of how to operate a bar or restaurant, Gallios said. Before the pandemic, it was all about the grind, and wringing every possible cent from the operation. Now, restaurant operators manage their staffs more conscientiously.

“We’d probably make money, but I’m not working until 4 a.m. anymore, and it’s hard to put that on my managers,” he said. “It doesn’t seem worth it.”

Reopening after pandemic shutdowns has been a long and slow road; Miller’s only went back to being open seven days a week last month, a milestone Gallios said felt momentous. Staying open until 4 a.m. may be a final step toward normalcy, but it remains “the furthest thing from our minds,” he said.

“It’ll be icing on the cake,” he said. “There aren’t a lot of 4 a.m. options in the Loop, and it’s something we liked to be known for – but maybe it’s more trouble than it’s worth.”