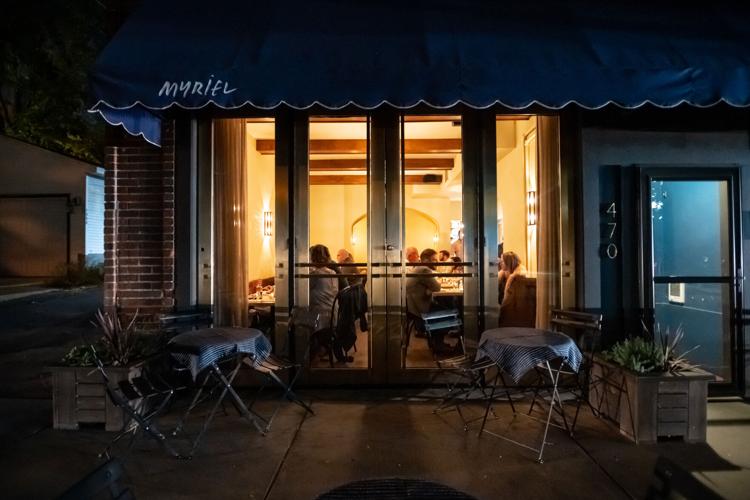 FROM OUTSIDE: A view of the dining room from outside. Caroline Yang/For The Washington Post 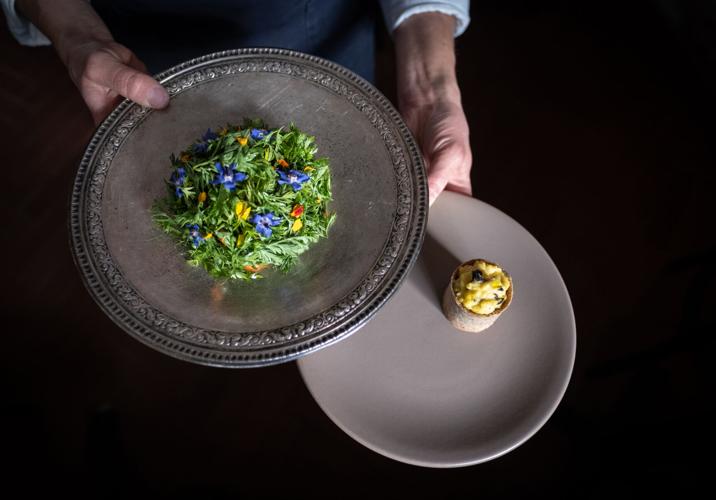 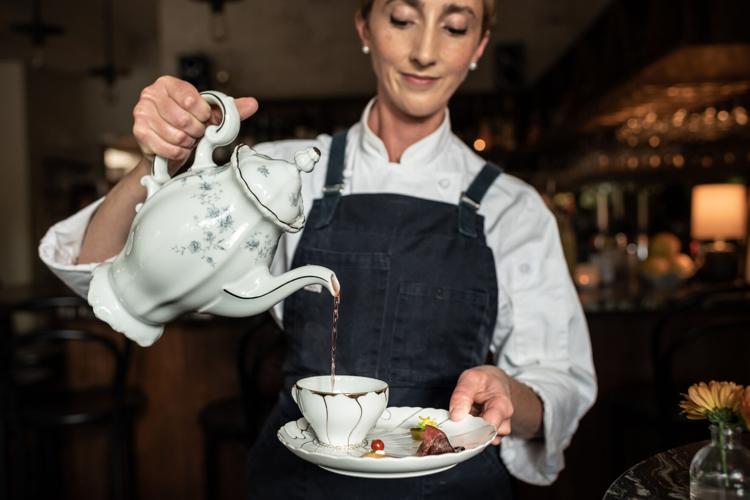 CUP OF TEA: Karyn Tomlinson, owner and chef at Myriel, a restaurant focusing on farmstead cooking, pours tea at the start of the tasting menu. Caroline Yang/For The Washington Post 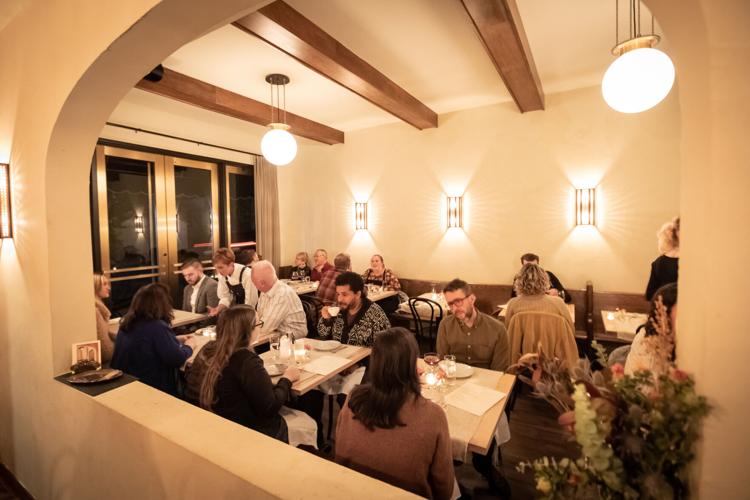 DINING ROOM: A view from the bar of the homespun dining room at Myriel. Caroline Yang/For The Washington Post 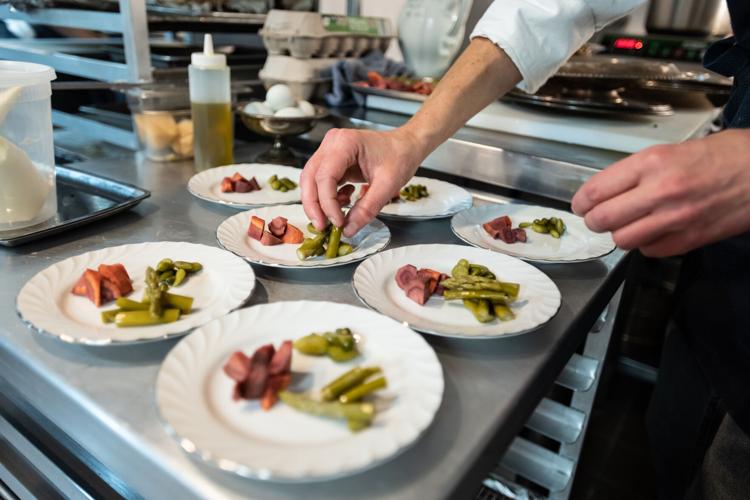 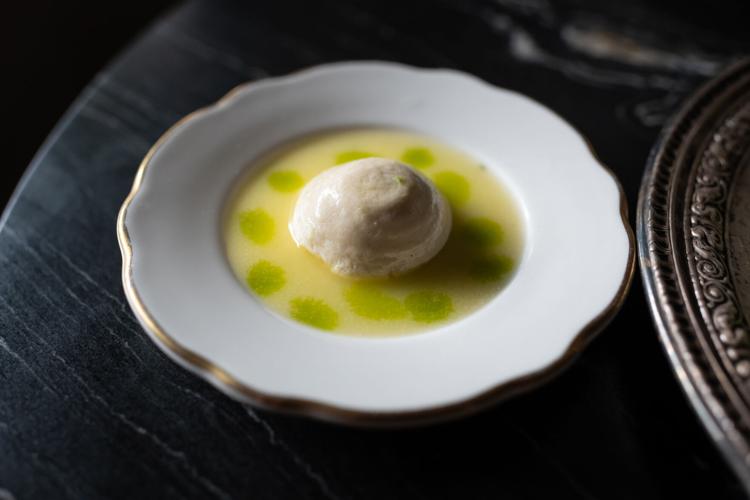 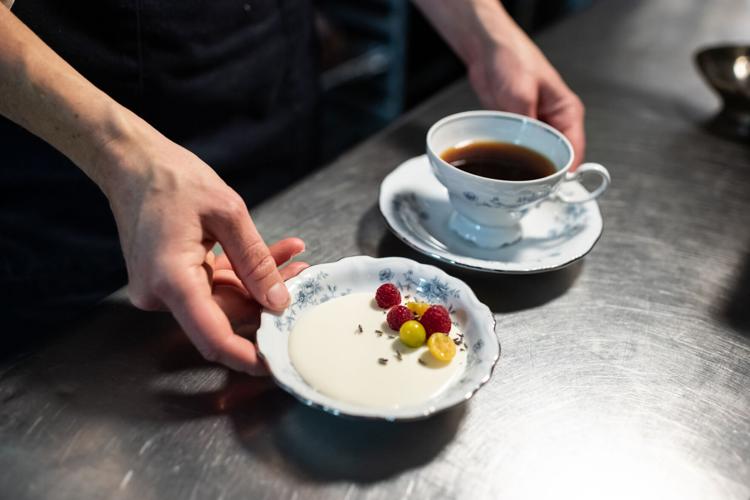 FROM OUTSIDE: A view of the dining room from outside. Caroline Yang/For The Washington Post

CUP OF TEA: Karyn Tomlinson, owner and chef at Myriel, a restaurant focusing on farmstead cooking, pours tea at the start of the tasting menu. Caroline Yang/For The Washington Post

DINING ROOM: A view from the bar of the homespun dining room at Myriel. Caroline Yang/For The Washington Post

To understand what makes Myriel in St. Paul such a beguiling place to eat, you have to ask chef-owner Karyn Tomlinson about her youth in Minnesota, where Tomlinson spent time with her paternal grandparents in a farm town named Dassel, population 1,462. Tomlinson's grandmother was the sort of cook who habitually "pulled a meal out of the oven after church on Sunday," often pot roast, enough to share with anyone her grandfather, an avid gardener, invited home. The chef's memories of his harvests include carrots, cucumbers, peas and beets, her favorite.

"I enjoyed the connection between growing food and making people happy with a meal," says Tomlinson. Her intimate restaurant, introduced last year, follows a happy run as chef de cuisine at the late Corner Table in Minneapolis, a winter working at the acclaimed Fäviken in Sweden and as many cooking lessons as she could afford at Le Cordon Bleu in Paris after a stint in the nonprofit world. Along the way, she's also picked up awards for her work with pastry and pork. In 2018, she was the first woman to win the Grand Cochon prize celebrating heritage-breed hogs.

One of the early dishes Tomlinson learned to make from her grandmother, of Swedish descent, was apple pie, which people still talk about several years after Jeanette Tomlinson's death. "There was always a pie in the oven. It was my grandmother's love language." Lard was key to the pie's success, but so was a light touch with the crust, says Tomlinson, whose grandmother's arthritic hands probably explained the practice. The result was "an ugly, crumbly" but delicious crust, says the chef, who turns 37 this month. "It wasn't a basket weave!"

With few exceptions, there's nothing fancy about Myriel, either. Tomlinson is simply channeling old-fashioned cooking techniques and championing the cause of small farmers to create a style that fuses her French training and minimalist approach to ingredients from the Land of 10,000 Lakes. Think of it as elevated farm food, untouched by tweezers.

Tomlinson says she learned her craft at a time when the restaurant kitchen "was a place for pirates," but resisted the temptation to join the club. Her skin is free of ink, for instance. Surely one of the reasons she landed a non-paying gig at Fäviken was because of the way she endeared herself to the staff as a customer trying to get a seat at the famously hard-to-book dining destination: She thanked them at the door with a pie she baked herself - in her Airbnb in Norway, then ferried to the remote restaurant via train and cab.

Plenty of her peers subscribe to buying what's local and seasonal from nearby sources. Tomlinson takes the philosophy a step further, relying on a handful of suppliers within a 50-mile radius. Some are such small businesses, the sources have other jobs to sustain their passion.

Take Clint and Amanda Scherping. He's a project manager for a construction company. She's academic dean at a high school. The couple, parents to eight children, find time to raise beef cattle, pigs, chickens and ducks on their 350-acre farm an hour outside the Twin Cities. "We don't confine anything," says Clint, who jokes that gathering eggs on their "micro-batch" plot is "an Easter egg hunt" that can lead all over the ground and into the hayloft. Tomlinson spends a day or more every week picking up ingredients herself. Driving to and from her suppliers, she also forages. Mother Nature gifts the chef mushrooms, flowers, wild grapes and plums that Tomlinson pickles or turns into vinegars. Cedar trees provide branches for burning and berries for cooking.

Myriel also makes the case for Midwestern hospitality, service being an important part of a meal in her restaurant, which takes its name from the gracious bishop in "Les Miserables" who welcomes Jean Valjean into his home in Victor Hugo's 1862 classic novel. Tomlinson says she strives for "unpretentious excellence," exemplified in details such as the table linens her mother sewed for her.

The chef says she was also inspired by the "intentionality of business" at Fäviken, where lookouts identified guests as they approached the restaurant and could greet them by name in whatever language they spoke. There are no scouts at Myriel. But after guests are seated, Tomlinson introduces herself to participants of Myriel's 12-course, $135 tasting menu. (An a la carte menu is also available; duck breast, Parisienne gnocchi and vegetable soup are typical standbys.)

"I like meeting everyone who is dining here," says the chef, who interacts with guests throughout the night. "What we're doing is storytelling," making connections to the food and showcasing "the hard work from one community." She acknowledges that some of the details might sound "Portlandia"-precious, but says "our beef really comes from happy cows," raised by farmers who name them.

QR codes have no home at Myriel. Tomlinson goes for a more personalized style, writing her menu using just a few words so customers have a chance to engage with servers. "Shorthorn tartare, gaufrette" translates to a ruddy scoop of raw minced veal flanked by a single ridged potato chip and a dusting of herb ash made from last season's dried bounty. Control freaks curious about what they will be eating at Myriel might be disappointed to learn Tomlinson doesn't post a menu online, partly because it changes a lot, she says, but also because "I'd rather they come because they know what to expect in terms of experience."

A sense of Myriel's homespun charm begins at the screen door and continues in the dining room, where candles flicker, the cotton napkins have the feel of dish towels and the modern equivalent of an old-fashioned relish tray - pickled asparagus, green beans and celery root - signals the start of the tasting menu. The edible greeting harks to the way the chef's family received anyone who dropped by - with coffee and a snack, typically homemade - or what Swedes know as fika.

The cymbal crash in the otherwise subdued concert is a two-part course: creamy scrambled eggs served in a vase of buckwheat pastry accompanied by a molded carrot salad in a silver dish. The former tastes Old World and luscious. The latter is a mound of brined cows' milk cheese and creme fraiche covered with sliced carrots dressed with chive oil, everything hidden by a brilliant green carpet of chopped carrot greens.

Tomlinson is gently adamant about presenting Minnesota cooking in the best light. You will never see the food equivalent of "Fargo" on her menu. When asked if she might consider serving hotdish - picture a bunch of basic ingredients, often including a can of creamed soup, baked in a casserole - she says the closest approximation is "cassoulet, served in a gratin."

The chef eschews ocean fish for lake fish, including perch from Lake Superior. "What Minnesotan didn't grow up fishing?" One of the more elegant courses is a silken trout mousseline in a pool of beurre monté, its surface enlivened with dots of emerald ramp oil from ramps she collected herself. The product is always treated with respect and restraint. Young hen, simply roasted with salt and butter, comes with bread and cultured butter for sopping up what Tomlinson calls "bird stock" hit with wild plum vinegar. The house-baked bread made with red winter wheat arrives late in the meal; Tomlinson doesn't want you to fill up on it.

If a lot of the food is plain to the eye, as farm cooking tends to be, the flavors run intense and true. The sweet flavor of the Scherpings' Irish Dexter beef springs from cattle fed a diet of grass and hay. A blueberry sorbet captures summer's bliss in every spoonful.

Dinner at Myriel prompts a question: Why isn't Midwestern cuisine more of a thing? Tomlinson thinks it might be because the style is "hard to define. It's more subtle." Much of what she does at Myriel has origins in "pre-World War 2 techniques: canning, preserving, drying." The restaurant's basement houses bunches of dried flowers and herbs, including the hyssop used in the ethereal lemon thyme panna cotta.

Farmer Clint Scherping says he sees Myriel as a way to "maintain an authentic connection to our rich agrarian culture," but also a path toward healing a divided country. "If we want to help people who don't have the same opportunities," he texted after we spoke on the phone, "how or where do we start? Well, how about through our bellies?"

If Tomlinson isn't sharing a story, one of her staff is taking pulse checks. "How was your dinner companion tonight?" I look up from a piece of extraordinary veal tenderloin, paired with nutty hen of the woods mushrooms, to find a server checking in on me, a solo diner who joked earlier in the evening that one of Myriel's signature drinks would have to keep me company. Nodding to the Sazerac-like cocktail, the attendant joked, "Never lets you down."

A meal finishes with the option of Swedish egg coffee, which is just what it sounds like: a whole egg added to ground coffee before it's brewed, making for a clear and velvety cup. Only when dessert is removed does a diner receive a list of what they ate; in a charming touch, a little map of Minnesota, pointing out Myriel's farm sources, is tucked inside the envelope.

Diners celebrating an anniversary or birthday might also be the recipients of a slice of whatever pie Tomlinson baked that day. The chef thinks pie is practical, something a customer can wait to eat the next day.

More than that, she says, pie "is the best expression of hospitality I can give in one thing. That's how I knew I was loved by my grandmother."