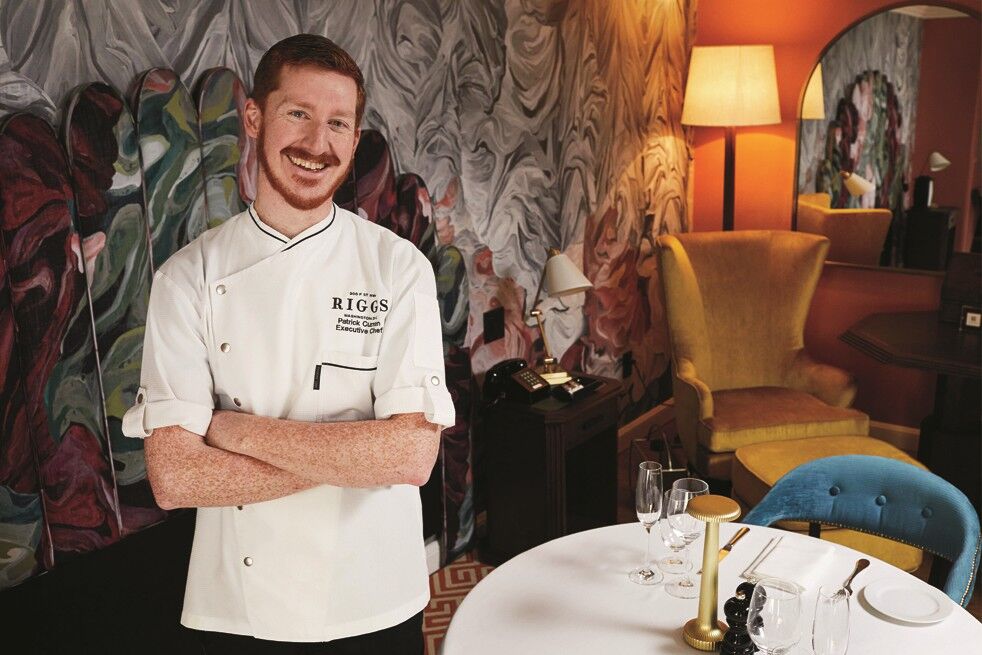 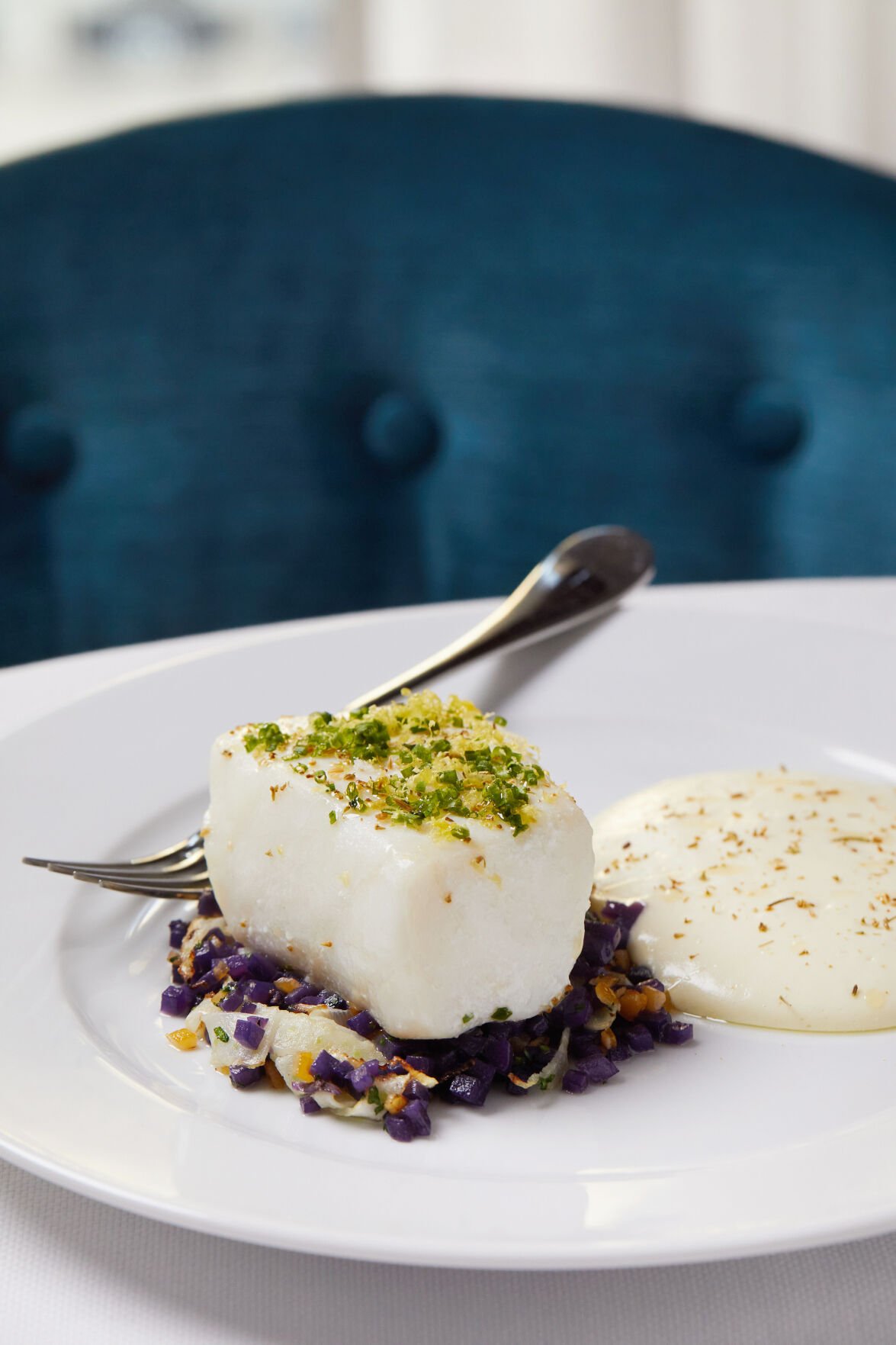 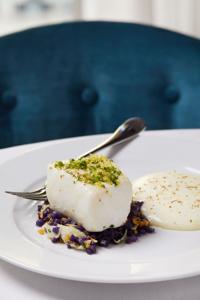 WASHINGTON — In the olden days – you know, before 2020 – chefs were judged primarily on what they put on a plate. Now, safety-conscious diners are just as invested in where the food is served. Since the pandemic, I've eaten in parking lots, greenhouses, tents, restaurants whose roofs can retract and streets converted into alfresco dining rooms. But it wasn't until January that I checked into a hotel with the sole aim of eating dinner in a guest room whose bed was removed to make way for a table and chairs.

Welcome to the Riggs Hotel in the city's Penn Quarter neighborhood, where two of us have bypassed the dashing Cafe Riggs in favor of Room No. 307 upstairs. We've arrived sans luggage but with loads of curiosity as to how the night will progress. Our server turns out to be Michael Richmond, the hotel's assistant food and beverage director, who greets us in the lobby, brings us to the elevator ("Mind if I ride with you?") and escorts us to a guest room, where we settle into a linen-draped, lamp-lit table nestled between a headboard on one side and a large TV on the other.

First things first. "Water?" he asks. We're good with D.C.'s finest, which Richmond plucks from a tall safe doubling as a minibar. (Riggs was a well-known bank before it was a hotel.) Our guide introduces us to the remote for the TV, hands us the menu and asks us to exchange cell numbers with him, in the event he's downstairs and we're in need of more bread or an extra spoon. "I'll always knock" before entering the room, he says. "Oh, one last thing," Richmond adds before leaving with our drink requests. "Here's the bathroom."

Hotel occupancy in the United States plunged to 44% last year, a historic low, according to STR, a travel research company. One way some hotels have addressed the problem is to open their guest rooms to diners. Washington subscribers include Yours Truly in the West End and Sofitel downtown.

Riggs raced to introduce the amenity days before Christmas, when the hotel was poised to serve hundreds of patrons in its restaurant and Washington Mayor Muriel Bowser suspended indoor dining through the middle of January. "The last thing we wanted to do was ruin anyone's holiday plans," says executive chef Patrick Curran. His colleagues sprang into action, calling reservation holders with an alternative game plan, dubbed Cafe Riggs Upstairs, and readying 10 guest rooms on three floors for private, in-room feasting.

One of the early lessons: Diners spread across multiple floors is a headache for staff. Now, meals are delivered just to the third story. The hotel has also learned to anticipate guests' needs. For the sake of efficiency, drinks can be preordered and extra bread might accompany the steamed mussels, says Daniel Pimentel, the hotel's general manager. With in-room dining, a single oversight – the wrong wine – can be "a five- or 10-minute mistake," since servers are apt to be out of view. To facilitate service, diners' texts to their server are also seen by the bar, kitchen and front desk staffs. "It's all about classic communication," he says.

Forget checking in just for fries and beers. Riggs has a food and drink minimum of $125 per person, which helps cover the estimated $50 expense of disinfecting the room. While reservations are for two hours, "we're flexible," says Pimentel. For everyone's safety, spaces aren't rebooked for at least 24 hours. Guests can opt to have meals left outside their door, but that strategy feels too Door Dash for me. Part of the fun of going out to eat is the interaction, even at a distance, with staff.

Knock knock. It's our first course at the door. Whenever I travel, I like to start the adventure with oysters, which my late friend, Seattle seafood maven Jon Rowley, advocated. Never mind that this particular trip involves a drive of only four miles from home and a short elevator ride to our seats. An iced platter of Savage Blonde oysters from Prince Edward Island, gently crisp and nicely briny, puts us in vacation mode. We're equally pleased with Curran's silken sunchoke custard decorated with coins of the pickled vegetable. Finger-length rolls are reassuringly bundled in brown paper sleeves.

Richmond, who keeps his distance whenever he's not serving or clearing dishes, sprinkles fun facts throughout the evening. To balance the masculine stone facade of the Riggs, the designers opted for comparatively feminine guest quarters, he says. "That's why we call them First Lady and not Presidential suites."

Knock knock. Entrees enter. Duck confit strewn across a bed of frisee with a trembling poached egg is dressed with a brown butter vinaigrette made tangy with grapefruit. Halibut poached in olive oil and perched on a little garden of sauteed fennel purple potatoes and preserved lemon underscores the chef's affinity for acid – sparkle – in his cooking.

The beauty of supping in a guest room goes beyond the obvious ability to practice social distancing. Guests can play whatever music they want (let me suggest jazz with the roasted broccoli salad, brassy with garlic in its dressing) or catch a movie. Mindful of the two-hour reservation, my date and I were chaperoned by NBC's Lester Holt, who delivered the day's news. Back when we were squished inside dining rooms and people complained about noise and bar-stool hogs, I resented TVs in restaurants, considering them a distraction to food, service and conversation. Now? When two of you are under the same roof 24/7, an outsider can be welcome company.

A rap at the door signals dessert. We are happy to receive a slice of clafoutis, winterized with cranberry and pear, and a showy gateau Saint Honore.

Riggs plans to offer guest room dining "as long as demand is there," says Richmond.

Bringing dinner to a close

No one rushes us out the door, but I'm aware the clock is ticking as I push away from the table and prepare to leave what's been a delightful evening out. I pause to inspect the bathroom. No big towels. And the closet is absent fluffy robes. To avoid unnecessary cleaning or extra touch points, Riggs has cleared the room of some hotel frills.

Later, I learn that the amenities are just a text away. "If someone wants a pair of slippers for dinner," says Curran, Riggs can deliver the goods.

Unrated during the pandemic.