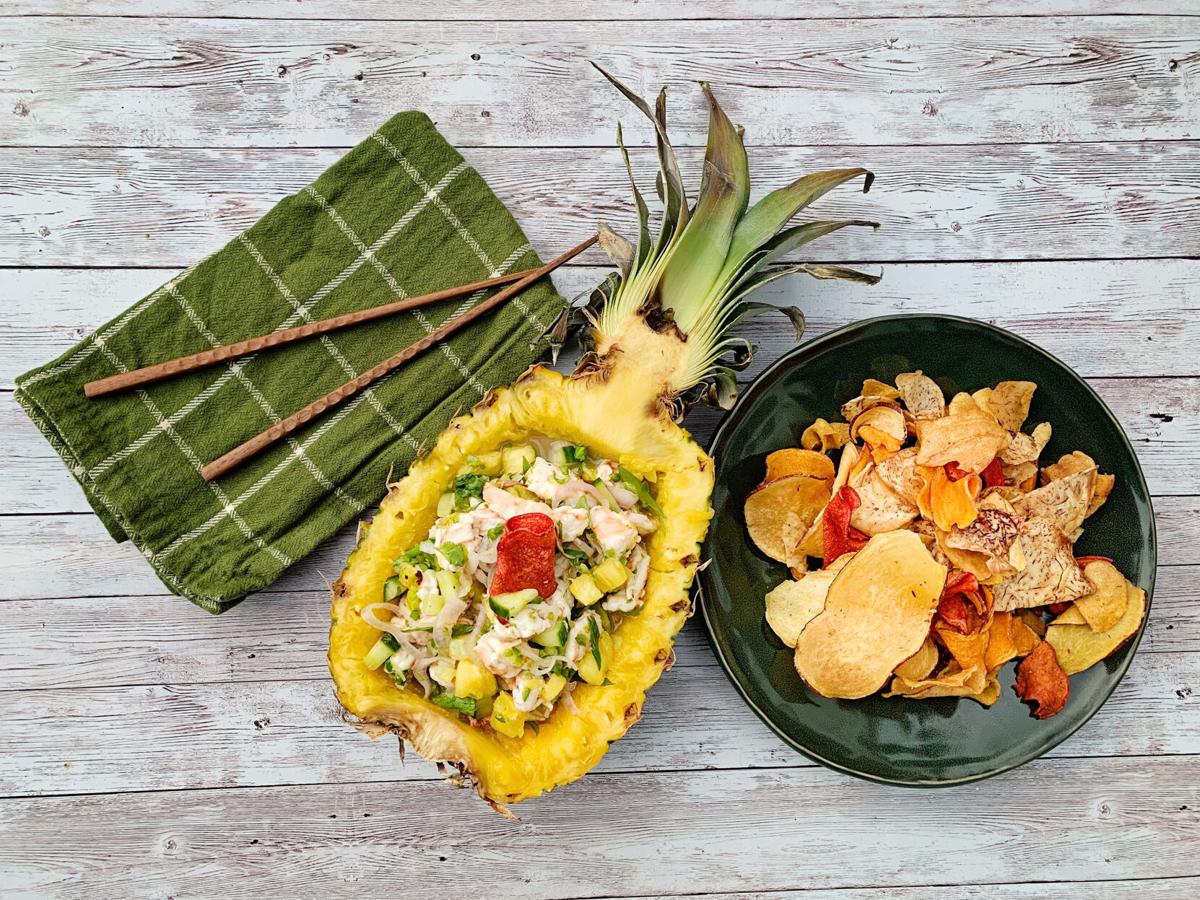 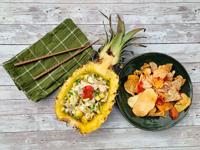 PINEAPPLE SHRIMP CEVICHE: Ceviche includes raw seafood – in this case, shrimp – that is "cooked" with lime juice, so buying good-quality fresh shrimp is a key element of this recipe. Those with health concerns prohibiting them from consuming raw seafood can saute the chopped shrimp in a tablespoon of extra virgin olive oil in a pan and then chill in the refrigerator before mixing with the rest of the ingredients. Lauren J. Mapp/The San Diego Union-Tribune 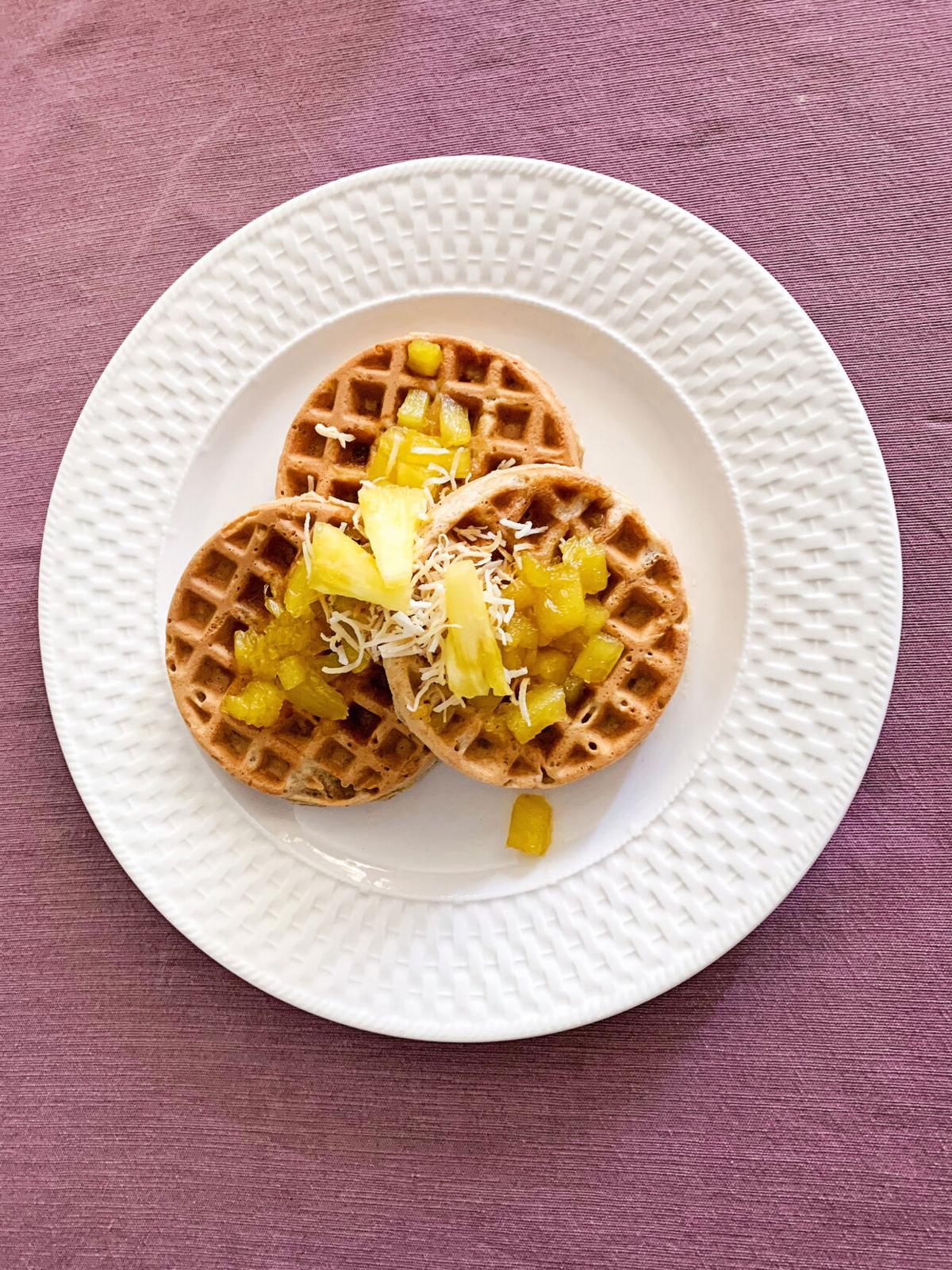 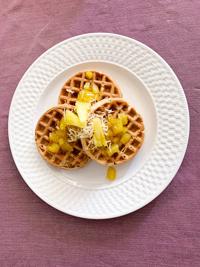 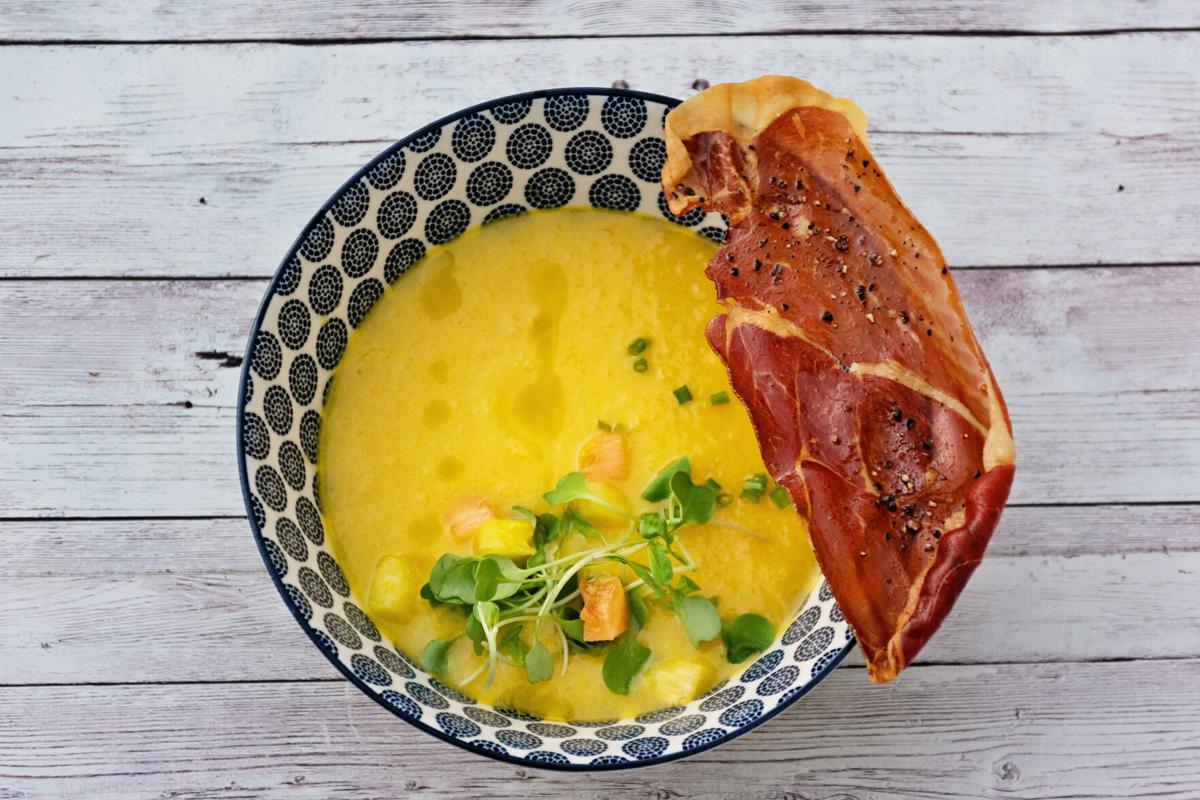 PINEAPPLE SHRIMP CEVICHE: Ceviche includes raw seafood – in this case, shrimp – that is "cooked" with lime juice, so buying good-quality fresh shrimp is a key element of this recipe. Those with health concerns prohibiting them from consuming raw seafood can saute the chopped shrimp in a tablespoon of extra virgin olive oil in a pan and then chill in the refrigerator before mixing with the rest of the ingredients. Lauren J. Mapp/The San Diego Union-Tribune

When I think of foods to eat during the summer, one flavor rises to the top of my list: pineapple. The aroma of the tropical yellow fruit reminds me of warm days by the pool, or of having my toes buried in the sand and the feeling of sun rays toasting my shoulders.

The pineapple plant, which is native to Brazil and Paraguay, is thought to have been transported by Indigenous people throughout South and Central America, and Native Caribbeans would place pineapples at their doorways to welcome guests. Spanish colonizers brought the fruit to the Philippines, and it was later farmed in Guam, Hawaii and Malaysia, according to the book "Fruits of Warm Climates" by Julia F. Morton.

Today, pineapples remain a symbol of hospitality in architecture and hotel designs. Each one takes about three years to grow, and the majority are grown in Southeast Asia.

To pick a good pineapple, choose one with fresh, green leaves on the crown, and a firm body. It should not be rock-solid nor squishy to the touch when lightly squeezed, and the base should have a sweet pineapple scent. If there is no scent, it is underripe; if it smells sour or fermented, it's overripe.

Pineapples don't continue to ripen once they are harvested, so it's best to buy one ready to eat. If using within two days, a whole, uncut fresh pineapple can be stored on the shelf; otherwise, refrigerate until ready to use.

There are several ways to prepare a pineapple, depending on how you plan to eat it. If you're making a dish you'd like to serve in the pineapple itself, as a shell – like the Pineapple Shrimp Ceviche below – slice the fruit in half lengthwise, then scoop out flesh to clear space for the filling.

For pineapple slices or wedges, cut off the crown, then slice off the exterior peel of the fruit and the prickly, inedible "eyes." Turn the pineapple horizontally and cut 1-inch slices for wheels; cut each wheel into quarters for wedges.

A third option is to use some creative cutting to retain what many say is the sweetest part of a pineapple: the outer edge, just under the peel. Here's how to separate it from the eyes: Run a chef's knife down the sides of the pineapple to remove the peel and expose the eyes – but not cut them out – before chopping off the base of the fruit and twisting off the crown. You'll notice that the eyes actually line up on a diagonal, all the way around. To easily remove them but salvage the surrounding sweet flesh, run a paring knife down each side of the eyes to create a V-shaped channel that follows the diagonal, and remove. Repeat with each line of eyes.

Because cooking when it's already hot can make a warm apartment feel even more tropical, here are some pineapple dishes to make this summer that either don't need to be cooked or don't require turning on the oven.

Ceviche includes raw seafood – in this case, shrimp – that is "cooked" with lime juice, so buying good-quality fresh shrimp is a key element of this recipe. Those with health concerns prohibiting them from consuming raw seafood can sauté the chopped shrimp in a tablespoon of extra virgin olive oil in a pan and then chill in the refrigerator before mixing with the rest of the ingredients.

1 lemon, cut in half

First, remove shells from shrimp, then run a knife or a pair of kitchen shears down the back of each shrimp to remove the vein. Rinse shrimp, then cut each into four pieces and place in a bowl.

Zest two of the limes directly into the bowl, then cut all four limes in half and squeeze the juices into the bowl. Add finely minced garlic, stir, cover and store in the refrigerator. Let marinate for at least 30 minutes and until the flesh of the shrimp is pink and opaque. Depending on the size of the shrimp, this can take up to two hours.

While the shrimp is marinating, chop cucumber and pineapple into 1/4-inch pieces. Slice the shallot and green onions. Cut jalapeños in half and remove the chile peppers' stems, ribs and seeds, then finely mince the jalapeños. In another bowl, mix together the pineapple – drained of any excess juice – with the cucumber, shallot, green onions, jalapeños and cilantro.

For the pickled red onion garnish, thinly slice a red onion and place in a jar. Juice the lemon into the jar and add salt. Cover the jar, then gently shake and store in the refrigerator for at least 30 minutes before serving.

Once the shrimp is pink and opaque, mix it into pineapple mixture and season with sea salt and freshly cracked pepper to taste.

Fill half of a scooped-out pineapple with the cold ceviche, then top with the pickled red onions. Serve with Terra chips or tortilla chips on the side or atop tostadas, or crispy, whole tortillas.

For the pineapple sauce

Preheat oven to 200 degrees and preheat waffle iron to medium or medium-high heat. Place flour, sugar, baking powder, pie spice, cardamom and salt in a bowl, then whisk until combined.

In a separate bowl, beat together eggs, coconut milk, avocado oil and vanilla extract. Slowly add in dry mixture until fully incorporated, then fold in pineapple, coconut and hazelnuts. Pour batter into waffle iron, close and cook for about 3 minutes, or until the outside is crisp and golden-brown.

While making multiple batches, store cooked waffles in the 200 degree oven to keep them warm until ready to serve.

To make the pineapple sauce, add all ingredients to a saucepan and simmer for about 20 minutes until the sauce thickens into a syrup.

Spice note: If you do not have pie spice – I found mine at Penzey's Spices – you may substitute apple pie spice, which is available at most grocery stores.

Measuring note: To measure the precise amount of avocado oil, pour the canned coconut milk into a 2-cup measuring cup, then pour in avocado oil until there are two full cups of liquid.

Inspired by the chilled, flavorful soups from the Andalusia region of southern Spain, this modern twist with pineapple makes a light and refreshing summer meal.

To prepare cucumber, cantaloupe and pineapple, remove the seeds and peels of each, then roughly chop and set aside enough for the soup and the garnish. Add the garlic clove and shallot to a food processor or blender, and chop until finely minced. Add 2 cups of cucumber and 1 cup each of cantaloupe and pineapple to the food processor and blend until pureed. Next, add water, salt and olive oil, then blend until fully incorporated.

Transfer to a sealed container and refrigerate for at least one hour or up to 24 to allow the flavors to fully incorporate. To serve, pour gazpacho into five bowls and drizzle each with a teaspoon of extra virgin olive oil. Then, top each bowl with a teaspoon each of cucumber, cantaloupe and pineapple, 2 teaspoons each of micro arugula, and one piece of crispy prosciutto.

Note: To make crispy prosciutto, brush each slice with olive oil and sprinkle with sea salt and freshly cracked black pepper. Arrange in a single layer on either a wire rack or parchment paper on top of a cookie sheet, and bake at 400 degrees for about 10 to 15 minutes, or until the meat has become crispy.

Spanish colonizers brought the fruit to the Philippines, and it was later farmed in Guam, Hawaii and Malaysia, according to the book "Fruits of Warm Climates" by Julia F. Morton.