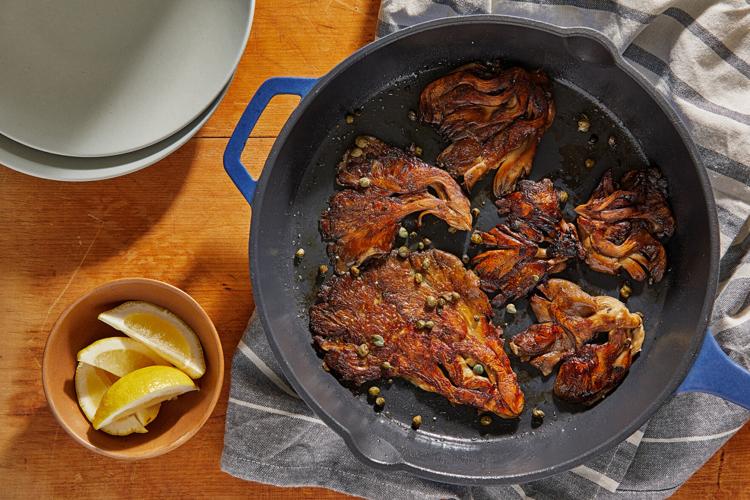 INSPIRATION: This recipe for Salt and Pepper Brick Mushrooms is inspired by brick chicken, which uses a press-and-sear technique that results in crispy mushrooms with a tender, juicy - and not rubbery - interior. Tom McCorkle/For The Washington Post 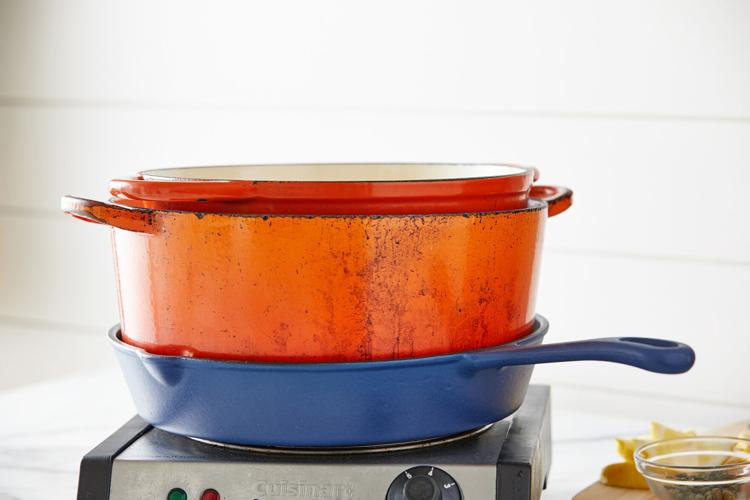 STACK 'EM: Cover the mushrooms with a sheet of foil, folding it into a round to cover the mushrooms and fit the contours of the skillet. Place a Dutch oven or another cast-iron skillet as close to the same size as the first one on top of the foil. If you have more cast-iron cookware, stack it on top, flattening the mushrooms. Tom McCorkle/For The Washington Post

INSPIRATION: This recipe for Salt and Pepper Brick Mushrooms is inspired by brick chicken, which uses a press-and-sear technique that results in crispy mushrooms with a tender, juicy - and not rubbery - interior. Tom McCorkle/For The Washington Post

STACK 'EM: Cover the mushrooms with a sheet of foil, folding it into a round to cover the mushrooms and fit the contours of the skillet. Place a Dutch oven or another cast-iron skillet as close to the same size as the first one on top of the foil. If you have more cast-iron cookware, stack it on top, flattening the mushrooms. Tom McCorkle/For The Washington Post

Andrea Gentl spent much of her childhood looking down. As she put it, "I preferred seeing what was under my feet as opposed to looking up." She lived on a family farm in a small town in Western Massachusetts. She spent most of her time outside, much of it in the woods, and what were often under her feet were the things she was most interested in contemplating, drawing, and later in her life, cooking and photographing: mushrooms.

Is any food in the plant kingdom more beautiful? "They're so sculptural, and I studied sculpture in college, too, so I just love their form," she tells me in a Zoom call from London, where she and her husband, fellow photographer Martin Hyers, were on a shoot.

Her aesthetic appreciation eventually led to a culinary one. Now Gentl has a cookbook out, "Cooking With Mushrooms," that celebrates an ingredient she lauds for its versatility, flavor, health-boosting qualities and general deliciousness in the kitchen. More than anything, her book displays a dedication to treating mushrooms with respect and a knack for getting the absolute most out of them by paying careful attention to technique.

To Gentl, the secret to cooking mushrooms well has to do with moisture management. They have a lot of water, and you want to get rid of it. That means that one of the biggest mistakes you can make when cooking them is to be too timid with the heat - and the time.

"You want that high heat," she says. "I also think people don't cook them long enough. If you don't get rid of enough water, they're going to end up just being kind of slippery and not what you really want." (Her one concession to the beauties of lower heat is drying, when you use super-low heat - and a lot of time - to dehydrate mushrooms, concentrating their umami and turning them into potent seasoning powders.)

Her one-page explanation of five mushroom-cooking techniques is one of the best, most succinct I've seen, and that alone is worth the price of her book. She includes instruction for sauteing (with fat), dry sauteing (without), roasting, searing and grilling. For the most part, she cautions, you want to make sure you don't salt the mushrooms too early in the process, which can turn them rubbery.

Mushrooms are one of those divisive foods, but whenever I hear someone talk about not liking them, I ask more questions and usually learn that it's about their texture - the same kind of texture that Gentl's techniques can help cooks avoid. Nowhere in her book is that more clearly defined than in her recipe for Salt and Pepper Brick Mushrooms, a recipe inspired by brick chicken, which uses a press-and-sear technique that results in crispy mushrooms with a tender, juicy - and not rubbery - interior.

It's such a fun recipe to make, because you get to stack a cast-iron skillet or Dutch oven (or multiples) on the mushrooms as they sear in a simple combination of oil and a little salt, pepper and capers. (The minimal salt here isn't enough to make them rubbery.) Since different mushrooms release different amounts of liquid, you have to pay attention, but essentially you're keeping the pressure on them as they cook for about 10 minutes on each side.

The only other seasoning here is lemon. You eat the mushrooms with a knife and fork, steak-style, with whatever accompaniments you'd like: pureed potatoes and/or cauliflower would be a natural, as would a green salad.

At a cookbook dinner, Gentl tells me, she reduced some mushroom stock for hours, enriched it with butter, and poured that on top for even more concentrated fungi flavor. While that sounds amazing, I can assure you that even without such enrichment, these might be some of the best mushrooms you've ever cooked. Best of all, the technique works as beautifully on the common portobello as it does on lion's mane, oyster and maitake, whose frills flatten into the most delectable layers.

Adapted from "Cooking With Mushrooms" by Andrea Gentl (Artisan, 2022).

This riff on classic brick chicken cooks mushrooms under a weight, but you don't need a brick to make it. A second cast-iron skillet or Dutch oven (or multiples!) compresses the mushrooms, which form a crunchy crust while keeping them juicy and tender on the inside. You can use any mushroom variety you'd like, but it's particularly fun to try oyster or maitake, since a bunch is connected at the base and you get a nice layering effect.

As for seasoning, it's super simple: salt and pepper, plus capers - and a squeeze of lemon juice - for zing.

Storage notes: Refrigerate for up to 3 days.

1 1/2 pounds fresh mushrooms, such as oyster, maitake, lion's mane or portobello, trimmed and kept in the largest pieces possible

1 lemon, cut into wedges, for serving

In a small bowl, combine the salt and pepper.

In a large cast-iron skillet over medium-low heat, heat the oil until it shimmers. Place the mushrooms in the skillet and sprinkle with half of the salt and pepper mixture and half of the capers.

Press (intermittently, if doing it by hand - you'll need to rest periodically) until a crust has formed, 10 to 15 minutes. The mushrooms will release varying amounts of liquid depending on their variety and freshness; unstack the cookware and pour it off a time or two during cooking, as needed. (Reserve the liquid for seasoning and sipping - it's delicious!)

Flip the mushrooms over, pour off any extra liquid, and sprinkle with the remaining salt and pepper mixture and capers. Cook the other side the same way, weighting and pressing intermittently until a crust forms on that side, 10 to 15 minutes.

Remove from the heat and serve hot, with lemon wedges for squeezing.