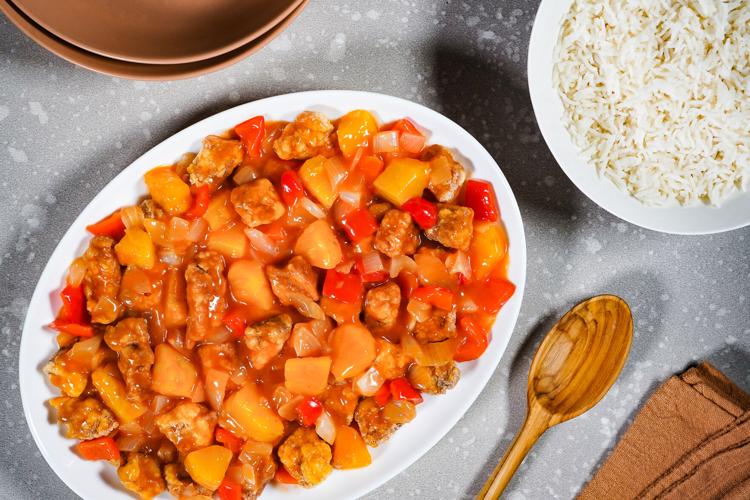 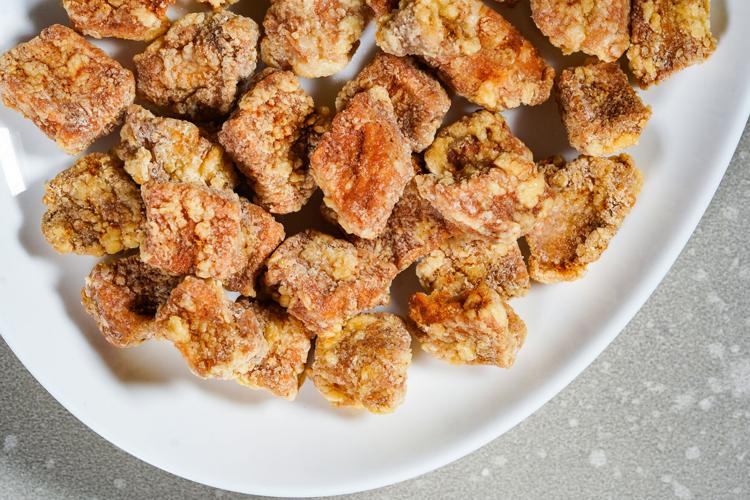 READY FOR THE SAUCE: The pork cubes are prepared and ready for the sauce. Jennifer Heffner/For The Washington Post

READY FOR THE SAUCE: The pork cubes are prepared and ready for the sauce. Jennifer Heffner/For The Washington Post

You know that feeling you get when you sit down at a favorite old restaurant and flip open the menu? You've had your favorite dishes so many times, that it feels like you're about to get together with an old friend.

I experienced that same sort of nostalgia-tinged tummy rumble when I flipped through "The Complete Chinese Takeout Cookbook" by Kwoklyn Wan.

Page after page revealed a dish I happily ate at Chinese restaurants as a child. So far, I've made the orange chicken, the sweet and sour pork (see the recipe), the fried spring rolls and the veggie wonton soup. Each delivered just what I was after, a familiar, delicious bite of the past.

When I told Wan how the cookbook made me feel, he said that was just what he was going for: "For anybody picking up the book, it's like opening your favorite takeaway Chinese restaurant menu and seeing it all in front of you."

But, unlike that menu, the cookbook helps you re-create those flavors yourself: "It's giving you the secrets behind the menu. There's no myth now. You really can create this menu at home."

Wan's grandfather immigrated to the United Kingdom from China in the 1950s and settled in Leicester, opening a restaurant in 1962 that served Chinese dishes, but because ingredients were hard to come by, featured mostly British ones. Wan's father, who married a British woman, worked there until he opened Leicester's first Cantonese restaurant in 1978. The family stayed in the restaurant business for years and as Wan and his siblings grew up, they all worked in those kitchens.

"I've never known life without my family cooking for other people," Wan said in a call from the U.K., where he was born and lives. "Not only did I eat the food and cook the food, but it was the food that put money on the table. These are the dishes that we were selling to our Western customers."

"This is my childhood," he said of the 200-recipe cookbook that is made up of 150 recipes from three previous cookbooks. "Every single dish - I have memories of cooking those dishes."

"The first book ["Chinese Takeaway Cookbook"] was kind of like therapy, as I was writing these recipes, I could remember so clearly the music that was playing, the sights, the sounds. It was a way of reconnecting with my childhood."

The book also includes 50 new recipes that are more like those you would find in an upscale Cantonese restaurant, he said. And, he said, he worked to make sure the book included lighter, healthier options, too.

Wan said that his training as a chef would allow him to write about East Asian dishes - those that inspired many of the dishes served in restaurants like the ones run by his family, but that wasn't what he was after. He hoped his cookbooks would have broad appeal because this food played a significant role in the childhoods of so many people who grew up eating in restaurants opened by Chinese immigrants.

"It's quite bizarre to think we've got these East Asian dishes that we all grew up with - White, Black, Chinese - regardless of your background, whether you grew up in America, in England or Germany, you'll have this memory. This food brings everyone together," he said.

As he worked on his latest cookbook, Wan researched to find out what dishes were still popular today in takeout Chinese restaurants. "It was like old friends coming back to the table and having a party. The dishes people were ordering in the 1980s, they're still ordering now."

He remembers, as a kid, yearning to be out with his friends rather than working in a hot kitchen, but he said his siblings' success is a direct result of being part of the family business.

Wan, who is working on a new cookbook due out in early 2023, has been a chef, restaurateur and Kung Fu instructor, and had his own cooking show on Amazon Prime, "Kwoklyn's Chinese Takeaway Kitchen," in 2021. His brother, Gok Wan, is a fashion consultant and TV celebrity, and his sister is an attorney. His parents are retired.

"What we learned is a work ethic," he said. "If you're going to break boundaries and do things, you have get off your backside and do it. You can't procrastinate.

"I'm a 49-year-old man now. The man I am now, I wouldn't have changed a thing - the life lesson we learned," he said. "We still joke with our parents that it was a form of child labor, but we completely understand it now."

Storage note: Refrigerate for up to three days.

1 cup orange juice (from about 4 oranges)

Make the sauce: In a medium saucepan over medium heat, stir together the juice, pineapple, bell pepper, onion, vinegar, sugar, tomato paste and ketchup, until well combined and bring to a boil, stirring occasionally. Reduce the heat to low, cover and simmer for about 5 minutes.

Meanwhile, in a small measuring cup, whisk together the water and cornstarch until combined. Slowly add the cornstarch slurry to the sauce, a little at a time, stirring continuously, until the sauce is thick enough to coat the back of a spoon. Cover and remove from the heat.

Make the pork: Line a plate with a towel and place it near the stove.

Pour enough oil into a large saucepan for the pork nuggets to float and heat over medium-high heat until the oil registers 340 degrees on an instant-read thermometer. (If you don't have a thermometer, test the oil by dropping in a small bit of cornstarch; if it immediately sizzles, the oil is ready.)

When the oil is ready, use a slotted spoon to lower the pork into the oil and fry until golden brown and cooked through, about 5 minutes. (The internal temperature should be 170 degrees.) Remove the pork and drain on the prepared plate.

Arrange the pork on a serving platter, spoon the sauce over it and serve with the rice on the side.