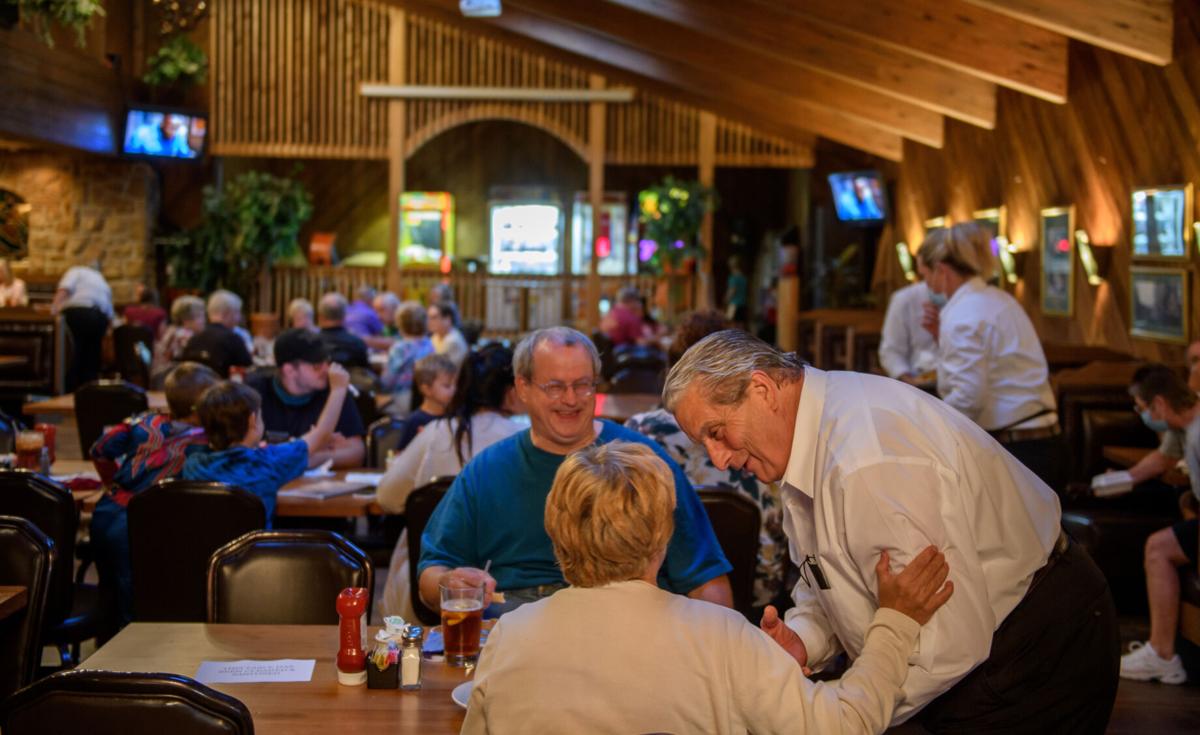 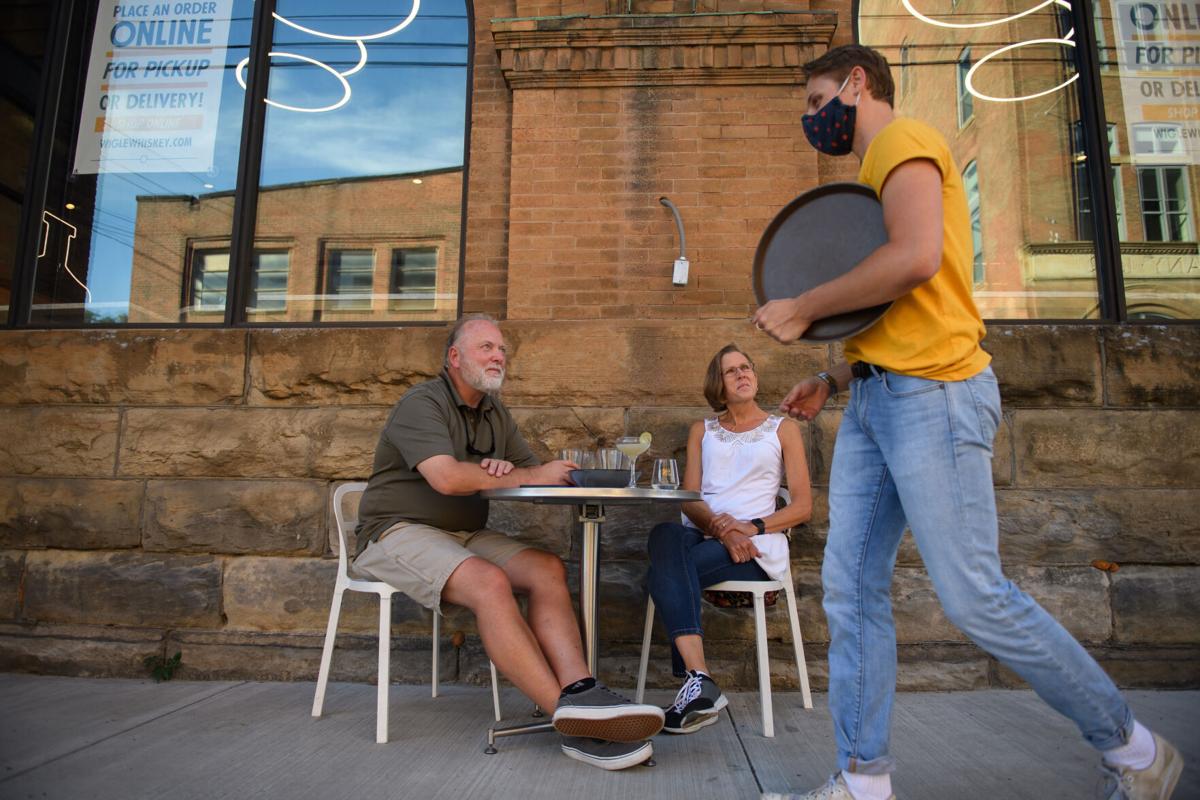 WIGLE WHISKEY: Kristen and Rush Burpee of Michigan relax with drinks outside Pittsburgh's Wigle Whiskey. Owner Meredith Meyer Grelli doesn't blame the state, but says, "We are bleeding money like anyone else." Jeff Swensen/For The Washington Post

WIGLE WHISKEY: Kristen and Rush Burpee of Michigan relax with drinks outside Pittsburgh's Wigle Whiskey. Owner Meredith Meyer Grelli doesn't blame the state, but says, "We are bleeding money like anyone else." Jeff Swensen/For The Washington Post

Nationally, jobs in food service and drinking places fell 49% from February to April. In Pennsylvania, the job loss was steeper, at 59%.

PITTSBURGH — Since 1959, Al's Cafe has been known for cold beer, hearty hoagies and the occasional coconut shrimp platter. But since the coronavirus outbreak, the Bethel Park eatery has become the staging ground for an unlikely anti-government rebellion.

First came complaints that owner Rod Ambrogi and his patrons were failing to abide by a statewide mask mandate imposed in July by Pennsylvania Gov. Tom Wolf, a Democrat. Ambrogi has since put on a mask, but he refuses to prevent customers from bellying up to the bar in defiance of state rules strictly limiting indoor dining.

"I can see (wearing) the mask now. But the rest of it is stupid," said Ambrogi, 74, who has rallied local tavern owners to defy the rules. "There are people going out of business every day around here."

Six months into the coronavirus pandemic, restrictions on dining have left restaurants and taverns across the nation struggling to stay afloat. Democratic presidential candidate Joe Biden has blamed President Donald Trump for a bungled pandemic response that has left at least 190,000 dead and millions unemployed. But in Pennsylvania, a crucial swing state Trump carried by just 44,000 votes in 2016, a debate is raging over whether the Republicans in Washington or the Democrats in Harrisburg bear more responsibility for the industry's economic pain.

Nationally, jobs in food service and drinking places fell 49% from February to April, according to Gus Faucher, chief economist for Pittsburgh's PNC Financial Services Group. In Pennsylvania, the job loss was steeper, at 59%. And in the Pittsburgh metropolitan statistical area, which includes seven counties in the state's southwest corner, those jobs plummeted by 62%.

While some have bounced back, July figures show that Pennsylvania bars and restaurants are still hurting. In Pittsburgh, only about a third of lost food and drink jobs have returned, leaving about 33,000 people still unemployed.

"Who are those 33,000 people out of work?" Faucher said. "And who are they going to hold responsible?"

For some, the answer is the governor. After closing restaurants and bars along with other nonessential businesses when the pandemic struck in mid-March, Wolf began permitting them to reopen this spring. But when the number of new infections began rising, the state health commissioner cranked up restrictions on indoor dining, a key vector of infection.

Under the new rules, alcohol could be sold only if customers also ordered food. Sidling up to a bar for a brew was forbidden.

Most infuriating to owners: Eateries that had been preparing to reopen at 50% capacity were suddenly told they would have to operate at 25% capacity. Pennsylvania is one of just three states to impose such severe limits, according to a database compiled by the National Restaurant Association, though some local jurisdictions have done so.

Many bar and restaurant owners say the state is denying them the right to earn a living. Rui Lucas, 45, who owns three restaurants in suburban Philadelphia, formed a trade association this summer to push for counties, rather than the state, to set coronavirus standards for bars and restaurants.

State health officials defend the decision to keep a tight rein on bars and restaurants, saying it is based on data, including information from people who tested positive after dining out. The number of new cases has fallen, and White House coronavirus response coordinator Deborah Birx praised the state earlier this month, saying only five others have a lower case count.

Still, Sarah Boateng, executive deputy secretary at the Pennsylvania Department of Health, said she understands the blowback. "I hear the frustration of the restaurant owners. I appreciate it," she said. "We know it's not been easy."

In general, state residents give Wolf good marks for his handling of the crisis. According to an August Monmouth University poll, 62 percent of Pennsylvania voters said the governor has done a good job, while more than half the state's voters – 53% – said they disapproved of Trump's handling of the virus.

But approval for Wolf's performance slipped from 67% in July. And the same survey showed Biden leading Trump by just four points – 49% to 45% – down from a 13-point advantage a month earlier.

'The general public has had enough of this'

Lara Putnam, a history professor at the University of Pittsburgh who monitors political activity on Facebook and other social media sites, said she sees "an intensity of agitation online, especially farther outside of metropolitan areas, to blame Tom Wolf" for the grim economic situation. The state's overall unemployment rate was 13.7% in July, the most recent available, significantly above the national July average of 10.2%.

"If you're a waitress who has lost all your hours," Putnam said, "who are you going to blame?"

Ambrogi, who so far has called back only 40 of 60 employees at Al's Cafe, knows precisely whom he blames. He blasts Wolf's restrictions on dining as "unconstitutional."

"Look, I know it's a bad virus. And no one wants to see anyone get sick," Ambrogi said. "But it comes to a point: The general public has had enough of this."

On Tuesday, with new infections down, Wolf granted restaurateurs a reprieve: Starting Sept. 21, they can operate at 50% capacity. But they will also have to stop serving alcohol at 10 p.m., an hour earlier.

"We wanted a ham and he gave us a hot dog," complained Ambrogi, a stalwart Trump supporter. Of the new time for last call, he said, "I don't know what that will mean" for business.

Since leading a local revolt against the restrictions, Ambrogi has corresponded with restaurant owners across the state. He said he has also written to Wolf and reached out to state lawmakers from both parties. Only Republicans responded, he said.

"Where are the Democrats? Are they waiting to make Trump look bad?" said Phil Catagnus, one of Ambrogi's brothers in arms and the owner of the Double Visions go-go bar outside Philadelphia. "We are the people stuck in the middle of this."

Because people can no longer drink without ordering food, Catagnus, 64, joked that he now sells "virus-killing hot dogs." Still, the restrictions on indoor dining are killing business, he said.

"I'm very grateful for being open. But the margins are so small," said Catagnus, who plans to vote for Biden despite feeling neglected by Democrats in Harrisburg.

"What's frustrating for bars and restaurants is they have been singled out, but there has been no effort to provide specific support," said Grelli, 35. "We are fortunate that we have bottle sales. But this capacity issue? No one builds a business to operate at 25% or 50%."

Grelli said that she doesn't blame the state for her problems but that she understands why many bar owners are angry.

The distillery "gave up on profitability a long time ago," she said. "We are bleeding money like anyone else."

Lawyer-turned-brewer Peter Kurzweg co-owns the Independent Brewing Co. and two other craft beer halls in Pittsburgh. He used to pack 120 people into his hipster beer room in the city's Squirrel Hill neighborhood on Friday nights. Today, he has no indoor seating because he thinks ventilation is key to controlling the virus.

Kurzweg, too, is unhappy with the statewide restrictions. "I have lost count of the number of good restaurants that have closed," he said.

But Kurzweg, 38, said he places greater blame on Trump. While countries like Germany kept the virus at bay and largely have returned to normal life, he said, the White House failed to gain control of the outbreak, allowing it to become a national calamity.

"I have mixed feelings about what the state did. They needed to find a happy balance," Kurzweg said. But "fundamentally, I attribute what we have now to a lack of a strong federal response and strong federal guidance."

It has been said that “our last mistake is our best teacher.” Read more