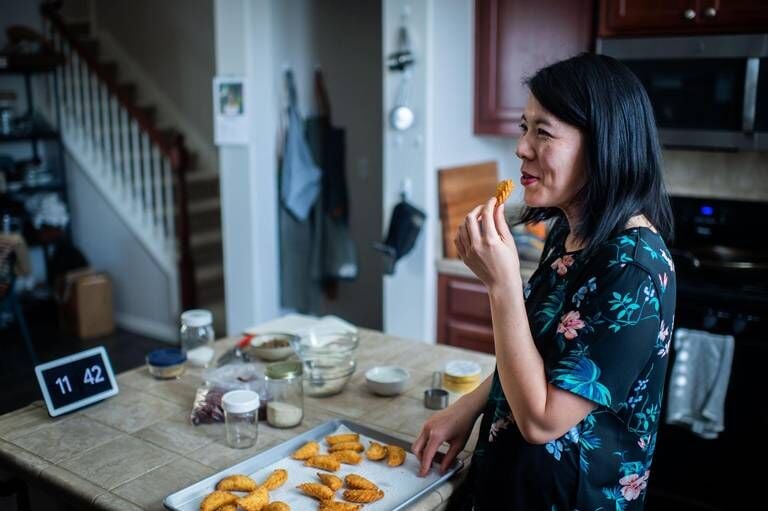 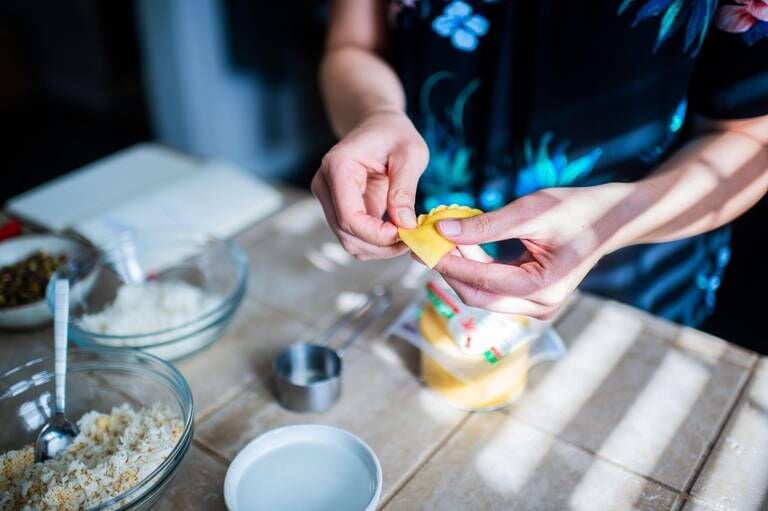 LIN: Food blogger Lisa Lin forms gok zai – a cantonese sweet fried dumpling – in her home in Natomas on Thursday, Jan. 21. She retests her recipes multiple times, including the ones inspired by her mother’s dishes. Daniel Kim/The Sacramento Bee

LIN: Food blogger Lisa Lin forms gok zai – a cantonese sweet fried dumpling – in her home in Natomas on Thursday, Jan. 21. She retests her recipes multiple times, including the ones inspired by her mother’s dishes. Daniel Kim/The Sacramento Bee

SACRAMENTO, Calif. — The video starts with a splash of hot oil, sizzling over a ceramic bowl of finely chopped garlic, scallions and grated ginger. When the oil hits the herbs, it gives off a crackle so crisp you can practically smell it floating off the screen, turning a handful of bubbling aromatics into ambrosia.

It's an Instagram video from Lisa Lin, 34, of "Healthy Nibbles and Bits," and she's showing you how to make ginger scallion oil, a classic twin to yellow-skinned Hainanese chicken.

It's this magnetic reel that draws people to her food blog, where her recipes span from innovations like Jamaican jerk tofu stir fry and gochujang chilaquiles to more traditional favorites like pineapple buns and siu mai.

"I started learning how to cook ... for my mom and my grandmother. Like even though my stuff looks ugly, I'm gonna try and help them," Lin said with a laugh.

Lin launched her blog in 2014, shortly before moving to Sacramento from the Bay Area with her husband, a lawyer, and her cat, Loki, who has his own Instagram account.

But it wasn't until 2018 that Lin went viral for a video she filmed with her mother Lan on how to make peanut candy. In the video, Lan, 75, coaches her daughter on how to melt the sugar in stages to achieve the candy's trademark snap.

What stands out immediately is Lan speaks Toisanese, with Lin pausing to translate. Compared to Mandarin and Cantonese, it's a less-common Chinese dialect to hear in the United States.

"There aren't as many Toisan-specific influencers, and so I think (readers) really appreciate it when they see food that I make, that my mom makes from (rural Toisan)," Lin said. "That part's very rewarding to me."

It's a level of connection many of her Asian American viewers can relate to – even if they don't know what all the words mean, they know their shape, how they feel and sound, the familiarity of the rhythm and cadence that goes straight to your chest.

Lin retests all her recipes multiple times, including the ones inspired by her mother's dishes. Older Asians tend to cook with instinct rather than precise measurements – good for highlighting personal kitchen skills, but not so great for passing down recipes to the next generation.

"When I go to develop recipes ... I keep in mind the frustration I felt when my mom would give me directions," Lin said. "If nobody takes on her recipes, then no one in my family is going to pass it on."

If Lan's presence is a rooting force for Lin's work, then Lin's recipes and videos are the guiding hand that offer Asian Americans across the diaspora a chance to reconnect with their roots, to feel a sense of belonging in the culinary world. It's a reminder to many Asian Americans that our food and our culture are worth preserving, no matter how far removed they might feel from it.

From law school to food blogging

Lin was born in 1986 in Portland, Oregon, the youngest of four born to immigrants from Toisan, China. After graduating from law school at George Washington University and passing her bar exam, she and her husband moved to the Bay Area around 2014, where she settled in to look for a legal job.

Law school was the goal Lin worked toward her entire academic life, although she'd long had a feeling the career wasn't right for her. To escape the growing sense of dread and uncertainty over pursuing law, her husband suggested Lin try food writing.

And so in February 2014, "Healthy Nibbles and Bits" was born. At that time, Lin hadn't even considered doing Chinese recipes yet, instead simply following the general trends of food writing at the time, which were healthy, gluten-free types of recipes.

If the name sounds somewhat removed from Lin herself, that was on purpose. When she first launched her site, she deliberately chose a website name that couldn't easily be associated with her name online; most of the people in her life still thought she was actively looking for a legal job, and she was initially embarrassed at the thought of abandoning all her years of schooling, networking and internships to pursue food writing.

But a passion is a passion, and it only took a few months for Lin to realize that the joy she found in her side project was far more than her legal jobs had ever brought her.

"I had this moment where I was talking to myself and said, 'I just know that if I am passionate about something ... I will figure out a way to succeed in it,'" Lin said. "Finding something that I finally really enjoyed helped speed up that decision-making process."

Making the decision to pivot from law to food writing was easier than what came next – telling the people in her life.

"My mom was constantly, constantly asking me to still find a legal job, and it wasn't until like maybe a year or two ago that she finally stopped," Lin laughed. "She (was) like, 'Okay fine, you do whatever you're passionate about, but still try to find a job.'"

While teaching herself food photography and scouring other bloggers' advice on how to boost a website, Lin also wrestled with what kind of recipes she really wanted to create. She'd started out with healthy foods because it made for popular content at the time, but after about two years she admitted to herself that it just didn't fulfill her.

That's when she got the idea to lean more into the food she personally cared about – Asian recipes she grew up making and eating with her mother. It was an idea she'd casually considered before, but dismissed, fearful that her blog would be overlooked or deemed too exotic by a mainstream audience.

"When I first started blogging, a lot of people would say, 'Oh, don't box yourself into a niche, because you'll only be known for that,'" Lin recalled. "But when I started cooking more Asian food, more people responded to it."

Bringing her mother onboard for video recipes was the turning point, especially among Toisanese American viewers, for whom Lin's mother resonated as a reminder of the older Asian female figures in their own lives. Her mother's popularity led to a separate Instagram account, @hellomamalin, highlighting more personal moments like her devotion to the Golden State Warriors or her noodle-rolling technique.

Lin said it can sometimes be stressful to work with her mother, who cooks from the heart rather than standardized measurements, and editing the videos afterward is always an ordeal. But the reward is recipes and cooking videos that feel genuine, personal in the way that lingering in the kitchen with your family feels.

"Interacting with people who watch the content that I make with my mom's videos is the best," Lin said. "What I enjoy the most is engaging with my followers. ... That part's very rewarding to me."

Finding and fighting for an authentic voice

Authenticity drives Lin's blog, but it's sometimes been a fraught concept in the food world. Many mainstream food writing outlets have been criticized for appropriating recipes from other cultures, or stripping them of their cultural specificity in misguided attempts to market them for wider audiences.

But the enormous response Lin has received for her Chinese recipes and videos with her mother proves that what readers are craving is a personal connection, the kind that only comes across when recipes are developed by creators who actually grew up eating that food, surrounded by the culture they came from.

That connection, that engagement from readers who tell Lin about the ways her recipes brought them home, is what drives her to keep developing Asian recipes, she said.

"To have people tell me either the food looks familiar to them, or that my mom looks like their mom ... that part is definitely my favorite," Lin said. "Engaging with my followers has made me realize how few personalities there are out there who are similar to me."

Lin imagines a cookbook co-written with her mother, and a stronger YouTube presence. But for now, Lin's main plan is to keep striving to find the joy in her recipe testing and keep engaging with readers. One idea is arranging virtual cooking classes.

"I really want to just constantly be curious about different types of cuisine," Lin said. "There's a lot of popular Asian recipes out there, but not enough that are created by people who actually grew up with that food. ... I would like to just ... be an authentic voice presenting this. I care a lot about that."

If Lan's presence is a rooting force for Lin's work, then Lin's recipes and videos are the guiding hand that offer Asian Americans across the diaspora a chance to reconnect with their roots, to feel a sense of belonging in the culinary world.