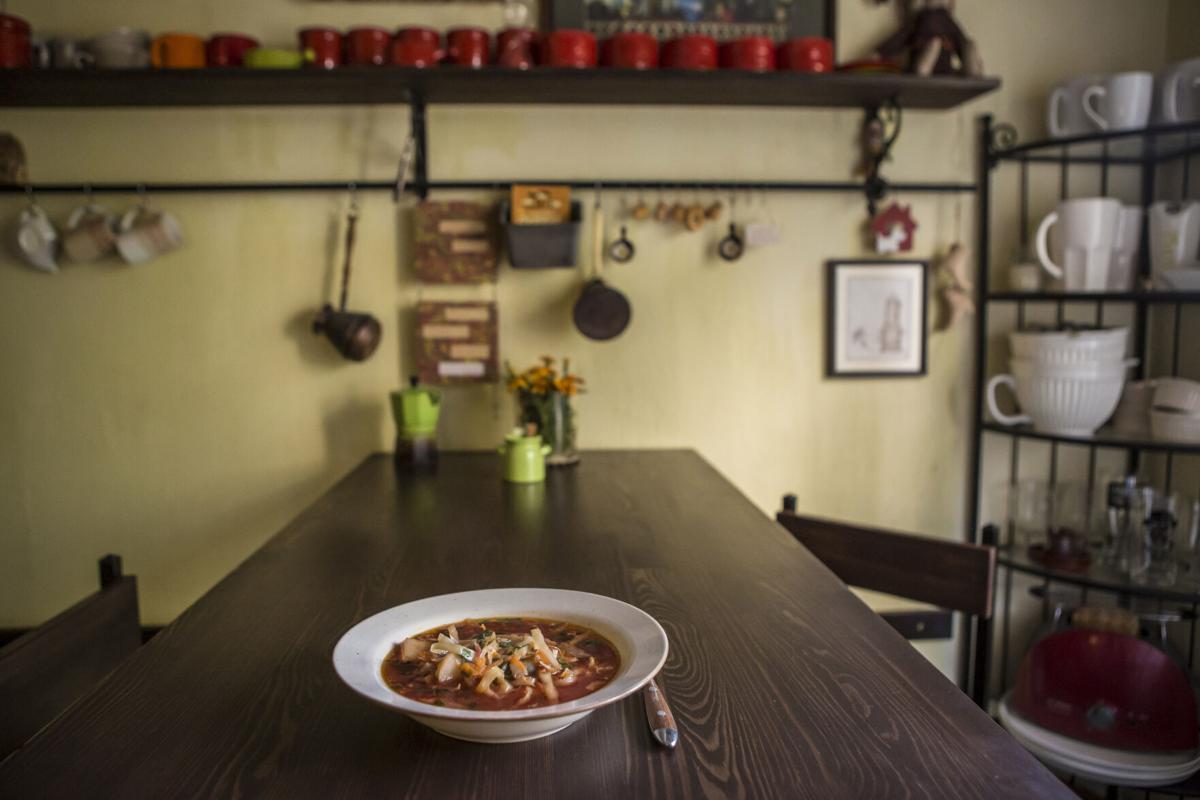 CAUGHT IN THE MIDDLE: A bowl of borscht freshly cooked by Oksana Chadaieva as seen Oct. 15 in her kitchen in Kyiv, the capital of Ukraine. Oksana Parafeniuk/For The Washington Post 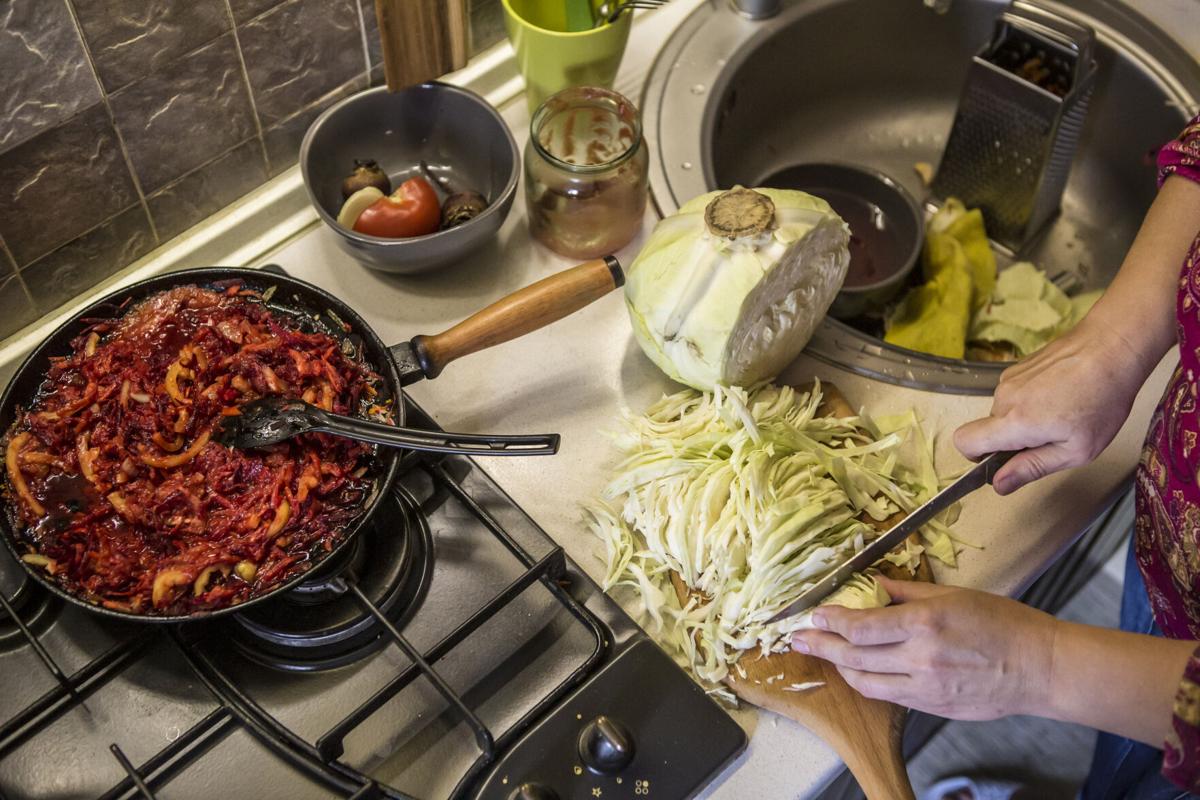 FAMILY RECIPE: Oksana Chadaieva chops a cabbage in her kitchen as she prepares borscht. Chadaieva loves to cook borscht using the recipe of her mother and grandmother. Oksana Parafeniuk/For The Washington Post 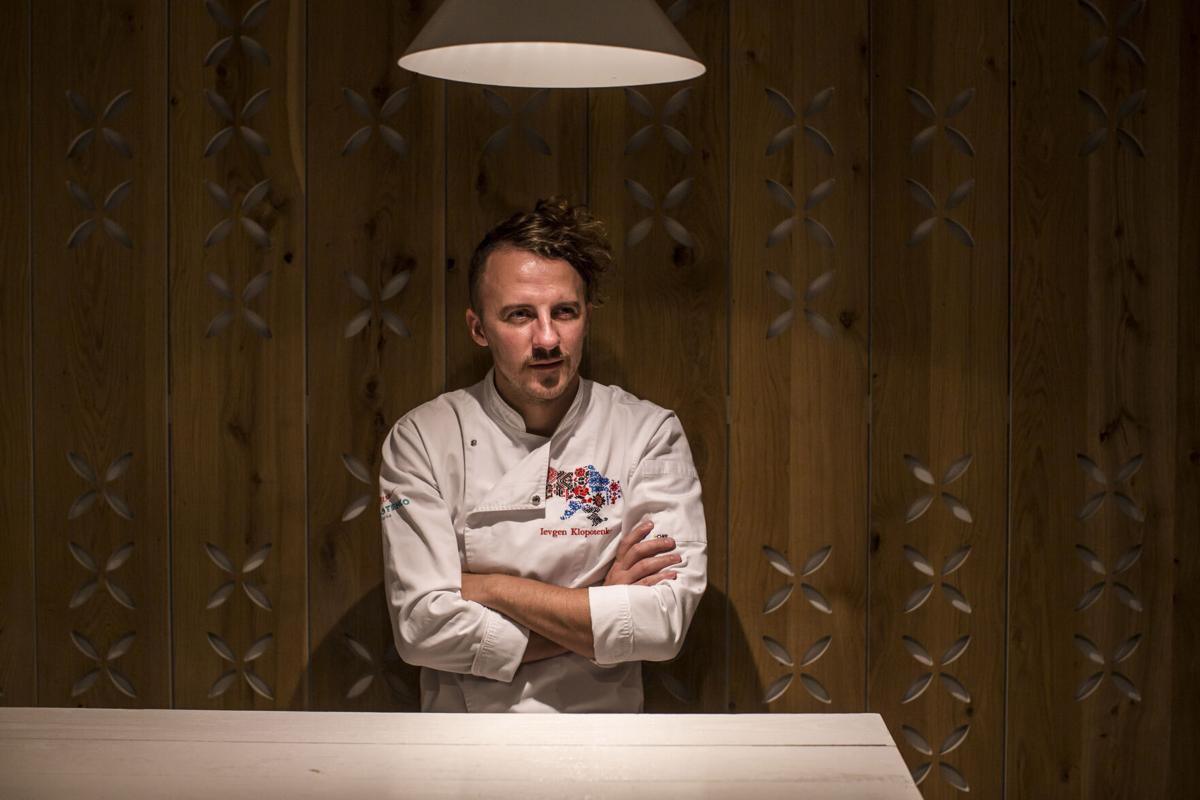 KLOPOTENKO: Ievgen Klopotenko, 33, a chef and a co-owner of the Ukrainian restaurant 100 Years Ago, Forward, seeks to have borscht recognized as part of Ukraine's cultural heritage by the United Nations' cultural agency. Oksana Parafeniuk/For The Washington Post 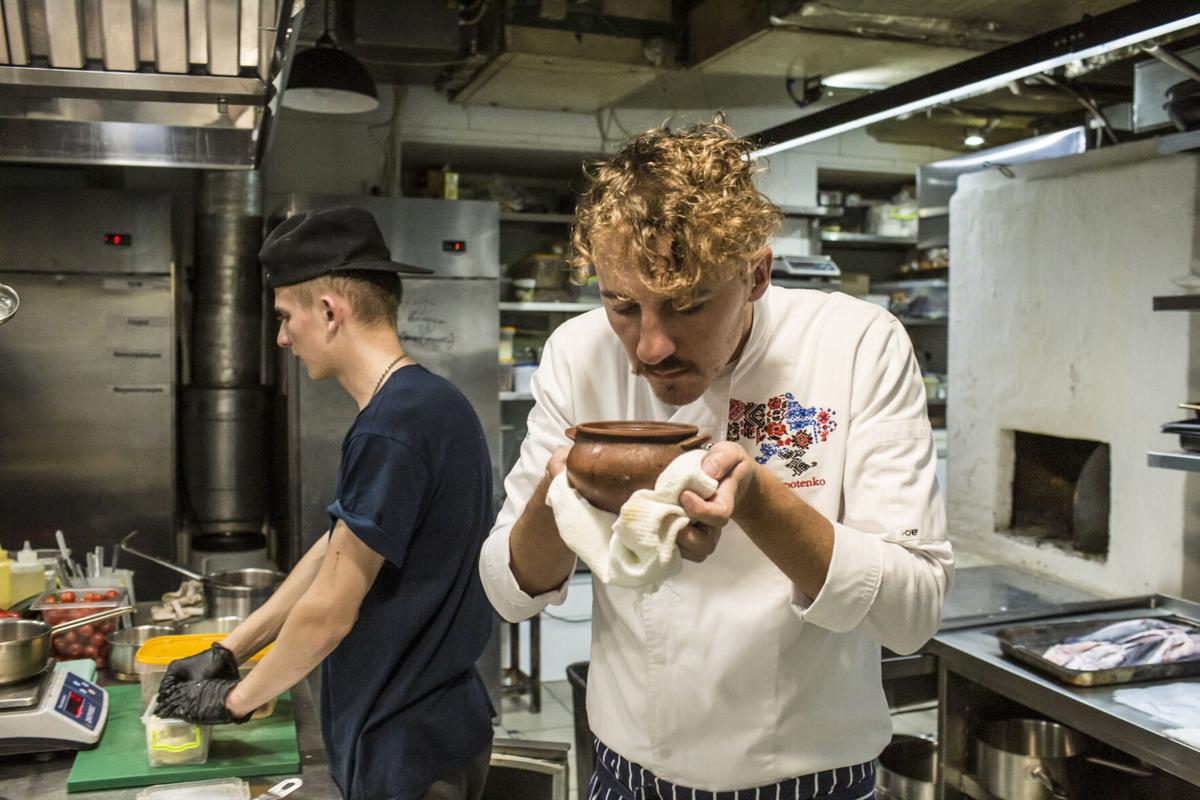 IN THE KITCHEN: Klopotenko smells a pot of borscht. Oksana Parafeniuk/For The Washington Post 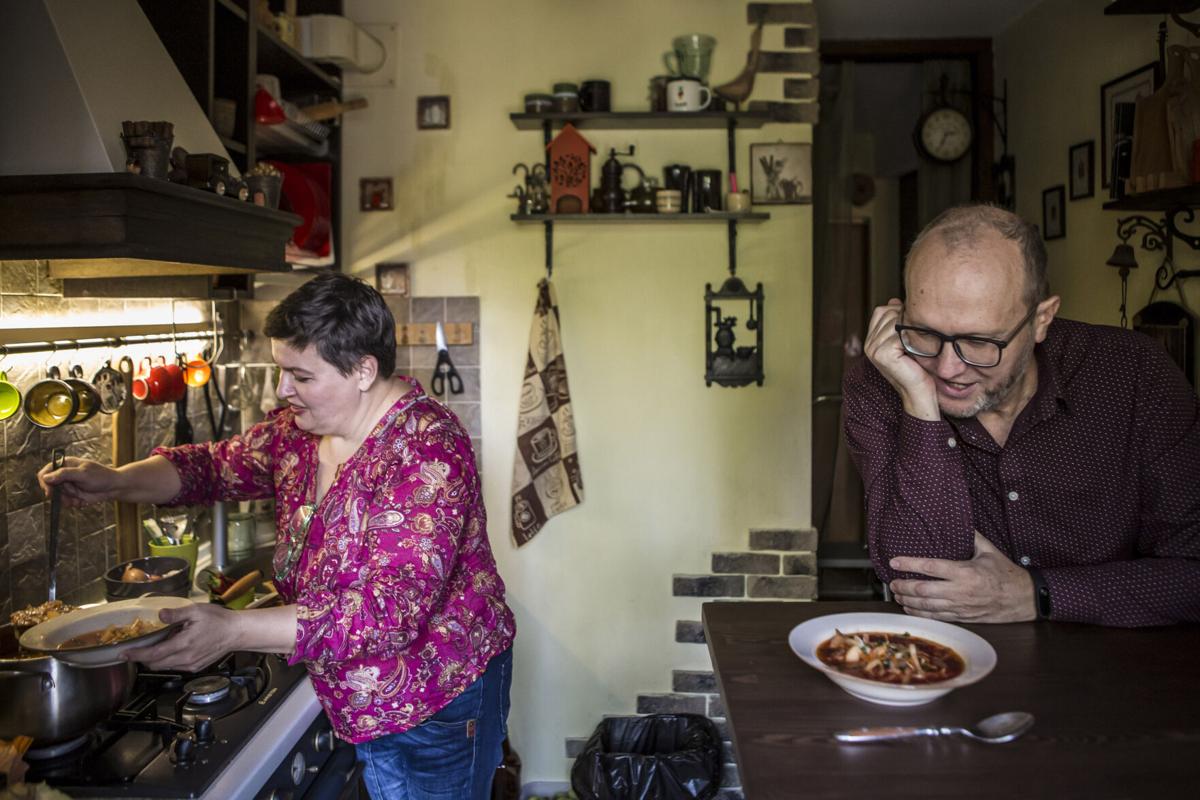 FOOD FOR THE FAMILY: Oksana Chadaieva, 50, ladles borscht into a bowl for a meal with her family in Kyiv. Oksana Parafeniuk/For The Washington Post

CAUGHT IN THE MIDDLE: A bowl of borscht freshly cooked by Oksana Chadaieva as seen Oct. 15 in her kitchen in Kyiv, the capital of Ukraine. Oksana Parafeniuk/For The Washington Post

FAMILY RECIPE: Oksana Chadaieva chops a cabbage in her kitchen as she prepares borscht. Chadaieva loves to cook borscht using the recipe of her mother and grandmother. Oksana Parafeniuk/For The Washington Post

KLOPOTENKO: Ievgen Klopotenko, 33, a chef and a co-owner of the Ukrainian restaurant 100 Years Ago, Forward, seeks to have borscht recognized as part of Ukraine's cultural heritage by the United Nations' cultural agency. Oksana Parafeniuk/For The Washington Post

IN THE KITCHEN: Klopotenko smells a pot of borscht. Oksana Parafeniuk/For The Washington Post

FOOD FOR THE FAMILY: Oksana Chadaieva, 50, ladles borscht into a bowl for a meal with her family in Kyiv. Oksana Parafeniuk/For The Washington Post

But that's what happened after 33-year-old Ievgen Klopotenko fired the equivalent of a gastronomic cannon shot: starting an effort to have borscht recognized as part of Ukraine's cultural heritage by the United Nations' cultural agency.

To the uninitiated, borscht is a humble, reddish beet soup, often served with a generous dollop of sour cream on top. But in its simplicity is a cultural significance that transcends borders.

A pot of borscht, simmering away on the stove during the long winter months, is a mainstay across many parts of Eastern Europe, and a cornerstone of the region's concept of home and hearth.

Many countries claim the dish as central to their culinary tradition. However, what has previously been a debate on low boil now threatens to bubble over.

The disagreement over who is steward of borscht heritage has primarily been between Kyiv and Moscow – amplified since 2014 by Ukraine's battle against Kremlin-supported militants in its East, a conflict that has killed more than 13,000 people over six years.

Klopotenko said that his actions were inspired by the commonly held impression outside of Ukraine that borscht is a Russian dish. A tweet from the Russian Foreign Ministry last year called the soup one of the country's "most famous and beloved dishes."

"Russia, as usual, is changing the facts. They want to make borscht their own. But it's not true," Klopotenko said on the terrace of his Kyiv restaurant, which specializes in modern-day versions of traditional, and sometimes long-forgotten, Ukrainian dishes.

But he doesn't fear any Russian repercussions for his UNESCO campaign. "They're already at war with us," he said. "What's the worst they can do?"

His campaign to place Ukrainian borscht on UNESCO's world heritage list began earlier this year, seeking to join a list that includes multinational traditions such as the Mediterranean Diet and niche regional dishes such as Malawi's nsima, a thick porridge of maize flour.

The first step was to have it recognized by Ukraine's Culture Ministry as a part of the country's "intangible cultural inheritance."

He gathered a team of a dozen experts, culinary historians and ethnographers, who collected recipes from 26 Ukrainian regions, including Crimea, which Russia annexed in 2014.

The materials they assembled included photos and documentary evidence that the recipes had been passed down among at least three generations in one family.

And although the base ingredients remain the same, each version of borscht reflected the regions' various gastronomic cultures – and each family's own twist on the dish.

"But then people make their own additions," she continued. "Some add mushrooms, or dried vegetables, apples, pears, meat, and in one region they add wild boar's blood, which makes the borscht very dark."

Klopotenko contends that borscht originated in what is now Ukrainian territory. Originally, it was a borscht-like soup, but without the beets. Later, beets were introduced to the area, and in the early 18th century, the first borscht recipes were written down.

Earlier this month, Klopotenko and his team presented the Ukrainian Culture Ministry's expert commission with their results, which included five liters of the soup. To no one's surprise, the commission approved borscht's inclusion in the ministry's own cultural heritage list.

"The Culture Ministry's list up to now has consisted of items that are particular to a particular region," Sobotiuk said. "This is the first time that there's an element that unites the whole country."

The Ukrainian government plans to submit materials to UNESCO next year. What comes next is anyone's guess.

UNESCO officials in Paris said that Ukraine has another submission – for a Crimean Tatar ornament – to the world heritage list waiting for a decision, and the documents for borscht must wait until this process is finished. The review usually takes around two years, UNESCO officials said.

Although Ukraine hopes to lay its claim to borscht as quickly as possible, UNESCO officials say that the door is still open to other countries mounting their own applications in the future. The organization lists for example different versions of the Middle Eastern flatbread known in parts of the world as lavash.

A dispute over who really owns the bragging rights to borscht threatens to draw in not just Ukraine and Russia, but also Poland and other countries in the region.

But it's not the first culinary spat.

There was a "hummus war" between Lebanon and Israel earlier this decade, which culminated in the two countries vying against each other to create the largest "dish of hummus" for inclusion in the Guinness Book of Records. (Lebanon won.)

Marianna Dushar, a Ukrainian doctoral student in social anthropology who is co-writing a book on borscht, said that it should not come as a surprise that food becomes a focus of our cultural aspirations, and sometimes a placeholder for other tensions between countries.

"Food, like language, is the first and last cultural bastion," she said by telephone from the western Ukrainian city of Lviv. "We grow up with it, and we associate ourselves with it. Countries communicate with other countries through food."

On the Russian side, a few voices are calling for compromise.

Boris Akimov, restaurateur and a pioneer of Russia's farm-to-table movement, said borscht did not really belong to anyone.

"We cannot say it's Ukrainian or Russian," Akimov said. "Borscht is very popular now and it was very popular 200 years ago in Ukraine and Russia. I hope that borscht can be a thing that unites these countries but does not divide."

Some prominent Russian culinary figures are even ready to concede on one front: that Ukrainians make the best borscht.

Viktor Belyaev worked 30 years in the kitchens of the Kremlin cooking for Soviet leaders and is now president of the Russian Culinary Association. He does not care to debate the origins of the dish, but he immediately grows wistful thinking of a bowl of Ukrainian borscht topped with a generous blob of minced salo (cured pork fat) and garlic.

"I'm dreaming of such borscht," he said. "I can't wait to eat it. It is so delicious, especially if you have had a few drinks beforehand."

"The most important thing is that we eat together and taste our dishes," he adds. "You know when people sit at the dining tables the cannons are silent."

'There has to be borscht'

But for Ukrainians like Oksana Chadaieva, the option of sharing borscht's patrimony is not on the table.

"I completely support Klopotenko's initiative," she said. "Borscht 100% has nothing to do with Russia."

In her cozy kitchen in the capital, Kyiv, Chadaieva prepares a pot of her version of borscht for lunch for her husband, Serhii, and 14-year-old son, Orest.

As she chops the ingredients, she reveals her secret component, passed down from her grandmother: marinated and salted tomatoes, which she converts to a paste and cooks in a pan with other vegetables.

When the soup is ready to serve, its aroma permeates the apartment like a delicious wave.

For Chadaieva, borscht and home are synonymous.

"The women of my family always believed that if there's no borscht in the home, then there's nothing to eat – there has to be borscht."