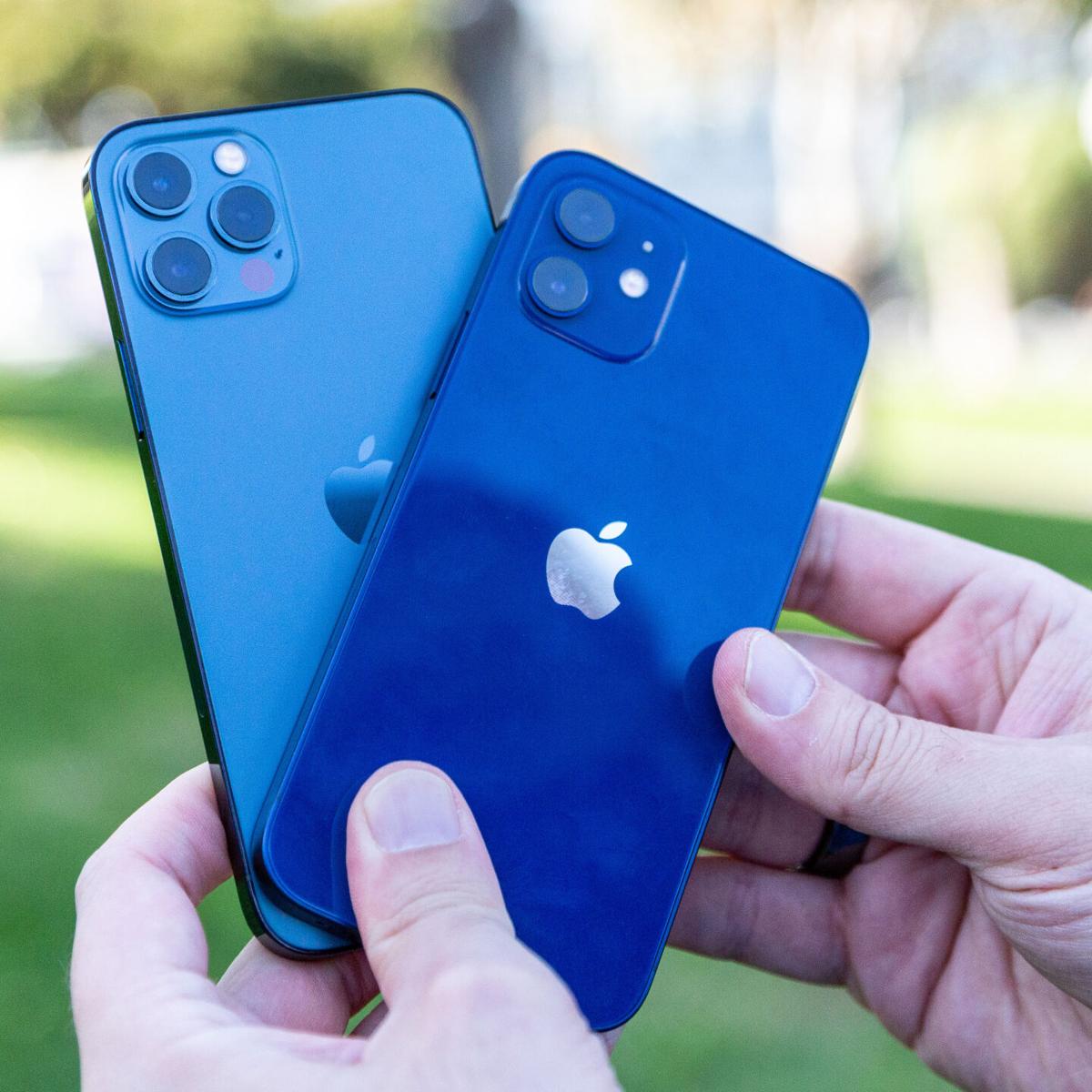 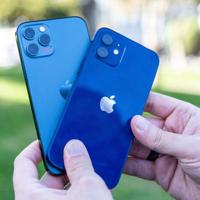 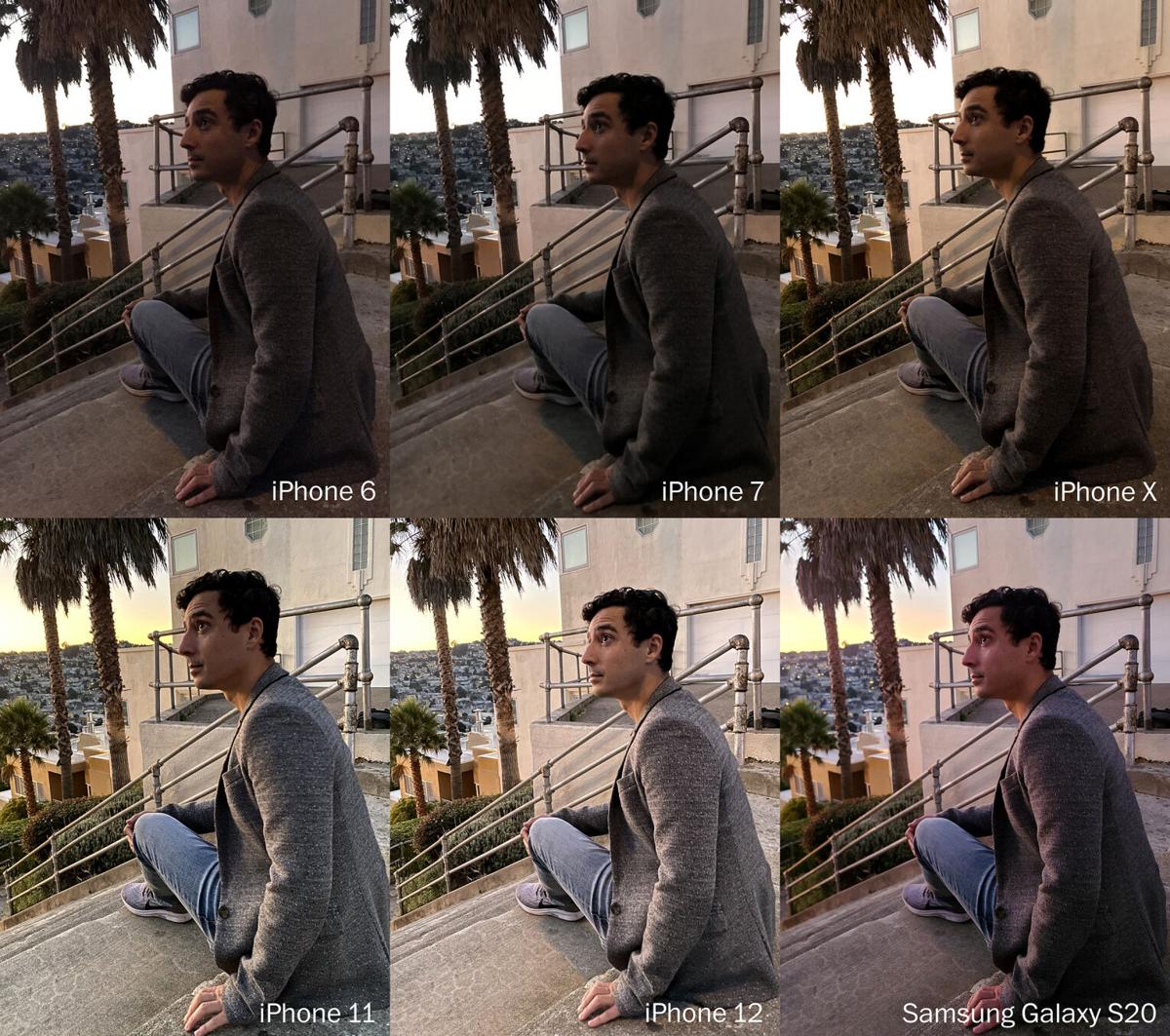 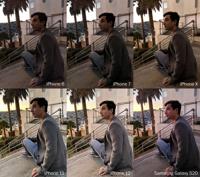 TRICK OF THE LIGHT: In tricky situations like a sunset, the iPhone 12 balances the subject and background - but not much better than last year's iPhone 11. Geoffrey Fowler/The Washington Post

TRICK OF THE LIGHT: In tricky situations like a sunset, the iPhone 12 balances the subject and background - but not much better than last year's iPhone 11. Geoffrey Fowler/The Washington Post

The new iPhone 12 doesn't need 5G to be a good smartphone. That's lucky.

I've been testing the iPhone 12 and 12 Pro, the first Apple phones capable of running on next-generation cellular networks. Apple CEO Tim Cook, and endless commercials, tout 5G as the "super fast" upgrade you've been waiting for.

Not so fast. At home smack in the middle of San Francisco, my download speeds with an iPhone 12 are only a teensy bit faster than I get on last year's 4G iPhone. We're talking no more than a 6 Mbps improvement.

However, there may be other reasons you should consider an iPhone 12: a newish flat-edge design, hardened glass, a snappier processor and (especially) a better camera. To figure out what's actually useful, I got some help from you.

Hundreds of Washington Post readers wrote me after Apple unveiled the iPhone 12. So to review the new phones, I'm answering your questions directly. I used your good suggestions to guide me as I ran around snapping test photos and comparing downloads across three networks on nine different phones. (Please keep the questions coming.)

So far, I've only been able to test the "normal"-size iPhone 12 and 12 Pro, which arrived in stores on Friday. A new mini model and Pro Max won't arrive until mid-November.

Some of Apple's claims will take more time to verify. For example, I couldn't throw my test phones onto concrete to test screen strength, but I look forward to hearing what havoc your children wreck. Battery life, which Apple claims is about the same as last year's phones, will also largely depend on how much you use power-hungry 5G.

My personal takeaway: I'm sticking with my existing iPhone 11 Pro Max for at least the next year. 5G service just isn't useful in the areas in which I spend time - especially during the pandemic. And while I obsess over photos more than most people, the differences between the iPhone 11 and 12 cameras aren't worth a new phone.

But enough about me. Let's get to you.

What if I need a new phone now?

"I really have no choice but to upgrade as I have a 6S tethered to a power cord and outlet," writes Pam Renney from Evergreen, Colo. "I don't think I can wait another year."

Mind you, worn-out batteries and broken screens can be replaced, usually for less money than buying a whole new phone. But I get it - sometimes you're just ready to upgrade.

Buying an iPhone 12 now is a kind of futureproofing. You'll be covered for the 5G network technology that's going to be around for the life of the phone - even if you once again hold on to your iPhone for five or more years.

Just one caveat: As 5G develops and we get new uses for it - say, augmented reality Apple glasses that get service via your phone - you might need to upgrade again to take advantage of the newer 5G possibilities.

And the truth is, if you haven't upgraded in a few years, the camera improvements alone might be all the incentive you need.

Can I save money by getting an older model?

"Everyone tells me I can just get an 11 for much less which will be as good or almost as good as the best 12," writes Laura Haggarty, from rural Kentucky.

That's true. 5G isn't coming to people like Haggarty anytime soon, so the iPhone 11 is a good deal now at $600. Or you can spend even less - $400 - on this year's iPhone SE, which is just as fast as the 11. (Bonus: The SE is the last iPhone that still has a fingerprint reader, so you'll be less frustrated using your phone while wearing a mask.)

If you had an 11 and a 12 in each hand, like I do now, the difference you'd feel is a new design. The 12 brings back something iPhones haven't had for years: squared-off edges. It makes the phone feel more sophisticated and easier to hold. Apple also cut away some of the excess along the edges, so it's a bit lighter and more compact.

The 12 has a new processor, which I suppose feels a bit faster, but I'm not sure I could spot it in a blind test of the apps I use every day.

The 12 also works with a new kind of wireless charger called MagSafe that, as the name implies, magnetically snaps into place. That's nice, but involves buying even more new stuff from Apple, which is the opposite of saving money.

How much better is the 12 camera?

"I also care a lot about camera quality," writes Kristan Dietz, from Hoboken, N.J. How does it compare, she said, to the three-year-old iPhone X?

If you're considering upgrading from a much older iPhone, it's like day and night. Literally: When you compare night shots side by side, even three-year-old phones take dark photos and the 12 makes them look bright like daytime. That's thanks to the iPhone 12's new wider aperture and "night mode" (first introduced with the 11) that combines the best parts of multiple shots for a final image your naked eye wouldn't have seen. Compared with older models, both new iPhones also come with a separate ultrawide lens that's good for drama.

Between the 11 and 12, the camera improvements are more subtle. The 12's dark scenes come out brighter and with less noise. Apple extended night mode to the front selfie camera. And the 12 Pro has a new depth-detection sensor, which helps it focus correctly, particularly when you're doing portrait-style shots with blurry backgrounds.

If you pay $200 more for the Pro model, you get a third lens on the back for telephoto, or zoom, shots. But the iPhone 12 still isn't great at zoom. On the upcoming iPhone 12 Pro Max model only, Apple upped the third lens from 2 times optical zoom to 2.5 times - a far cry from what we're now seeing other phone makers like Samsung do with telescoping lenses.

When will 5G be a real thing?

Don Cremin, from Salinas, Calif., asks the billion-dollar question: "When can I expect 5G to be truly fast?"

Fast is, of course, a relative term. In my tests, I found one street in a part of town where I wouldn't normally dawdle where I got insanely fast downloads of 3 Gigabits per second (that's 3,000 Mbps) on the Verizon network. In other spots on AT&T, I got 750 Mbps, and on T-Mobile 300 Mbps.

But the "nationwide" 5G that America's three large carriers are selling today isn't usually like that. Most of the time my iPhone 12 showed 5G available, downloads weren't much faster than on the 4G LTE phone in my other hand.

For most of us in or near cities, 5G will more likely feel "truly fast" at some point in late 2021. That's my takeaway from conversations with industry analysts. By then, of course, there will be a new, even more fabulous 5G iPhone to buy.

If you live in a rural area, fast 5G is going to take even longer to arrive. The speediest form of 5G, known as millimeter wave or Verizon's ultra wideband, only travels short distances so requires building a lot of infrastructure. It also generally doesn't go through walls, so even if it is available on the street where you live, you won't benefit inside.

What's most telling: Apple and the carriers don't yet have a compelling argument for why we need 5G on our phones. It's - eventually - faster, yes, but how often do you need to download an entire season of "Game of Thrones" on a street corner? I don't doubt exciting new 5G applications will come along - again, eventually.

Wait, my older iPhone says it already gets 5G

"My 11 Pro very plainly says 5G next to my signal strength status bars," writes Charles Hardwick, from New York City. "What am I missing here?"

Unfortunately, that's more carrier smoke and mirrors. AT&T made older phones say 5G up top, but right next to it is a tiny letter "E." That's the company's term for its existing "enhanced" 4G LTE network, which it says lays the groundwork for its nationwide 5G coverage - but isn't actually 5G.

I wish I could run the eye roll emoji in print.

How do you know when it's time to upgrade?

"My iPhone 6S Plus is still going strong, but I had heard that with Apple's next release, it would no longer be compatible with the newest OS upgrade," said Donna Schwartz Mills, in Los Angeles. "If that's true, I think I need to upgrade?"

These days, upgrading an iPhone is mostly a question of when, and how much you want to spend.

Holding on to a phone for three or more years is now completely normal. Phones have been getting more expensive, without getting a whole lot better. Apple is stuck in a cycle of trying to market some flashy new iPhone feature each year - something it gave up trying to do on Mac laptops.

You need a new iPhone when yours isn't doing what you want anymore. For many people, that happens when you crack the screen beyond repair, or when you feel you're taking photos that are inferior to your friends'.

When Apple drops support for your phone in iOS upgrades, that's a sign you might soon be missing out on the latest apps, security or new features like this year's coronavirus exposure notifications. The latest iOS 14 supports phones as old as 2015's iPhone 6S, and it's fair to assume that next year's iOS could drop support for it. For anyone still on a 6S, that means you have at least another year.

Are we trapped in Apple land?

"Why ask if a new Apple product is worth it," writes Brian Cornelius from Los Angeles. "The old ones quickly become obsolete by design, and soon we have no choice."

A number of you said you feel trapped with your iPhone. Wrote another reader: "Recall the invasion of the body snatchers. We will do anything Tim Apple suggests. Be very afraid."

It's true that most people no longer comparison shop for phones. Now we're members of iPhone and Android tribes. Apple puts a lot of effort into keeping us members, with services such as iMessage, iCloud Photos and other services that make switching way more trouble than most people would ever consider. I call it the happy trap.

In Silicon Valley, this is usually the point where either some new technology comes along and disrupts the old guard - or the government steps in and lays down rules that give some power back to consumers.