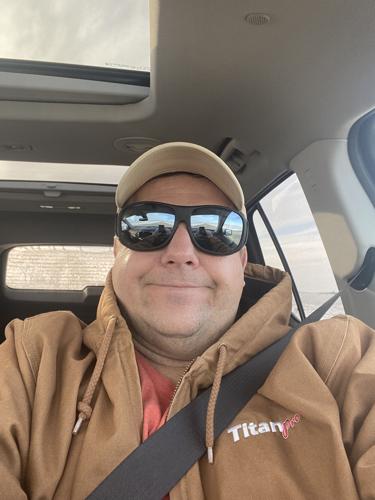 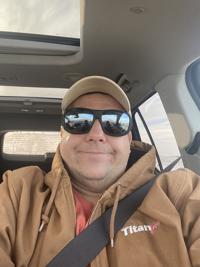 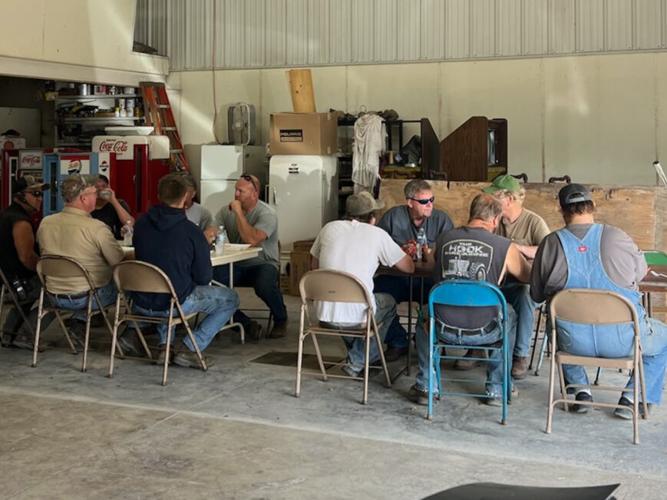 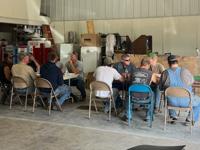 'IT'S WHAT PEOPLE DO HERE': Farmers from Frost, Minn., and surrounding towns have lunch before harvesting Legried's crops. Photo courtesy of Lori Osland 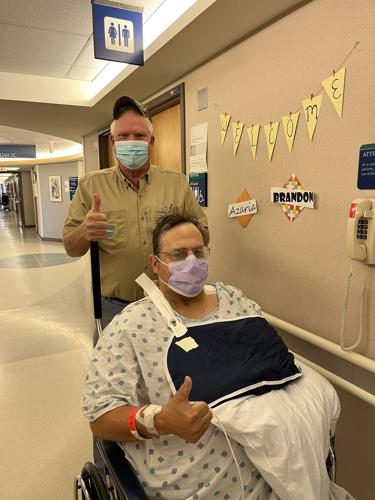 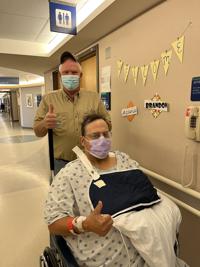 TAKING A SPIN: Tim Steier visited Legried in the hospital and took him for a spin after his shoulder surgery in August. Photo courtesy of Tim Steier

'IT'S WHAT PEOPLE DO HERE': Farmers from Frost, Minn., and surrounding towns have lunch before harvesting Legried's crops. Photo courtesy of Lori Osland

TAKING A SPIN: Tim Steier visited Legried in the hospital and took him for a spin after his shoulder surgery in August. Photo courtesy of Tim Steier

Scott Legried was driving to pick up some gravel in the small farming community of Frost, Minn., in mid-August when a German shepherd puppy ran into the middle of the road.

Legried swerved to miss the dog, sending his vehicle off the road and into a cornfield.

"I got knocked out and when I came to, I couldn't move," he said. "I couldn't even reach up to get my cellphone from the dash of my truck. I remember saying, 'Lord, I'm going to need some help here in the next five or 10 minutes.' "

A woman who was driving through the area came upon the scene and called 911, he said.

Legried went to a hospital with a broken shoulder blade and collarbone, seven broken ribs, two cracked vertebrae, a collapsed lung and a concussion.

When doctors told him he'd need several months to recover before he could drive a tractor, Legried - who lives alone and maintains his farm on his own with the occasional help of two seasonal workers - said he could think of only one thing: The October harvest was just six weeks away. How would he bring in his 600 acres of soybeans and corn, his only source of income?

His answer came Oct. 4, when more than a dozen farmers from Frost and surrounding towns showed up at Legried's farm with their combines, trucks and grain wagons and made short work of harvesting his soybean crop. They then told him they would return later in the month to bring in his corn.

"This is a busy time of year for farmers, so it meant the world to me," said Legried, 50. "But I guess I really wasn't surprised. I'm lucky to live in a community where people have always looked out for each other."

'A pay-it-forward kind of town'

Legried is a third-generation farmer from Frost. He said he also was the recipient of his town's kindness 11 years ago when his father died of cancer at harvest time, and friends and neighbors rallied to bring in the family's corn crop.

"It's what people do here," he said. "When somebody offers you help here, you know you should take it. Because it comes from the heart."

Frost, which has a population of 198, is a town with one bank, one restaurant and one church. It's in south-central Minnesota, about five miles north of the Iowa border.

Erin Beske, the coordinator of the town's annual Frost Fest, said it's the kind of place where "you go out for a short walk and it takes five hours because everyone has to stop and talk to each other."

"It's a pay-it-forward kind of town," she said.

Beske, 44, said her small town consistently helps anyone in need, whether there has a been a death in the family or someone is simply going through a rough patch and needs a little support.

"Everyone has strength in this community and they're more than willing to share that strength," she said. "If there is something you can do to help, you do it because you know that same help will be there if you're the one who needs it."

The afternoon of Legried's accident, on Aug. 15, he was driving to pick up a load of gravel to help a neighbor with a driveway project when he swerved to avoid the puppy.

He was rushed to the nearest hospital, in Blue Earth, Minn., then was sent by Life Flight to the Mayo Clinic in Rochester, Minn., where he stayed for several weeks.

"When I woke up after surgery on my left shoulder, people were already wondering how they could help," he said.

One of them was Lori Osland, whose husband, Rick Osland, grew up across the road from Legried's 1920 farmhouse.

"We knew that with both of his shoulders injured in the accident, it would be impossible for Scott to drive his tractor," she said.

Osland started making calls, and she soon had a list of 18 farmers to harvest Legried's soybean crop in early October. Other people offered to help put together a lunch of pulled pork and biscuits for the group.

"I personally know how much it meant to Scott," Osland said. "When I had cancer six years ago, I never had to cook a meal. Everyone pitched in. And that's what they wanted to do for him in the same spirit."

Frost City Clerk Cindy Klingbeil said the community support for Legried reminded her of the outpouring she received 16 years ago when her husband, Brad Quade, was killed in a farming accident.

"Everyone set aside one day and harvested all 450 of our acres," said Klingbeil, 60. "It really meant a lot."

"It's something people have done here for as long as I can remember," she added. "Last year, we had a farmer who was laid up after an accident, and everyone pitched in then, too. We only have 200 people, but everyone does their part."

'We have to look out for each other'

Tim Steier was among those who took his combine to Legried's farm to harvest a section of his soybean field. He and the other volunteers harvested 240 acres in about four hours, he said.

"There's not a lot of time to waste this time of year, because an early snowfall could take [the whole crop] down," Steier said. "There are fewer rural farmers all the time. We have to look out for each other."

Steier said people in the community also chipped in to mow Legried's lawn and feed his dogs while he was in the hospital.

"We'll be back to get the corn, and hopefully by spring, Scott will be all healed up and can do his own planting," he said.

If not, Legried said he knows he won't have to look far to find willing helpers.

"Frost really is the heartland of America," he said. "One day, I hope I'm able to pay the favor back."