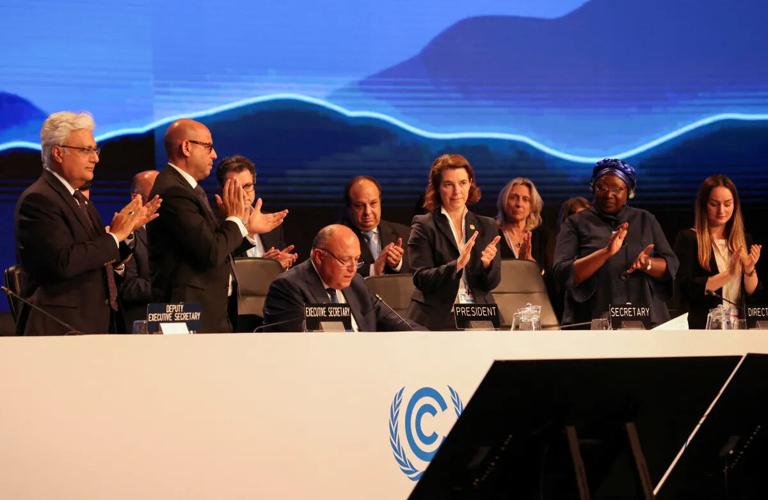 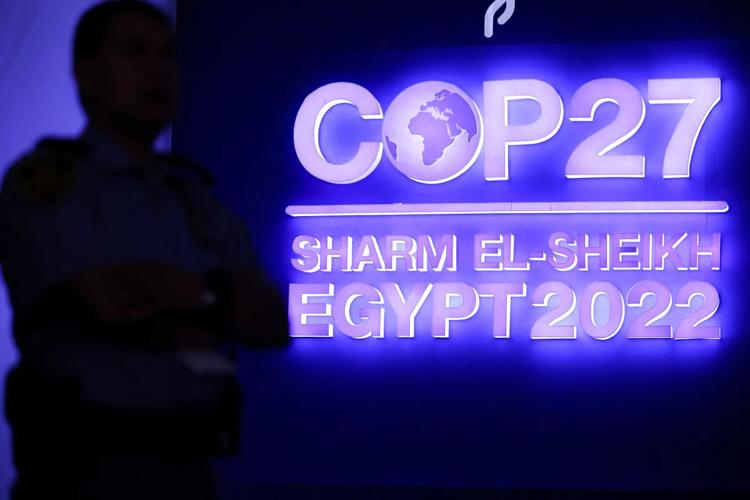 SUMMIT: A security personnel stands guard next to the COP27 sign during the closing plenary at the COP27 climate summit in the Red Sea resort of Sharm el-Sheikh, Egypt, on Sunday, Nov. 20, 2022. Mohamed Abd El Ghany/Reuters

SUMMIT: A security personnel stands guard next to the COP27 sign during the closing plenary at the COP27 climate summit in the Red Sea resort of Sharm el-Sheikh, Egypt, on Sunday, Nov. 20, 2022. Mohamed Abd El Ghany/Reuters

SHARM EL-SHEIKH, Egypt — Agreement at the COP27 climate talks to set up a "loss and damage" fund marks a milestone in the long fight to get help for poor communities on the front lines of global warming, said officials and campaigners who had pressed hard for its creation.

The two-week talks in the Egyptian resort town of Sharm el-Sheikh, hampered by global geopolitical tensions, ended early Sunday with a deal to establish a new fund to help vulnerable countries pay their rising costs of climate damage from wilder weather and rising seas.

The details on how it will operate and where it will source money will be worked out by a committee in the coming year.

A group of 134 African, Asian and Latin American states and small island nations, led by flood-battered Pakistan, presented a united front to push through the controversial fund.

He was instrumental in securing the first formal U.N. body on loss and damage at the 2013 Warsaw COP, as chief negotiator for the Philippines, after his country was slammed by Typhoon Haiyan.

"Governments have laid the cornerstone of a long-overdue new fund to deliver vital support to vulnerable countries and communities that are already being devastated by the accelerating climate crisis," he said, calling it "a victory for people power."

The Alliance of Small Island States (AOSIS) said its members in the Pacific and the Caribbean had "exhausted all of our efforts" at COP27 to land a fund they had been pursuing for 30 years, since the issue of loss and damage was first raised at the climate talks by Vanuatu.

"Today, the international community has restored global faith in this critical process that is dedicated to ensuring no one is left behind," said Antigua and Barbuda's health and environment minister Molwyn Joseph, the AOSIS chair.

"We have shown those who have felt neglected that we hear you, we see you, and we are giving you the respect and care you deserve," he said in a statement.

While the loss and damage fund would not be enough to deal with growing climate losses, "it is a much-needed political signal to rebuild broken trust" between rich and poor nations, he said in a video statement.

While climate campaigners broadly welcomed the new loss and damage fund, some were cautious, pointing out that many aspects of its governance are still to be resolved, and noting it is unclear how much money it will be able to raise and from where.

Jean Su, energy justice director at the Center for Biological Diversity, said that the United States, European governments and other industrialized countries had swung their weight behind the fund "after years of resistance."

Their opposition was rooted in fears of being held financially liable for the impacts of their historically high greenhouse gas emissions.

But that line became tougher to hold amid the "growing gravity, scope and frequency in all regions of loss and damage associated with the adverse effects of climate change," as the final "Sharm el-Sheikh Implementation Plan" noted.

Climate "loss and damage" includes not just harm to people, their homes and infrastructure from disasters such as floods, droughts and storms, but also forced displacement from slower impacts such as sea level rise, as well as losses of cultural heritage and community livelihoods, it added.

“Coming out of this summit all eyes are on the U.S. and other major polluters to pay up to the world for their monumental climate debt,” Su added.

The new fund will differ from other U.N.-backed climate funds because it will gather money from a far wider range of sources, including development banks and innovative sources of finance such as taxes on fossil fuels or airlines.

Traditional donor governments, including European Union members and the United States, insisted on this as a condition for supporting the fund.

They faced pushback from China and other emerging economies, so the thorny issue of who exactly will pay into the fund was put off to be settled later.

The United States and other nations have argued that China, as the world's biggest climate polluter since 2006, should have a role in contributing to the fund, an ask Beijing has rejected.

Political figures had urged countries at COP27 to set aside geopolitical fights in order to keep climate action on track.

"In a year of multiple crises and climate shocks, the historic outcome on loss and damage at COP27 shows international cooperation is still possible, even in these testing times," said Mary Robinson, former Irish president and chair of The Elders, a group of independent global leaders.

But, she added, "the world remains on the brink of climate catastrophe" - especially given the slow progress by governments on ramping up efforts to cut greenhouse gas emissions faster, as needed to stop global warming breaking through 1.5 degrees Celsius, the most ambitious Paris Agreement goal.

Alok Sharma, the British politician who presided over the U.N. climate summit a year ago in Glasgow, joined a chorus of criticism of the deal by anti-fossil fuel campaigners and other governments that had wanted stronger commitments at COP27 to secure the 1.5C limit, which he said "remains on life support."

He noted it had not been possible to "take definitive steps forward" to reduce emissions and move away from polluting oil and gas.

Britain had pressed, with other governments including the EU, for agreement to reach peak global emissions before 2025, to decide a clear path to phase down coal use - a goal set in Glasgow - and to phase down all fossil fuels, not just coal.

All of those things are "not in this text" from COP27, Sharma said, adding its section on energy had also been weakened at the last minute.

The Sharm el-Sheikh plan includes reference to boosting "low-emission" energy, as well as renewables, in a clear nod to COP27 host country Egypt and other producers of gas - the least-polluting fossil fuel.

The language also supports the plans of many fossil-fuel-producing countries to use fledging carbon capture technology to curb emissions rather than scaling back production.

"The only way to safely limit warming to 1.5C is to equitably phase out oil, gas, and coal. Instead, we are at risk of a major surge of new oil and gas production," he warned.

Many green groups emphasized that sluggish global action on reducing emissions will only heighten the need for funding to help people suffering from climate losses in the future.

Manuel Pulgar-Vidal, global climate and energy lead for environmental group WWF, who presided over COP20 in Peru, said leaders had missed the chance in Egypt to speed up the rapid and deep emissions cuts essential to limit climate damage.

“The loss and damage deal agreed is a positive step, but it risks becoming a ‘fund for the end of the world’ if countries don’t move faster to slash emissions and limit warming to below 1.5C," he warned.

How would you grade the term of Attorney General Leevin Camacho?

Words no parent wants to hear

Imagine this. Read moreWords no parent wants to hear