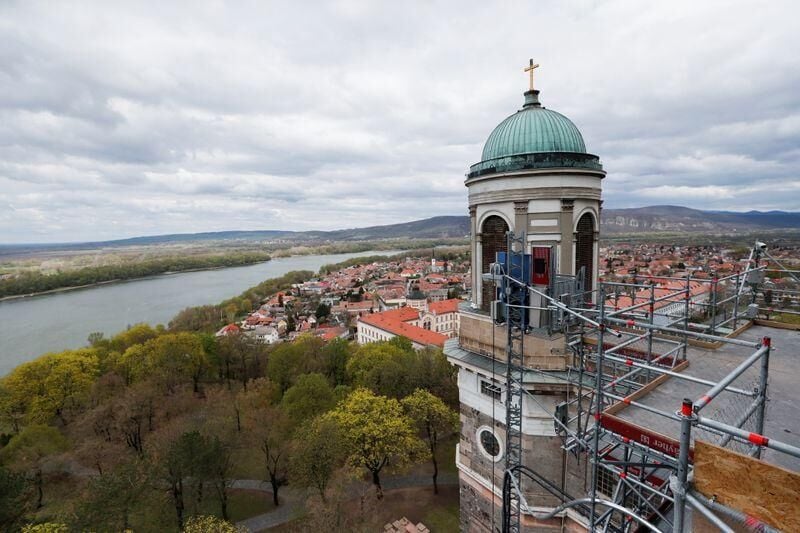 ESZTERGOM CATHEDRAL: The Esztergom Cathedral is seen during the renovation of the building in Esztergom, Hungary, on Wednesday, April 14, 2021. Picture taken April 14, 2021. Bernadett Szabo/Reuters 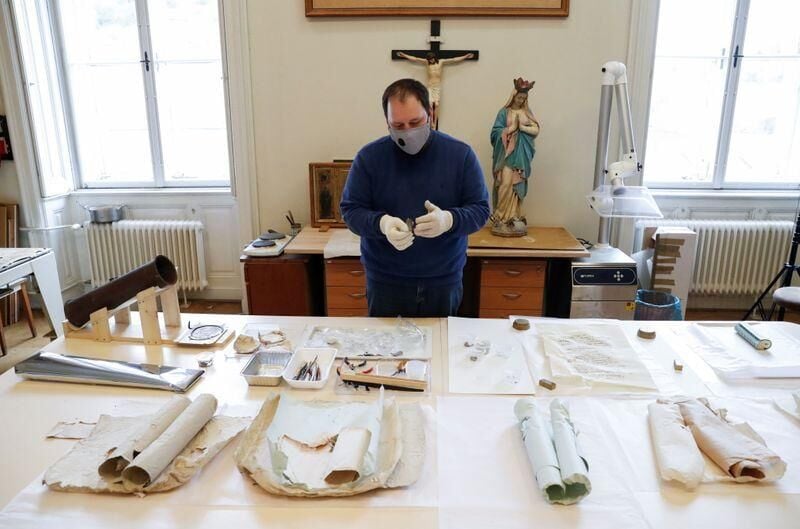 ESZTERGOM CATHEDRAL: The Esztergom Cathedral is seen during the renovation of the building in Esztergom, Hungary, on Wednesday, April 14, 2021. Picture taken April 14, 2021. Bernadett Szabo/Reuters

ESZTERGOM, Hungary — The cross on top of Hungary's largest church, the magnificent Esztergom Cathedral, has been hiding a 176-year-old time capsule that was only recovered during renovation work this year.

The sealed copper canister was inside the cross on the 100-meter dome, the highest in Hungary, which survived being bombed during World War II.

The container was also badly damaged by shrapnel but when they opened it, historians discovered documents in near-perfect condition relating to the cathedral's construction.

Csaba Torok, director of the Cathedral's Treasury, said the papers gave a rare glimpse of the time when the church was built from 1822 onward.

The cylindrical capsule was placed in the cross in 1845 by Archbishop Jozsef Kopacsy and chief architect Jozsef Hild, who took over after his predecessor was murdered.

"Archbishop Kopacsy knew he would not be able to complete the construction in his lifetime, so when the cross was finished he wanted to leave inside an imprint of the memory of the builders and of that era," Torok said.

The best moment was when they found the documents: one depicting milestones in the construction and a book containing names of clergymen and parishes.

"These were last touched by human hands when they were placed there 176 years ago, so somehow we felt a sudden connection in time," he said.

"Unfortunately, we did not find any coins from the period in the capsule so there was nothing to help pay for the renovation," he added, smiling.

The Catholic cathedral was built on Castle Hill, where a church was first founded over 1,000 years ago. Its iron dome was built in Vienna and carried in sections down the Danube on barges.

For its consecration in 1856, Hungarian composer and pianist Franz Liszt composed a Mass. But the cathedral was still not finished, with the main portico and interior only completed later in the 19th century.

A new time capsule might be placed in the cross for future generations. But its copper cover will be sealed on June 30, so they will have to move quickly, Torok said.

The best moment was when they found the documents: one depicting milestones in the construction and a book containing names of clergymen and parishes.

As graduates march into the world, hopefully they can help it recover from COVID-19

Congratulations to the thousands of young Guamanians graduating this month and next from high school and higher education. Read more

To his amazement, Mr. Eric Chong discovered that his students at Simon Sanchez High School had not heard about learning loss. He sprang into a… Read more