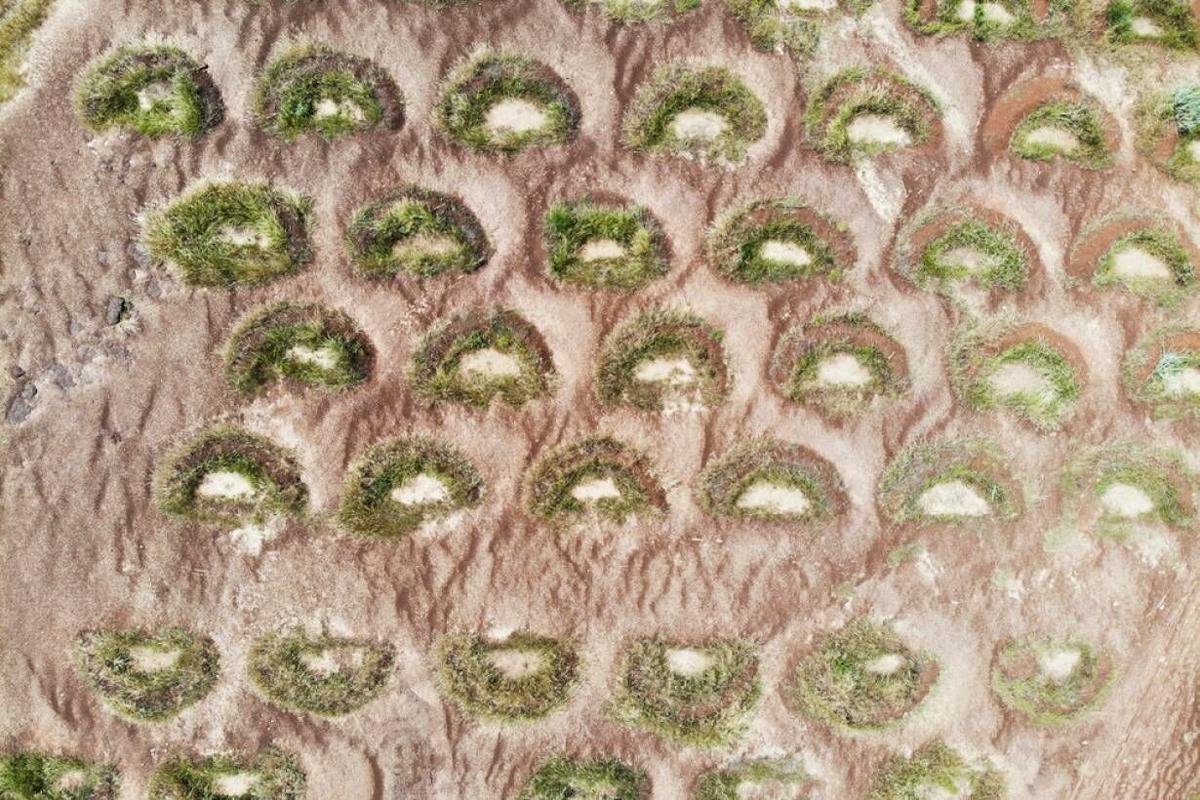 SIMPLE SYSTEM: Aerial shot of half moons, a simple system to conserve soil and water, in the Zinder region in Niger. Barbara Gravelli/Handout via IFAD/FAO/WFP 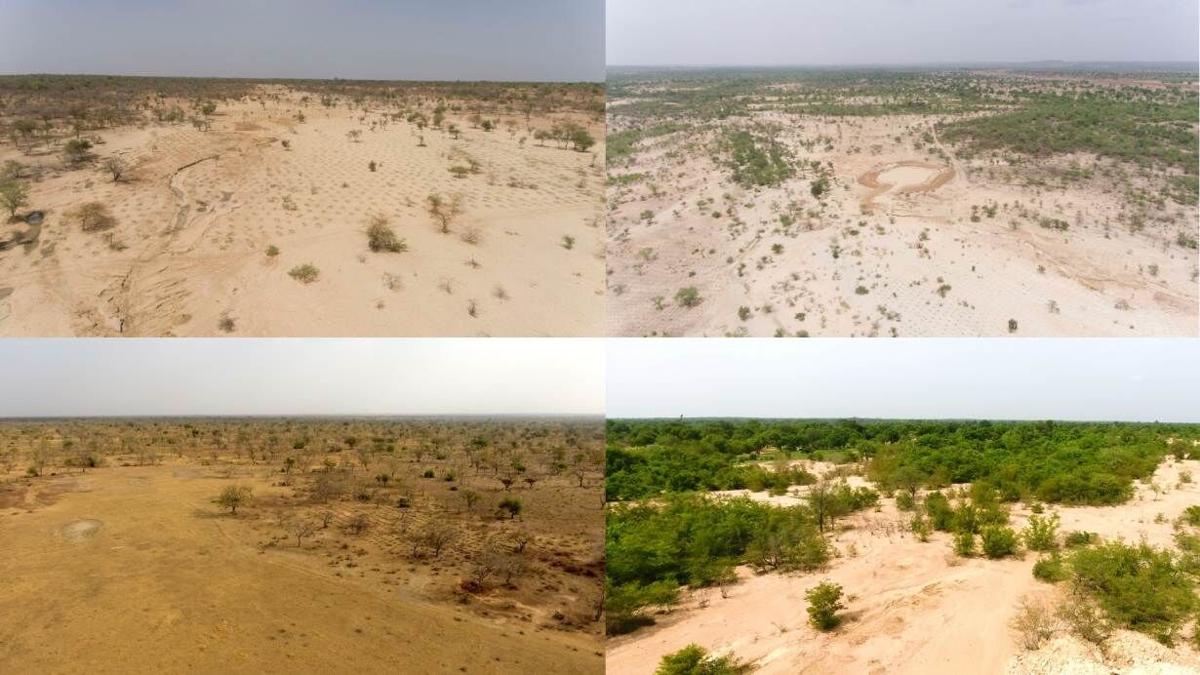 BEFORE AND AFTER: This composite image shows, top left and right, an area in Burkina Faso before and after land restoration work, including the creation of water conservation pits. Bottom left and right shows an area in La Toden commune, about 135 kilometers north west of Burkina Faso's capital Ouagadougou, before and after soil and water conservation work. Thomson Reuters Foundation using handout photos from Tree Aid 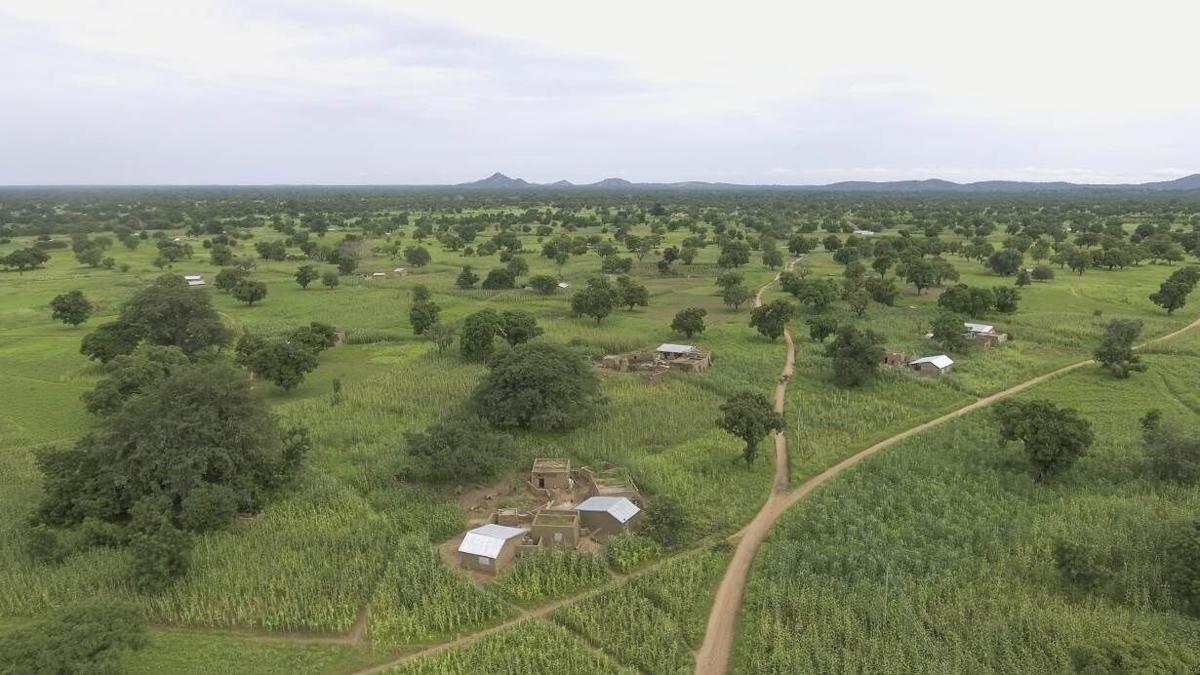 GREENING GHANA: This drone-shot image shows a community in Ghana that Tree Aid has been helping for nearly a decade. Tree Aid

SIMPLE SYSTEM: Aerial shot of half moons, a simple system to conserve soil and water, in the Zinder region in Niger. Barbara Gravelli/Handout via IFAD/FAO/WFP

BEFORE AND AFTER: This composite image shows, top left and right, an area in Burkina Faso before and after land restoration work, including the creation of water conservation pits. Bottom left and right shows an area in La Toden commune, about 135 kilometers north west of Burkina Faso's capital Ouagadougou, before and after soil and water conservation work. Thomson Reuters Foundation using handout photos from Tree Aid

GREENING GHANA: This drone-shot image shows a community in Ghana that Tree Aid has been helping for nearly a decade. Tree Aid

ROME — Growing up in a village in Burkina Faso, Georges Bazongo remembers his parents and neighbors cutting down trees each year to expand their farmland so they could "grow enough food for our families to eat."

He also noticed some trees becoming drier in the drought-prone region, an indication too that the soil was deteriorating as heavy rains washed away its fertile layer.

Some of his relatives moved to Ivory Coast in search of a better life, Bazongo, 48, told the Thomson Reuters Foundation.

But things started improving a decade ago when the government and environmental groups helped villagers understand the causes and risks of their degraded land, said Bazongo, director of operations at international charity Tree Aid.

About a quarter of the Earth's land area is in a bad condition due to natural processes such as erosion and human practices like deforestation and overgrazing, scientists say.

Degraded land is less productive, and releases climate-warming carbon dioxide and nitrous oxide from the soil.

At Bazongo's village, more than 160 kilometers (99.4 miles) from the capital Ouagadougou, local people have identified forest areas where tree-cutting is forbidden, developed soil and water conservation methods, and diversified crops, he said.

Now, even though his family there has swelled from 16 members to 36 and climate shocks continue, they get enough food from agriculture, livestock and forest produce – and no longer need to expand their farmland, he added.

The village is part of the Great Green Wall initiative, a regional program that aims to rein in climate change impacts, cut hunger, create jobs and reduce conflict by restoring land across the width of Africa in a belt below the Sahara desert.

"But what about the other millions of families living in poverty? That means they still continue to expand (farm) land, cut trees, and destroy plant and animal habitats because they can't see any alternatives," he said.

Getting funding to change that behavior has been a challenge, he noted, adding he was "very happy" to hear France's announcement on Monday that development banks and governments had pledged $14.3 billion to speed up Great Green Wall work.

At the One Planet Summit in Paris, French President Emmanuel Macron hailed donors for beating an initial $10-billion target and said France would ensure commitments were upheld.

"We are now standing shoulder to shoulder with ... the entire African continent," he said.

Niger-born Salima Mahamoudou, a research associate with the U.S.-based World Resources Institute who has seen firsthand the benefits of land restoration in the Sahel, said the promised funding must be turned into "concrete actions on the ground."

To do that, donor governments should help strengthen local leaders and entrepreneurs' capacity to use the money well and bring about change at the community level, she said.

The initial idea for the Great Green Wall, launched in 2007, was to plant an 8,000-km band of trees spanning 11 key nations from Senegal in the west to Djibouti in the east.

Its aim was to halt the march of desertification in a region already hit by rising temperatures, flooding and conflict.

After early criticism of aspects such as its narrow focus on reforestation, the scheme widened to include other approaches, like creating multi-purpose gardens and stabilizing sand dunes to support vegetation, and also expanded to 20 countries.

This week's new funding is a much-needed shot in the arm for the initiative, which aims to restore 100 million hectares (247 million acres) of degraded land, sequester 250 million tons of carbon and create 10 million green jobs by 2030.

The Great Green Wall has so far covered only 4% of its target area – 4 million hectares – despite being more than halfway toward its final deadline.

A U.N. status report last year said restoration work needed to speed up to cover 8 million hectares a year, at an annual cost of $3.6 billion to $4.3 billion.

Projects had not been well-monitored nor integrated with national environmental priorities, it added.

"I want to be crystal clear: All those issues will be addressed," Gilbert Houngbo, president of the Rome-based International Fund for Agricultural Development, told the Thomson Reuters Foundation in an interview.

On Monday, the U.N. agency launched a new investment program with the Green Climate Fund to accelerate the Great Green Wall's completion, with projects to help small-scale farmers and agribusinesses, and create jobs.

The projects will include installing irrigation, developing climate-resilient infrastructure – such as roads and crop processing or storage facilities that are protected from floods – and expanding solar energy.

More than one in five sub-Saharan Africans went hungry last year, and with the Sahel's population predicted to double by 2050, millions of rural youth facing falling agricultural yields could fuel migration and conflict, IFAD warned in a statement.

Lars Laestadius of the Global EverGreening Alliance, a coalition of aid and environmental groups working on land restoration, said the Great Green Wall must focus on boosting the prosperity of very poor people where every tree counts for someone's livelihood.

There are questions over what type of restoration will be prioritized, he noted – using costly tractors to dig into arid soil to plant new trees, or protecting young shoots that sprout from trees that have been cut down and then left to regenerate.

"This is very cheap and there are cases of that in Niger," he said. "You can cover very big areas at very low cost."

More diversified financing, including from private sources such as impact investors, will be needed for land restoration to become a business carried out by local companies – something that is starting to happen, said WRI's Mahamoudou.

Louise Baker, head of the operational arm of the United Nations Convention to Combat Desertification, said ministers outside of the environment had yet to take the Great Green Wall as seriously as they should, but COVID-19 recovery plans offered an opportunity to change that.

"You can argue that our relationship with nature got us in this mess in the first place – so putting nature at the heart of (recovery) really solves multiple problems," she said.

In places like the Sahel, where 70-80% of people are farmers, supporting local agricultural value chains can reduce dependence on both imported goods and humanitarian aid by making incomes more secure, she added.

"We can invest this (money) better ... and give people some different choices and different opportunities if we do something like the Great Green Wall," she said.