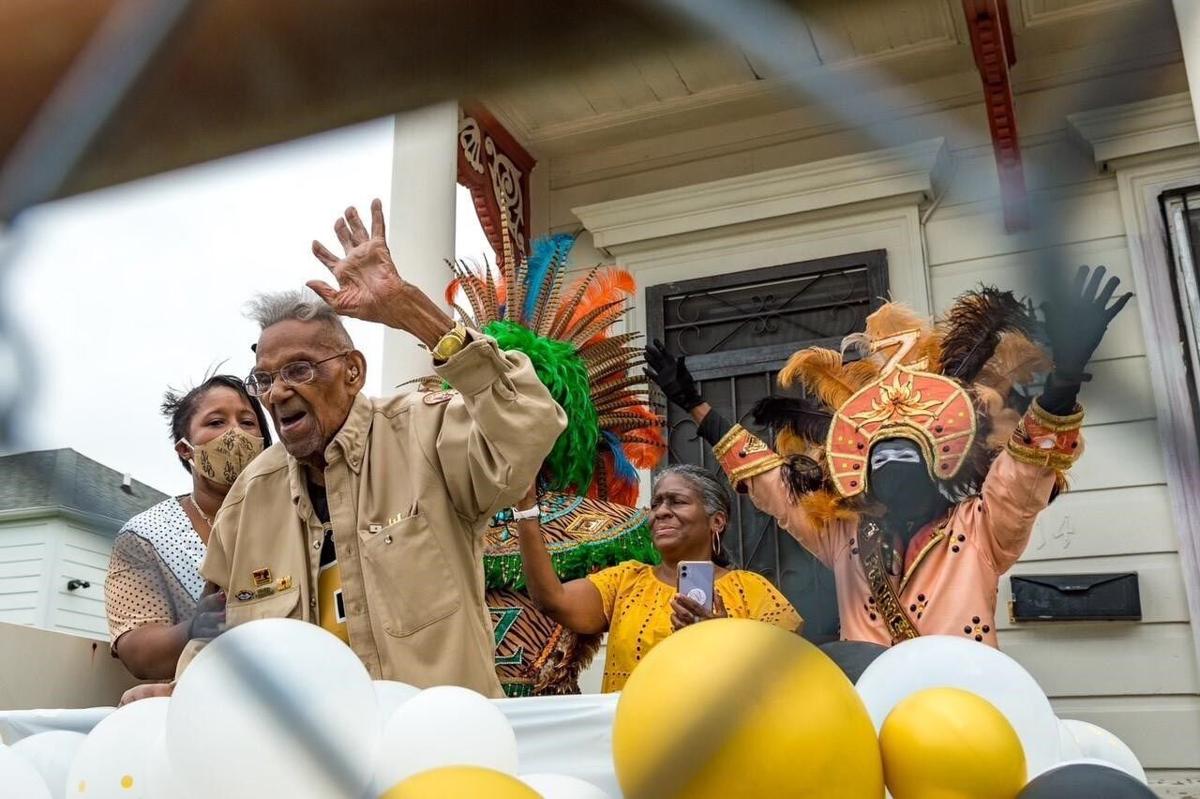 'A WONDERFUL HUMAN BEING': Lawrence Brooks, the oldest World War II veteran in the United States, celebrates his 112th birthday on Sunday, Sept. 12, 2021. The National WWII Museum arranged a party in front of his New Orleans home. Photo courtesy of the National World War II Museum/Via The Washington Post 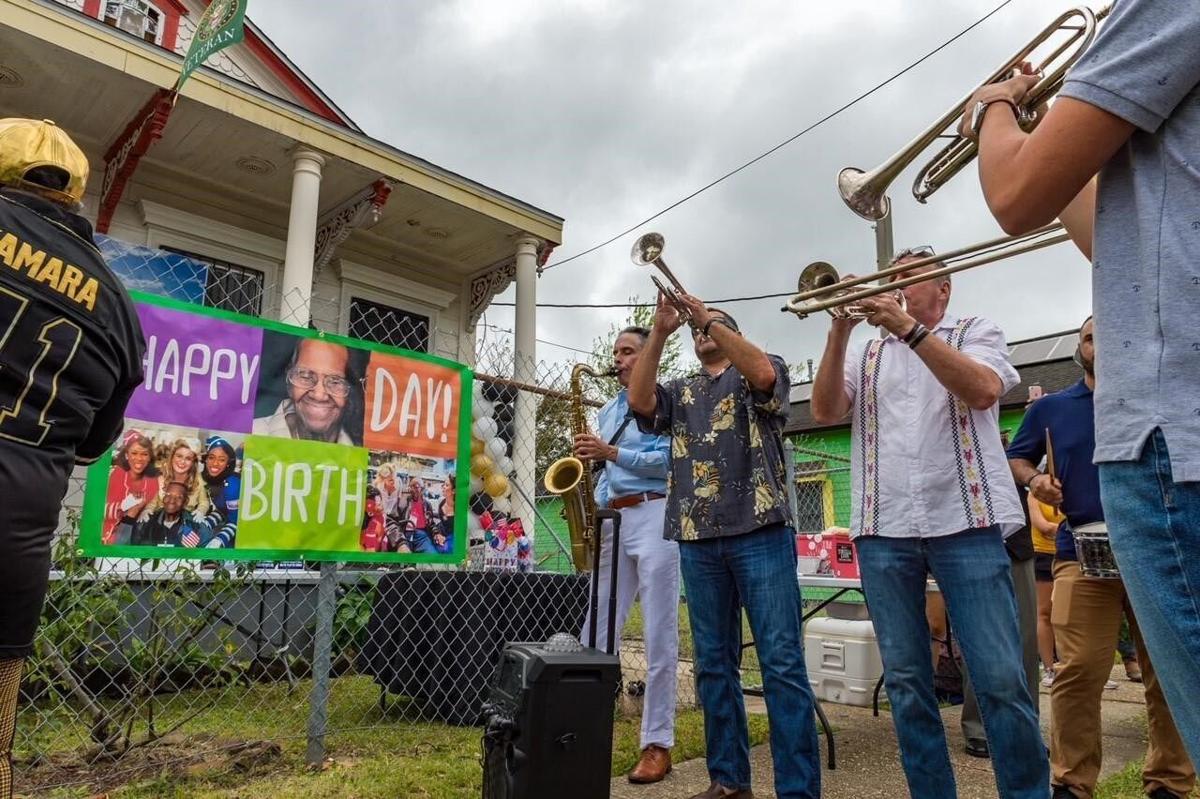 'A WONDERFUL HUMAN BEING': Lawrence Brooks, the oldest World War II veteran in the United States, celebrates his 112th birthday on Sunday, Sept. 12, 2021. The National WWII Museum arranged a party in front of his New Orleans home. Photo courtesy of the National World War II Museum/Via The Washington Post

Every birthday is a milestone after 100 – especially for the oldest World War II veteran in the United States.

Lawrence Brooks turned 112 on Sept. 12 with a boisterous party outside his New Orleans home, including a vehicle parade, two brass bands and, of course, his favorite chocolate cake.

At one point during the hour-long celebration, Brooks confidently rose from his wheelchair. He danced, he smiled and he waved.

This is his third year as a supercentenarian – meaning age 110 and older.

"We like to tell him, 'Mr. Brooks, as long as you keep having birthdays, we're going to keep throwing your birthday party,'" said Peter Crean, a vice president at the National WWII Museum in New Orleans.

The event was orchestrated by the museum, which has thrown Brooks a birthday celebration for the past eight years.

"He is a fixture here at the museum, but also in the community," Crean said. "He is a wonderful human being who is inspiring to everyone he meets."

Brooks, born in Norwood, La., in 1909, was one of 15 children. He was drafted in 1940 and served until 1945 as a private in the predominantly Black 91st Engineer Battalion, which was stationed in New Guinea and the Philippines.

"We was building roads, bridges and airstrips for planes to land," Brooks recalled in a 2018 video.

After the war, Brooks – who was unable to participate in an interview with The Washington Post because of recent health challenges – worked as a forklift operator until retiring in his 70s.

Brooks is the beloved patriarch of his family: He has five children, 13 grandchildren and 22 great-grandchildren. His wife, Leona B. Brooks, died in 2008.

The National World War II Museum first connected with Brooks in 2013, after a volunteer introduced him to staff.

"He was coming up on his 105th birthday. It was pretty remarkable, and we thought we should have some sort of celebration," Crean said.

"Mr. Brooks represents a generation that saved the world that we know. He was one of 16 million Americans who did his part for his country and the world to make it a better place," Crean said. "He is important to this museum, this city, and he is also important to our country."

So staff began organizing yearly birthday parties for Brooks, all of which – aside from the past two – were at the museum. Each year, the museum hosts a special ceremony honoring Brooks, followed by several musical performances and sweet treats.

Last year, the pandemic forced the museum to put Brooks' traditional birthday festivities on pause, but it refused to cancel the event entirely.

Instead, it brought the party to his doorstep and organized a drive-by parade outside his home, where he lives with his daughter. The museum also campaigned to collect birthday cards, and more than 21,000 notes poured in from around the world.

In the aftermath of Hurricane Ida, and amid the ongoing pandemic, the museum mobilized to throw Brooks another socially distanced, outdoor birthday party to mark his 112th.

This year's celebration was the first time Brooks had used a wheelchair. Every other year he walked with a cane.

"He's beginning to slow down," Crean said, adding that Brooks stayed in a Veterans Affairs hospital during the hurricane to ensure he would have proper electricity and air conditioning. Still, "he is in remarkably good shape for 112. He is vibrant."

The party featured musical performances from the museum's vocal trio, the Victory Belles, as well as several other local musicians. Neighbors, community members and fellow veterans danced on their front porches and on Brooks' lawn, as dozens of cars lined up with decorated signs that read: "Happy birthday Mr. Brooks."

In honor of Brooks' birthday, Louisiana Gov. John Bel Edwards tweeted: "Happy 112th birthday to Mr. Lawrence Brooks, America's oldest living World War II veteran and a proud Louisianan," along with a photo of them together.

Brooks is recognized by his community not just for his military service, but also for his kindness.

"My mother and father always raised me to love people, and I don't care what kind of people they are," Brooks said in a 2020 interview with National Geographic.

According to Crean, the supercentenarian says the secret to his long life is simple: "Be nice to people."