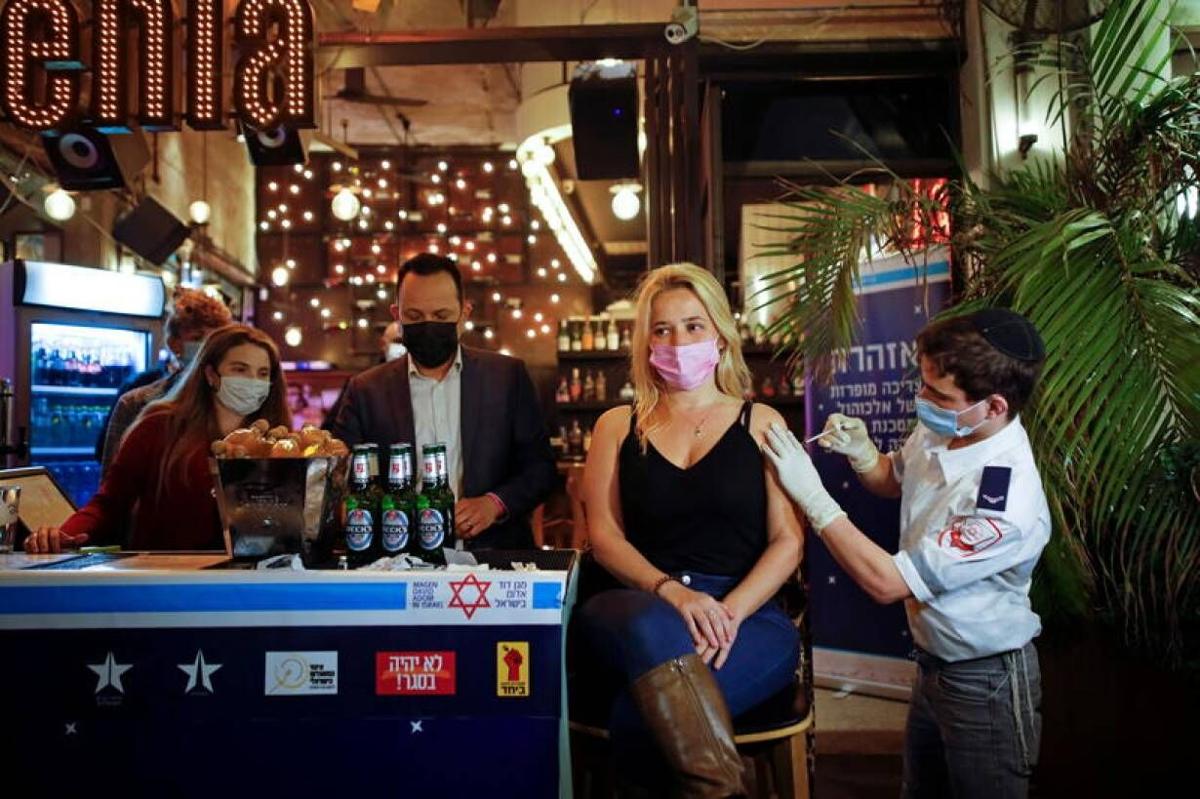 ISRAEL: A woman receives a vaccination against COVID-19 as part of a Tel Aviv municipality initiative offering a free drink at a bar to residents getting the shot, in Tel Aviv, Israel, on Feb. 18. Corinna Kern/Reuters 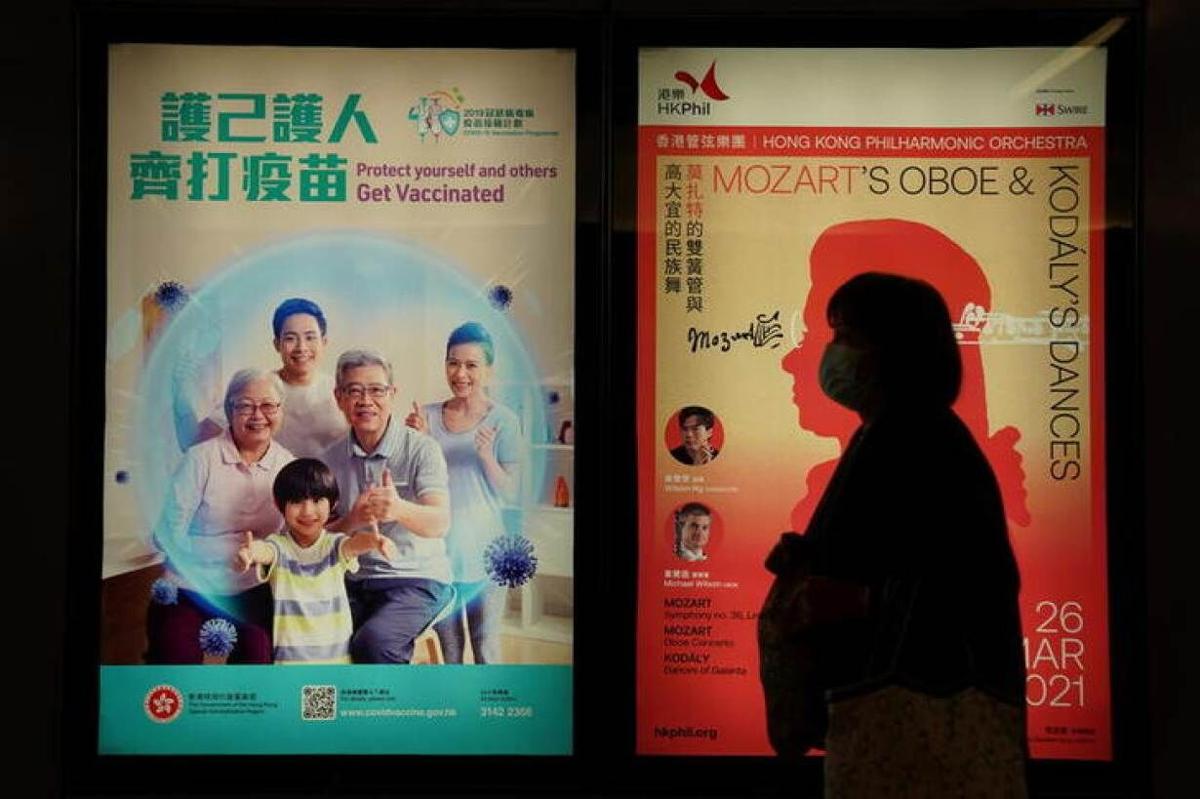 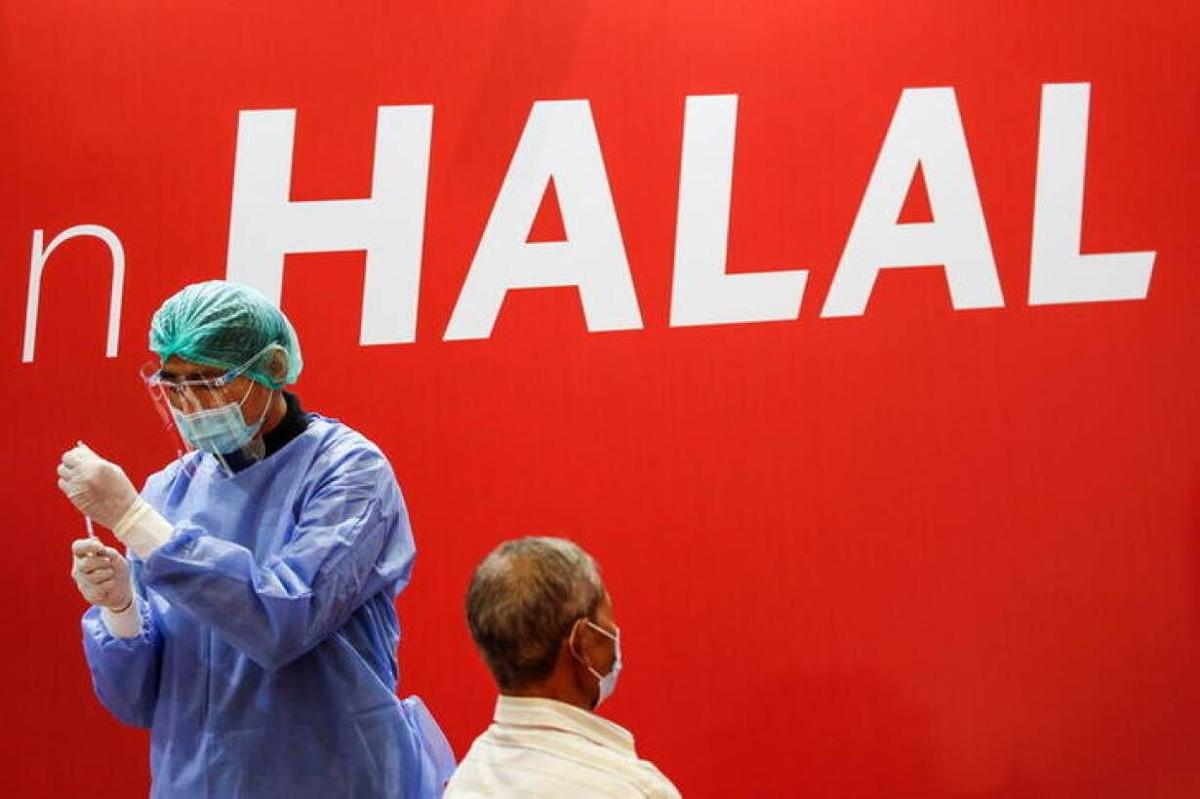 INDONESIA: A health care worker prepares to inoculate a man with Sinovac's CoronaVac COVID-19 vaccine during a mass vaccination program at the Indonesia Stock Exchange in Jakarta on March 31. Willy Kurniawan/Reuters

ISRAEL: A woman receives a vaccination against COVID-19 as part of a Tel Aviv municipality initiative offering a free drink at a bar to residents getting the shot, in Tel Aviv, Israel, on Feb. 18. Corinna Kern/Reuters

INDONESIA: A health care worker prepares to inoculate a man with Sinovac's CoronaVac COVID-19 vaccine during a mass vaccination program at the Indonesia Stock Exchange in Jakarta on March 31. Willy Kurniawan/Reuters

From dollars to cows, donuts and even drugs, a dizzying array of incentives are being offered by authorities and companies around the world in a bid to win around the vaccine hesitant as they seek to turn a page on the pandemic.

But as countries strive to reach "herd immunity" – where enough people are protected against a disease that it becomes difficult for infections to spread – others are opting to slap fines and other penalties on anyone who refuses the jab.

As mass vaccination drives progress around the world, which approach is proving more effective?

Why are incentives necessary?

Researchers developed highly effective vaccines against COVID-19 in record time, but many people are reluctant to take them, often because they worry about the safety of the vaccines or fear rare but serious side-effects.

That has prompted officials to look for ways to convince them otherwise.

In some cases that might involve allaying health fears and tackling "fake news" with information campaigns, or making sure vaccines are easy to access. But officials are also using perks – and occasionally punishments – to persuade people to go ahead.

What kind of perks are on offer?

Some U.S. states including California are holding lotteries for vaccinated residents with large cash prizes on offer, with Cambodia launching a similar incentive.

In a Philippine town, the mayor is planning a cow raffle as an incentive, while Mexican vaccination centers are laying on entertainment in the hope of making it fun to get a jab.

Businesses are also getting in on the act, from free beer in Israel to complimentary dessert in Malaysia. In Hong Kong, a property developer is raffling off a $1.4 million apartment for people who have been vaccinated.

And Washington State has allowed retailers to offer a free marijuana joint when they get a shot in "joints for jabs" promotions.

Many companies say they want to support the vaccine drive out of concern for their home communities. Offering deals and freebies can also be a financial boost for firms that might hope customers linger and buy more.

Some companies are hoping to persuade employees to get their jabs by offering cash bonuses.

What about the punishments?

Deterrents seem to be rarer, but they are also being used.

The Indonesian capital Jakarta introduced fines of up to 5 million rupiah ($350) for people who shun vaccination.

Officials in the University town Saifai in India's Uttar Pradesh have instructed liquor sellers not to serve anyone without a vaccine – though no official order has been issued.

In some countries, people who are not vaccinated will have their access to events or public spaces limited.

The United Arab Emirates, for example, will bar them from live events including sports, cultural and arts activities, while Kazakhstan is restricting access to public spaces such as bars, cinemas and airports on the basis of vaccination and infection risk.

Some companies, such as Britain's Pimlico Plumbers, are demanding jabs for jobs, saying they will only hire new workers who have had the vaccine.

Which is more effective – rewards or deterrents?

Popular psychology suggests rewards are more effective than punishment, but research on vaccine hesitancy indicates that both can be effective in certain contexts.

Mandates and sanctions for non-vaccination were effective in increasing uptake, according to a review of studies carried out by the World Health Organization in 2014, with cash incentive schemes seen as likely to be less successful.

About a third of unvaccinated Americans said they would be more likely to get the coronavirus shot in return for $100, found a survey by the University of California, Los Angeles, though some 20% said a cash reward would put them off.

And what are the medical ethics of these schemes?

Incentives are an ethical way forward while deterrents and punishments should be wielded with great care, said Nancy Kass, deputy director for public health at the John Hopkins University's Berman Institute of Bioethics in the United States.

"It's always better ethically to at least start by providing information, encouraging people, making it easy for people and doing all of those kinds of things before moving to a mandate," she told the Thomson Reuters Foundation by phone.

Relatively few people are "deeply philosophically opposed" to getting a shot, which means inducements and nudges might be enough to reach the numbers needed, she said.

And there is a significant moral difference between restrictions that push people to weigh up their options as compared to heavy fines that leave them with little real choice, Kass said.

"My fear is people jumping to (compulsory orders) as a first strategy rather than a last-mile strategy," she said.

From dollars to cows, donuts and even drugs, a dizzying array of incentives are being offered by authorities and companies around the world.