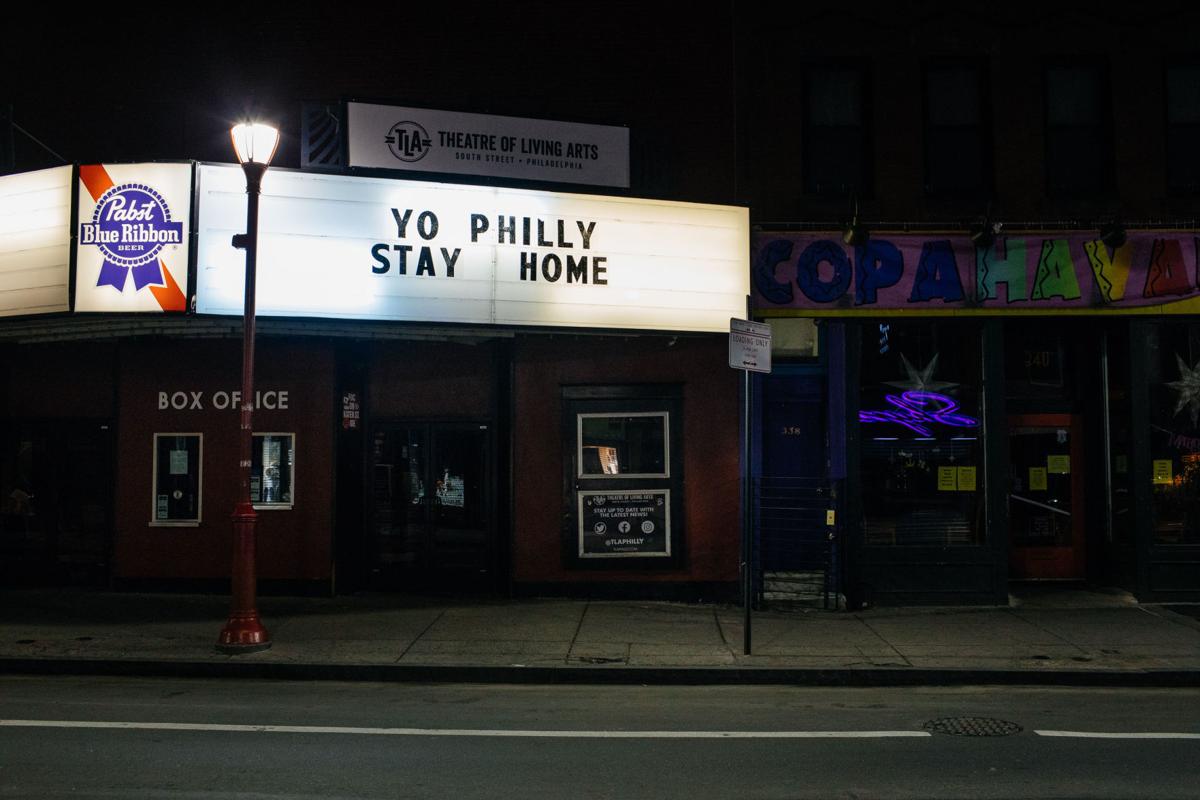 'YO PHILLY STAY HOME': The marquee at the Theatre of the Living Arts on South Street in Philadelphia. Michelle Gustafson/For The Washington Post 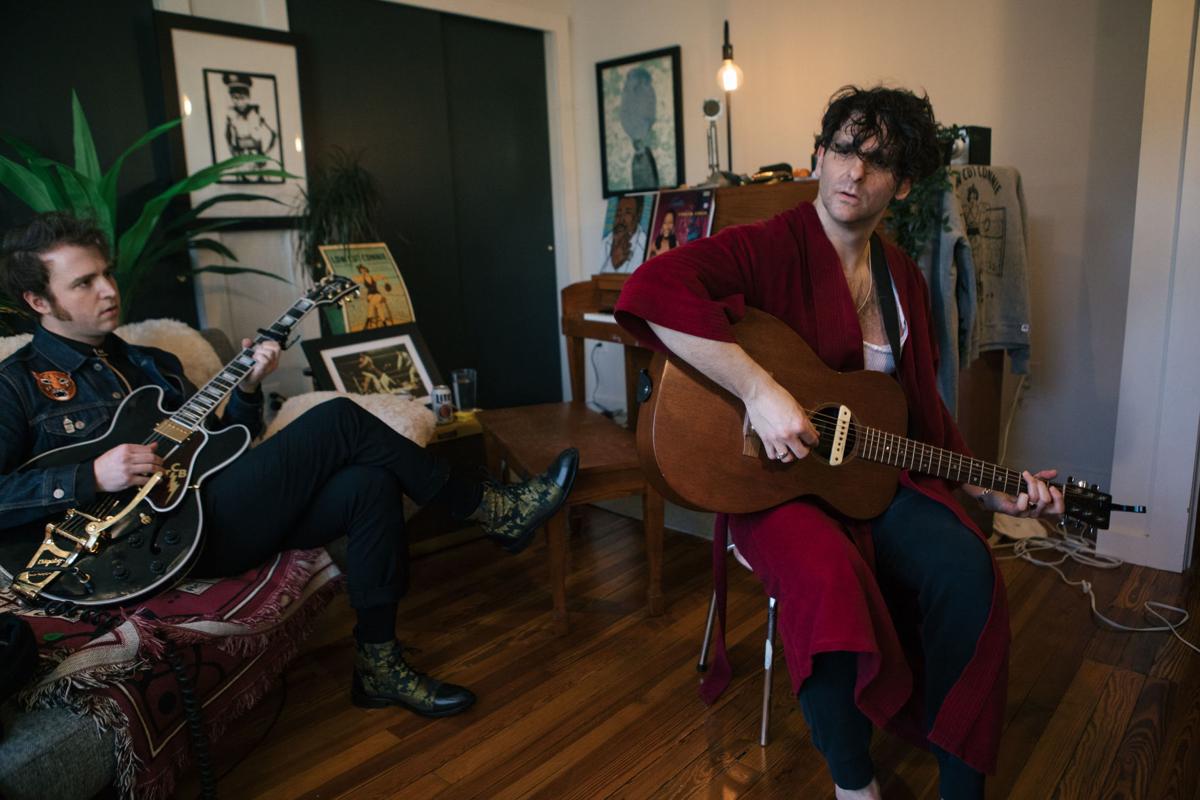 'THE CITY IS A REFUGE': Guitarist Will Donnelly and lead singer Adam Weiner of the band Low Cut Connie perform a virtual, streamed concert from Weiner's South Philadelphia home on Saturday. Michelle Gustafson/For The Washington Post 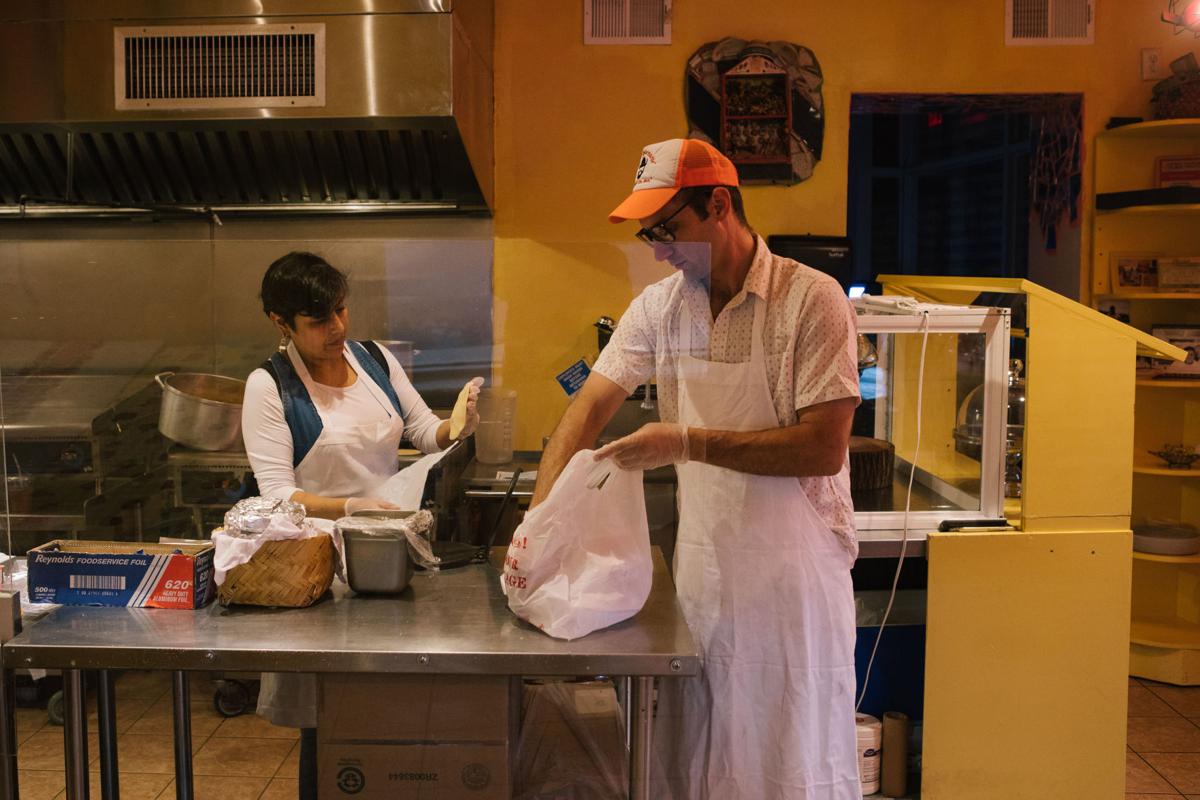 LOOKING OUT FOR THE COMMUNITY: Cristina Martinez and her husband, Ben Miller, put together orders at South Philly Barbacoa on Friday. Michelle Gustafson/For The Washington Post 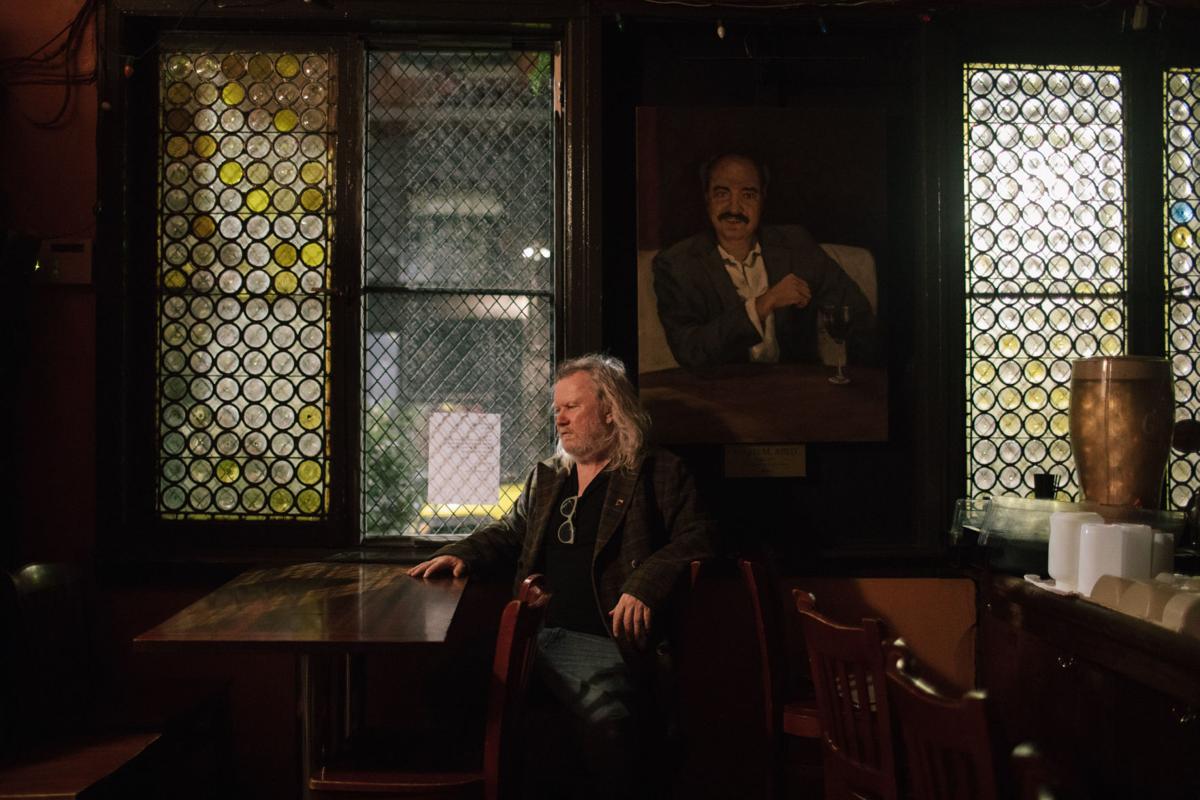 'THERE'S NOWHERE TO REVEL': Fergie Carey, Philadelphia's unofficial "Night Mayor," sits at Fergie's Pub on Friday night. Philadelphia's normally bustling nightlife has come to a halt due to concerns over COVID-19, as bars and restaurants across the country have shut down indefinitely. Michelle Gustafson/For The Washington Post

'YO PHILLY STAY HOME': The marquee at the Theatre of the Living Arts on South Street in Philadelphia. Michelle Gustafson/For The Washington Post

'THE CITY IS A REFUGE': Guitarist Will Donnelly and lead singer Adam Weiner of the band Low Cut Connie perform a virtual, streamed concert from Weiner's South Philadelphia home on Saturday. Michelle Gustafson/For The Washington Post

LOOKING OUT FOR THE COMMUNITY: Cristina Martinez and her husband, Ben Miller, put together orders at South Philly Barbacoa on Friday. Michelle Gustafson/For The Washington Post

'THERE'S NOWHERE TO REVEL': Fergie Carey, Philadelphia's unofficial "Night Mayor," sits at Fergie's Pub on Friday night. Philadelphia's normally bustling nightlife has come to a halt due to concerns over COVID-19, as bars and restaurants across the country have shut down indefinitely. Michelle Gustafson/For The Washington Post

PHILADELPHIA – The great orchestra, with its lush string section, would have played Beethoven. The Sixers would have hosted Atlanta. The art museum would have held its weekly house party. Dozens of musical acts, including Thundercat, Tower of Power and Rodney Crowell, would have performed in beer-soaked venues. In the first weekend of spring, the restaurants, bars and clubs would have been swarmed.

Not now. During the COVID-19 pandemic, nightlife has been indefinitely canceled; the city's brash, intoxicating evening soundtrack hushed.

Philadelphia's most trampled streets are stripped of patrons. You can park almost anywhere on Walnut Street, the social artery of Center City, and pull U-turns on Frankford Avenue, Fishtown's millennial playground. On South Street, the Theatre of the Living Arts concert marquee declares, "Yo Philly Stay Home."

Chinatown has plunged into darkness, as though felled by a blackout. The Kimmel Center, the Wells Fargo Center and the Met remain illuminated like massive mausoleums. Lights on, nobody home.

This is what happens in a great American city, celebrated for its rich, diverse nightlife when restaurants and arts institutions shutter, seasons are scrapped or postponed in a sports mecca and residents are instructed to stay put.

"People have their day self and their night self," says Adam Weiner, 40, of the band Low Cut Connie. "The city is a refuge for people who want a new life. Maybe they don't fit in. They create a new family for themselves, a chosen family or an alter ego."

In the past three decades, this city of almost 1.6 million has been transformed, especially at night, celebrated for things it had never been known for before.

Philadelphia became a great food city, a lauded beer capital, a haven for musicians, artists and creators, welcoming young people who had been priced out of Brooklyn and elsewhere, seduced by lower rents and a population ravenous for innovation, altering Fishtown and broad tracts of South and West Philadelphia.

Before then, large swaths of the city died by 9 p.m., no different from the surrounding suburbs or areas farther afield. New residents flocked here, to take advantage of what a major metropolis offers: more.

Now, the nights have flatlined. On many streets, there are more cops and security guards than residents they're hired to protect. On Friday night, Rittenhouse Square, the city's verdant jewel, its communal patio, is deserted except for a cluster of 20-somethings, sharing joints. Sought-after bistro chairs and tables on its eastern border remain outside unused.

Sidewalks are empty except for runners, dog owners out walking and customers awaiting takeout, all quotidian activities that make the night no different from the day.

A nighttime buffet of choices

Our nights present a delectable buffet of choices, in the post-work hours when most of us are liberated from tasks, free to select how we play, where we gather, how we enhance our lives.

"You can't be yourself on the job. The night is when you can go out and let your hair down, and be yourself and be your people," says Gillian Chadwick, 41, a musician and jewelry designer whose nighttime living room is Johnny Brenda's, a beloved bar and music venue on Fishtown's central corner of Frankford and Girard. Johnny Brenda's is strenuously divey, which in Philadelphia is high praise.

"The nights are how we define ourselves, and how we find our tribe," says Jim Minacci, 58, who stocks shelves at Walmart and serves as a sexton at colonial Gloria Dei Old Swedes' Church in South Philadelphia with his wife, Paula, the artistic director of Anna Maria's Academy of Dance in the Northeast. Their nights are fueled by rock concerts. "It's a way to weave yourself in and out of this life."

Magnolias are fat with blooms. Spring's cultural life is frozen.

"It's like weird, eerie and peaceful," says singer and songwriter Fawziyya Heart, 31, of North Philadelphia, who hosts a monthly Fishtown house party, and is a member of the eight-piece Worldtown Soundsystem, which usually plays the festival circuit.

In two weeks, the city would have embraced the Phillies' return from Clearwater, Florida. Now, the Major League Baseball season has been indefinitely suspended and the parking lot has become a coronavirus testing site.

Last call for the city

On Saturday, Mayor Jim Kenney encouraged Philadelphians "to go out and have dinner." During the final pre-quarantine hurrah, some revelers got sloppy and stupid. A fight broke out at the International Bar, one of three restaurants co-owned by William Reed. The fight was about the coronavirus, a cough and keeping your distance.

"We had to kick people out," says Reed, who also co-owns Johnny Brenda's. "The fabric was really starting to fray with a lot of people."

The next day, Kenney ordered bars and restaurants to shutter by 5 p.m. on Monday. In the coming nights, they could open only for takeout orders by phone or email. Democratic Gov. Tom Wolf of Pennsylvania, home to some of the nation's most antediluvian alcohol laws, ordered all state liquor stores to cease operation Tuesday night. Their stripped shelves resembled Russian stores during glasnost. Philadelphians would need to imbibe in place.

Every night has seemed a month. Steve Cook, 46, co-owns 16 acclaimed restaurants with James Beard-winning chef Michael Solomonov, including Zahav and Federal Donuts. Two weeks ago, their latest project, Laser Wolf in Fishtown, had its best week ever.

"Saturday night was normal," Cook says. "Sunday, it fell off a cliff."

St. Patrick's Day and the Saturday before are Christmas for the city's Irish pubs. "Our best nights of the year," says Dublin-born Fergie Carey, 56, Philadelphia's "Night Mayor," co-owner of an eponymous pub and two other establishments. Public celebration on St. Patrick's Day was outlawed.

"There are no revelers," Carey says. "There's nowhere to revel."

'My tribe is unconnected'

We go out at night to feel part of something bigger, to feel like a better, livelier version of ourselves for being in the room. Now, restaurants offering takeout are stark reminders of contagion and risk. They're open but patrons cannot enter. The street view is of well-lit spaces occupied by a few lone cooks in face masks, a pandemic take on Edward Hopper.

Cristina Martinez and Ben Miller own South Philly Barbacoa in the Italian Market neighborhood. The multiple-time James Beard-finalist is known for long lines that usually spool on weekend days. Now, the couple is keeping the lights on, the stove lit at night, to feed regulars, especially hospital workers. Patrons can pay what they want.

"The main issue is to get the community through the crisis," says Martinez, 48.

Six months ago, lawyer Shelley Green, 69, moved into Center City from the Main Line so she could be within walking distance of Philadelphia's cultural venues, her calendar flush with commitments.

"I rely on the arts for every dimension, to make me happy, to make me sad, to be attuned to more of what's going on in the world, or escape from the world, for something beautiful or something challenging," Green says. Normally, she's out five nights weekly, attending theater, dance, opera and art events. "It's a way to see people, to learn about people that I may not encounter in my personal life."

Now, all is on hold.

"I have a phantom calendar. Everything is crossed out," Green says.

The Philadelphia Orchestra last performed two weeks ago, to an empty 2,500-seat hall, for a radio broadcast. It's distance entertainment.

"Maybe we took for granted how important nightlife is for us," says Stacey "Flygirrl" Wilson, 43, an artist and events promoter. For 13 years, she co-produced a weekly dance party with Questlove. "Nightlife is an outlet, to let loose, to forget about your worries, and forget about the day."

Minacci, the sexton and Walmart worker, lives for his nights, his therapy.

"My tribe is unconnected. Everything's on hold," while his two jobs continue unabated, he says. "After you had to work, you had this release of sheer enjoyment. I'm at a loss."