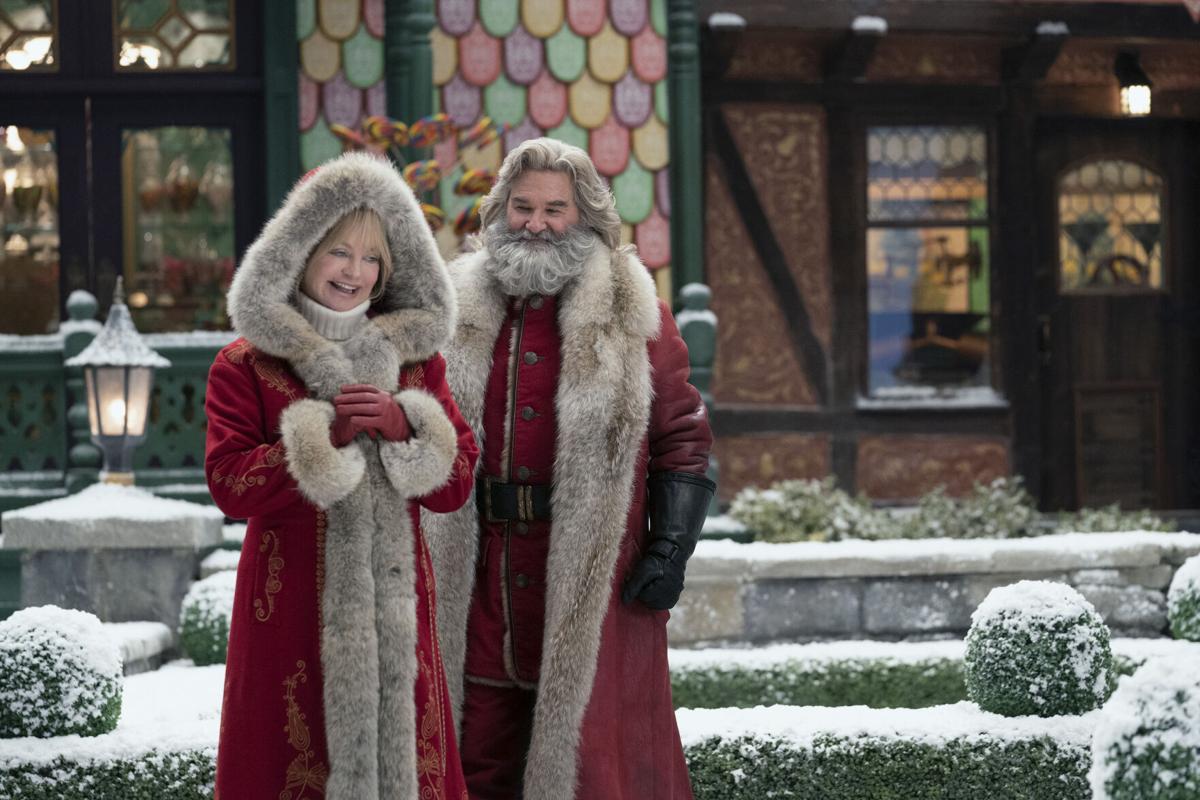 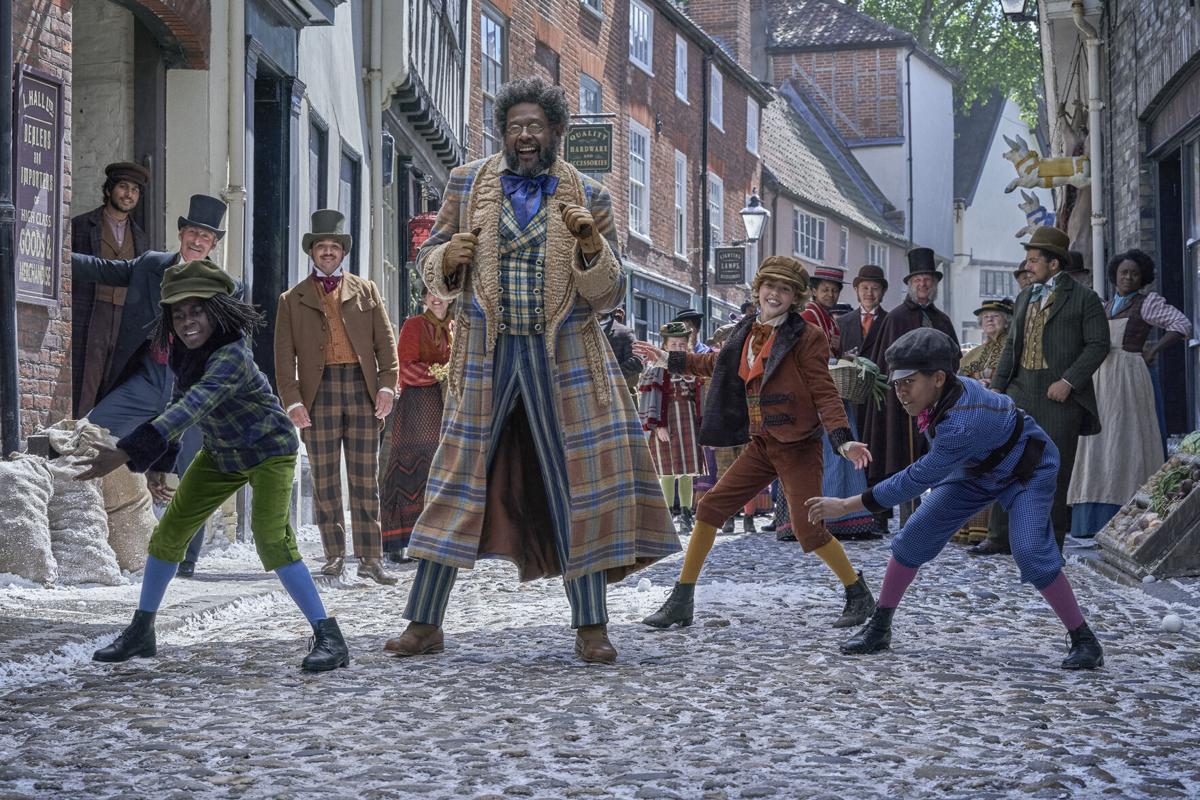 It's "the most wonderful time of the year" in a year that for many is the most horrible they can remember. That gives this year's crop of holiday-themed movies the added weight and expectation of lifting spirits that have likely been very low indeed.

The very idea of what makes for a holiday movie is, of course, itself a point of spirited contention — eccentric choices such as "Die Hard," "Metropolitan," "Eyes Wide Shut" and "Kiss Kiss Bang Bang" can be just as satisfying as the more obvious likes of "Elf," "It's a Wonderful Life," "Bad Santa," "How the Grinch Stole Christmas" and "Miracle on 34th Street."

This year, the musical "Jingle Jangle: A Christmas Journey," directed by David E. Talbert, has already been released to great acclaim, with The Times' review declaring that the Netflix film "stands to join the ranks of holiday movie classics." The streamer, which also has the Debbie Allen-helmed " Dolly Parton's Christmas on the Square" on tap, has become increasingly active in holiday content, joining TV outlets like Lifetime and Hallmark in an annual barrage of seasonal offerings.

While there are obvious reasons for audiences' continuous appetite for holiday fare — the season does roll around every year, after all — some motivations for the perennial holiday boom are perhaps more subtle.

According to Alonso Duralde, author of the Christmas movie guide "Have Yourself a Movie Little Christmas," holiday-themed stories, going back at least as far as Charles Dickens and "A Christmas Carol," aim to spotlight some essential goodness in people.

"We look at the holidays as being not just a time for family togetherness and renewal, but I think there is a narrative that runs through a lot of these movies as the idea of Christmas being a time for redemption; it's a time for people to rediscover their best selves," Duralde said. "It's the time for long-standing rifts to be mended, for people to have the conversation that they should have had decades ago.

The playfully serious rom-com "Happiest Season" is the second feature directed by DuVall, the veteran actress recently seen on "Veep." In the film, Mackenzie Davis' Harper and Kristen Stewart's Abby are a cohabiting couple. Abby plans to propose over the Christmas holiday, until she learns that Harper is not out to her family. The cast also includes Victor Garber and Mary Steenburgen as Harper's parents, Alison Brie and co-writer Mary Holland as her sisters, Aubrey Plaza as an old flame and Dan Levy as Abby's close friend.

"I have always loved holiday movies, the way they become a part of our lives in a way that other movies don't," DuVall said. "But I had never seen my own experience represented in a holiday film. If there is an LGBTQ+ character, they're always in the background or don't really have any real meaningful character happening. So 'Happiest Season' just felt like such a great opportunity to tell a universal story from a new perspective."

The film was initially to be released by Sony's TriStar Pictures, making it the first queer Christmas film released by a major studio, but as COVID-19 continues to leave movie theaters in a state of flux, the studio sold it to Hulu in October, while retaining international rights.

"It felt very significant to me to have this movie come out in the theater, for people to be able to go in and buy a ticket and sit in a movie theater and watch it," DuVall said. "In the very beginning, that was something that was very important to me, and Sony was really excited and really supportive of the movie. And we had a very big release plan for the film. But then, obviously, our world changed and, on a moral level, it didn't feel right to be encouraging people to go to a movie theater.

"There's nothing I love more than going to the movies. And I won't feel safe going to the movies for a very long time," DuVall said. "Holding on to this movie didn't feel like the right thing to do. It feels like a very good time to put something like this out into the world because it is warm, it is hopeful, it is meant to make people feel good. It's uplifting, and I think after the year we've had we all need that. That's what I'm searching for every single time I turn on the TV, what's going to make me feel happy."

"Godmothered," which will stream on Disney +, has quite a bit of fun subverting the tropes of a Disney princess project. Jillian Bell plays Eleanor, a fairy godmother in training in a fantastical land known as the Motherland, which is in danger of being shut down. Eleanor sneaks off to Boston to help Isla Fisher's Mackenzie, a widowed mother of two girls looking for new romance and to get her life restarted.

Sharon Maguire, best known for directing " Bridget Jones's Diary" and " Bridget Jones's Baby," was drawn to the screenplay, credited to Kari Granlund and Melissa Stack, for the opportunity to mix comedy with magic and visual effects. Set during the holidays, the film adds a Christmas theme to the mix as well.

"It's very hard to get the holiday movie right," Maguire said. "That's what intrigued me about it. I thought: This is something to be beaten. Because so many of them I've watched with my children as they were growing up, I thought, 'Nope, no.' And you know it, because the children just turn off.

For Maguire one of the goals of the movie was to inspire the same perennial affection as her family has for the movies they watch year after year, like " Groundhog Day," "Elf" and "Enchanted."

"The Christmas Chronicles: Part Two" is a sequel to the 2018 Netflix original. It opens with young Kate (Darby Camp), who had a wild adventure with Santa Claus in the first film, upset to be spending the holidays on a tropical vacation with her family and her mother's new boyfriend and his son Jack (Jahzir Bruno). When a rogue elf, Belsnickel (Julian Dennison), uses Kate and Jack to launch a plan to ruin Santa's village and rob Santa of his powers, the two team with Santa and Mrs. Claus (Kurt Russell and Goldie Hawn) to save Christmas once again.

"I personally am not a fan of 95% of so-called holiday movies," Columbus said. Nevertheless, in a recent conversation he cataloged how many films he has been involved with that have the holidays as a setting, whether darker stories like "Gremlins" or comedies like "Home Alone." Columbus also noted that the first "Christmas Chronicles," which he produced, bore a marked resemblance to his directorial debut, "Adventures in Babysitting," for the way it was basically about a big night out in Chicago, complete with a musical number. (The new film boasts another musical number, this time Russell and Darlene Love dueting on a new song by Steve Van Zandt, "Spirit of Christmas.")

The filmmaker admitted he isn't quite sure what draws him back to telling stories set around Christmastime, aside from his understanding of the dramatic tension that is a natural part of the season.

"I love the time of year," he said. "If you look at it in a deeper way, I think part of it is the fact that holidays are meant to be the most joyous time of the year. And for every holiday season, there's a lot of depression, there's a lot of unemployment, there's a lot sadness. And it's always a fascinating time, like setting a film during wartime. So many holiday movies don't deal with that, those kinds of emotional complexities. Even if they're not said, it should be subconscious within the film.