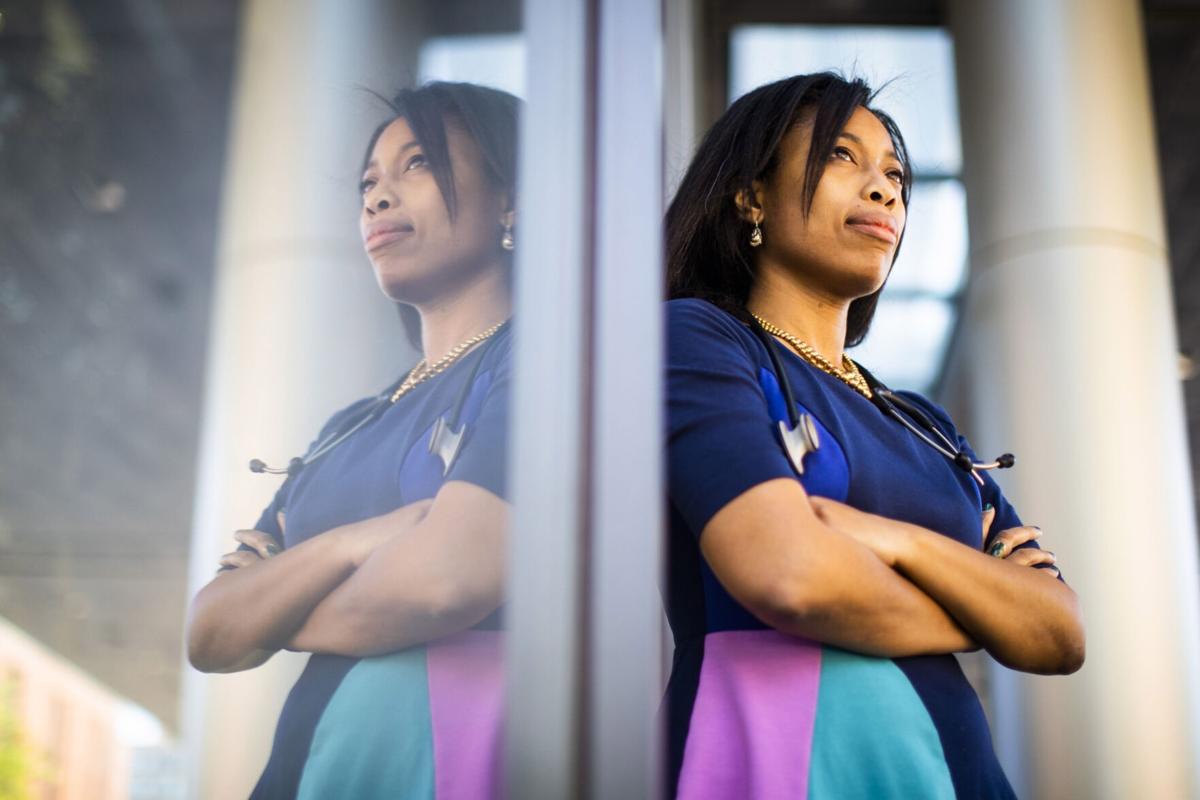 CAUTIOUS: Dr. Cassandra Pierre poses for a portrait outside of the Boston Medical Center in Boston on June 17. Adam Glanzman/Bloomberg 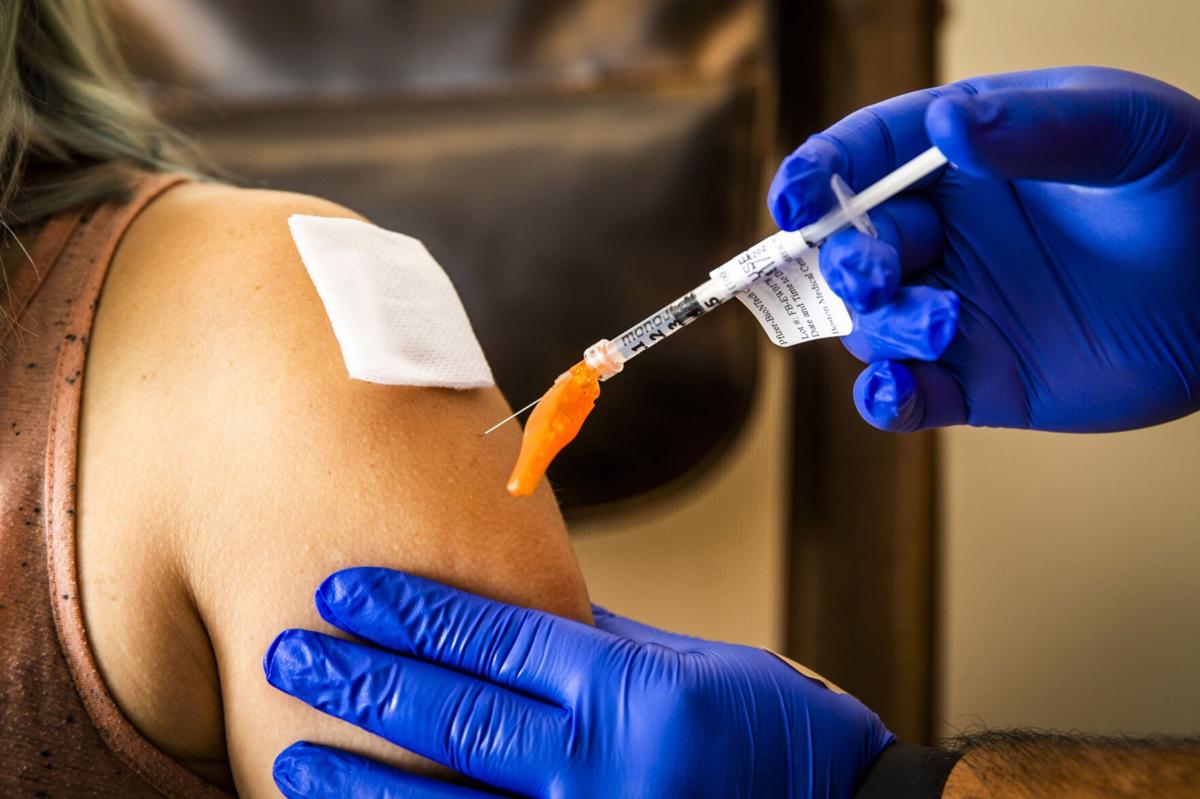 VACCINATED: A nurse administers a Pfizer BioNtech COVID-19 vaccine at the Boston Medical Center in Boston on June 17. Adam Glanzman/Bloomberg

This week, the COVID-19 count hit zero. There were precisely no patients with the virus in the entire sprawling urban hospital, which had borne a heavy load through the pandemic.

"Hurray!" said epidemiologist Cassandra Pierre, adding that she was in a "relentlessly and uncharacteristically cheerful" mood after getting the news Wednesday. "At the same time, this is not all joy and roses and releasing balloons. We've had a rough year, and it's going to take some time to recover from that."

COVID-19 counts are hitting the zero mark elsewhere as well. On Tuesday, California's Marin County announced there were no COVID patients in local hospitals for the first time in over a year. Ditto for the COVID unit at the medical center in Chapel Hill, North Carolina. New York's rates have fallen so low that two dozen counties reported zero positive tests in mid-week data.

No one in American health care is declaring victory over the virus. But with national vaccination rates passing the 50% mark and zeros proliferating, many are marking a change that grows more dramatic by the day, and is starting to bring cautious downshifting in some COVID health-care operations.

This month, Yale-New Haven Hospital closed its last pop-up COVID intensive-care ward, 28 beds on the top floor of the Smilow Cancer Hospital that had held many desperately ill patients. A small, somber ceremony marked its ending.

"We're moving on to another chapter," said outgoing medical ICU director Jonathan Siner. "The disease is not gone. But the idea that it will overwhelm the hospital, that you'll have to take large pieces of the hospital and totally repurpose them, I think that chapter is closed -- at least for us and those lucky enough to practice medicine where there is vaccine availability and a high vaccination rate."

This Wednesday, the Cambridge Health Alliance in Massachusetts shut its special coronavirus call center. At peak, its 15 virus-specialist staffers had been handling more than 1,000 calls a day from people with urgent questions about the virus.

With call volume dropping, "We've finally decided to pull the trigger and have those calls go back to our primary-care sites," said outpatient COVID medical director Jessamyn Blau. "The virus is going to be with us a long time," and so a broad range of staffers need to be able to handle calls about it.

Zeros are fast becoming the norm in many emergency departments around the country, said James Augustine, a spokesperson for the American College of Emergency Physicians.

His colleagues are "thrilled they have days with no COVID patients," he said, and to see that patients with other maladies are no longer terrified to come in.

Augustine isn't fazed by the likelihood of a bump in other infectious diseases. "When people start getting together again, they're going to give each other strep and the common cold and lice and scabies, and all the sexually transmitted diseases will increase again, and this is expected," he said.

New York City emergency physician Craig Spencer noted in wonder that during a recent shift, he helped a patient hurt in a motorcycle accident and pulled a large winged insect out of someone's ear -- but saw not a single COVID case.

He's now had several such COVID-free shifts, and says he welcomes the contrast with the "cacophony of coughing" he described during the spring 2020 surge: "We know COVID isn't over, of course. But after the year we've had, it feels really great to have our old job back."

At Boston University, health officials have been running nearly 10,000 coronavirus tests of summer students and staffers per week, and averaging zero positives for the past two weeks. The university's contact tracers, lacking contacts to trace, have shifted to reviewing the proof of vaccines that students need to return to campus.

Summertime numbers have dropped before, said Judy Platt, BU's director of health services. "But I think these zeros do represent something," she said. "This feels more lasting. And the vaccination is really the piece behind that."

Vaccination rates vary, and some spots are still seeing a significant rise in cases, including Colorado, where Mesa County's largest hospital is seeing a spike, and Wyoming, where hospitalizations have been climbing.

They contrast with areas like St. Cloud, Minnesota, where the health department this week reported zero new cases. In the Lansing, Michigan, area, the Ingham County Health Department on Tuesday night tweeted, "For the 1st time in a year, ZERO new cases were reported to ICHD today. Yes, this is cause for celebration! But no, we aren't done with COVID-19 quite yet."

In Vermont, where 80% of the population has been vaccinated, the seven-day average of deaths is now zero, and of cases is seven.

The first few hospital announcements of hitting zero came last month, including in San Francisco, Alabama and Utah. Now, even some major institutions are getting close: Massachusetts General Hospital is down to six patients with COVID, three in the ICU; the University of California at San Francisco hospital has five, including two children.

With concerns about the more transmissible Delta variant rising, reaching zero is cause for jubilation but not unmitigated relief.

"We all know it's not over," said Lisa Mashburn, a Cambridge Health Alliance nurse practitioner. Still, she said, when she recently saw that her list of pregnant patients had no coronavirus cases, "I definitely teared up," hit by "an overwhelmed feeling, knowing that yes, the last year has been tough, but maybe we're moving beyond that."

Boston University's Platt and her colleagues will be holding their breaths through the first weeks of school this fall, she said. "If our cases stay low, and we have beautiful zeros again, we are all going to breathe a sigh of relief."