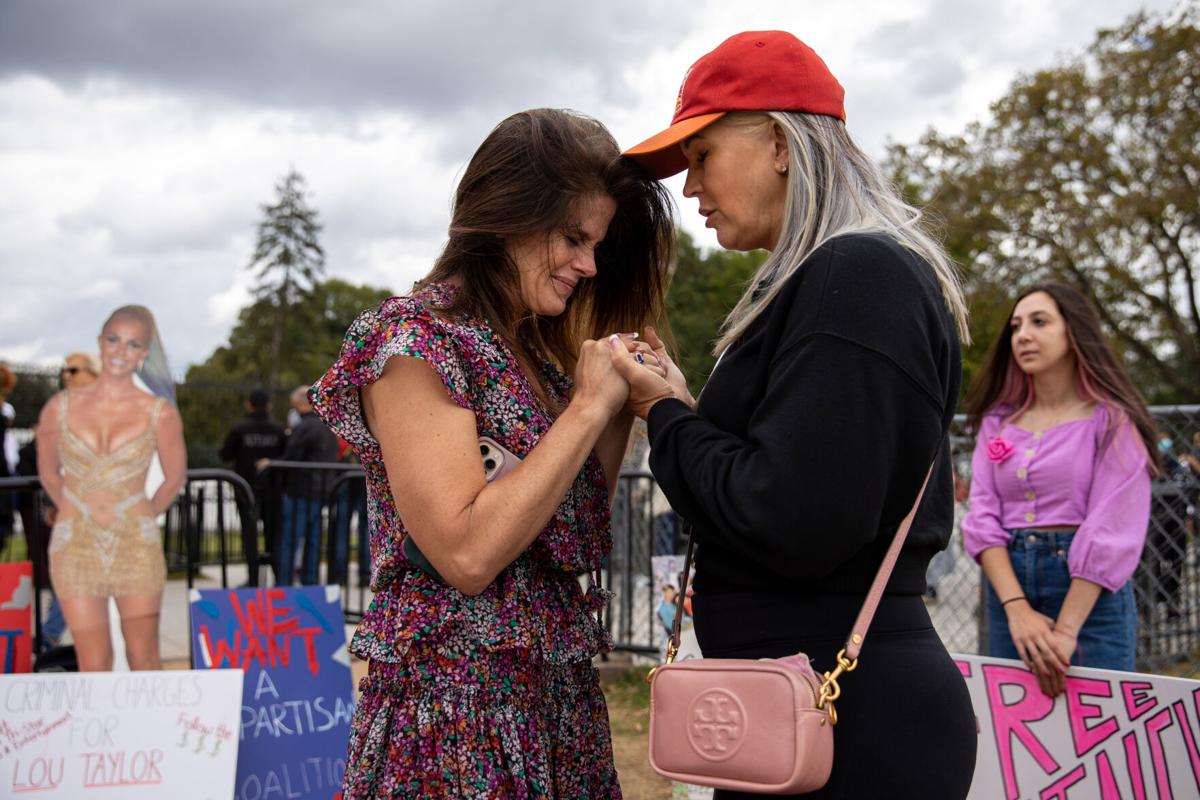 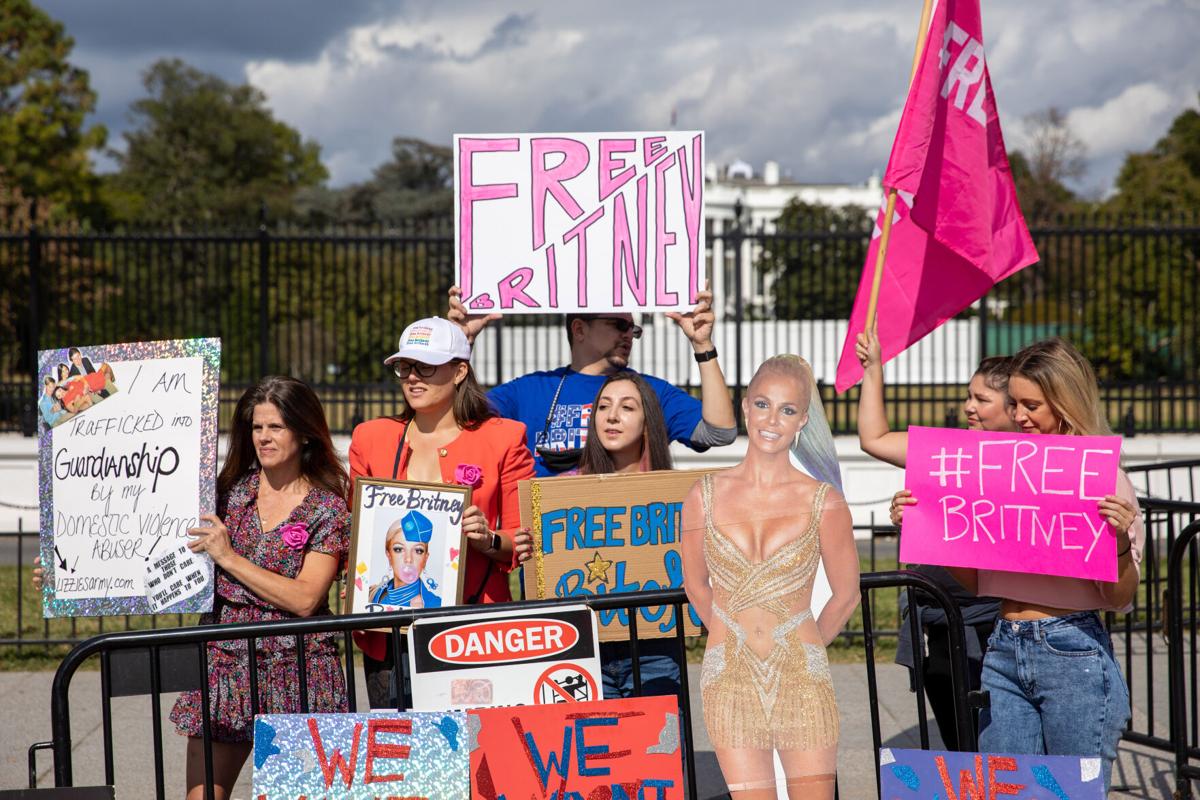 HELPING BRIT: Protestors holding signs advocating for the end of Britney Spears’ conservatorship sit outside the White House with a cut-out of the singer during a ‘Free Britney Spears’ rally in Washington, D.C. on Saturday, Oct. 23. Amanda Andrade-Rhoades/For The Washington Post

HELPING BRIT: Protestors holding signs advocating for the end of Britney Spears’ conservatorship sit outside the White House with a cut-out of the singer during a ‘Free Britney Spears’ rally in Washington, D.C. on Saturday, Oct. 23. Amanda Andrade-Rhoades/For The Washington Post

WASHINGTON - The music was thumping, the pink flags were flying, and despite the low turnout, the Free Britney campaign was back in the nation's capitol (baby, one more time). Fewer than two dozen protesters gathered outside the White House Saturday for their third rally this year in support of ending the 13-year legal conservatorship of pop superstar Britney Spears.

The movement, which has been buoyed by social media furor and viral documentaries, marked a major success last month when a Los Angeles judge ruled that Spears's father, Jamie Spears, would be suspended as the conservator of her estate. Though a November hearing could end the conservatorship entirely for the pop star, the legions who mobilized on her behalf are aware that the 39-year-old icon is far from the only one stuck in an allegedly toxic arrangement.

"Jamie is only part of the problem," said Cassandra Dumas, who has co-organized the "Free Britney" rallies in the District of Columbia. "If we want meaningful change in this country to happen, we need to look at all the bad actors associated. There is a system in place that allows this kind of corruption to happen."

Dumas's dedication to superstar may date back to the VHS recordings of her preteen self bopping to the opening line of "Lucky." But the 32-year-old software professional and Air Force veteran didn't invest hours in permit applications because she wants to see Spears onstage again.

She and the founders of the group Free Britney America are pushing for federal legislation. They say they have been involved in the conception of the Freedom and Right to Emancipate from Exploitation Act, a bipartisan bill to make conservatorships more transparent. Free Britney advocates are demanding the restructuring go even further to include criminal penalties for those found to be exploiting the system.

On Saturday, their mission was to, yet again, try to be seen as more than just a dance party. Their message to the tourists around the White House: Come for the fuchsia glitter, stay for a lesson on fiduciary abuse. And disability discrimination. And judicial accountability.

And "the tension between empowerment and paternalism," explained Melanie Carlson, a PhD candidate whose academic research and personal experience living with Parkinson's disease got her interested in Spears's case.

But while Twitter threads and news articles have highlighted the systemic issues inherent in the singer's story, Carlson worries that once Spears has been officially released from her conservatorship, the attention and momentum will fade. Looking at the modest crowd who turned up on a sunny afternoon, she could see it already had.

One by one, people with personal experience with conservatorships took to the microphone in hopes that stories of people who weren't Grammy winners would resonate with passersby. Standing beside a cardboard cutout of a life-size gold-sequined Spears, they spoke of the aging parents they couldn't get power of attorney over; the judges who seemed not to listen; the way they struggled to explain their plight until they could say, "It's like what happened to Britney Spears."

"Is it over?" asked Jonathan Martinis, a disability rights attorney involved in the case of artist Peter Max, whose dementia sparked a battle for control over his work. "Is it over with one person out of approximately 1.3 million people in guardianships and conservatorships across the country?"

The activists shouted, "No!"

The tourists navigated around them, making their way to take selfies.

But one speech seemed to get their attention. A petite brunette woman took the microphone to explain a case close to her heart.

Amira Saudi introduced herself as the creator of the Twitter account @FreeBynes, which has been raising questions about the well-being of another '90s star.

"Amanda Bynes has been in a conservatorship since 2014," Saudi said. Multiple groups of onlookers hovered. And for a moment, the "Free Britney" advocates got them to listen.