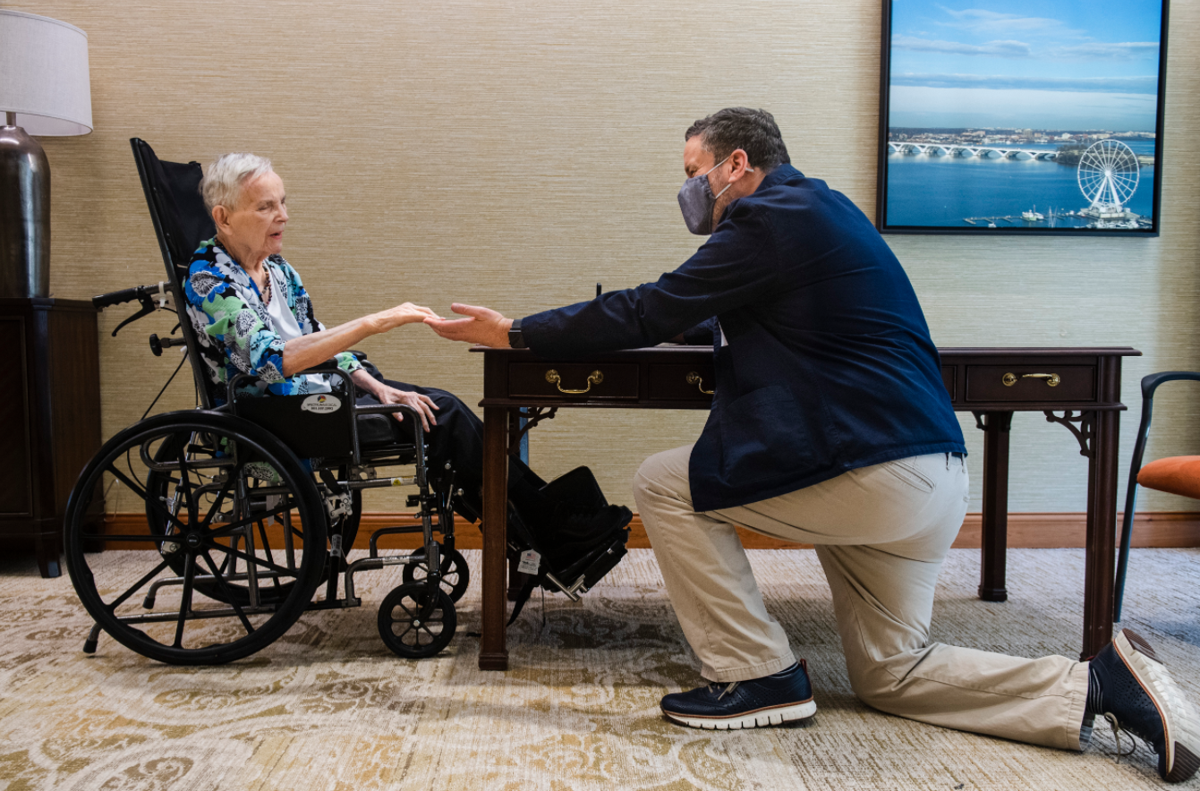 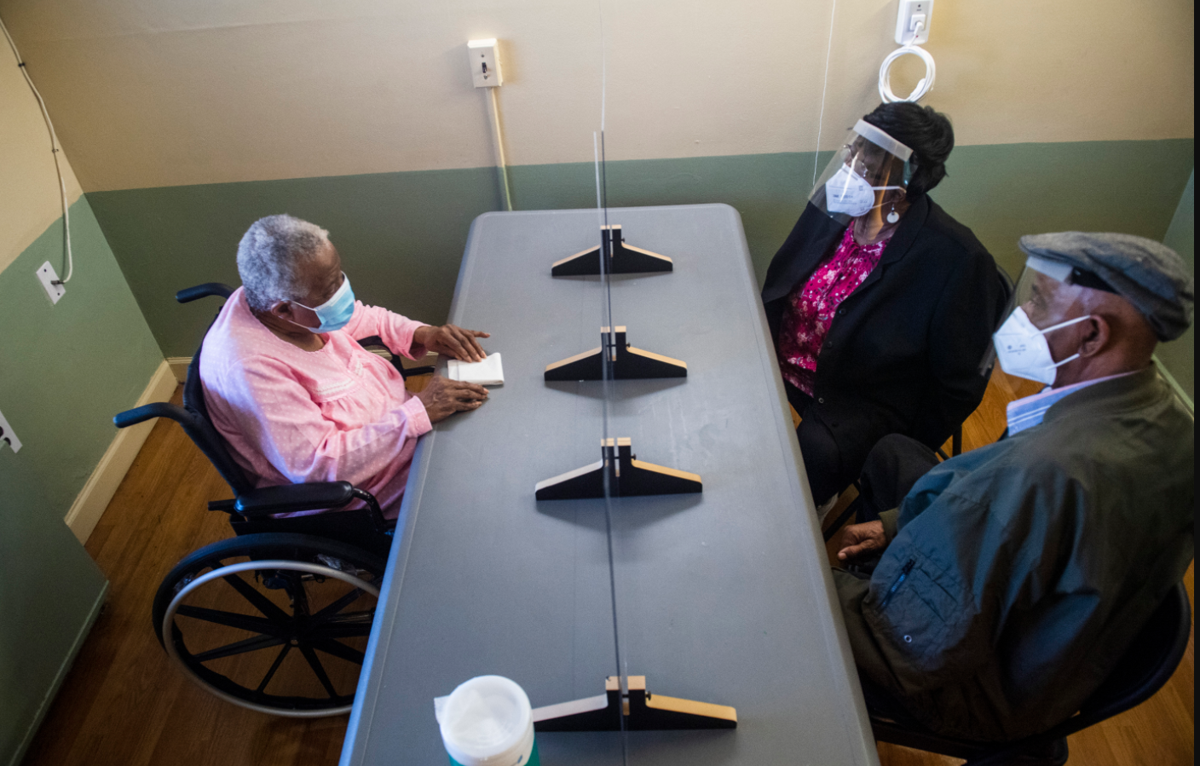 THE WAIT IS OVER: Mattie Bell, left, and her sister, Alice Berger, phone several times a day but this is the first time they've seen each other since October. They are shown with Berger's husband, Jessie Berger, on March 11, 2021, at the Villa Rosa Nursing and Rehabilitation Center in Mitchellville, Md. Amanda Voisard/The Washington Post 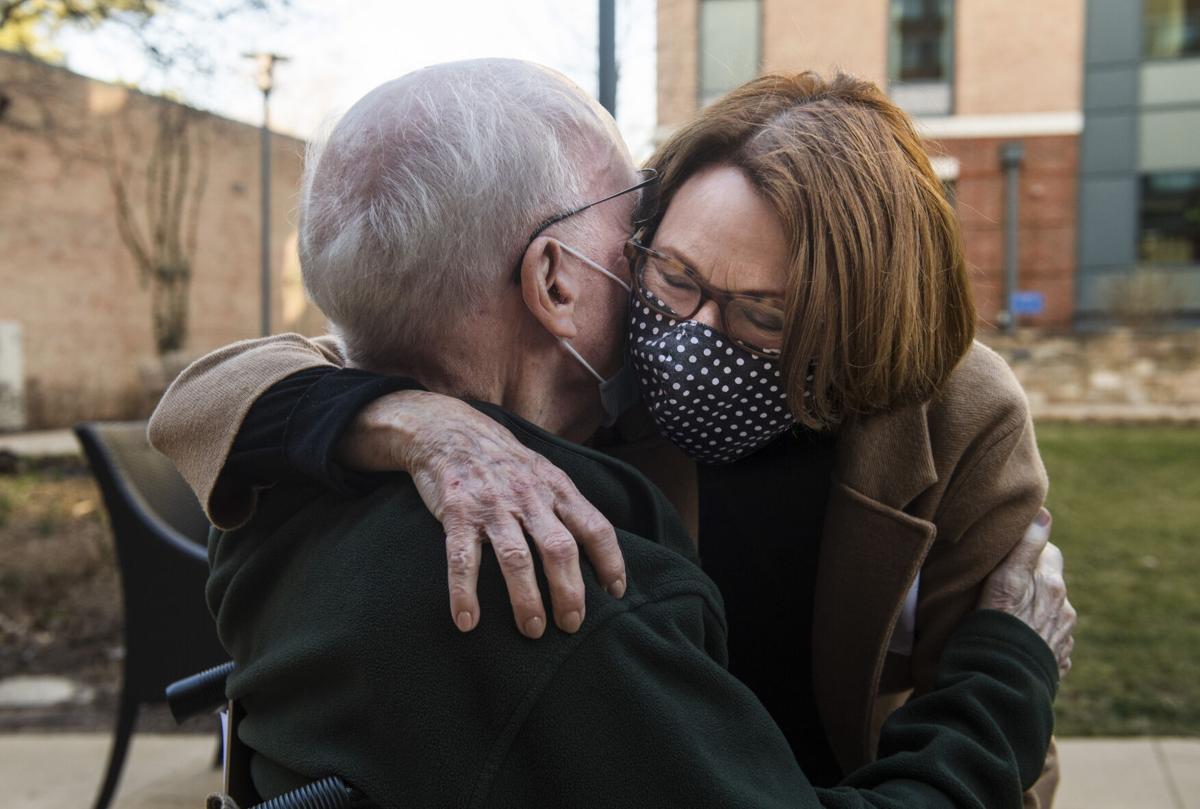 'MOMENTS YOU DON'T GET BACK': Pamela Farrand visits her husband of 48 years, Bill Farrand, on March 20, 2021, at Goodwin House Alexandria in Alexandria, Va. Farrand, 86, who moved into the facility after a stroke in 2019, says he had missed so much in his six grandchildren's lives this past year: "Those are moments you don't get back." Amanda Voisard/The Washington Post

THE WAIT IS OVER: Mattie Bell, left, and her sister, Alice Berger, phone several times a day but this is the first time they've seen each other since October. They are shown with Berger's husband, Jessie Berger, on March 11, 2021, at the Villa Rosa Nursing and Rehabilitation Center in Mitchellville, Md. Amanda Voisard/The Washington Post

'MOMENTS YOU DON'T GET BACK': Pamela Farrand visits her husband of 48 years, Bill Farrand, on March 20, 2021, at Goodwin House Alexandria in Alexandria, Va. Farrand, 86, who moved into the facility after a stroke in 2019, says he had missed so much in his six grandchildren's lives this past year: "Those are moments you don't get back." Amanda Voisard/The Washington Post

WASHINGTON — It had been more than a year since Kevin Kennedy had touched his wife, and he wanted to hug her. He wanted to sit next to her in their favorite love seat, sharing earphones from the iPod nano that had a carefully curated playlist of her favorite songs. He wanted to hold her hand and dance.

But this visit would not be like those before the pandemic began.

Kennedy settled for sitting 6 feet from Penny Niland, 76, outside the suburban memory care facility where she receives care for Alzheimer's disease. He played Frank Sinatra and the Beatles from his iPad, searching her face for a reaction. She mostly stayed silent.

As coronavirus case rates decline and vaccinations rise, long-term-care facilities are reopening for visitors in an atmosphere transformed by loss, uncertainty and fear.

Hugs and kisses are allowed at some facilities, but not at others. Some communities have had to abruptly cancel reunions because of new outbreaks among unvaccinated employees or residents. Families say the encounters can be both joyful and devastating.

A 91-year-old near Richmond, Va., has grown so withdrawn that he sometimes refuses to talk to his daughter. In suburban Alexandria, Va., a son wondered whether his mother recognized him underneath his mask. Nearby, a Navy veteran lamented the moments he had missed in the lives of his six grandchildren.

"The older person will have changed," said Dan Blazer, a longtime psychiatry professor at Duke University who has studied the effects of isolation. "They are not as healthy. Maybe their memory is not as good as it once was. It won't be just a gradual change. It'll be like going down a step."

Arbor Place, the small, private facility where Niland lives, has taken a particularly cautious approach toward infection control throughout the pandemic. During the first surge of cases in Montgomery County, Executive Director Deborah Fanburg said, some staff members sheltered in place to avoid bringing in the virus from outside.

All employees and residents are now vaccinated. But the facility's medical experts still say there are too many unanswered questions to permit close physical contact, including whether a vaccinated resident could catch the virus from a visitor and transmit it asymptomatically.

The coronavirus has spread through the facility twice, Fanburg said, and employees are determined not to allow a third outbreak.

That's why Kennedy, 62, had to sit outside, across a wooden table from Niland, when he visited one recent afternoon.

"Are you having a good time?" he asked at one point.

Niland's eyes flicked open and focused on him. "Yeah," she said, laughing.

"Yeah? Me too," her husband replied. "I'm sorry I have to be over here a little bit."

Kennedy, who works for the U.S. Climate Initiative, said he understands the facility's cautious approach. But it doesn't diminish how much he wants to hold his wife, who was diagnosed with Alzheimer's about a decade ago and has lived at Arbor Place since 2018.

"In some ways," he said after the meeting, "it was almost harder to be so close and not be able to give her a hug."

The Centers for Medicare and Medicaid, which regulates skilled nursing facilities, on March 10 released guidance urging them to resume indoor visitation, with few exceptions. The agency recommended that residents and visitors maintain physical distance but added, "If the resident is fully vaccinated, they can choose to have close contact (including touch) with their visitor while wearing a well-fitting face mask."

Geriatrician Michael Wasserman said the memo is being interpreted in various ways by states, localities and individual facilities, which must weigh the dangers of continued isolation against the risk of spreading infection.

After being pummeled by the virus, which has killed more than 174,000 of their residents and employees, facilities "are scared to death that if they take the wrong step, then they are going to be punished or sued," Wasserman said. "There is a lack of internal consistency right now that is only going to create havoc."

Elaine Aston Lankford planned to hug her mother, Dora Aston, 86, for the first time in a year on Wednesday when she visited Autumn Care of Suffolk in southern Virginia.

But when she arrived with her mother's favorite chocolate treats, staffers said they had to stay 6 feet apart, even though her mother is fully vaccinated. Aston Lankford eventually convinced those in charge to let her sit next to her mother, where she could touch her leg and hold her hand. Still, she left feeling frustrated.

"This should have been a joyous day," Aston Lankford, 49, said after the visit.

Autumn Care did not respond to requests for comment.

In Henrico County, Va., Lynette Jackson's father spent 20 days in February quarantined in his room at an assisted-living facility because of a coronavirus outbreak. He has been vaccinated, but he has become so depressed that he sometimes refuses to talk with her.

On a recent visit, Jackson said, a sympathetic aide let her hug her father, even though it is against the facility's rules. (CMS regulates only skilled-nursing facilities, not assisted-living facilities).

While vaccinations have significantly suppressed infections at nursing homes nationwide, there are still active coronavirus outbreaks – including at more than 70 facilities in D.C., Maryland and Virginia as of last week.

Among them was the Village at Rockville, Md., which paused in-person visits after an employee tested positive. This meant that Len Sotksy, 79, had to cancel a visit to see his wife, Mary Anne, who has Alzheimer's.

During their meeting the previous week – one of two they've been allowed to have in recent months – she spent their 20 minutes together singing to him: "My love, my love is here."

It is not only employees who pose a risk. Although vaccine uptake has generally been high among residents, some have declined to get a shot, including Mattie Bell, 88, a cancer survivor who said that after twice testing positive for the coronavirus, she decided she did not want the vaccine.

She is in the minority of residents who have refused to be inoculated , about 13%, at the Villa Rosa Nursing and Rehabilitation Center in suburban Mitchellville, Md., administrator Barry Grofic said.

According to CMS, indoor visits should be allowed for unvaccinated nursing home residents, too, as long as the positivity rate in the surrounding community is low and at least 70% of the facility's residents have been inoculated.

When Bell's sister, Alice Berger, 82, visited her last week, there was no touching allowed, and they had to sit on opposite sides of a table and a plexiglass barrier.

"They sure keep you protected," Berger told her older sister, with whom she speaks by phone twice daily but had not visited in nearly six months.

"I look like a Martian," Bell laughed through her mask. "Something from outer space."

Even at facilities that allow physical contact, it is difficult for elderly and infirm residents to erase the pain of lengthy separations from their families.

Bill Farrand said it felt wonderful to hug his wife and breathe the fresh air in the courtyard of his long-term-care facility in suburban Alexandria, Va., one recent day, after months spent almost entirely indoors.

But as Farrand, a former U.S. ambassador, sat down to sign a birthday card for the youngest of his six grandchildren, he felt a twinge of sadness. He had missed so much in their lives this past year – celebrations, games, even just the mundane parts of growing up.

"That's what makes me saddest," said Farrand, 86, who moved into the facility after a stroke in 2019. "Because those are moments you don't get back."

Goodwin House Alexandria, a continuing-care community that includes a nontraditional nursing home, allows physical contact between vaccinated residents and visitors but requires that visitors produce a negative coronavirus test before the meeting.

The reunions, caregivers say, have been bittersweet.

Dixie Kaufman, 79, brought cookies and a folder of documents when she came to see longtime friend Leonard Vaughan, 88. It had been impossible to help him sort out his taxes through earlier "window visits" or FaceTime calls, so she was pleased finally to have him in front of her.

Looking at Vaughan leaned over in his wheelchair, however, Kaufman couldn't help noticing how much more lethargic he seemed compared to a year ago.

"The pandemic has diminished all of our qualities of life, but especially for him," she said of her friend, who never married but until recently had an active social life. "He so much just wants to be his old same self."

Down the corridor, Rich Taylor had just finished a two-hour drive from Delaware to meet with his mother. Wearing a navy jacket and a smile underneath his mask, Taylor, 53, reached out his hand.

"Hi, Jan Taylor, do you recognize me?"

The 92-year-old woman in the wheelchair furrowed her brows. It had been months since she had seen any of her three children in person.

Given her dementia, she hadn't always understood the details of the nursing home's health precautions.

But she had certainly felt the absence of her regular visitors, her caregivers said.

For this special day, her white hair had been combed neatly to the side, and she wore a silky blouse, paired with bright red lipstick.

But when Taylor rubbed her hand, then reached to scratch her back in the exact way she liked, her face softened.

She leaned into his arm and smiled.