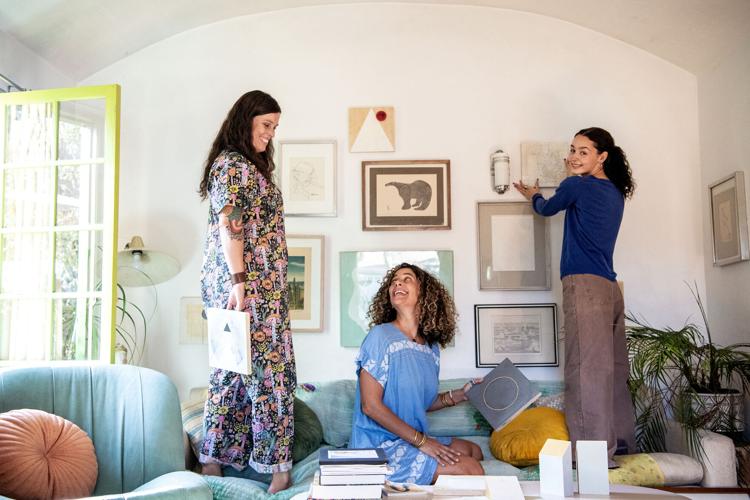 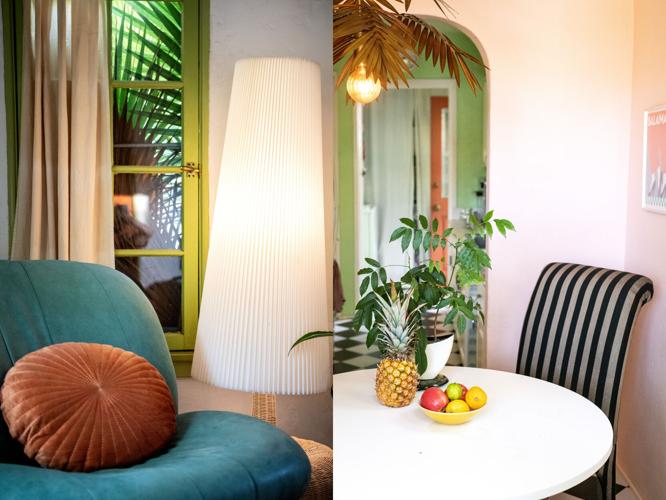 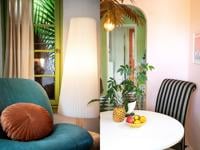 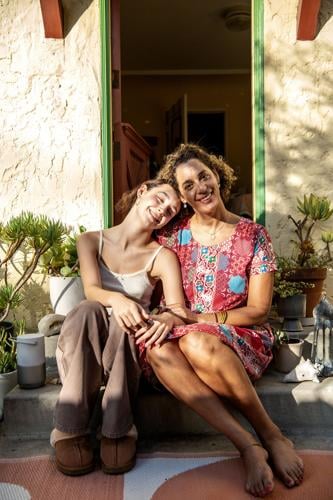 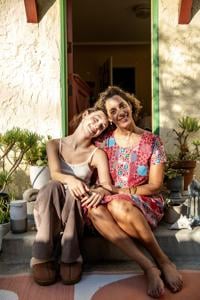 LOS ANGELES — When Faith Blakeney, an interior designer known for her all-embracing, soulful interiors, first laid eyes on a charming Spanish rental in Culver City three years ago, the single mother was living with her daughter, Noa, in a 600-square-foot granny flat in Palms.

"I had been dreaming of a house," Blakeney recalls. "My boyfriend and I had been hunting for a house for a while. When I saw the turmeric-colored rental, I thought, 'This is the house.' I sat on the curb outside the house and prayed. I envisioned us in the house. I manifested the house. The neighbors must have thought I was crazy."

After a mutual friend connected Blakeney with Sally Montana, a German-born photographer who splits her time between Los Angeles and New York, the two of them met over Skype and Blakeney offered her a virtual tour.

Her manifestation worked. After calling the homeowners and sending them a portfolio filled with photographs, their personal history – even their credit scores – Blakeney, 45, got the three-bedroom rental, even though it was a huge leap of faith, financially speaking.

"For the first time in 10 years, I would have my own bedroom, a bathtub and a washer and dryer," says Blakeney. The house also would allow her to set up her design studio in the two-car garage behind the house.

Noa was excited to be able to have friends over. "I'd never had a yard before," she says. "Our place was so small, my mom was sleeping on the floor."

"I slept in a niche off of the living room," her mother elaborates. "It was incredibly charming. It wasn't high enough for a bed so I put a mattress on the floor. It wasn't as sad as it sounds. But yes, I slept there for 10 years."

Several months later, when Blakeney and her boyfriend "lovingly uncoupled," the designer found herself in a difficult situation.

"I was terrified," she says. "Even sharing the rent with someone else, I was paying 2.5 times more rent than before. I knew that I needed to stay in the house for continuity for my daughter. But I also knew very clearly that I needed to find someone to help."

Blakeney had always wanted to experiment with communal living. She had grown up that way in Berkeley with her two siblings, including Justina Blakeney of Jungalow fame. "We always had family staying with us," she says. "In my soul, I'm a kibbutznik: I get nurtured and nourished by having people around."

Even though it was unconventional, she was excited by the prospect of living with a housemate. She also was concerned. "I wasn't going to accept anyone into the house," she says. "That person was going to have to be special and accepting of moving in with me and my daughter."

For teenage Noa, her mother's predicament was embarrassing. "None of her friends lived in a situation like this," says Blakeney.

Blakeney cast a wide net, by reaching out to friends and posting on Spare Room, an online roommate-finding site. "I talked to several people and even had people approach me who were single parents," she says. "Some men applied, and while I thought it might be nice to have some male energy in the house, I didn't think that would work."

Many of the people who inquired were college-age students.

"There are less people in our age range who are doing the housemate thing," she says. " A lot are put off by the stigma. It's time to shake things up a bit!"

After a mutual friend connected Blakeney with Sally Montana, a German-born photographer who splits her time between Los Angeles and New York, the two of them met over Skype and Blakeney offered her a virtual tour.

"Sally literally showed up on our doorstep with two suitcases," says Noa. "I'm so glad she did; she makes our house feel like home."

Despite the fact that both of them are fire signs, Blakeney and Montana are opposites. Blakeney is an extrovert. Montana is an introvert. Montana is a neatnik and Blakeney and Noa are ... less so. While Blakeney likes to blast music and dance, Montana likes her time alone. As a student and assistant instructor with the Chinese Hawaiian Kenpo Academy in New York City, she can often be found practicing karate in the living room.

Yet despite their differences, the creative freelancers have come to appreciate many of the same things: friends, family and Noa.

Asked if people questioned her decision to move in with a single mother and a 13-year-old, Montana admits she was nervous but has come to enjoy the co-housing dynamic. "I never wanted kids," says Montana, 44. "But I've enjoyed having the slightest impact on Noa. I didn't have a circle of women growing up. I wish I did."

Blakeney views their differences as an opportunity to grow and understand others.

"If I had it my way, I'd start my day blasting music, dancing and talking loud on the phone. Instead, I wake up and I'm quiet. I put my headset on, I go on a walk and try to honor their vibe. It doesn't always work. They have to be patient with me and honor my vibe too. It's great practice for being out in the world: You're not always going to be around people who are like you."

"Before, I used to hole up in my apartment," Montana says. Now, she is more social and appreciates having people around. "When I came home from a business trip recently, people were in the backyard for a birthday party, laughing and having fun. There was leftover food. It was a nice feeling."

Likewise, Blakeney came home and heard laughing in the yard. "Sally was having a full moon bonfire ... with my mother," Blakeney says, laughing.

"I feel like Faith's parents adopted me," adds Montana.

"How could I not?" Blakeney's mother, Ronnie, responds with a warm smile.

It's obvious from what you see in the home, which is nestled on a tree-lined street, that Blakeney is interested in creating a relaxed, lived-in bohemian vibe for herself and her family. The house is filled with art, colorful kantha throws, houseplants and vintage furnishings and accessories. The kitchen, which is also filled with art, stands out for its black-and-white checkered flooring, pink walls and a vintage brass pendant she found on the online vintage marketplace Chairish.

"I've always been a treasure hunter since I was very young," Blakeney says. "My father used to take me to the auction house to buy furniture for our home, and our family home was full of antiques, and so through the years I've collected art and furniture. In our kitchen, we don't have any new plates or silverware. They are all vintage. It's a fun hodgepodge, and every time a glass breaks at a party, I consider it an opportunity to go search for new, more awesome cups. That's how our whole house is. There is very little that is precious."

Darby Saxbe, director of the USC Center for the Changing Family, isn't surprised to hear of the women's living arrangement. "It's a positive trend in my mind," Saxbe says. "We are not built to live the kind of lonely, isolated lives that you so often see in a car-centric city like Los Angeles. Co-housing circles us back to earlier modes of living where we formed community bonds that can be interdependent and help with things like child care."

"I think the pandemic was a wake-up call for a lot of people," Saxbe continues. "When we were in lockdown, people felt even lonelier and it led them to take stock and be more mindful about building connections. Home prices and commuting have made us more isolated and separated." (According to a recent report by the listing portal Rent, about half of the 100 most expensive cities for rent in the U.S. are in California.)

Blakeney agrees. "I've lived in Berkeley, Italy, New York and Los Angeles, and one thing I learned during the pandemic is that people are really alone here," she says. "People are isolated, and it's ironic because we spend so much of our time and energy and money trying to live on our own. People want a house and don't want to share their apartment. The next thing you know, you're alone every day. You're working your a-- off to pay for it. I feel like we got it all wrong. And it's costly to us. Not only financially, but to our mental health."

Now that the three women have fallen into a comfortable rhythm, the hardest part is deciding what's next.

"At a certain point, Noa and I will grow out of this space, and I definitely see us moving out sooner than later," says Blakeney, who is in a relationship. "I see this as a really beautiful moment and opportunity to have the kind of experimental co-living that I've always dreamt of. I've found I love it and it works. I can see exploring this kind of living situation in the future."

Montana sees herself splitting her time between Los Angeles and New York for a while.

For now, their living situation "feels natural and healthy for all three of us," Blakeney says.

When the women moved in together in February 2020, they were struggling. Three years later, their careers are flourishing.

"We could live separately and comfortably right now," Blakeney says. "But we love our living situation. It's an empowered choice. We are choosing to be here."