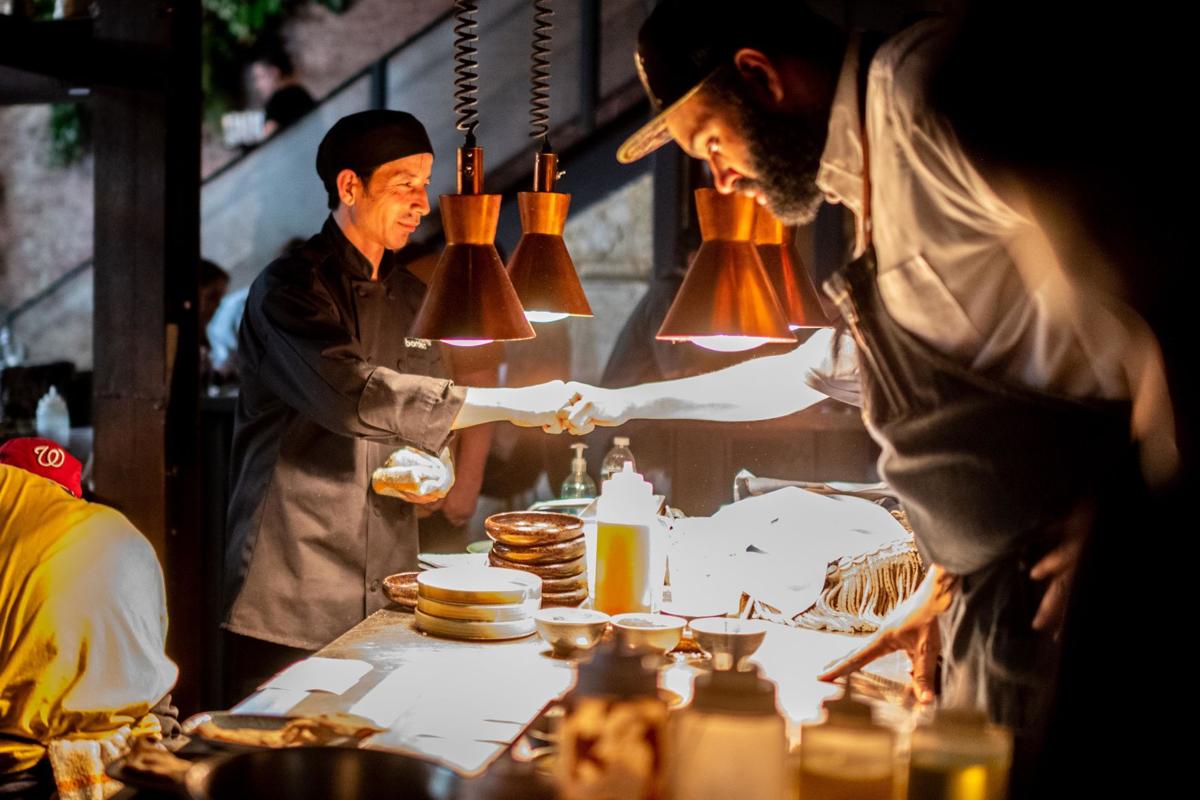 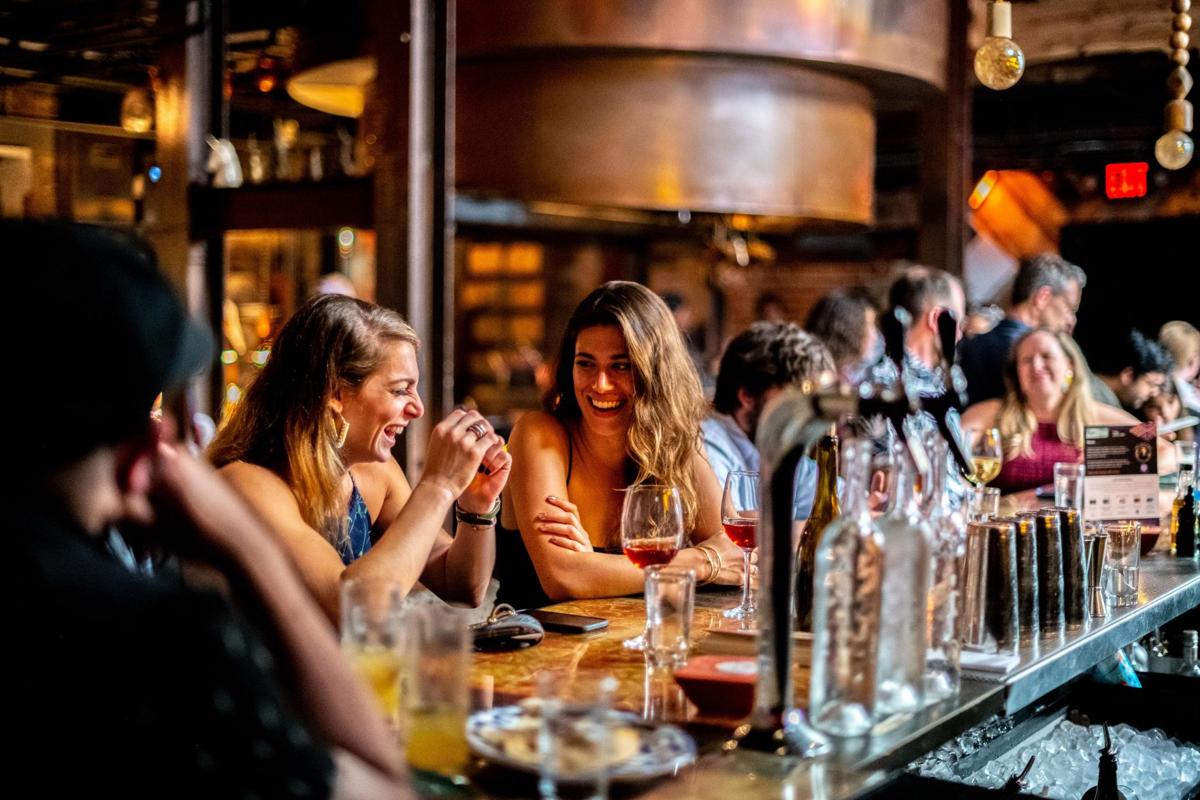 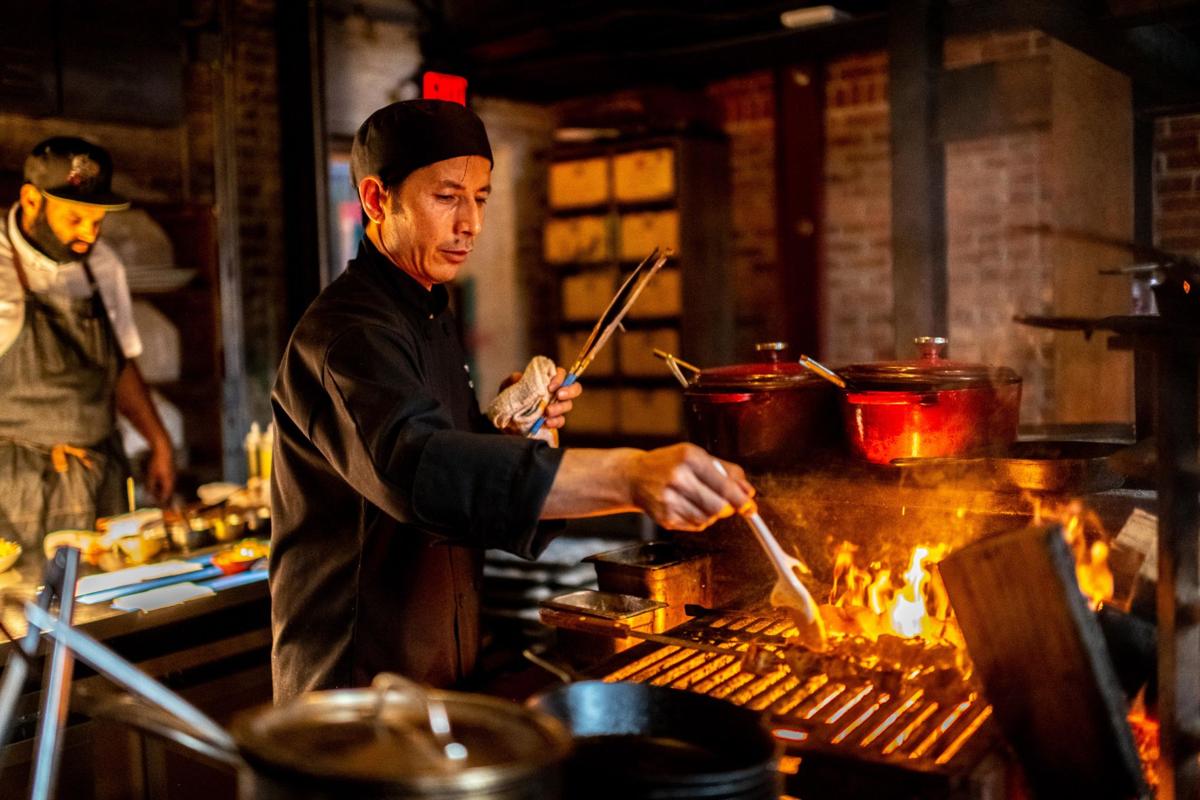 TABLES WITHOUT BORDERS: Chef Ahmad Nejat Ahmadollah, a refugee from Afghanistan, tends to kebabs at Maydan during a recent Tables Without Borders dinner. 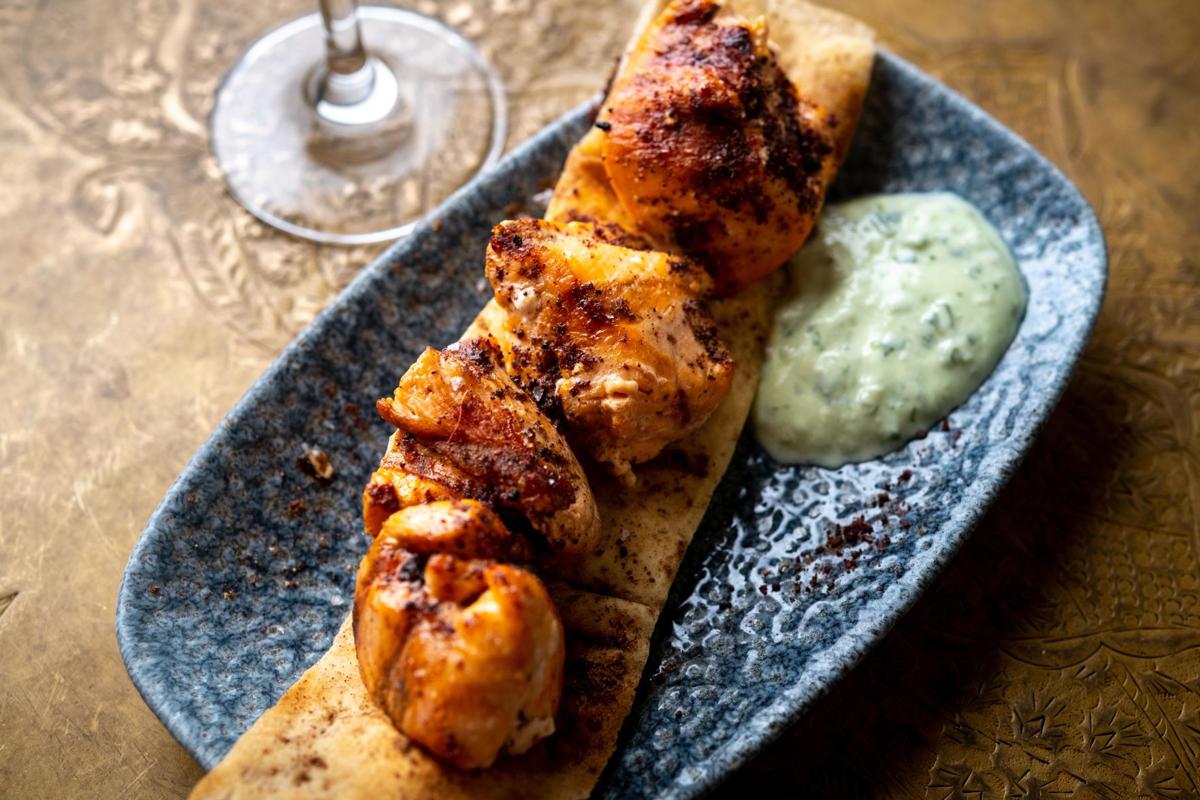 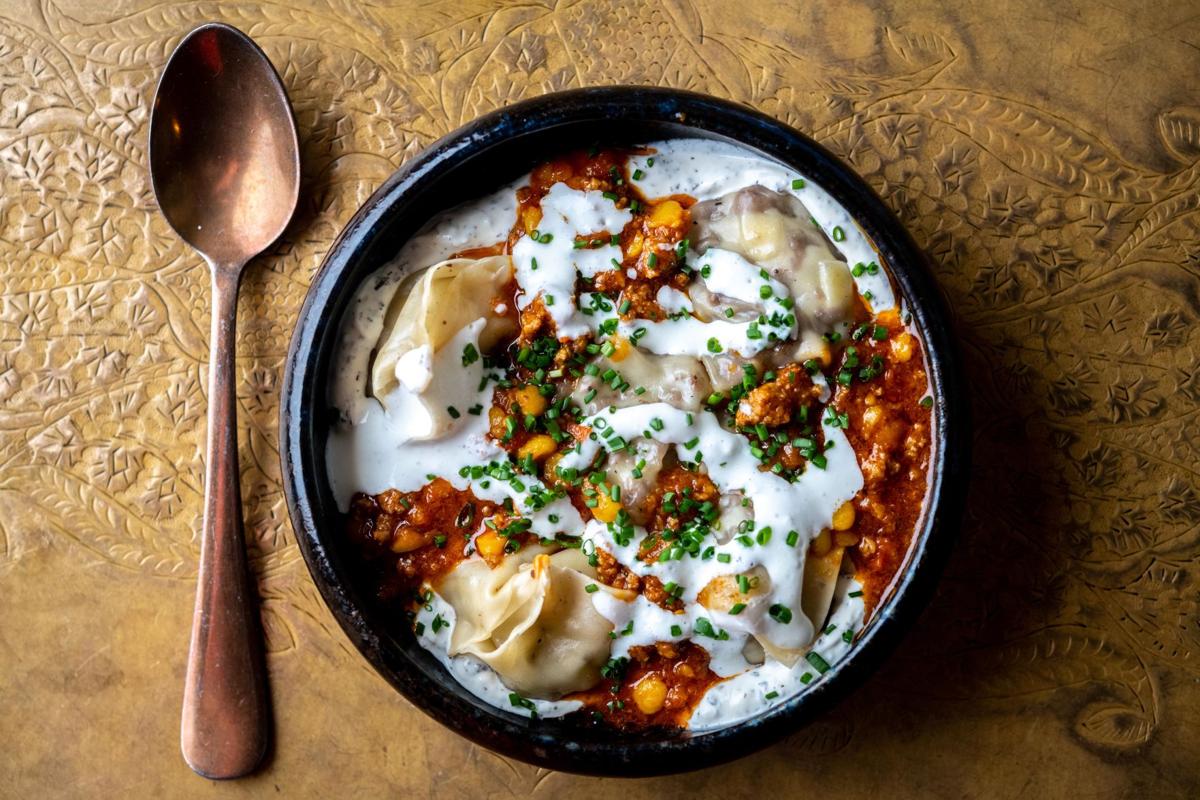 YOGURT AND BEEF: Beef dumplings with split pea korma, yogurt and mint made by chef Ahmad Nejat Ahmadollah at Maydan. 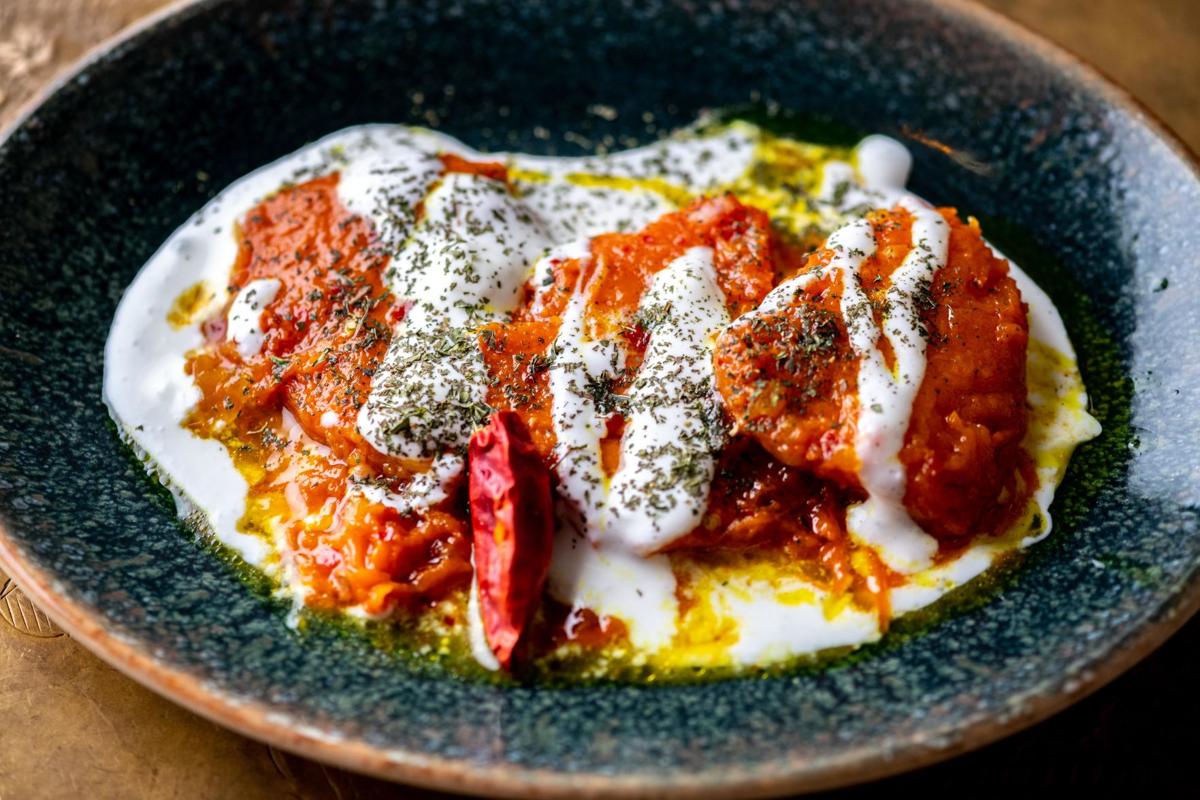 TABLES WITHOUT BORDERS: Chef Ahmad Nejat Ahmadollah, a refugee from Afghanistan, tends to kebabs at Maydan during a recent Tables Without Borders dinner.

YOGURT AND BEEF: Beef dumplings with split pea korma, yogurt and mint made by chef Ahmad Nejat Ahmadollah at Maydan.

NEW YORK - For someone about to host 18 people for dinner, Hannah Goldberg didn't seem nervous. But an intense, compact woman in Goldberg's gleaming Brooklyn kitchen barely looked up from the stove, occasionally adjusting a headscarf or dabbing her brow as she stirred a pot or arranged a salad platter.

The woman was an Iraqi immigrant named Noora, whose last name wasn't disclosed out of concern for her privacy and security. The meal featured beloved recipes she carried when she and her family fled Baghdad in 2016: Unripe green plums with salt as crudités. Ruby-colored beet salad with sun-dried black lime. Silky sheep's milk yogurt with bulgur and crushed walnuts. Fresh green fava beans with wild river mint.

And the buffet dinner was the latest sold-out event from Tanabel, the company Goldberg launched in 2017 to give refugee women "meaningful and empowering employment" while celebrating cherished cuisines of their homelands. For $100, guests get a delicious meal in culinary idioms rare even for omnivorous New York; cooks gain connections, confidence and - critically - financial rewards for a night's work. "We pay handsomely," said Goldberg, 40. "The end goal is stability for the cooks."

You've heard of kitchen-table politics? Welcome to the age of dining-room activism. Across the country, ventures such as Tanabel are using food as a tool to counter the Trump administration's anti-immigration policies. There are supper clubs and catering companies, co-ops and cooking classes, breaking-bread dinners and culinary tours. They might hire immigrants for kitchen jobs, pay them to share recipes or provide high-level culinary training.

The appetite for them is growing. "I call it culinary solidarity. People are giving a finger to the current administration by lifting their forks," said Kevin Jennings, president of Lower Manhattan's Tenement Museum, which spotlights America's urban immigrant history. "At this time of xenophobia, supporting these businesses is an explicitly political act, and these meals become acts of resistance to the current regime. Plus, the food is delicious."

"Culinary solidarity" also carries economic upsides. "Food entrepreneurship is one of the greatest and most proven roads to economic well-being for new Americans," said Ellen Beattie, senior director of program quality and innovation at the International Rescue Committee, which has connected hundreds of refugees with such food-focused enterprises as Tanabel.

By design or not, many of the new ventures are also inadvertently patching holes in a flooded refugee-aid system. "Resettlement agencies are massively understaffed and underfunded," said Gissou Nia, the human rights attorney who founded New York-based Refugees Welcome in 2017. "Where governments fail, people power and maybe corporate power find different solutions."

Inspired by dinners she attended in Europe, Nia's initiative provides "tool kits" to such companies as Facebook and Tumblr, where employees can break bread with refugees; immigrant-run catering companies often provide the food. "They're all there to learn about each other," Nia said. In Washington, a group of Instagram influencers hosted Refugees Welcome dinners at the restaurants Compass Rose and Lapis; the movement has spread to Canada, Britain, Sweden and Norway.

If you're hearing "movement" and thinking church suppers, you're looking at an old menu. For these culinary activists, food takes center stage. Cooking is often restaurant-quality, plating thoughtful, ingredients carefully chosen. "I went to too many congregation dinners where the food was brown and gray," said Tanabel's Goldberg, a Washington native and prizewinning chef whose résumé includes kitchen stints across Europe and consulting gigs in wine, cheese and food tech. "The food is primary. Of course, it's important that Tanabel cooks are refugees. But if the meals aren't memorable, we won't be successful."

Tanabel's refugee-prepared dinners have become such word-of-mouth sensations that they sell out months in advance. The Iraqi cook I met, Noora, came with serious kitchen cred: Her day job is prep at Danny Meyer's vaunted Financial District eatery Manhatta. "My initial attraction was Tanabel's menus," said Hayden Gutt, a 20-year-old clinical research coordinator who drove 40 miles from Westchester County, New York, to Brooklyn for Tanabel's Iraqi-themed June feast. "Now that I've met Hannah, I also have a great appreciation for the mission. It's a way to protest the travesties enacted by the current administration."

Food is also primary for Eat Offbeat, a Manhattan-based catering business where meals are "conceived, cooked and delivered by refugees," according to co-founder Manal Kahi, 34, an immigrant from Lebanon. "We want to create quality jobs for refugees, we want to build bridges with neighbors, and we want to introduce clients to underrepresented cuisines."

With its far-flung menu offerings, the company has become a smash, serving more than 120,000 meals since its 2015 debut, Kahi said. A typical Eat Offbeat meal might include an Iraqi sumac salad appetizer, a Sri Lankan tofu curry main and an Iranian baklava dessert, all reflecting the kitchen's kaleidoscope of cultures. An unlikely bump in bookings came from the Trump administration's 2017 travel ban targeting Muslim-majority countries; "sales doubled," Kahi said. Eat Offbeat, which launched with three trainees, now employs 30 people.

Culinary activism has even spawned its own restaurant. Behind a sleek black Brooklyn storefront is Emma's Torch, a bright, busy eatery whose menu showcases food by trainee chefs - all of whom are immigrants, refugees and/or human-trafficking survivors. Each dish gets named for its creator and their country of origin. On its current menu: Malado's salmon croquette from Mali; Niran's Iraqi kababsi with tomato sauce; Russian-inspired corn and crab salad by Ruslan.

Along with culinary training, ESL classes and job-interview prep, Emma's Torch offers huge dollops of positive reinforcement. "It's workforce development, but it's also about renewing pride, empowerment and ownership of job prospects," said Kerry Brodie, 29, the organization's founder and executive director. Students, who earn $15 per hour for a 40-hour workweek over 12 weeks, receive a Misen chef's knife and Emeril Lagasse chef's clogs as graduation gifts. Alums now work in such restaurants as Brooklyn's Dumbo House, Lafayette in SoHo and Loring Place in Manhattan's West Village. Emma's Torch has been such a hit that a second location opened in April inside a Brooklyn Public Library branch.

In Washington, a new initiative called Tables Without Borders placed refugee cooks in five restaurant kitchens for mid-June tasting dinners that sold out almost as soon as they were listed; A Rake's Progress, Little Sesame and Maydan were among the host eateries serving one-night-only menus spotlighting a guest chef's home cuisine. "It's culinary training, but in a way that gives refugees real-life experience with high-profile chefs," said Sam Sgroi, a co-founder and longtime refugee resettlement volunteer. "They might not get that opportunity otherwise." Sgroi and Sara Abdel-Rahim, his co-founder, hope to expand the program year-round.

Chef Ahmad Nejat Ahmadollah, a refugee from Afghanistan, cooked with the Maydan chefs, tending chicken kebabs on the restaurant's huge open hearth and serving them with Afghan spices and cilantro chutney. Other dishes on his menu: roasted pumpkin with yogurt sauce and mint; beef dumplings called mantu; and kabuli pulao, steamed riced with raisins, carrots and lamb.

Power dynamics - not just powerful flavors - are the fuel for League of Kitchens, which offers cooking classes and food tours led by immigrant women. Founded in 2014 by Washington native Lisa Gross, the business "flips the conventional relationships between immigrants and nonimmigrants," said Gross, 36, who studied literature at Yale and earned a master's degree in participatory public art from Tufts. "The immigrant becomes the expert, the host, the teacher. It's empowering for them to have someone pay $175 for a four-hour workshop."

This summer, League of Kitchens classes include workshops in Indian, Mexican, Argentine, Iraqi and Nepali cuisine; most take place in its instructors' home kitchens. "Since Trump, language around immigration and refugees has become hateful and dehumanizing," Gross said. "It's important to advance opportunities but even more critical to advance a different narrative."

Stories are also key ingredients at Sanctuary Kitchen in New Haven, Connecticut. Launched in 2017, the nonprofit group offers cooking classes, catering and culinary events - such as a sold-out "Taste of Ramadan" dinner in May - all led by resettled refugees and immigrants. "Food is a great tool for social and political change," said co-founder Sumiya Khan, 40, a registered dietitian. "It exemplifies shared humanity and shared traditions. And it breaks down walls when you're not familiar with the 'other.'" Sanctuary Kitchen now boasts a flextime talent pool of 40 refugees and immigrants, with a part-time catering staff of seven who earn "benefits and a livable wage," Khan said.

Sanctuary Kitchen graduates have even launched their own businesses. The organization "changed my life," said Aminah Al Saleh, an immigrant from Homs, Syria, who opened her own catering business after training at Sanctuary Kitchen in 2018. "When I share my food, I feel there is a good connection. I have made new friends and new customers." Entrepreneurship is "a great outcome," Khan said.

Back at the Tanabel dinner I attended, Noora, the refugee cook, finally took a step back from the stove as sated guests milled in Goldberg's long, lush backyard. Noora had been cooking since 10 a.m. Her husband, an engineer, had stopped by to cheer her on. She was beaming. "They like the food," she said softly. "I'm happy."