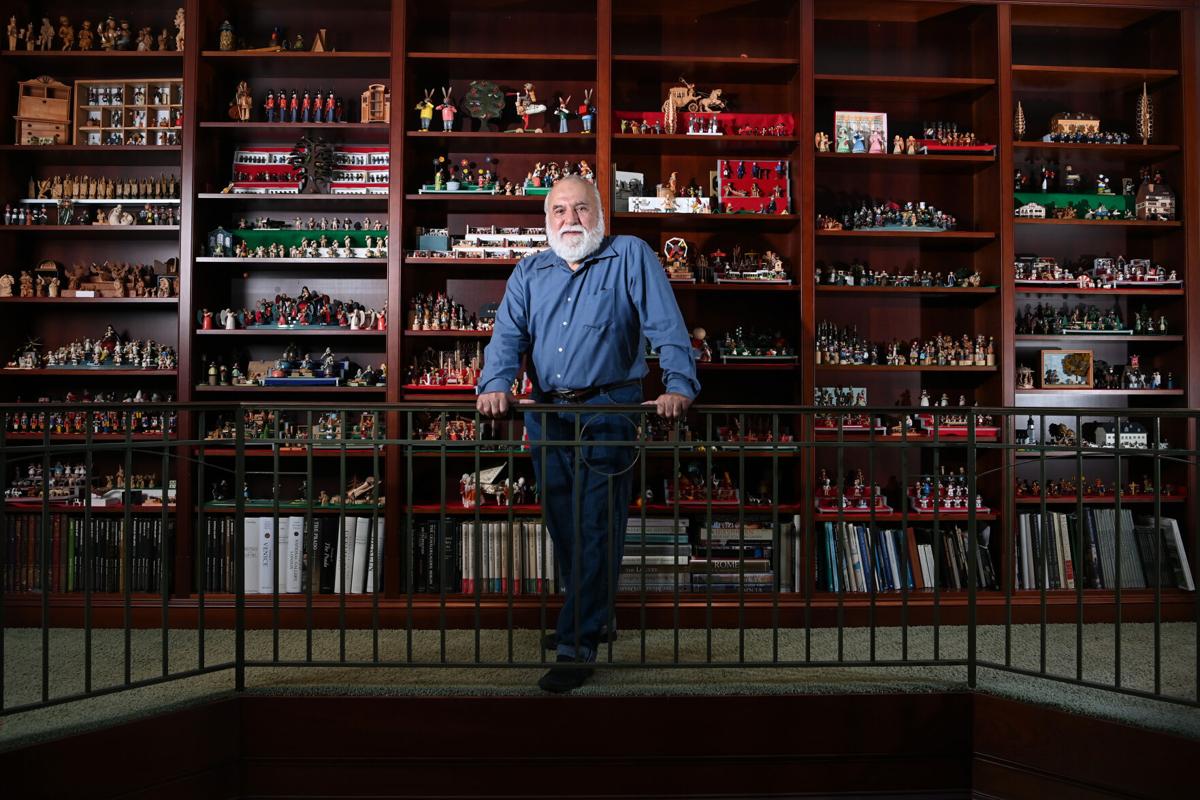 FLORES: Jorge Flores, 74, stands in front of a portion of his miniature collection at his home in Potomac, Maryland. Matt McClain/The Washington Post 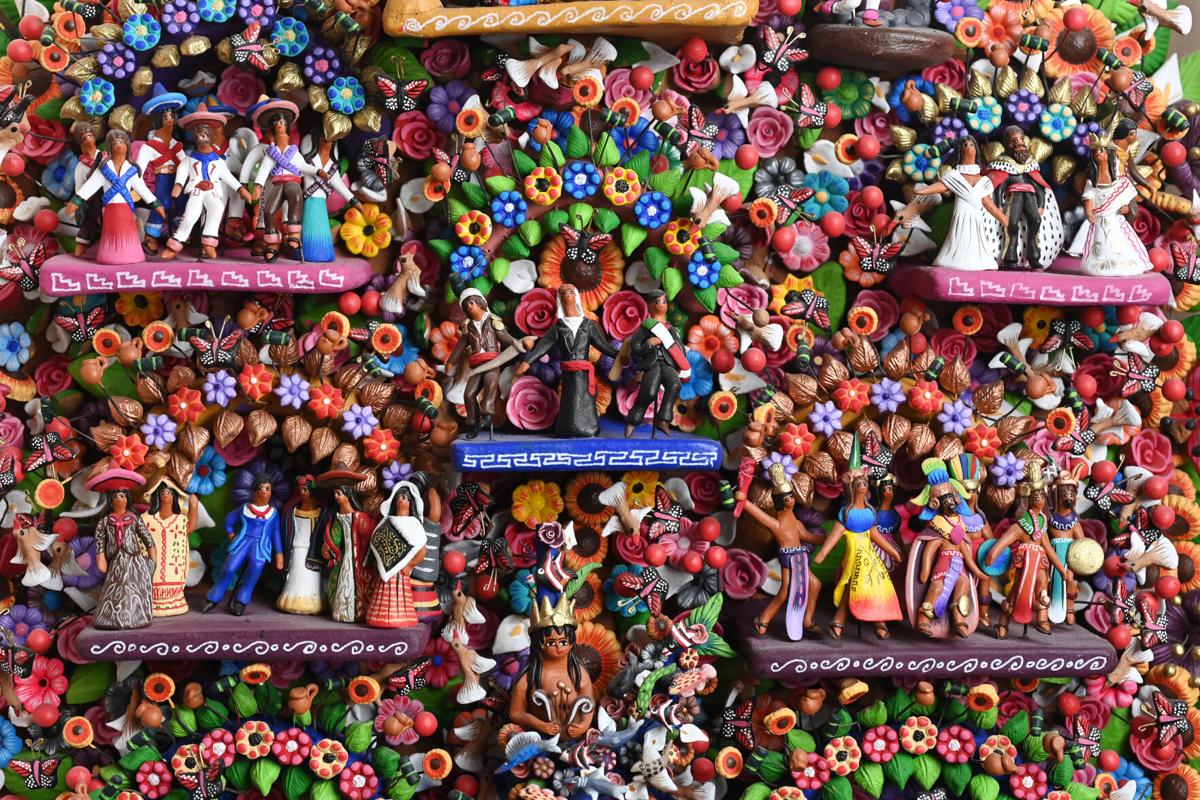 SMALL WONDER: Detail of a "Tree of Life" set that was made in Mexico. Matt McClain/The Washington Post 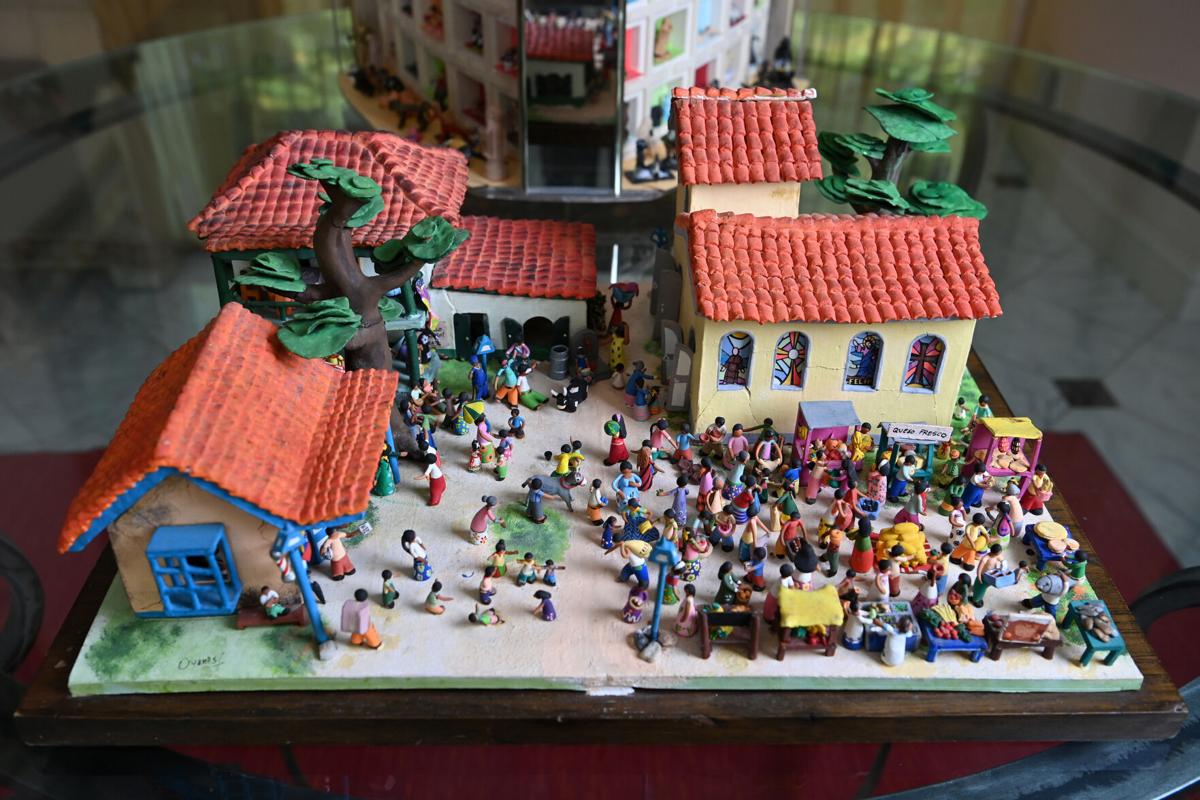 'THIS IS ART': A miniature tableau depicts a town scene in Venezuela. Matt McClain/The Washington Post

FLORES: Jorge Flores, 74, stands in front of a portion of his miniature collection at his home in Potomac, Maryland. Matt McClain/The Washington Post

SMALL WONDER: Detail of a "Tree of Life" set that was made in Mexico. Matt McClain/The Washington Post

'THIS IS ART': A miniature tableau depicts a town scene in Venezuela. Matt McClain/The Washington Post

It's Sunday in a typical village in Venezuela. The Mass in the cathedral is over and the market square is packed. There are fishmongers and queso fresco vendors and a newspaper hawker and kids playing hide-and-seek and other games, and, in the center of the commotion, a cow that's parked itself near the church door.

The figures are as small as Jorge Flores' eyeballs as he peers into the window of the barbershop, like Gulliver in the land of Lilliput. He points out an inch-high man getting a shave next to another tiny customer reading a newspaper. Then his eyes dart back out to the crowd, where he points to a girl in a ring-around-the-rosie circle who's tumbling to the ground after losing her grip in the chain of hands.

"This is a very funny moment the artist put into the scene," says Flores with an impish smile. "That's what miniatures are all about – the details and the craftsmanship and the charm. This is art. It doesn't have to be a Raphael to deliver a message of joy and fun."

The elaborate and exuberant set of nearly 200 pieces, molded from clay and hand-painted in vibrant colors, was made by a woman in a craft shop in Caracas more than 50 years ago. It's one of thousands of such miniatures from around the world displayed in the Potomac, Maryland, home of Flores, 74, who has spent a half-century amassing his collection.

There are strutting roosters from Portugal; a pearl from China handwritten with poetry; Navajo Kachinas dancing in feathered ceremonial regalia; trolls from Norway; a marimba band from Mexico whittled from toothpicks; bronze gods and cornhusk dolls from Nepal; model ships from Vietnam; an ebony Noah's Ark from Malawi; a half-inch Don Quixote twisted from a single strand of wire; minuscule food dishes from Thailand; a spotted cow from Germany licking its side with a tongue out of a Tex Avery cartoon; a sandalwood figurine from India of a Rajasthani woman in a traditional dress, with hidden pocket-drawers that reveal famous royal maharajahs and epic battle scenes with warriors and elephants; and a street peddler from the Salvadoran town of Ilobasco (when you lift the lids of her pottery, there are also "live" armadillos for sale).

A small world after all

Flores' vast mini-world fills 16 rooms. It's a staggering display of visually arresting objects that can be an overwhelming experience when you take the host-guided tour. Just when you think you've seen – or maybe hallucinated – it all, Flores ushers you into yet another room with shelves of more small-scale wonders waiting their turn in the spotlight. By his own estimation, there are between 80,000 and 100,000 figures in roughly 4,000 sets.

Incredible as it may seem after viewing his stash, Flores is a discriminating, finicky connoisseur who rejects most of what he comes across in his never-ending quest. He has strict criteria for what makes the cut: The piece has to be handmade and meet his standards of creativity and workmanship. Most important, it has to bring a smile to his face.

Most of the sets come with a backstory about the artist and how Flores tracked the piece down in a far-flung part of the globe. Take one of his favorites, a set of carved wooden figures from Mozambique. It depicts a real-life event during a deadly flood in 2000 when a pregnant woman escaped the rising waters by climbing a tree, where she gave birth. The set features the dramatic scene when she and her baby girl, Rosita, are rescued by helicopter.

"Every year on her birthday Rosita is in the newspapers with a new photo and story about her life," he told me. "They still remember her in Mozambique."

As with many of the countries represented in the collection, Mozambique is not just a place on a map for Flores. He worked on malaria vaccines with a clinic based there during his time as an infectious diseases expert with the National Institutes of Health.

In the last decade, his collection has more than doubled in size, and he has become a patron as well as a collector. He and his partner, Elizabeth, who accompanies him on search expeditions, have befriended many of the miniatures artists. One is the Jangid family of Jaipur, India, who come from a long line of traditional wood carvers. The exquisitely wrought figurine of the Rajasthani woman is one of many pieces he has commissioned from the family. For Flores, it's a way of not only adding to his stash but helping to financially support the practitioners of a dying art.

"They are poets," Flores says of the artists. "They enjoy the work they do. It brings out their soul and goes into every piece they make. They have a lot of originality and craftmanship, and they deserve to be known outside their villages."

It was a homely frog prince, tiny as a thumbnail, that first helped spark Flores' obsession. He bought the German-made, painted-wood piece for 70 cents at a shop in Cambridge, Mass., where he was a clinical-research fellow at Harvard Medical School in the early 1970s. His collection soon expanded after trips to Mexico, a destination for folk-art miniatures including fleas in traditional dress performing a hat dance.

It wasn't long before the completist streak of his miniature mania took hold. "I think you have to have the passion for collecting that is kind of an unnatural gene defect," he told me. "Collectors collect because they're curious and they want to bring things together and look at them all together. Let's say that I had the New York Yankees in little figurines handmade by a rural artist, and if I didn't have Mickey Mantle, it wouldn't be complete, right? You have to have everyone from the team."

His collection now includes 120 countries, with miniatures hotbeds like India, Mexico, Vietnam, Germany, Indonesia and Japan well represented. Recently he has been able to fill gaps by acquiring hand-stitched figurines depicting a crochety old couple from Montenegro and a set of the earliest Christian churches from Armenia.

A friend and colleague, Dave Keuler, has seen the collection twice. "It's an absolutely jaw-dropping display of artisanal mastery with pieces that reflect so many traditional cultures," says Keuler, a clinical psychologist from Silver Spring. "It captures so much of what's great about what it means to be a human being – that creativity and stick-to-it-ness and passion and desire to memorialize cultures."

An avid antiques collector, Keuler thinks the pieces deserve a wider audience. "It feels like a national treasure," he says, "and I hope it finds a place where it can be enjoyed by people. I hope it doesn't end up in boxes." Indeed, with his recent retirement after 32 years at NIH, Flores says he now wants to find space to open a miniatures museum in Montgomery County.

Recently, Flores acquired several prized sets that were custom-made for him by a Peruvian couple in Lima. The painstaking work took two years from commission to completion, and Flores says it was worth the wait. One is a set of the National Children's Symphony Orchestra of Venezuela conducted by Gustavo Dudamel. The artisan mistakenly put two batons in the hands of Dudamel instead of one. When Flores saw the pair of batons, he was delighted. "I won't dare to ever change that," he says, noting that it will give him a teachable moment if school groups ever visit his future museum: He will test the children's knowledge of classical music by asking them what's different about this conductor – aside from being very small.