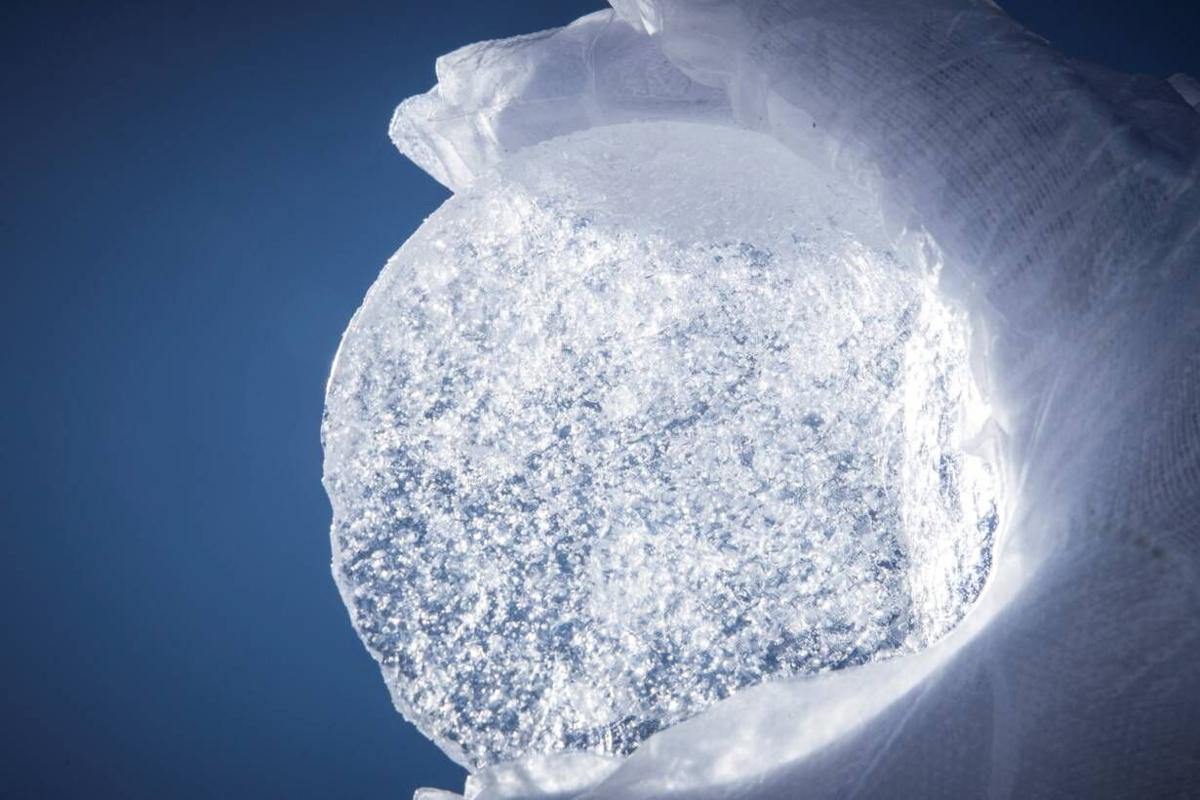 ICE CORE: A section of an ice core is pictured from an international mission to Monte Rosa in this June 2021 handout photo. Enrico Costa for Ca' Foscari University of Venice/Handout via Reuters 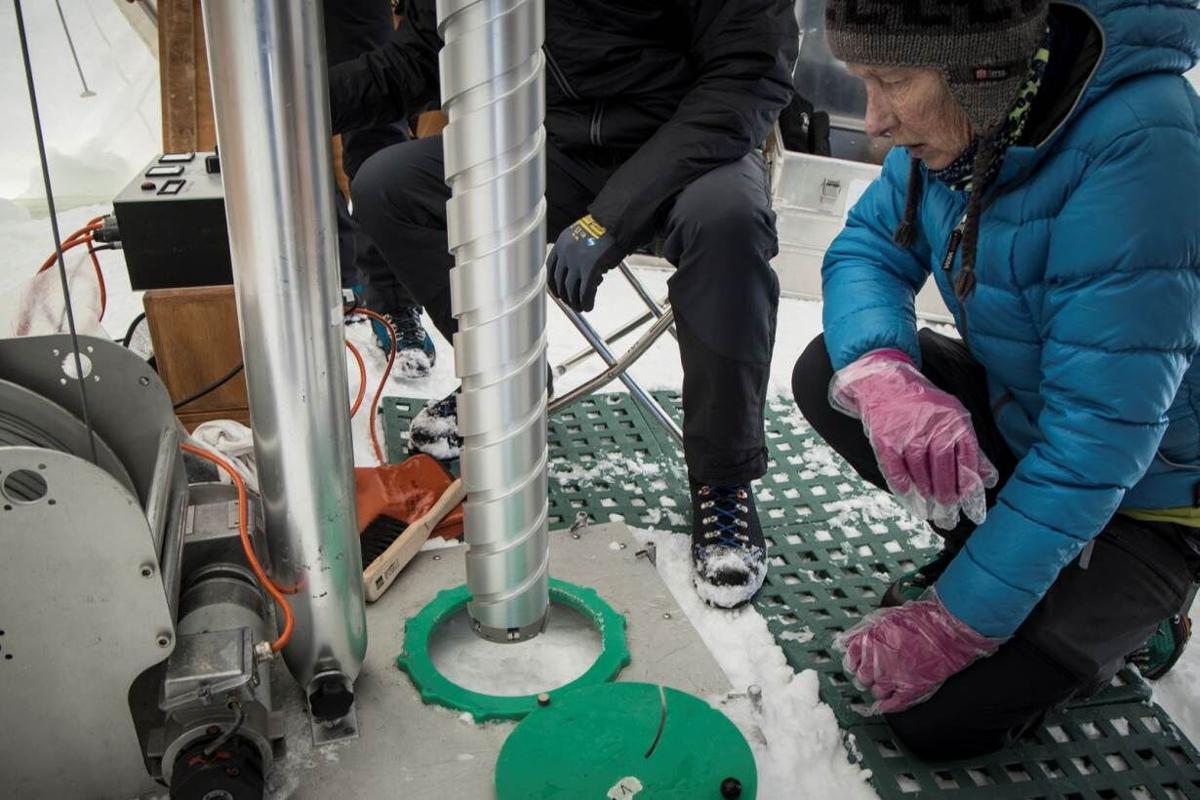 ICE MEMORY PROJECT: Margit Schwikowski is pictured as scientists from the Ice Memory project prepare to drill on Monte Rosa in this June 2021 handout photo. Enrico Costa for Ca' Foscari University of Venice/Handout via Reuters 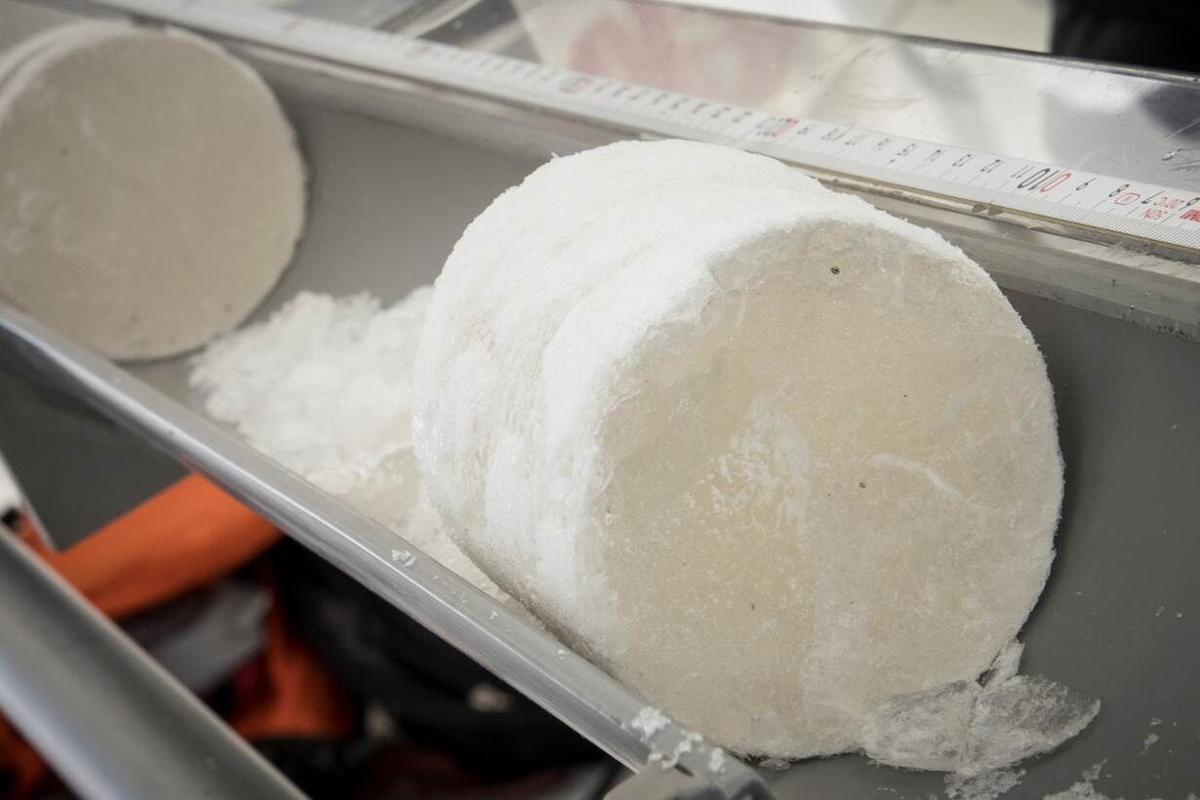 MISSION TO MONTE ROSA: A section of an ice core is pictured from an international mission to Monte Rosa in this June 2021 handout photo. Enrico Costa for Ca' Foscari University of Venice/Handout via Reuters

ICE CORE: A section of an ice core is pictured from an international mission to Monte Rosa in this June 2021 handout photo. Enrico Costa for Ca' Foscari University of Venice/Handout via Reuters

ICE MEMORY PROJECT: Margit Schwikowski is pictured as scientists from the Ice Memory project prepare to drill on Monte Rosa in this June 2021 handout photo. Enrico Costa for Ca' Foscari University of Venice/Handout via Reuters

MISSION TO MONTE ROSA: A section of an ice core is pictured from an international mission to Monte Rosa in this June 2021 handout photo. Enrico Costa for Ca' Foscari University of Venice/Handout via Reuters

Scientists are racing to collect ice cores – along with long-frozen records they hold of climate cycles – as global warming melts glaciers and ice sheets. Some say they are running out of time. And, in some cases, it's already too late.

In 2018, they had scouted the site by helicopter and drilled a shallow test core. The core was in good shape, said Schwikowski: It had well-preserved atmospheric gases and chemical evidence of past climates, and ground-penetrating radar showed a deep glacier. Not all glaciers in the Alps preserve both summer and winter snowfall; if all went as planned, these cores would have been the oldest to date that did, she said.

But in the two years it took for the scientists to return with a full drilling set-up, some of the information that had been trapped in the ice had vanished. Freeze-thaw cycles had created icy layers and meltwater pools throughout the glacier, what another team member described as a water-laden sponge, rendering the core useless for basic climate science.

The sudden deterioration "tells us exactly how sensitive these glaciers are," said Schwikowski, head of the analytical chemistry group at the Paul Scherrer Institute in Villigen, Switzerland. "We were just two years too late."

The mission on Grand Combin underscores the major challenge scientists face today in collecting ice cores: Some glaciers are disappearing faster than expected. The realization is prompting renewed urgency, causing those who specialize in harvesting ice cores to accelerate missions, rethink where to target next and expand storage capacity.

Almost all of the world's glaciers are shrinking, according to the United Nations. In its most comprehensive climate report to date, published in August, the UN concluded that "human influence is very likely the main driver of the near-universal retreat of glaciers globally since the 1990s." The report also said that without immediate, large-scale action, the average global temperature will reach or exceed 1.5 degrees Celsius above the preindustrial temperature average within 20 years.

The pace at which glaciers are losing mass is also increasing. A study published in April in the science journal Nature found glaciers lost 227 gigatons of ice annually from 2000 to 2004, but that increased to an average of 298 gigatons a year after 2015. A gigaton is the equivalent of 1 billion metric tons. One gigaton of ice would fill New York City's Central Park and stand 341 meters (1,119 feet) high.

About 10% of the land area on earth is currently covered with glacial ice, according to the National Snow and Ice Data Center in Boulder, Colorado.

If a glacier is melting and no longer accumulating snow, it means it also isn't capturing atmospheric gases from today for scientists to study in the future.

Two years ago, the south peak of Sweden's Kebnekaise mountain lost its designation as the country's highest point after a third of its summit glacier melted.

For Schwikowski, the disappearance of glaciers isn't just a professional blow; it's an emotional hit, too. "The mountains look different without them, barren," she said. In the Alps, the mountains without glaciers are "absolutely frightening."

Last September, Schwikowski stood bundled in snow gear as wet cylinders of ice were winched out of the boreholes on Grand Combin. The wetness surprised her, she said. Frigid meltwater drained from ice core pieces that should have been solid. And the core, which should have been translucent, had sections that were perfectly clear.

Ice cores like those from Grand Combin have helped scientists illustrate humanity's impact on earth's climate by providing a record of greenhouse gases dating back well before industrialization. The ice preserves tiny air bubbles – direct evidence of past atmospheres. Ice also captures air pollutants, pollen and other temperature and precipitation measures in a single archive, all on the same time scale, sometimes at the resolution of individual seasons.

Another member of the Grand Combin expedition, Italian climate scientist Carlo Barbante, said the speed at which the ice on the Alpine massif had melted in the last few years was "much higher than it was before." Finding the wet cores was a "complete shock," he said.

As a result, Barbante and other scientists – including Schwikowski – sped up plans to extract a core from the Colle Gnifetti glacier on the summit of the Alps' Monte Rosa, a few hundred meters higher than Grand Combin. In June, several months earlier than originally scheduled, they launched. The two cores they drilled were of good quality, Barbante said.

Barbante said he is also hoping to organize a trip to Mount Kilimanjaro, Africa's highest mountain and the only possible ice core site left on the continent, next year or the year after. One study cited in the recent UN report calculated that present-day warming has already set in motion melting that will eliminate all glaciers on the mountain by 2060.

A 2009 discovery by American scientist Douglas Hardy of the mummified remains of a 19th century pig on one of the highest points of the mountain's glaciers suggests some of the climate history the scientists are hoping to retrieve is already gone. "The implication of that is that we've lost the last 200 years' worth of recorded time," said Hardy.

Barbante and Schwikowski are part of a scientist-led group called Ice Memory that is trying to build an archive of ice cores from glaciers around the world. Ice Memory is endorsed by the UN's main cultural agency, the United Nations Educational, Scientific and Cultural Organization, or UNESCO.

So far they have drilled in Europe, Bolivia and Russia. The cores are temporarily being stored in Europe, but the plan is to ship them to Antarctica for long-term storage because the site wouldn't depend on power, which could suffer an outage.

"A hundred years from now, when the Alpine glaciers will be completely disappeared, we will have the samples" for future generations of scientists, said Barbante.

Beyond greenhouse gases, scientists say they may be able to use ice cores to study the DNA of ancient bacteria and viruses that could reemerge as the world warms. Frozen insects and plant pollen could also reveal histories of the world's forests and their fire cycles.

Another team of scientists, whose findings were published in July in scientific journal Microbiome, found viruses nearly 15,000 years old in two ice core samples taken from the Tibetan Plateau in China. The findings identified genetic codes for 33 viruses, at least 28 of which were new to scientists.

That team of scientists included U.S.-based ice core paleoclimatologists Lonnie Thompson and Ellen Mosley-Thompson, who are husband and wife.

Lonnie Thompson said the speed at which ice is disappearing has driven plans to expand his ice core storage facilities at Ohio State University, which he began fundraising for last year. He hopes to raise $7 million. So far he has raised about $475,000 through donations and pledges, according to the school's Byrd Polar and Climate Research Center. The renovation will double the facility's storage capacity to more than 13,550 meters of ice cores.

Some of the cores Thompson and his team have collected are the only remaining ice from some glaciers. Two of the six ice core sites on Kilimanjaro in Africa that his team drilled back in 2000 have disappeared. So have sites they drilled in 2010 in Papua, Indonesia. Others will likely be gone within 50 years, said Thompson.

In some cases, lakes formed on the glaciers' surfaces as the ice melted, a red flag that indicated melting could be faster than models previously predicted. He said it was a wake-up call that cores needed to be harvested as soon as possible.

"Ice has a wonderful archive of not only the climate, but also the forcings of climate," the major causes of climate change, Thompson said. "Those histories are at risk as the earth warms and the glaciers retreat."