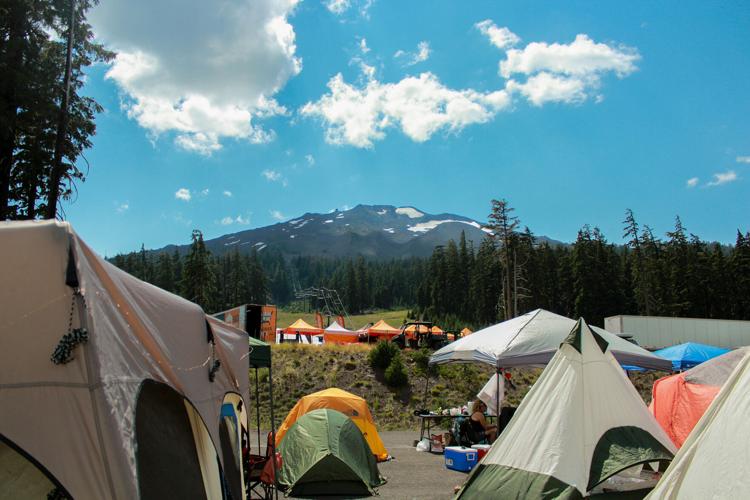 MOUNT BACHELOR: Mount Bachelor in the distance of the campsites during the Oregon Trail Ragnar. Courtney Beesch/The Washington Post 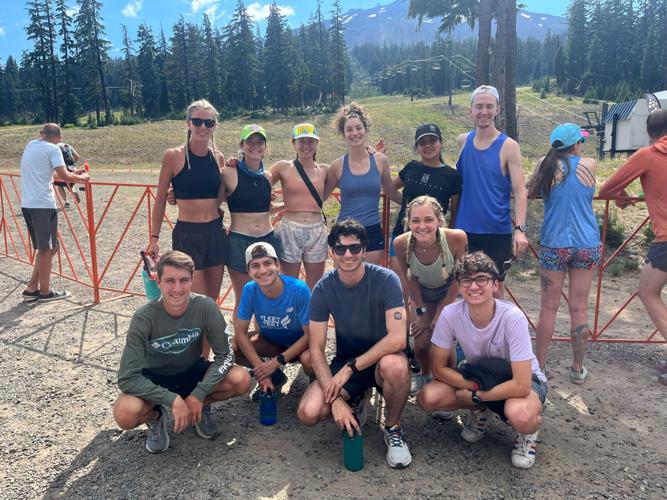 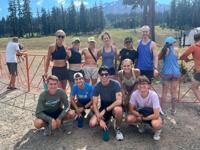 READY TO RUN: Our two teams pose for a photo by the transition point before the race. Courtney Beesch/The Washington Post 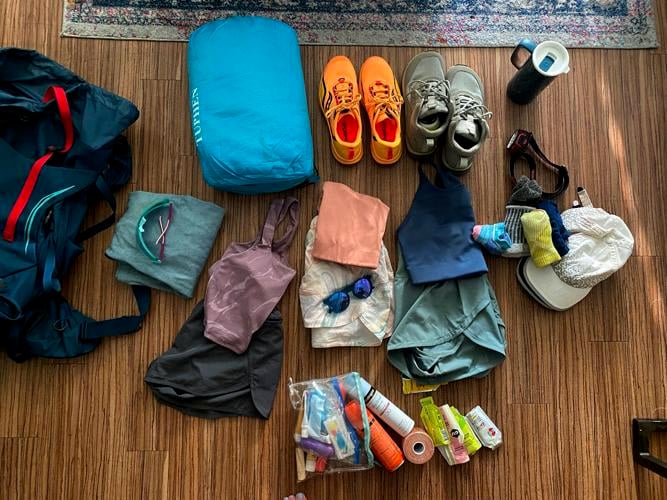 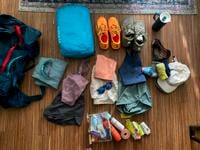 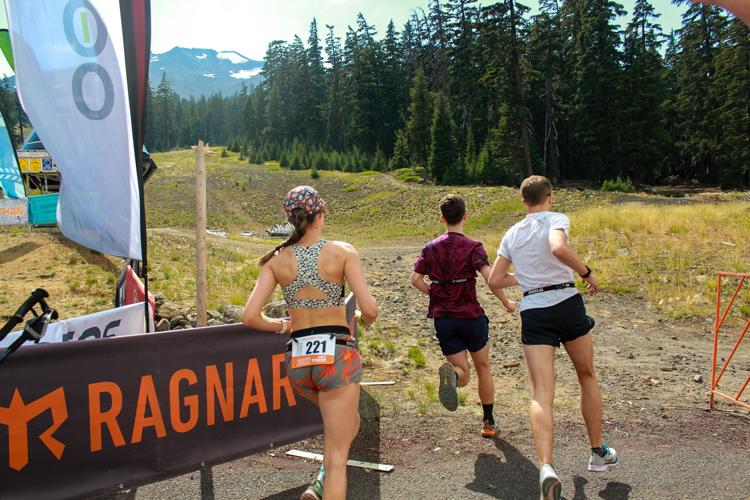 MOUNT BACHELOR: Mount Bachelor in the distance of the campsites during the Oregon Trail Ragnar. Courtney Beesch/The Washington Post

READY TO RUN: Our two teams pose for a photo by the transition point before the race. Courtney Beesch/The Washington Post

If you're looking for a run that's more intense than a 5k, more team-oriented than a marathon, and more scenic than speedy, the overnight trail relay might be for you.

It combines the rocky terrain and steep climbs of a trail run with the camaraderie and mild chaos of a relay race – mixed with the outlandish fun of an adult summer camp.

We recently completed a trail relay on Mt. Bachelor in Oregon, hosted by the Ragnar relay series. Our team, Nut Rack City, won the race in just over 21 hours, and the final team crossed the finish line in just over 45 hours.

As most of us are typically road runners, we were woefully unprepared for the challenges of the terrain, the darkness and the elevation. If you're braving a trail relay for the first time, this guide will help you learn from our mistakes.

How does a trail relay work?

When you arrive, you'll set up camp with all the other teams at the base of the mountain or trailhead, near where you'll start and finish each leg of the race.

Trail relays are composed of three loops. If a runner drops out or something goes wrong, some runners may repeat the same loop more than once.

Teams are assigned a start-time based on the average pace of their team, with the fastest teams starting later in the day. The race doesn't stop until it's over, so plan to do at least some of your running in the middle of the night.

In our 120-mile race, for instance, we fielded a team of eight runners expected to run a total of about 15 miles each. That 15 miles was broken down across three loops - 3.3 miles, 4.6 miles and 7.2 miles - and, at our pace, each runner got about five hours of rest before being called on to run again.

Between legs, runners are resting, eating and trying to recover. There's usually enough time to try to get a few hours of shut-eye, but the adrenaline might keep you up. Use your downtime to stretch, foam roll, eat something and hydrate. For entertainment, we brought books, a deck of cards and a journal for each runner to document their experience on their leg after they returned.

Winners are determined by which team finishes with the shortest overall time. Our team finished in 21 hours, 1 minute and 41 seconds, winning us the overall race.

For the Ragnar relay series teams of eight complete a 100+ mile race, over roughly a 48-hour period, on trails ranging from the Appalachians to Zion. Another popular relay is the Hood to Coast, one of the largest and longest-running relay races, where teams as big as 12 embark on a 200-mile adventure through Oregon's mountains, forests and beaches. You can also find one-day relay races, which accept teams of four to six.

Our race entry fee was just over $1,300, split eight ways. Travel fees varied depending on where each member of the team lived. We made plans to stay with a friend in Portland the nights before and after the race to save on costs.

No matter what team you bring, you'll leave the race as close friends. (Two days of communal suffering from exhaustion, sleep deprivation, rolled ankles and inside jokes will do that.)

The best thing about trail relays are the people who run them. You don't have to be a decorated athlete, trail expert or Strava celebrity to start the climb. However, it's definitely helpful to have some teammates who are willing to tack on more mileage. If a teammate gets injured, you'll need a backup plan for who on the team might be able to run extra legs. On our team, we ended up shifting the order around after multiple rolled ankles. (Bring a good headlamp!)

If you browse the race results of any Ragnar, you'll be met with a slew of creative running puns. We joined the ranks of Worst Pace Scenario, Long Distance Relaytionship and Not Fast Just Furious. Also on the list: Running on Empty, Don't Go Chaffin Waterfalls, Quad Bless America, Agony of Da Feet, Cirque Du Sore Legs, Between a Walk and a Hard Pace and a tartan skirt crew known as Kill! or be Kilt!

You've collected a group of friends, come up with a witty name, found a location and picked a race date. Now it's time to train.

Running is a full-body sport and adding a mountain into the equation changes the challenge entirely. Lift weights, bike, do yoga - pick the cross training that makes you feel best and incorporate that into your training. Your quads, glutes and lower back will thank you after the race.

The incline is enough to humble even the fastest of road racers. And your training should include running on different terrains and hiking or climbing those that you can't.

During the Oregon Ragnar, parts of the uphill were so steep that running wasn't any faster than hiking, and the downhill required a careful dance to keep your feet under your body. At one point on the downhill, an older man flitted past me with the grace of a billy goat and gleefully chimed, "This is so technical!"

To prepare yourself for the cadence of the relay, consider splitting training runs into a morning run, evening run and then a third run the following morning.

Be prepared for it to be as mentally taxing as it is physically. During the race, You'll need to run, rest, refuel, repeat. At least one of your runs is going to be overnight, and assuming you don't have immediate-sleep-anywhere superpowers, you won't be getting much rest.

Your nonnegotiable items include food, clothing and a tent. You'll sleep in a tent, or under the stars, if you're lucky enough to get any sleep at all.

Most teams recommend a 10-by-10 foot tent for eight people. If you're looking for roomier accommodations, Ragnar trail races offer "Glamping" rentals for $1,560. Each runner should bring their own sleeping bag and sleeping pad, but if you're worried about floor space, you can store duffel bags and coolers outside on a tarp.

For our race, some of the tents featured foldout tables hosting pancake griddles, overlapping strands of fairy lights and even inflatable yard decorations anchored by buckets of White Claw.

Bring at least two headlamps for visibility on the trail at night. Ragnar requires a minimum brightness of 70 lumens - and trust us, with uneven terrain and narrow passes, you'll want it.

Consider what food or fuel makes you feel energized before a run. The easiest option for food is to stick to non-refrigerated, easily-digestible snacks that can feed a group. We made a grocery store stop for bread loaves, peanut butter, pretzels, bananas, protein bars and Gatorade.

Your race-day wardrobe will depend on the weather. Wear trail running shoes if you have them or hiking boots if you plan on walking. Your local outdoor or running store can help you pick the best fit, but shoes with thicker tread on the bottom will help you safely navigate the terrain.

Bring plenty of layers, assume it gets colder at night than you think, and bring enough undergarments to swap between each leg. Some people like wearing flip-flops to give their feet a rest between running. Packing tip: Bring three separate running outfits in plastic bags. You'll want the bags to isolate dirty clothes later.

Outside of these basics, you might also want to bring foam or stick rollers for recovering between legs, a pouch to carry your phone, cameras, running headphones, sunglasses and hats. While you are free to bring a book or deck of cards to pass time, Ragnar trail camps often coordinate group activities too. Our race included a bonfire with s'mores, group yoga sessions and movie screenings overnight (including a 2 a.m. showing of "Indiana Jones and the Last Crusade").

What not to bring

The race will supply water, so bring a refillable bottle, but don't worry about buying jugs or 36-packs. There will also be coffee, hot chocolate, tea and small freebie snacks from vendors. There are port-a-potties on-site, but bring a roll of toilet paper in case they run out.

There are no portable toilets on the trails. During our race, a prominent sign at the transition point read: "Please don't poop in the woods unless you have to."

Around the 24-hour mark, race organizers will notify teams that are at risk of not finishing in the allotted time limit.

When your final runner takes off, gather your team and make plans to head to the finish line. Ragnar encourages your entire team to do the last few meters with your anchor, so you can finish as a whole team while everyone cheers. Cherish this moment, you've just spent double-digit hours trekking more than a hundred miles together.