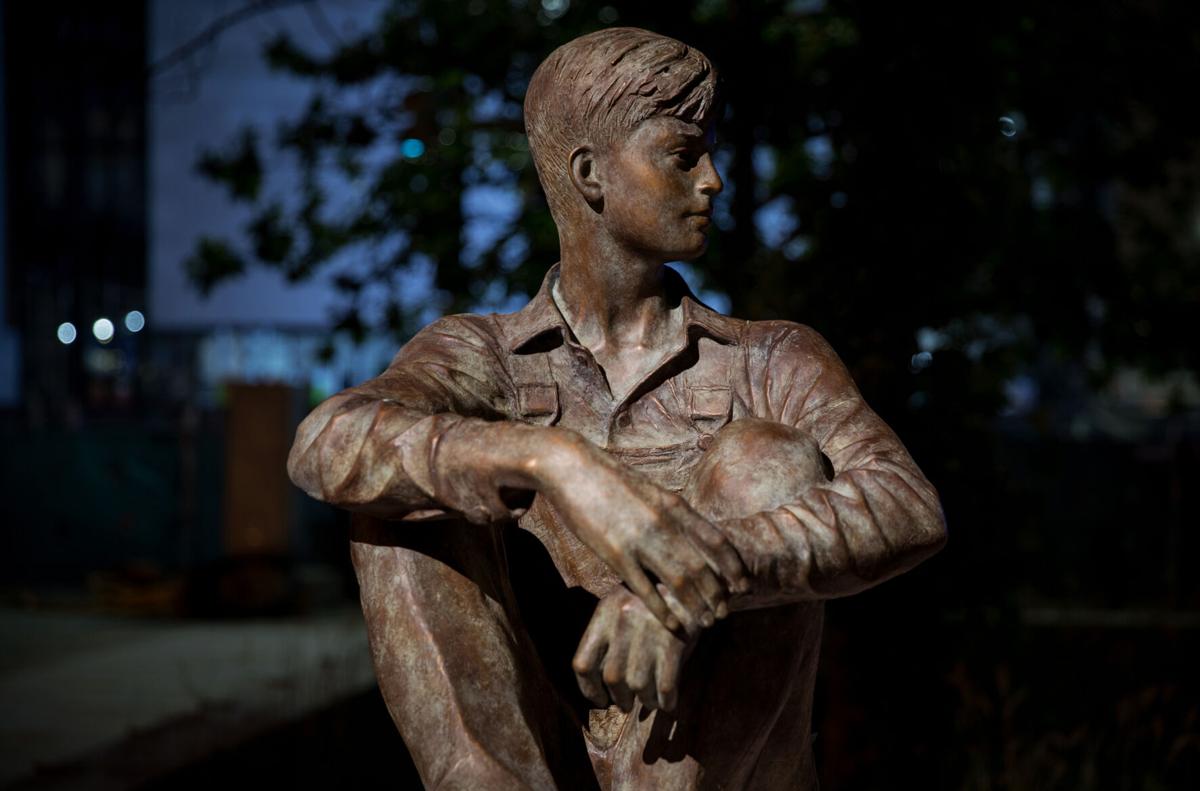 A DREAMER: A small, life-size statue of Dwight D. Eisenhower as a boy at the new Eisenhower memorial. Evelyn Hockstein/For The Washington Post 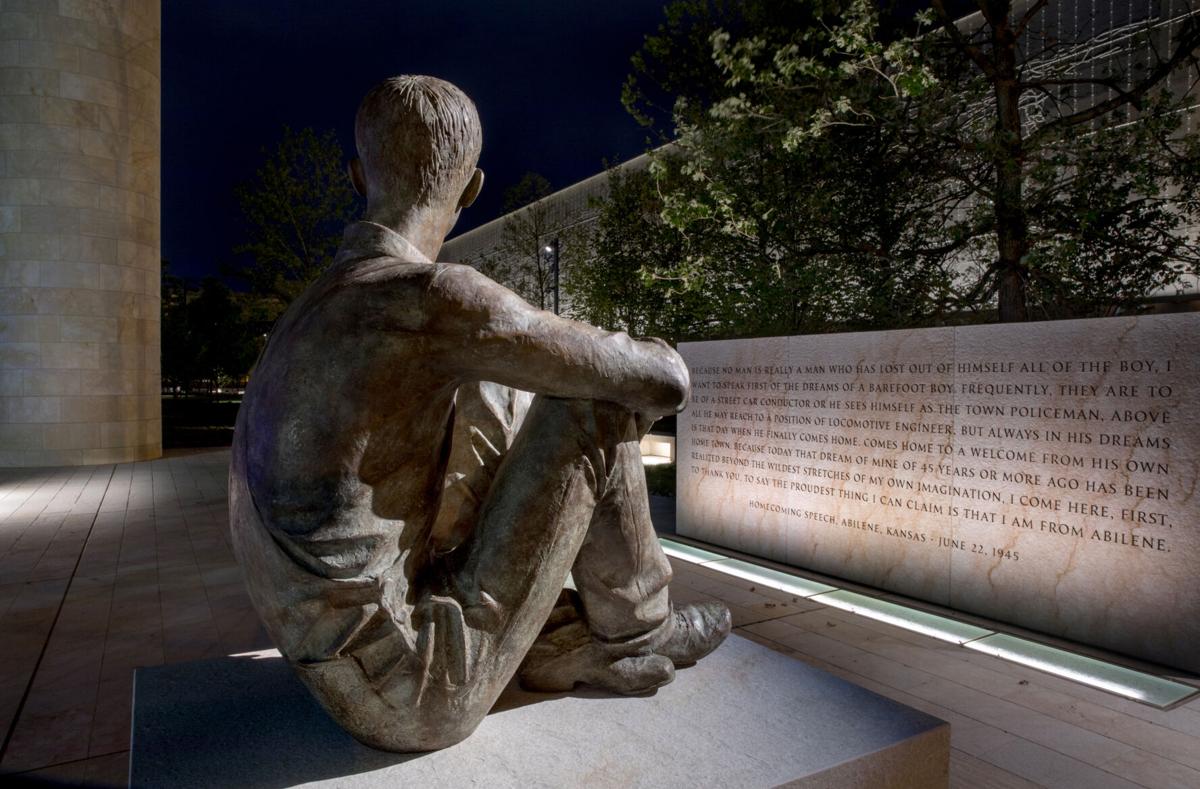 A SEGUE: A statue of a young Dwight D. Eishenhower at the soon to be opened Eisenhower Memorial, designed by world-renowned architect Frank Gehry, in Washington D.C. Evelyn Hockstein/For The Washington Post 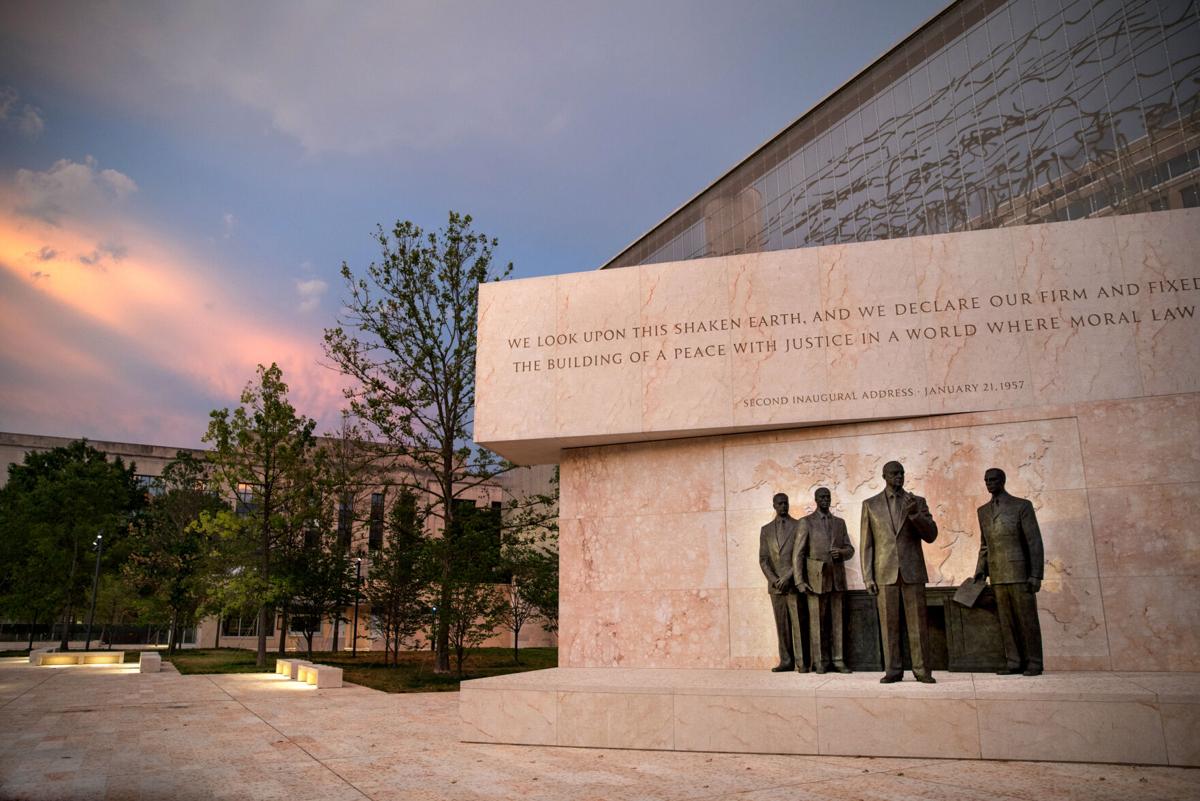 A VISION: The memorial to Dwight D. Eisenhower was authorized by Congress in 1999, when Bill Clinton was president. Evelyn Hockstein/For The Washington Post 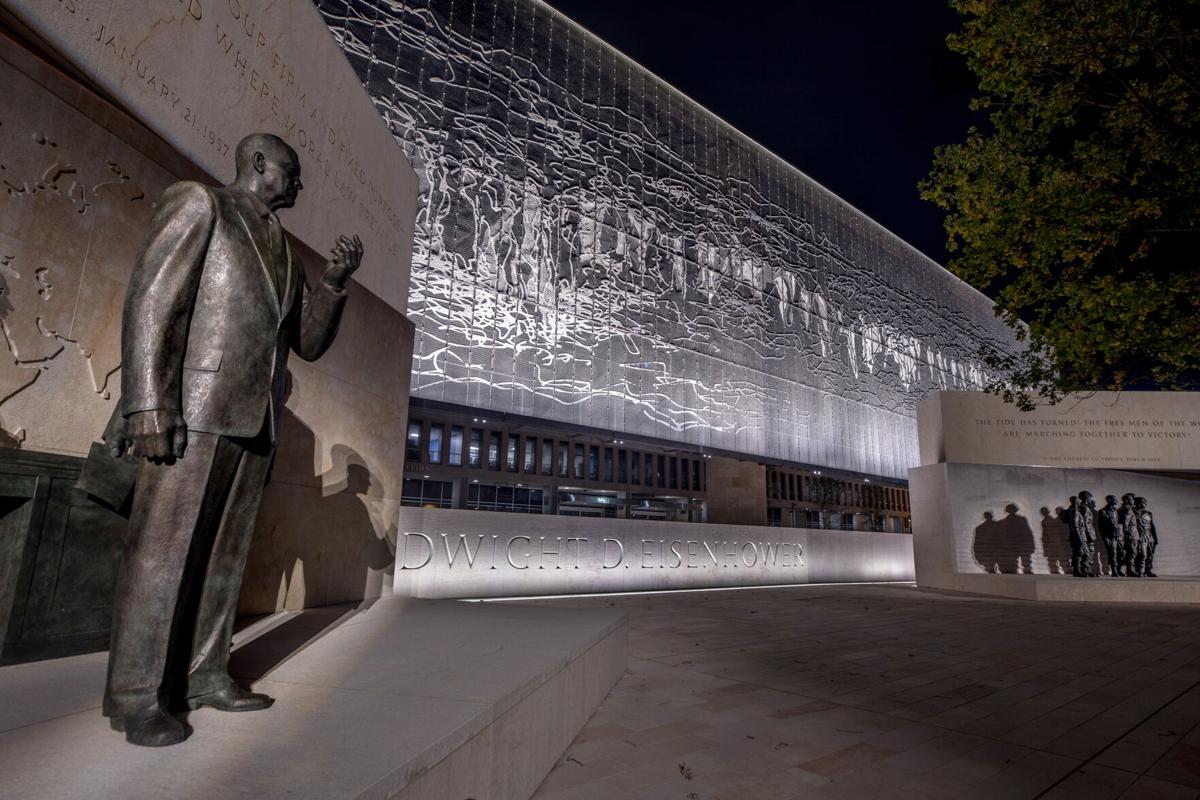 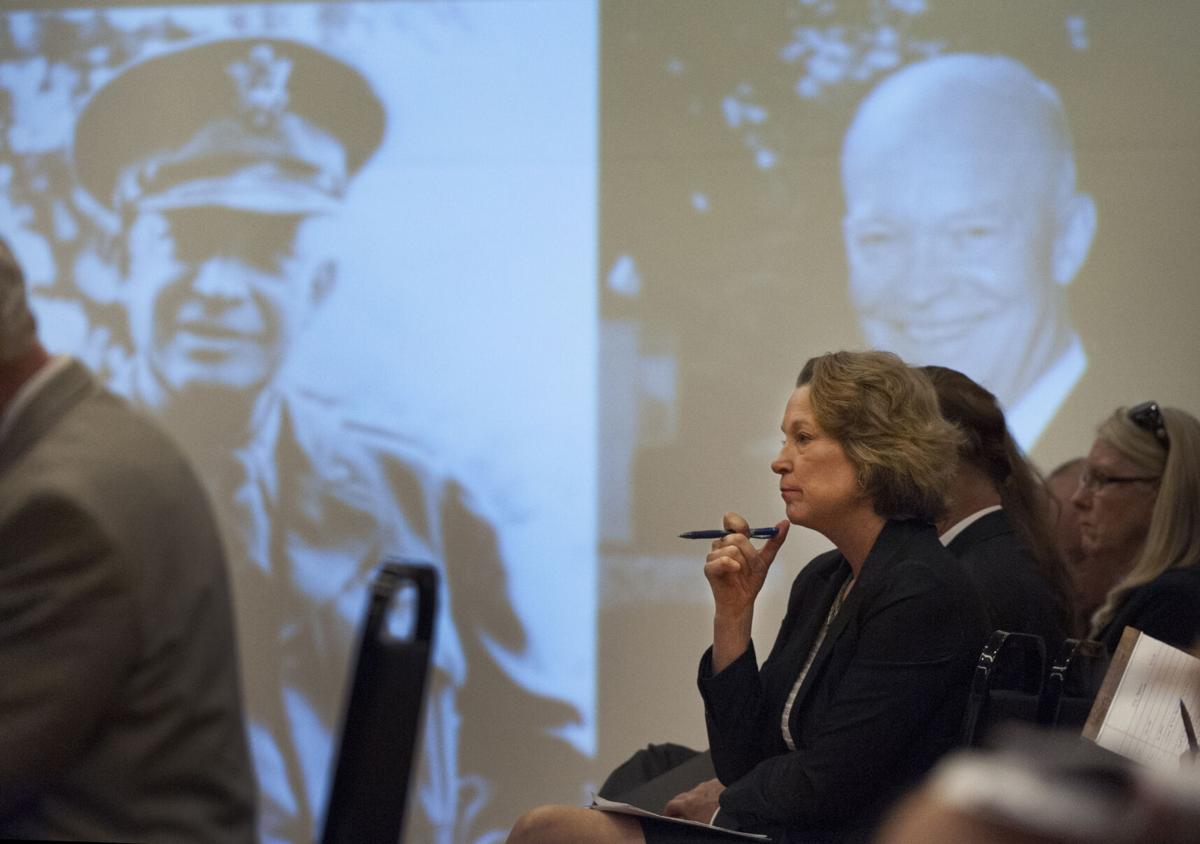 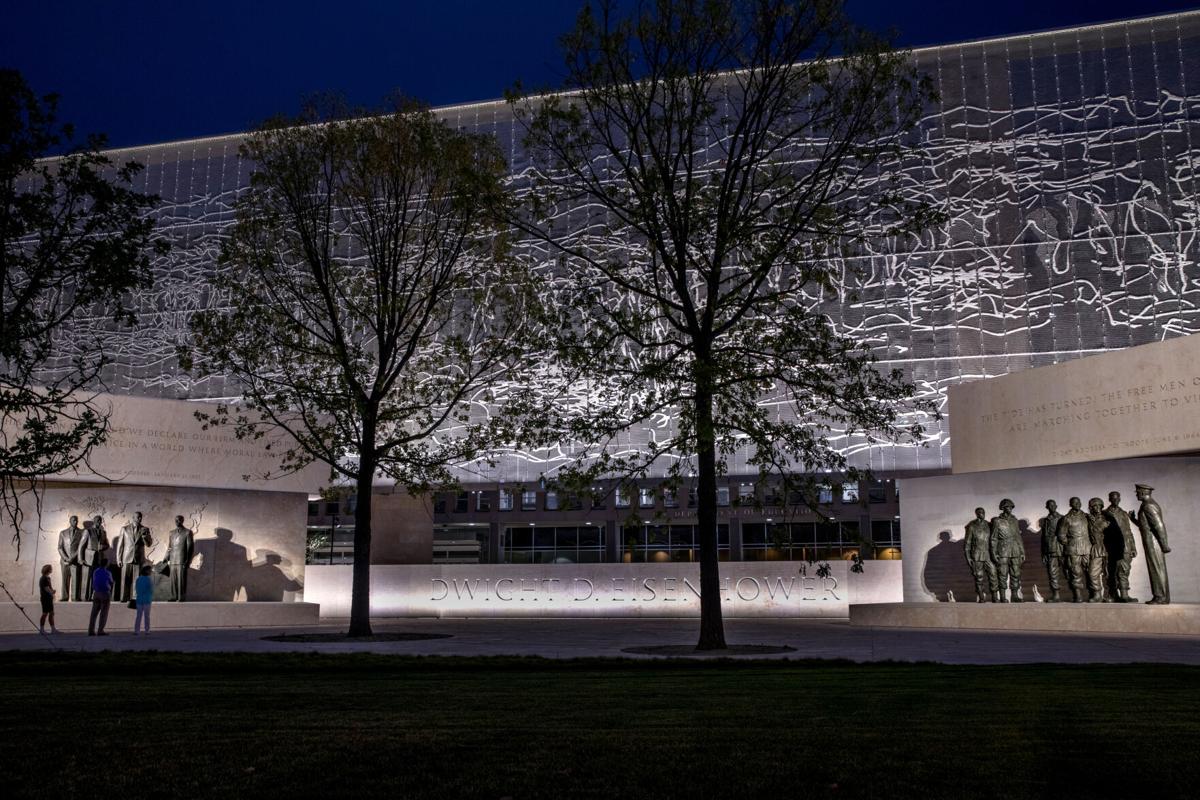 A MAGICAL NIGHT: At night, with the lights on, the new Eisenhower Memorial is magical. Evelyn Hockstein/For The Washington Post

A DREAMER: A small, life-size statue of Dwight D. Eisenhower as a boy at the new Eisenhower memorial. Evelyn Hockstein/For The Washington Post

A SEGUE: A statue of a young Dwight D. Eishenhower at the soon to be opened Eisenhower Memorial, designed by world-renowned architect Frank Gehry, in Washington D.C. Evelyn Hockstein/For The Washington Post

A VISION: The memorial to Dwight D. Eisenhower was authorized by Congress in 1999, when Bill Clinton was president. Evelyn Hockstein/For The Washington Post

A MAGICAL NIGHT: At night, with the lights on, the new Eisenhower Memorial is magical. Evelyn Hockstein/For The Washington Post

WASHINGTON - Now that the memorial Frank Gehry designed to honor Dwight D. Eisenhower is finished, the acclaimed architect isn't dwelling on the turmoil and rancor stirred up by those who opposed his design. He sounds like a happy man.

"What an adventure," Gehry said in a recent phone interview from his office in Los Angeles. "I wouldn't have missed it for anything."

A memorial to the nation's 34th president was authorized by Congress in 1999, when Bill Clinton was president. Gehry's design, which featured a giant metal tapestry hung from huge masonary-clad columns, was selected by the memorial commission in 2010, and it quickly became a lightning rod for criticism.

Over the past decade, and at almost every step - from the design competition to the groundbreaking in 2017 - the project was dogged by controversy, subject to congressional hearings and, at one point, effectively defunded by the government. For years, it seemed that the entire Eisenhower family, including the president's son John Eisenhower (who died in 2013) and his granddaughter Susan Eisenhower, opposed Gehry's unorthodox vision for a contemporary memorial that reflected the full arc of Eisenhower's life rather than his monumental accomplishments.

But Gehry, 91, stuck with the project, made substantial changes to the design - removing some of the tapestries, changing the image depicted on the remaining one, moving statues and tweaking sight lines - and eventually earned the family's support.

"I am not a quitter by nature," says Gehry, for whom the project was deeply personal. The architect, who is Jewish and whose mother was born in Poland, lost family in the Holocaust. He also served in the Third Army, where, in the early 1940s, Eisenhower was chief of staff to the commander. Gehry says he admires Eisenhower deeply, for his modesty, competency and his accomplishments, which the architect believes aren't sufficiently appreciated. Eisenhower, who was president from 1953 to 1961, seems to represent to the Canadian-born Gehry an ideal of America, as he does to many Americans now appalled by the degradation of our political leadership.

"I am very proud of it, but what makes me even prouder is that the family and the people who knew him are pleased with it," Gehry says. Susan Eisenhower, who worried that the giant columns could be misconstrued as missile silos and that the tapestries might remind people of Communist-era memorials to Marx, Engels and Lenin, confirmed in an email: "Frank Gehry is right. My family and I support this design."

The memorial was scheduled to open May 8, the 75th anniversary of the day Allied forces accepted Germany's surrender in World War II, but the pandemic pushed that date to Sept. 17. Yet with the exception of some trees that need to be replaced, the memorial is essentially finished, and although the public can't wander through it now, it is easily seen through and above the surrounding fence.

It is unlike any other memorial in Washington, or the world. The design was largely dictated by the awkward site, a four-acre patch of land just south of Independence Avenue, opposite the Smithsonian's National Air and Space Museum. The south side of the square is occupied by the U.S. Education Department's Lyndon Baines Johnson Building, an oblong modernist box with few lovable features. The site is also bisected by Maryland Avenue, which offers a particularly fine view of the U.S. Capitol, a view that preservationists and oversight groups felt had to be protected.

A vision for the site

Gehry's response to the site was deft and daring. He proposed a giant screen, dubbed a tapestry, along the south edge, effectively veiling the Education Department. The idea of a metal tapestry with a representational image on it was both a reference to an earlier memorial tradition - woven-cloth tapestries were used for centuries to glorify emperors, kings, the victors in battle - and a radical departure from the tradition of using solid stone as the essential medium for monuments. But the tapestry also allowed Gehry to create a parklike space in front of it, a little green oasis in a part of the city that is famous mainly for its dispiriting bureaucratic architecture.

The tapestry, unfortunately, isn't entirely successful. By day, its sketchy, almost abstract rendering of the Normandy coast at Pointe du Hoc (site of a critical engagement during the American landing) isn't easily legible. The design is better seen from the backside, where the welded metal overlay on the tapestry's support mesh is visible in sharper relief. From the front, on a sunny day, the grid of windows from the Johnson building overwhelms the image.

But at night, with the lights on, it is magical. The Education Department disappears, and the trees, not yet substantial enough to offer shade by day, become pleasantly ornamental, defining an allee that leads to the Capitol. The grasses that mark the old Maryland Avenue footprint are inviting, and the yellow stone of the paving and pedestals that support the larger-than-life-size statues - one group devoted to Eisenhower's military career, another to his time as president - glows a soft yellow. The bronze statues, and the bas-reliefs behind them, project a more theatrical ambiance under artificial light than in the glare of the midday sun.

An idea of morality

And at night, one can still detect some of the melancholy that was subtly woven into Gehry's original plan. This centers on a small, life-size statue of Eisenhower as a boy that the architect had planned to mediate between the two statue groupings. Critics of that idea felt it trivialized Eisenhower's accomplishments, and the statue was eventually moved to the far, western edge of the memorial site. But the idea of mortality, and the frailty of any one particular life, remains, and now it seems that Eisenhower the boy is a memory of Eisenhower the man, a memory pushed far from the presence of daily consciousness, but a memory that cannot be erased.

No effort was spared to get the tapestry right. It needed to be weatherproof and sturdy enough to last for decades at least, yet also transparent enough not to block light and views from the Johnson building. Mock-ups were created and different techniques pursued, until finally a metal design was welded rather than woven onto a supporting mesh, as Gehry initially had imagined.

Changing the design, which had first represented the landscape of Eisenhower's boyhood in Abilene, Kan., was crucial to convincing the family to support the memorial. In the end, Gehry sketched the cliffs at Pointe du Hoc freehand, in his characteristic drawing style - a herd of frenetic squiggles, like a jazzy, elongated Rorschach blot. For years, critics of Gehry have singled out his supposed egotism, repeating the canard that he wants to be an artist rather than an architect and that his buildings are too subjective and driven by creative whim to be useful. And yet, in the end, after a long process of revising the tapestry, it ended up looking more like a giant abstract painting than a traditional, representational rendering of the landscape. In her email, Susan Eisenhower singled out "the change of theme to 'The Beaches of Normandy in Peacetime,' " as key to her support.

The abstraction of the design renders its daytime illegibility a little less disappointing. By day, it's best not to think of it as a tapestry, but rather a metal scrim, and it serves that function perfectly well, defining the space rather than rendering a visible image. And by day, there is a nice surprise: The architecture of the surrounding buildings, including the Air and Space Museum and the National Museum of the American Indian, has an appealing unity. The stone color is similar, and there are common elements in some of the design vocabulary. The benches and planter boxes, hard-edge and scrupulously modern, could easily wander off-site and live happily at either of the two museums that face the memorial.

The opening of the memorial will now happen as the current political season enters its final chapter before the Nov. 3 election, which means it could prompt some anguish and soul-searching about the Republican Party. Eisenhower may have been a Republican, but he was a very different politician than his party now supports. It is difficult to imagine him tolerating a Republican president who avoided military service, mocked the war record of the late senator John McCain, and successfully embroiled the military in crushing a peaceful political demonstration outside the White House.

Eisenhower's career, especially as president, was far from unblemished. He cozied up to the brutal dictator of Spain - Francisco Franco - toppled the elected leader of Iran and signed Executive Order 10450, which barred gay and lesbian people from government service and led to the purge of thousands of LGBT federal employees, a milestone in the annals of bigotry.

But his talent, his service and his temperament were exceptional by contemporary standards, and they dwarf the man to whom he will inevitably be compared. This won't be the last memorial erected in Washington, but it feels a bit like the last memorial of a passing age. The idea of great men is necessarily more complicated and fraught than it was when this memorial was conceived. The country that Eisenhower led to victory three-quarters of a century ago is now a pathetic object, mocked and pitied around the world, unable to keep its people safe from a virus that other countries have contained.

None of this was in the air when Gehry started thinking about his design. But we can be thankful that, for all the design concessions that led to a more traditional, more conventionally heroic memorial, the architect's generous feelings to Ike are what remained consistent, and they soften the edges of this monument. My guess is that in a few years, its connection to Eisenhower will seem a secondary feature of the design, which will be primarily regarded with affection as a green island of old-fashioned geniality in a failing city that was once the capital of the free world.