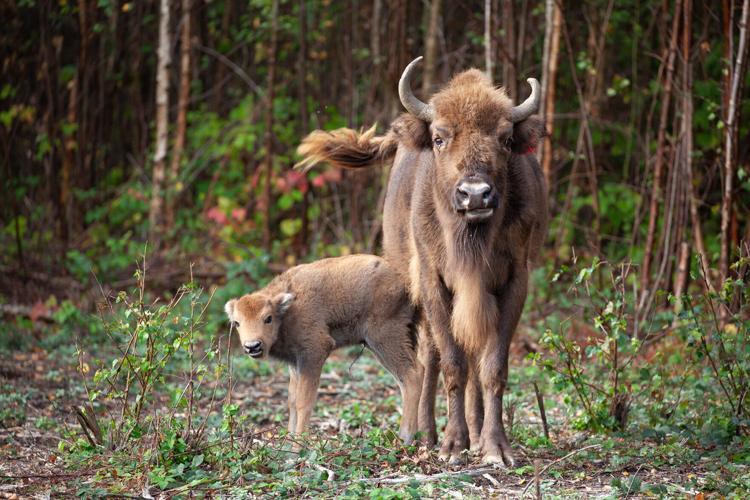 MOTHER AND CALF: The newborn calf with her mother, Female 2. The calf is healthy and getting stronger every day. Photo by Donovan Wright 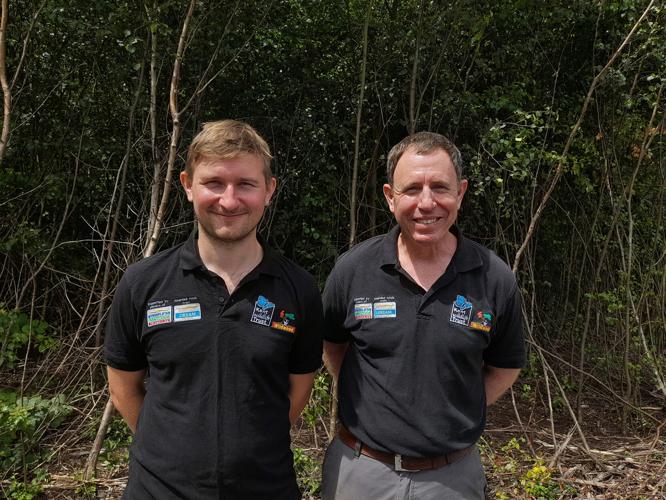 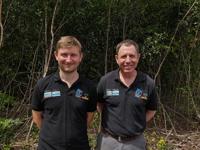 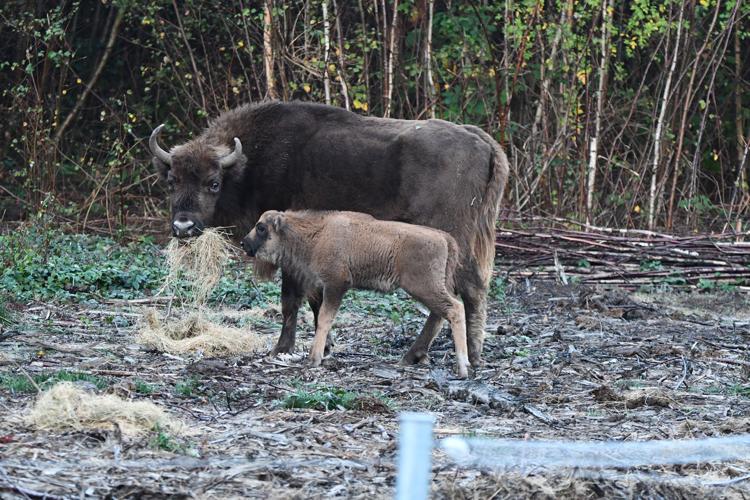 POSITIVE IMPACT: Since arriving in July, the bison have already had a major impact on restoring the natural habitat. Photo courtesy of Wilder Blean 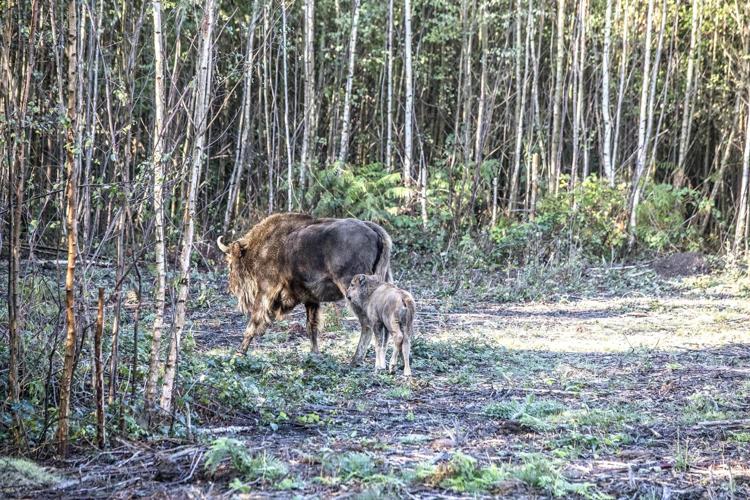 ECOSYSTEM ENGINEERS: Mother and calf walk into the forest together. Bison are considered ecosystem engineers, as they naturally reshape and restore habitats. Photo by Gemma Day

MOTHER AND CALF: The newborn calf with her mother, Female 2. The calf is healthy and getting stronger every day. Photo by Donovan Wright

POSITIVE IMPACT: Since arriving in July, the bison have already had a major impact on restoring the natural habitat. Photo courtesy of Wilder Blean

ECOSYSTEM ENGINEERS: Mother and calf walk into the forest together. Bison are considered ecosystem engineers, as they naturally reshape and restore habitats. Photo by Gemma Day

Tom Gibbs was getting worried. He was deep in the remote woodland of South East England, anxiously searching for Female 2, a bison that had strayed from the herd.

"You start to think of the worst-case scenario," said Gibbs, a bison ranger at Kent Wildlife Trust, a British-based conservation charity.

A few days later, he heard tiny hoofs ambling around and noticed a tail swishing in the distance. Relief washed over him - followed by disbelief and delight.

"I didn't even believe my own eyes," he said.

Gibbs discovered that Female 2's days-long departure from the herd was actually the best-case scenario: She had secluded herself to give birth to the first wild bison born in Britain in more than six millennia. "It was such a magical moment, and so iconic what it represents for conservation and wilding in this country," said Gibbs, who first spotted the baby bison on Sept. 9.

"I saw this little face pop out from behind mom," he said. Gibbs stood there for two hours, "just watching the calf and the mom," he said, adding that bison naturally conceal signs of pregnancy to stave off predators, so the rangers had no clue she was expecting. "I wanted to scream it from the rooftops."

The birth was a happy surprise for the team of rangers working on the Wilder Blean project, which brings grazing animals to the West Blean and Thornden Woods in Kent as a way to address climate and biodiversity crises.

"Bison are this amazing, versatile tool," said Gibbs, adding that he hopes they will be one of the keys to help reverse troubling environmental trends in the area.

Bison serve as ecosystem engineers - a term used to describe species that can alter and maintain a habitat. The shaggy-haired animals, which have been described as "woolly bulldozers," are seen by scientists as climate heroes.

"They are quite big and robust, so they can really shape and engineer the landscape around them," said Gibbs explaining that their fur debarks trees, they mow grass with their mouths, their large bodies create pathways throughout the dense forest and their nutrient-rich manure helps other species flourish. "Everything they do has this positive impact and shapes the world around them."

The project is run by two local conservation charities - Kent Wildlife Trust and Wildwood Trust - and is the first of its kind in Britain, though similar initiatives are underway in other parts of Europe and North America.

Three female bison were brought from wildlife parks in Scotland and Ireland to a 500-acre area in July and will eventually be joined by wild horses and pigs. While the goal is for the animals to fend for themselves in the wild, they are being closely monitored and slowly weaned off supplemental food - which is what they were fed previously in parks.

"We want to remain as hands-off as possible, but their welfare is at the absolute heart of what we do," Gibbs said. The team is paying close attention to the calf - who is the fourth member of the herd.

The birth is a big deal for a number of reasons, including that bison were once on the brink of extinction. European bison were nearly driven to their demise in the early-20th century due to excessive hunting. Only a small number survived and were kept in wildlife parks and zoos.

In fact, according to Paul Whitfield, the director general of Wildwood Trust, all 9,000 bison living in Europe are descended from only 12 zoo animals. The calf's recent birth, he said, is a major step toward growing the population. Bison have a life span of about 15 to 20 years in the wild.

"In the U.K., we've lost almost all our mammals," said Whitfield, adding that it's one of the most nature-depleted nations in the world. "We've just slowly eaten away at all the wild places. Over time, and through hundreds of years of hunting, we've basically just killed everything."

The Wilder Blean project, Whitfield said, is an effort to reverse that damage - and it's already working. "It's very much putting back in place the missing ecosystem processes," he said. "We've been intensely farming and managing the land for hundreds of years. There isn't really much wilderness or wild left."

Funds are being raised for Wilder Blean, all of which will go toward rewilding - a conservation effort intended to replenish land and restore it to its natural state.

"To me, rewilding is about working with nature and using nature's natural processes to regenerate wildlife," Whitfield said, explaining that the bison will accomplish that task "just by living and moving through the woodland."

Traditional conservation methods managed by humans - such as woodland coppicing, a practice of cutting down trees to stimulate new growth - aren't as effective, he said, "which is why we need rewilding approaches where we're not trying to keep it as is, we're trying to make it much, much better."

Unlike humans, bison naturally nurture the land and work intuitively to create "niches for other species to move in and thrive," Whitfield said. "It creates a far more complicated, rich, diverse habitat."

In the short time since the bison arrived on the land, they have begun transforming the habitat for the better, by carving paths throughout the forest allowing the sunshine to pour in, and fertilizing the soil with their manure, encouraging the growth of herbs, fungi and other species.

"I was really pleasantly surprised by how quickly you can see the changes," said Whitfield, adding that more animals are expected to arrive shortly, including a bull to breed with the three female bison.

"We thought the earliest we'd have calves was autumn next year," Whitfield said. As more animals join the mix, "we're hoping for all sorts of surprises." So far, the unexpected birth of the baby bison has been the highlight of the project.

"No one is saying this area of Kent is going to change the world, but what it is showing is that we can do it," said Whitfield, who has been in communication with two other U.K. organizations that want to facilitate similar bison projects. "It's already inspiring other people."

'It's a rare sunshine'

More broadly, he said, when it comes to our climate, the world needs some positive developments.

"The vast majority of environmental news is incredibly bleak. It's doom, it's gloom, it's statistics of how many species we've lost, and how terrible things are," said Whitfield. "In a world that's on fire, in this little corner of Kent, here's this little ray of hope."

Whitfield, Gibbs and the rest of the Wilder Blean team marvel at work each day, watching the wild calf grow and thrive - and the environment around her do the same. She enjoys playing in the rain, dust bathing and imitating her elders.

"To see her getting stronger every day and being really inquisitive and cheeky, to be able to share in that is so humbling," Gibbs said. "We're like proud bison dads."

Above all, the calf has given the team hope for a healthier planet. "It's a rare sunshine," Gibbs said. "It's the first step into a really exciting future."