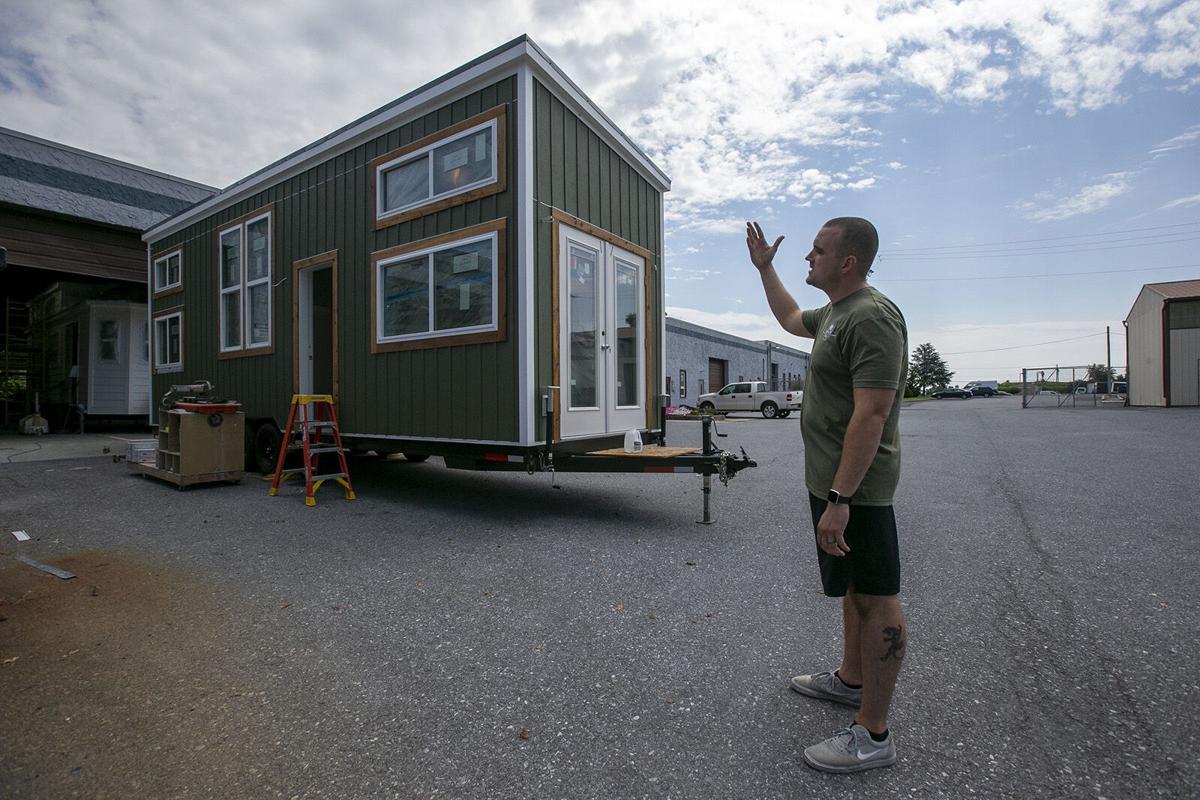 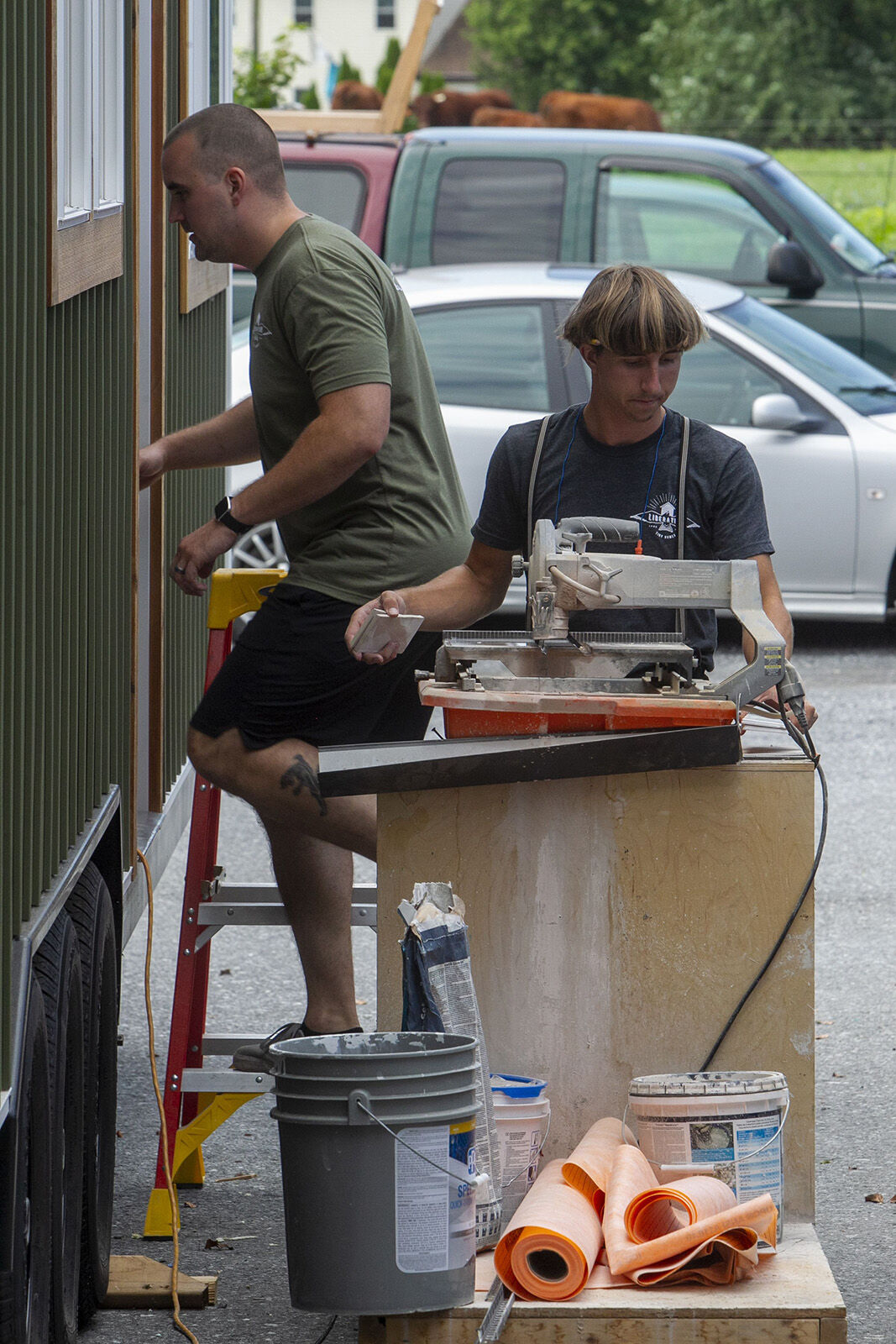 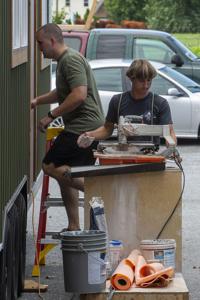 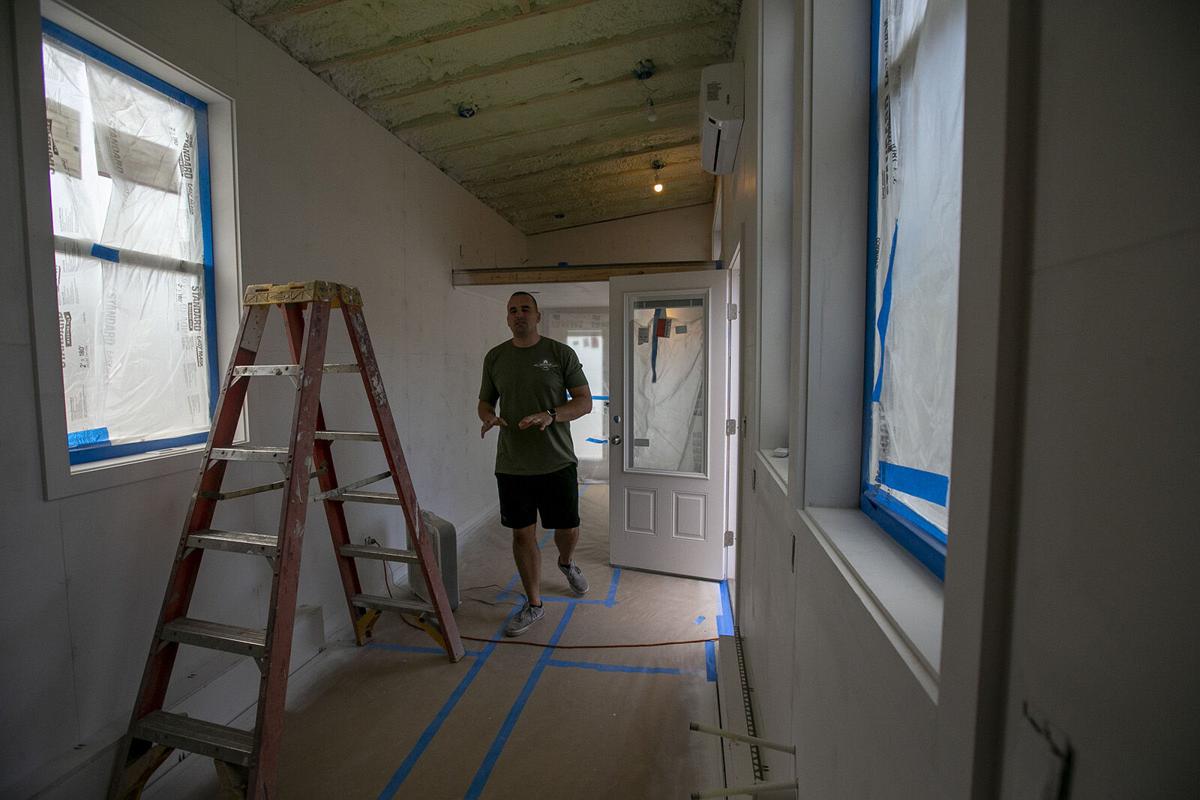 WALK-THROUGH: Marcus Stoltzfus, co-owner of Liberation Tiny Homes, does a walk-through of the still-raw interior of one of his products. Alejandro A. Alvarez/The Philadelphia Inquirer

WALK-THROUGH: Marcus Stoltzfus, co-owner of Liberation Tiny Homes, does a walk-through of the still-raw interior of one of his products. Alejandro A. Alvarez/The Philadelphia Inquirer

And in the town of Leola, not 50 feet from a clutch of cows lounging under a hot summer sun, a small workshop hums and bustles with the creation of a product that could, someday soon, help the homeless in Philadelphia.

"Tiny homes," said Matt Meshey, a co-owner of Liberation Tiny Homes. "We see them as the solution to a lot of issues, homelessness being one of them. This has gone from a novelty to people realizing it's something they can really do."

Both Philadelphia officials and organizers of the homeless encampment on the Benjamin Franklin Parkway – 2 months old as of Monday – have discussed the possibility of using tiny homes to house many of those now living in tents on a ball field at 22nd Street.

How is it that a group of 12 Lancaster County craftsmen who either grew up Amish or have Amish heritage is hammering out a new way to potentially solve one of the knottiest problems in America's poorest big city, 75 miles to the east?

This unlikely story starts with an impassioned individual with a vision.

'This is my life's work'

Stephanie Sena, 41, a professor who teaches courses on poverty at the Widger School of Law at Villanova University, has worked for years helping individuals who are homeless. She's the founder and executive director of the Student-Run Emergency Housing Unit of Philadelphia. Since 2011, the organization, with chapters at various local colleges and universities, operates homeless shelters in church basements during the cold months.

Sena, who considers homelessness a human rights violation, is on a first-name basis with many of the roughly 1,000 street homeless in Philadelphia. A few of the 100 to 150 people now occupying the Parkway encampment have been to her house for dinner.

She's been working with City Council as well as the Department of Licenses and Inspections on a plan that could recalibrate current thinking on homelessness.

Sena expects to soon start a pilot program that would create a village of 20 tiny homes per acre for the homeless on available city land. She's looking at a price tag of $40,000 to $50,000 per unit, 8 1/2 feet wide by 30 feet long by 13 1/2 feet high. The cost includes water, sewer and electrical hookups. It's not yet clear how many acres would be used.

"The city is turning to us," said Sena, who met with L&I leadership on Monday to iron out some zoning and code problems. Several members of City Council have already indicated they're on board.

"I'm confident this will go forward," Sena said Monday morning. "This is my life's work. We are so close."

Sena said she is lining up funding from private and nonprofit sponsors. In her thinking, the residents would own a share of the village, and, as each home appreciates over time, the tiny home occupant could take out some of the equity after he or she moves.

"This is a really good idea," said City Councilmember Kendra Brooks, who accompanied Sena and other council members on a trip to Liberation Tiny Homes earlier this summer.

"The homes are quality and offer privacy. It would not be like living on the streets or in a shelter. People deserve dignity, a fresh start."

L&I officials did not respond to a request for comment.

The seemingly incongruous pairing of a Villanova professor and a coterie of country builders, none of whom has a college degree, somehow works.

"We're on board with Stephanie's vision," Meshey said. "She talks about a community setting with wellness centers in a village. It's more than just houses for people. She's been fighting for this for years. She impressed us."

'The key word here is home'

At Liberation the other day, co-owner Marcus Stoltzfus gave a tour of the small factory, his voice rising to overcome the whirring of saws in the kinetic workshop.

The 5-year-old workshop is one of only two that manufacture tiny homes in Pennsylvania, the other being not far up the road, also in Lancaster County. There are probably just 75 to 100 builders of tiny homes in the United States, according to Dan Fitzpatrick, president of the Tiny Home Industry Association, headquartered in Denver.

Liberation homes are typically made of PVC vinyl and look well-crafted, not like the garage sheds many people picture when they think of tiny homes, Stoltzfus said. Inside, even within the 255-square-foot footprint, there's ample room for two individuals and a pet to live, he said.

To demonstrate Liberation's flexibility in making tiny homes not just for the homeless, Stoltzfus pointed out a larger-than-usual model costing more than $100,000 being built "for an actress whose name we all know." She needs it as a guest house on her Massachusetts property.

Stoltzfus conceded that Liberation tiny homes run around $10,000 or so more than Sena's desired price. "But," he said, "we will partner in some way with the city."

Sena and the Liberation craftsmen have discussed ways to drive down costs, such as having homeless individuals trained to help make their own homes.

One of the big selling points of tiny homes is that they are built on wheels, Liberation homes included. Sena said the Philadelphia homes must be on foundations, and that she will figure out a way to make the conversion.

Tiny homes are on tires because mobility is a convenience for the biggest groups of tiny home buyers: baby boomers and millennials, Fitzpatrick said.

The older folks are looking to downsize and move from place to place. Or they want something to put in the yard to rent out or give to their kids after they graduate from college.

As for millennials, Fitzpatrick said, "they have to move from job to job in this new economy. I call them 'turtles' because they will take their tiny homes with them at every stop. You have traveling nurses, traveling professors."

Ultimately, Fitzpatrick said, tiny homes are "perfect for the kind of housing Stephanie Sena wants for the homeless."

And, he added, "even though you call it a tiny home, remember: The key word here is home."

The seemingly incongruous pairing of a Villanova professor and a coterie of country builders, none of whom has a college degree, somehow works.