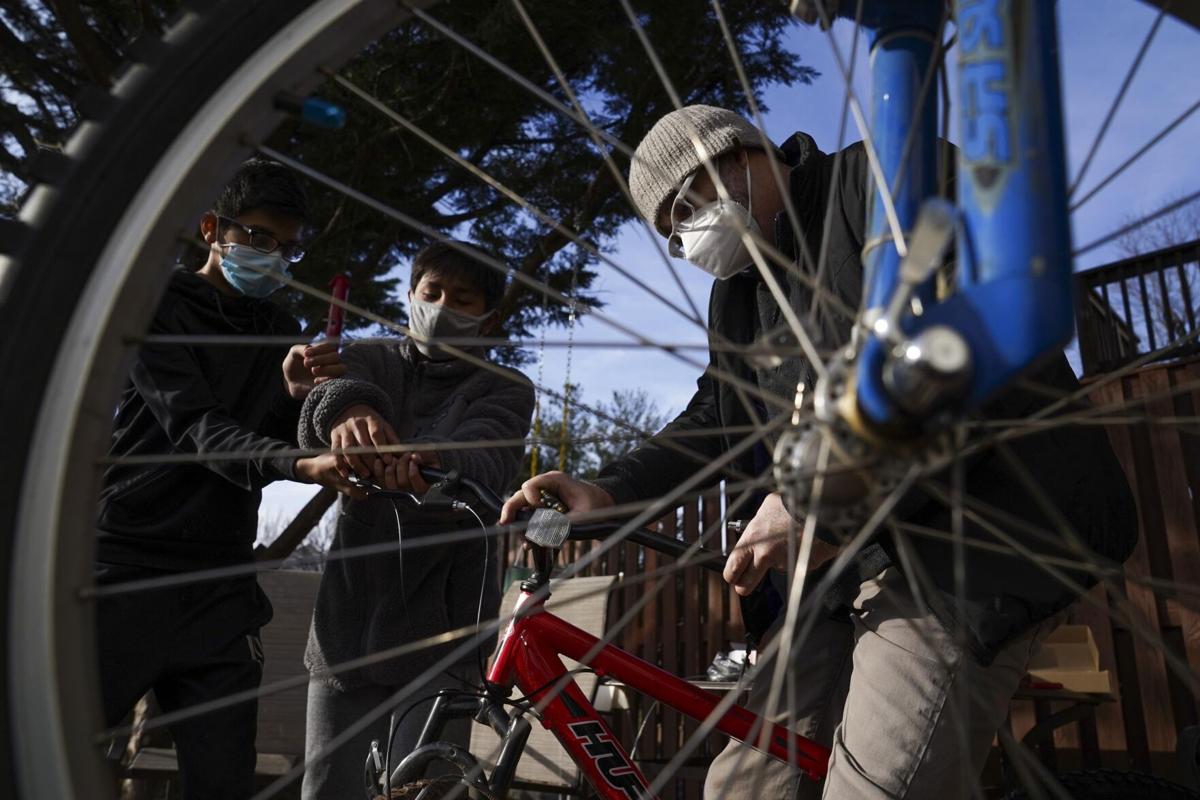 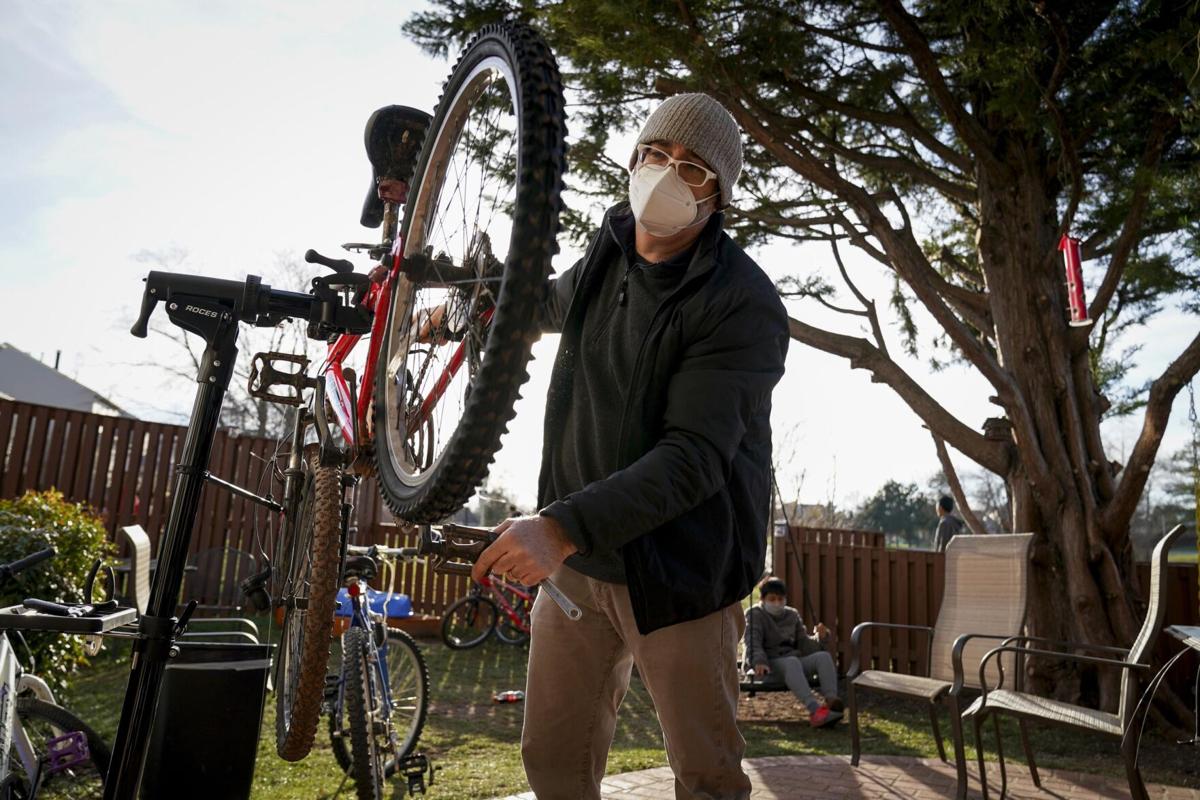 PRUITT: Robbie Pruitt repairs bikes for neighborhood children at his home in Ashburn, Va. Pruitt is repairing and giving away bikes free during the coronavirus pandemic. Jahi Chikwendiu/The Washington Post 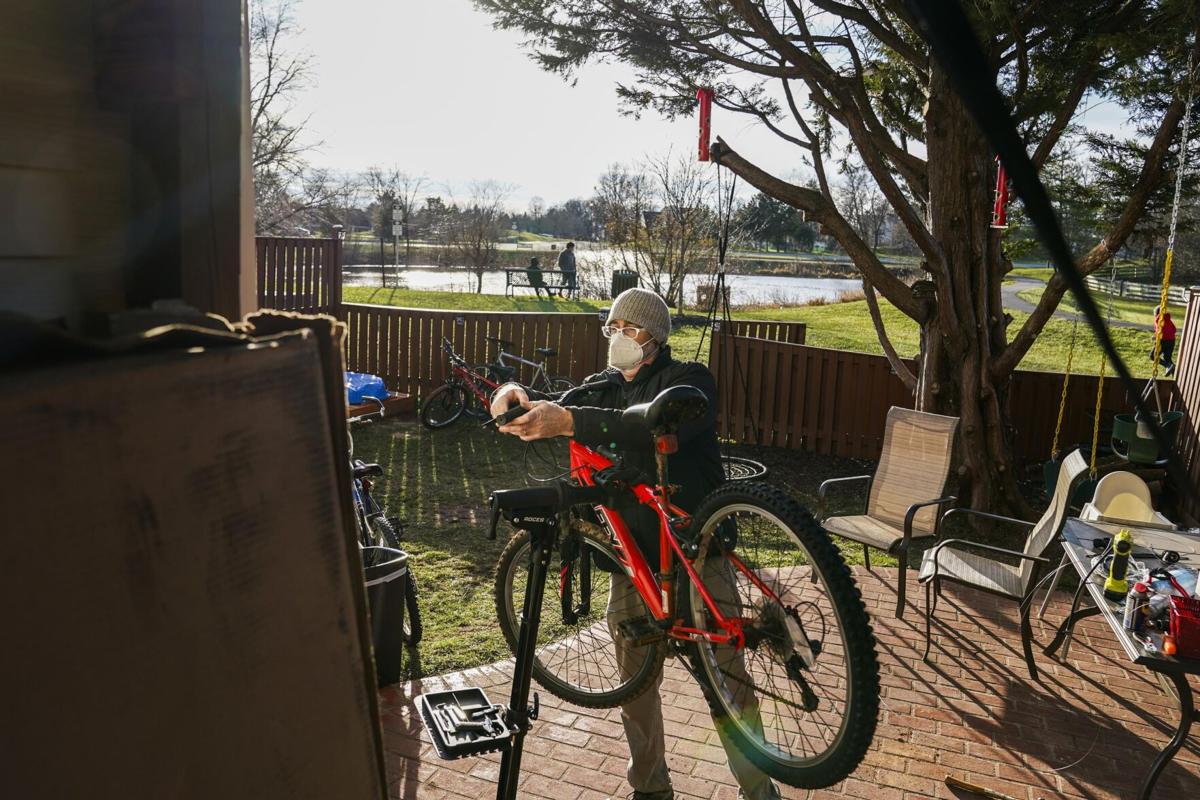 PRUITT: Robbie Pruitt repairs bikes for neighborhood children at his home in Ashburn, Va. Pruitt is repairing and giving away bikes free during the coronavirus pandemic. Jahi Chikwendiu/The Washington Post

Someone stole Robbie Pruitt's mountain bike off the rack of his Honda Odyssey in September. Pruitt visited a local bicycle store in Ashburn, Va., the next day only to find there were very few bikes in stock available to buy.

That's when an idea hit him – the thief might have stolen the bike because they're in short supply during the coronavirus pandemic. What if the thief needed the bike to get to work? Pruitt, 44, wanted to help people who might be in such a predicament.

Pruitt, an assistant rector at the Church of the Holy Spirit in Leesburg, Va., posted on a private Loudoun County Facebook page that he'd fix anyone's bicycle free. In the post he also said he was accepting unwanted bikes, which he'd fix and donate to people in need.

He ended with: "Hope and pray this bike met the need of the person who took it."

That day, he received about 30 bicycles at his townhouse. After his next post, about 500 people expressed interest in either donating bikes or having Pruitt fix them.

He set a goal of fixing 100 bikes before the end of 2020. He surpassed that, repairing more than 140 bicycles – donating about 60% of them and returning the rest to their owners. He gives bikes to anyone who asks, but tries to support children and families who are struggling. Most requests come in on Facebook.

But perhaps more important, along the way, he has taught more than a dozen young people in Loudoun County to mend their own bikes and the bikes of others.

"You're certainly providing a service, but it's not the bikes," said Pruitt, who has three children – Grace, 7, Hannah, 4, and Simeon, 1. "It's the relationships in the community. It's the impact you can make with people."

Pruitt's interest in helping people with their bikes during the pandemic started a couple of months before his was stolen.

One July evening, after returning from a mountain bike ride in Reston, Pruitt was revamping the disc brake on his red Diamondback bicycle in front of his house when a group of four children from the neighborhood approached on their own bikes. Pruitt asked if they wanted to learn how to repair parts of a bike. Pruitt also noticed their bicycles were in bad condition, and some had flat tires. That night, he fixed them.

It was the start of a friendship, and a neighborhood project.

"All the neighborhood kids are spending a lot more time doing something that's hands-on," said Danny Offei, Pruitt's next-door neighbor. "Almost everybody in the neighborhood has a bike now, and he's helped put those bikes together."

On a recent afternoon, Pruitt had a red Huffy mountain bicycle in his hands and called out to six young people playing soccer behind his house.

"All right, guys," he said to them. "Somebody test ride this bike."

Pruitt handed the refurbished bike to Santi Palomino, 12, whose eyes lit up when he grabbed the new black grips Pruitt had added to the handlebars. "Woah," he yelled, and his friends gathered around, also wanting to see how Pruitt had upgraded Santi's bicycle.

"I'll sleep better at night just because I did this," said Pruitt.

Pruitt grew up with his mother and two siblings in Columbia, S.C., where he said he'd always been interested in building and fixing.

His favorite Christmas gift came as an 11-year-old, he said, when his mother presented him with a Redline BMX bicycle. After that, Pruitt said he searched trash bins for discarded bicycles so he could teach himself to repair them with materials he salvaged.

In 2004, when working for Epiphany Episcopal Church in Herndon, Pruitt began repairing and donating bicycles as part of a church project. He remembers the joy when a co-worker offered him his Rockhopper bicycle free. Pruitt said he wanted others to experience that feeling.

Pruitt and some members of his church moved in 2011 to Port-au-Prince, Haiti, where Pruitt fixed bicycles for students at a Christian school where he was a Bible teacher. He also had bicycle materials shipped from the United States and built about 15 bikes. He created a shed for them, and made them available to teachers or students whenever they wanted to take a ride. When Pruitt returned to the United States in 2016, he left the bicycles for others to enjoy.

Pruitt and his wife, Irene, moved to Alexandria in 2016. He rode his bike often, but didn't find an opportunity to repair others' bikes. That changed in July after his family moved to Ashburn, and he saw the condition of some of the neighborhood children's bikes.

Now, many nights, Pruitt is online, buying materials such as seats, brake levers, handlebars, training wheels, shifters, pedals and brakes. He estimates he has spent almost $1,500 on parts. Pruitt said repairing each bike takes around 30 minutes, depending on what it needs. He tries to restore each one so it's as good as new.

"The feeling you get when somebody rides off with a bike that didn't have one ... there's a lot of gratification," said Pruitt.

Inspired by his own childhood, Pruitt goes out of his way to help single mothers. One who had recently moved from Washington state needed a birthday present for her son. She messaged Pruitt, and the next day he delivered her a yellow bike, he said, that was just her son's size.

Pruitt's favorite part of his bike project is creating friendships. He said after he fixes bikes, the owners will sometimes drop by his backyard just to chat. Some people will bring him food, including a Greek family that dropped off chicken souvlakia on Christmas Eve.

When the pandemic passes, Pruitt plans to grow his program into an activity at his church. But for now, Pruitt is happy to help anyone who asks on his own dime. That includes Santi, the 12-year-old who recently received a refurbished bicycle from Pruitt.

"He's impacted everyone in the community," Santi said before he and three friends began biking toward the Washington and Old Dominion Trail. It was an hour before sunset, but they planned to stay outside on their bikes until the last drop of daylight.

He set a goal of fixing 100 bikes before the end of 2020. He surpassed that, repairing more than 140 bicycles – donating about 60% of them and returning the rest to their owners.