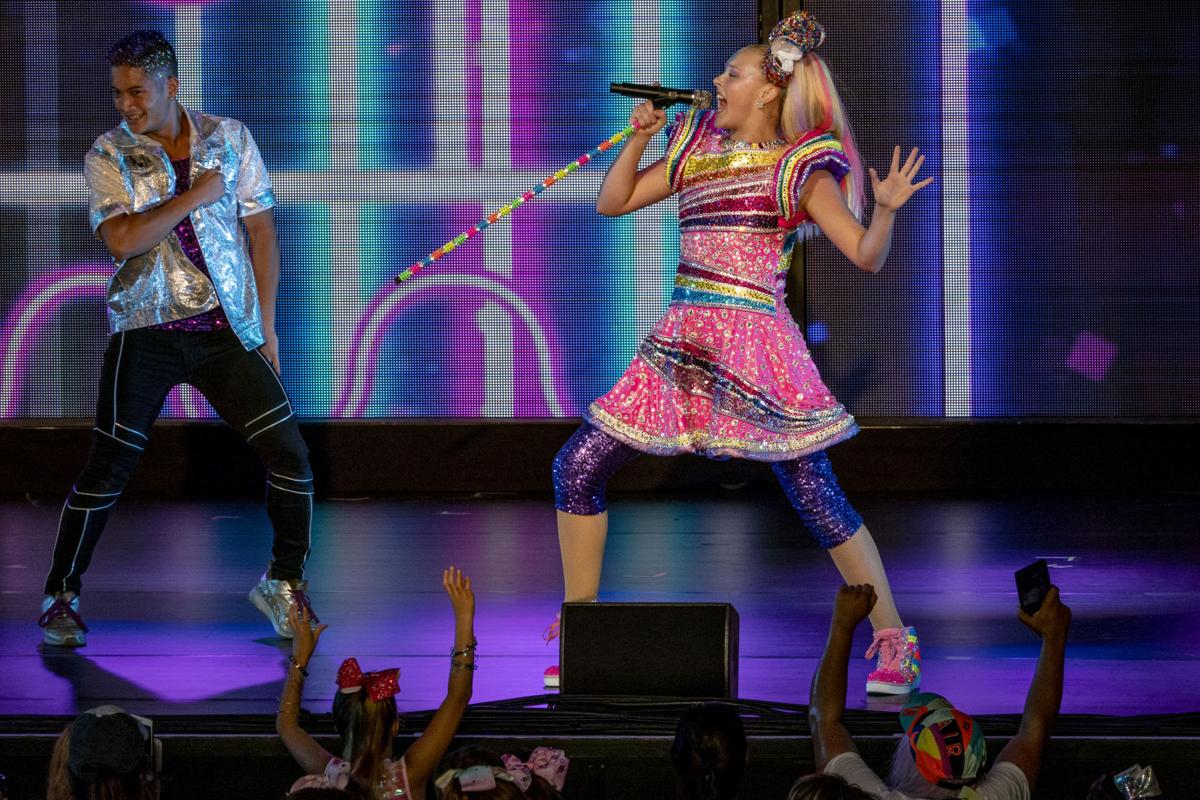 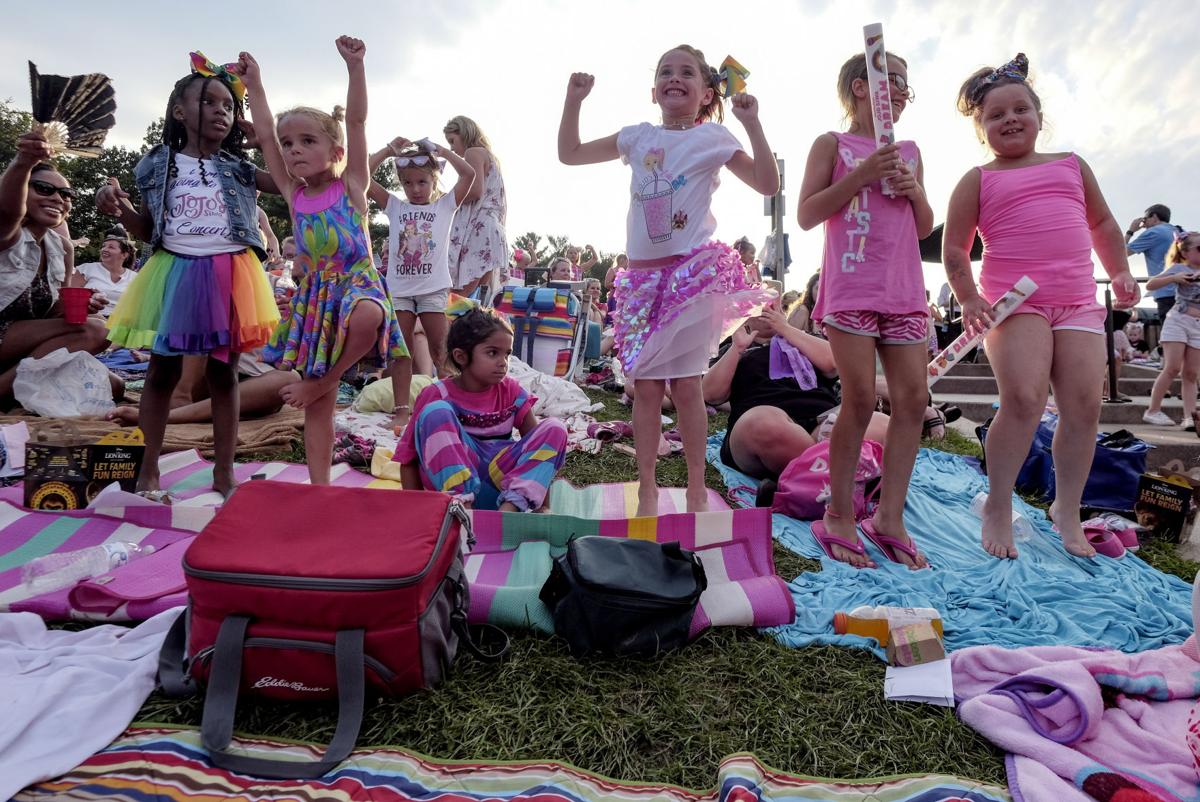 PRETTY IN PINK: Young girls dance while waiting for JoJo Siwa to perform at Wolf Trap National Park for the Performing Arts in Virginia. 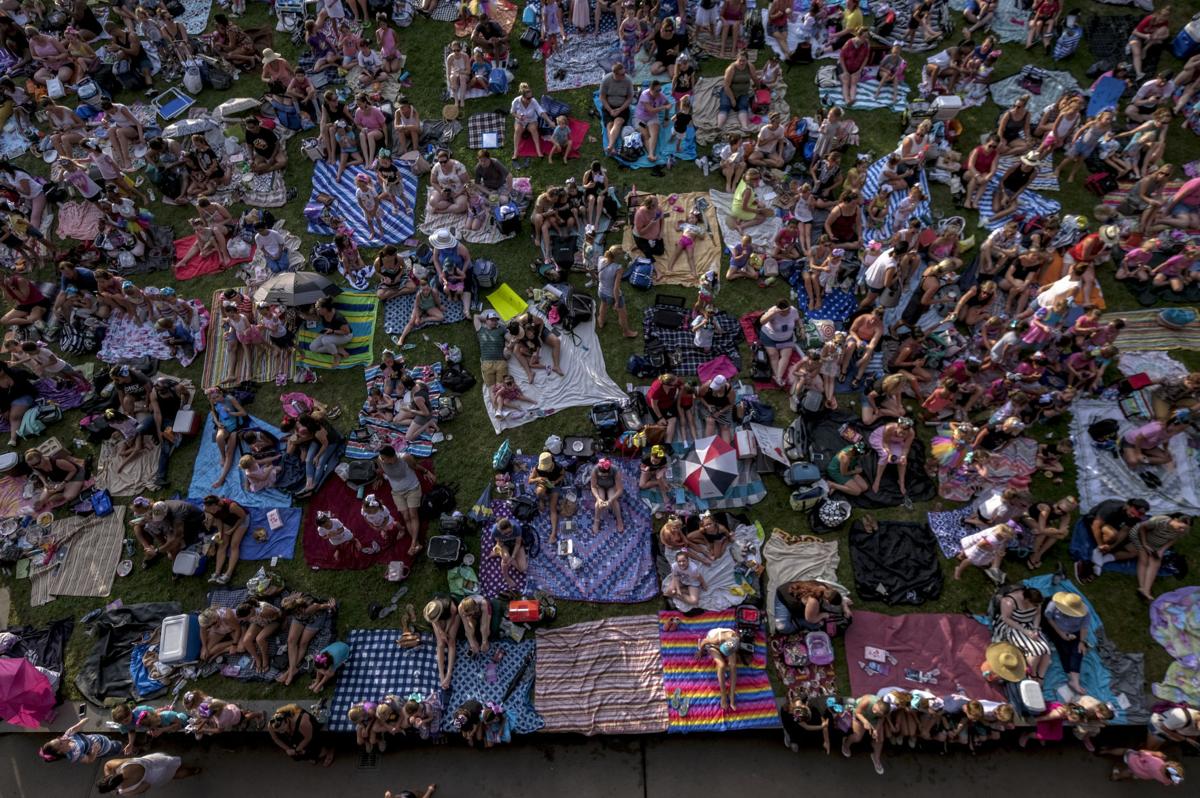 A MOB AWAITS: The scene on the lawn for the sold-out concert, attended mostly by young girls and their mothers.

PRETTY IN PINK: Young girls dance while waiting for JoJo Siwa to perform at Wolf Trap National Park for the Performing Arts in Virginia.

A MOB AWAITS: The scene on the lawn for the sold-out concert, attended mostly by young girls and their mothers.

VIENNA, Va. – The concert opened with a fanatical countdown chant.

Legions of fans in oversize hair bows let out a collective high-pitched shriek. They leaped out of their parents' arms and the sweaty plastic seats of the Wolf Trap amphitheater, scrambling for a clearer view of the sparkling silhouette onstage: 16-year-old pop sensation JoJo Siwa.

Joelle Joanie Siwa is an enigma to most adults. At first glance, the former "Dance Moms" star looks like an escapee from the Candy Crush universe, whimsically dressed in a mishmash of neon sparkles, rhinestones and glitter. Her music is similarly shiny – a message of self-love, confidence and girl power over a manufactured electro-pop beat. But parents who've been through it will tell you: Once a child has sipped the JoJo juice, there's no going back. It opens the doors to a world of colorfully excessive merchandise, loud YouTube shenanigans and – perhaps her greatest parental selling point – G-rated, good-natured fun.

Her songs, with titles such as "Boomerang," "Kid in a Candy Store" and "High Top Shoes," sound juvenile – but then again so are her fans. The Siwanatorz, the official name for her fans, fall typically within the toddler and tween age range.

"It's fun, but I know it'll be a short-lived obsession," Cassie Lutjen said. For now, the obsession is real, she said, nodding to her daughter Maisie, 7, who was clutching a glittery poster that said "I HEART JOJO."

Maisie recently celebrated her birthday with a JoJo-themed party and owns "too many bows to count," scattered across their home in Manassas, Virginia. (A bow was ceremoniously clipped onto Lutjen for the occasion.) But JoJo's empowering and cheery lyrics are what makes Lutjen willing to buy into the phenomenon, for as long as Maisie's interested.

The thousands of parents who lugged coolers, lawn chairs and picnic blankets to Wolf Trap Friday evening – the dads wearily guzzling beers from plastic cups, the moms sipping spiked seltzers – apparently feel similarly. With many parents wearing JoJo merch themselves – whether of their own volition or not – the scene resembled a cheerleading camp, a sweeping tide of bows clipped onto ponytails, shirts, high-top sneakers and baseball caps.

"I do my best to make the girls happy," said Jon Blankenship, who had donned a swirly white bow to the delight of his three daughters. His wife was home sick with pneumonia, so as her replacement, he joked, he wanted to at least look the part.

When the line for souvenirs opened up before the show, parents swarmed into two haphazard lines that extended past the shade and into the blazing midafternoon sun. They hoisted their kids up to survey the available merchandise. "I want the blue T-shirt!" a girl in a pink tutu yelled to her mom, stomping on the deadened grass excitedly.

With her boundless high-ponytail enthusiasm and "come back like a boomerang" positivity, JoJo mostly draws a fan base on the younger side – when life is still sunshine and rainbows. With 9 million subscribers to her YouTube channel, JoJo needs only one gentle algorithmic push to materialize on a child's screen.

Parents say JoJo seemed to pop up in their lives randomly, usually through a YouTube Kids suggestion that a child clicked on.

"My oldest found her online and from there, they all got into JoJo," said Dyana Clarke, a mother of three girls. Her youngest hopped sporadically to the beat of the song "BOP!" surrounded by a group of flailing toddlers. Clarke speculated that JoJo's music and personal style will evolve over time "into something campy like Lady Gaga."

Her oldest daughter, Jocelyn – the family's first JoJo fan – roamed around their space on the lawn, bored and bow-less. Since she turned 9, her fondness for JoJo has waxed and waned. "I still like JoJo," Jocelyn said, "but I'm not crazy about her like I used to be." She shrugged: "I just found more music and different artists that I like now."

Yet JoJo is inescapable when you're 9. Most of her friends, especially the younger ones, still fawn over her music videos; her classmates wear JoJo's line of sparkly Target clothing and throw JoJo-themed birthday parties.

It's fair to say the JoJo phenomenon isn't exactly about the music. The star launched to fame at age 10 via the Lifetime reality show "Abby's Ultimate Dance Competition," and soon she and her mother, Jessalynn, were personalities in their own right, thriving on the catty backstage drama of its sister program "Dance Moms." By 2016, she had segued into a pop career, in the mold of Disney stars half a generation older – think Hillary Duff and Selena Gomez – who slid into music after a successful TV stint.

But JoJo, with her "Dance Moms" days behind her, doesn't have or need the platform of a television series anymore. Though Nickelodeon has since signed her to a deal that has included a TV special and an animated Web series, JoJo largely reaches her fans via YouTube – a vehicle not only for her music but the fabulous world of JoJo-branded products. (In two separate videos - one filmed at a Target and the other at a Walmart – we see JoJo scouring the aisles to find all the JoJo goods for sale. One video runs for seven minutes, the other for 12 minutes.)

And while her rise appears to be marked by a combination of many things - luck, YouTube Kids' peculiar algorithms, her earworm singles – JoJo is a highly intentional teenage celebrity.

"I always knew this was what I've always wanted," she said on the "Today" show in May. "I always knew that somehow, some way ... I was going to get it." Way back in 2013, on the second season of "Abby's Ultimate Dance Competition," her mother notoriously declared, "I would say it's my mission in life to make JoJo a star."

Today, JoJo – who was not being made available for interviews on this tour stop – is a surprising 5-foot-9, and her still childlike voice is growing a little raspier. As a 16-year-old who dresses like a unicorn-obsessed toddler, she has attracted some fairly nasty online attention. Justin Bieber once told her to burn her rainbow customized BMW (and apologized after). Teenagers gain thousands of likes by mocking her clothing line on TikTok. Internet comments savagely roast her receding hairline.

Yet she seems to have handled the ugly side of fame with surprising grace. She limits comments on her social media and disables them on her YouTube videos, stating that she doesn't want her young fan base to be exposed to "bad language" online.

"That's what makes her so inspiring to me," said Emily Cuthbert, 15, who has followed JoJo since her "Dance Moms" days. "I'm an unironic fan, and I think she's a great role model to these young girls."

Cuthbert's hair, which was tied into two bouncy space buns atop her head, was streaked with pink and teal. She wore a bright Hawaiian blue shirt, printed pineapple shorts and a fanny pack - a ridiculous outfit for a casual night out, but perfect for a JoJo Siwa concert.

"Do you think JoJo can see me?" asked a tutu-wearing toddler, pointing to the speck that is JoJo onstage. Her mother suggested they wave, and suddenly, serendipitously, JoJo belted out, "I love you guys!"

The toddler kept waving, mesmerized. The entire arena shook with a chorus of 1,000 piping voices: "I love you JoJo!"

As soon as today, senators will have two options on how to change the primary election happening next month, in the midst of the COVID-19 pand… Read more

Some of our freedoms are taken for granted

As I sit here at my desk on the Fourth of July, there are so many thoughts running through my mind relative to the freedoms we have as America… Read more