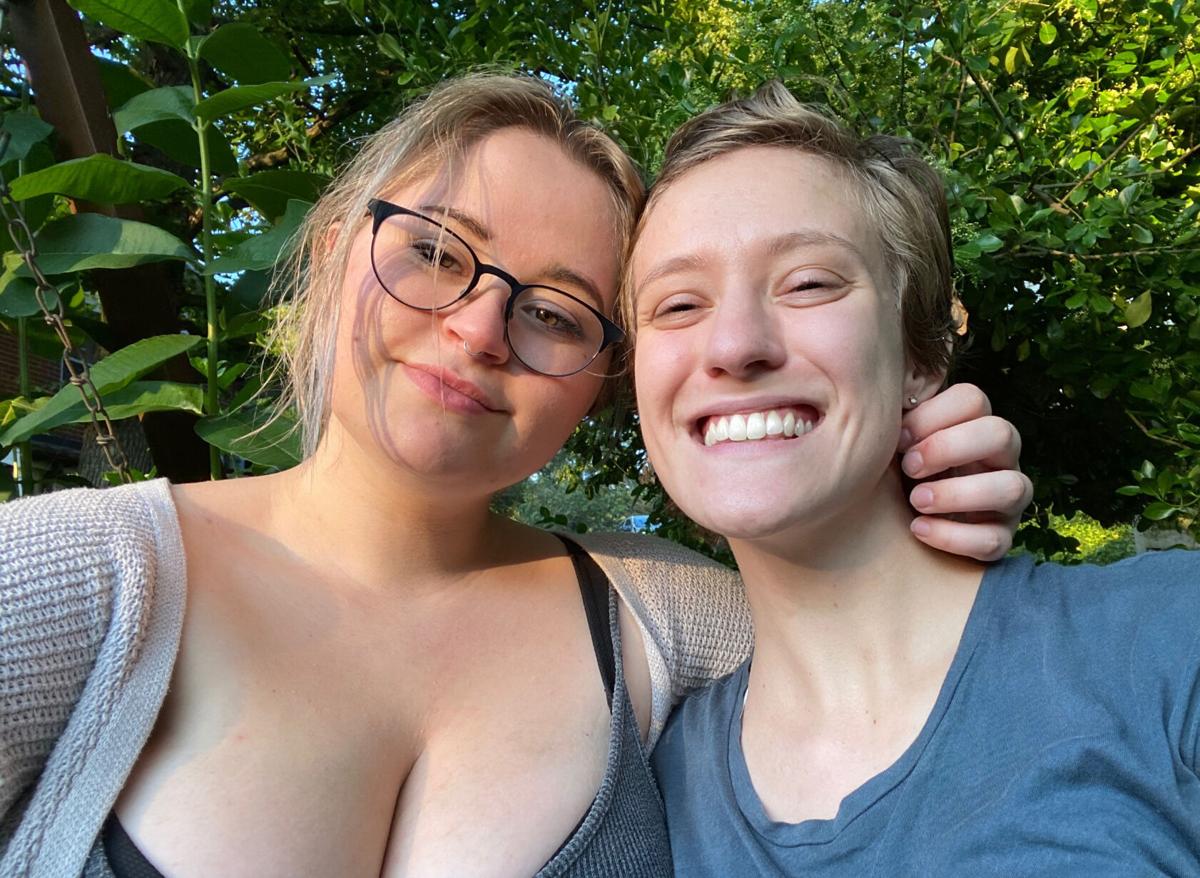 MEET CUTE: Rin Ryan, left, and Elaina Perry's relationship started on Instagram. After months of phone calls, they met in person in late May. Photo by Rin Ryan 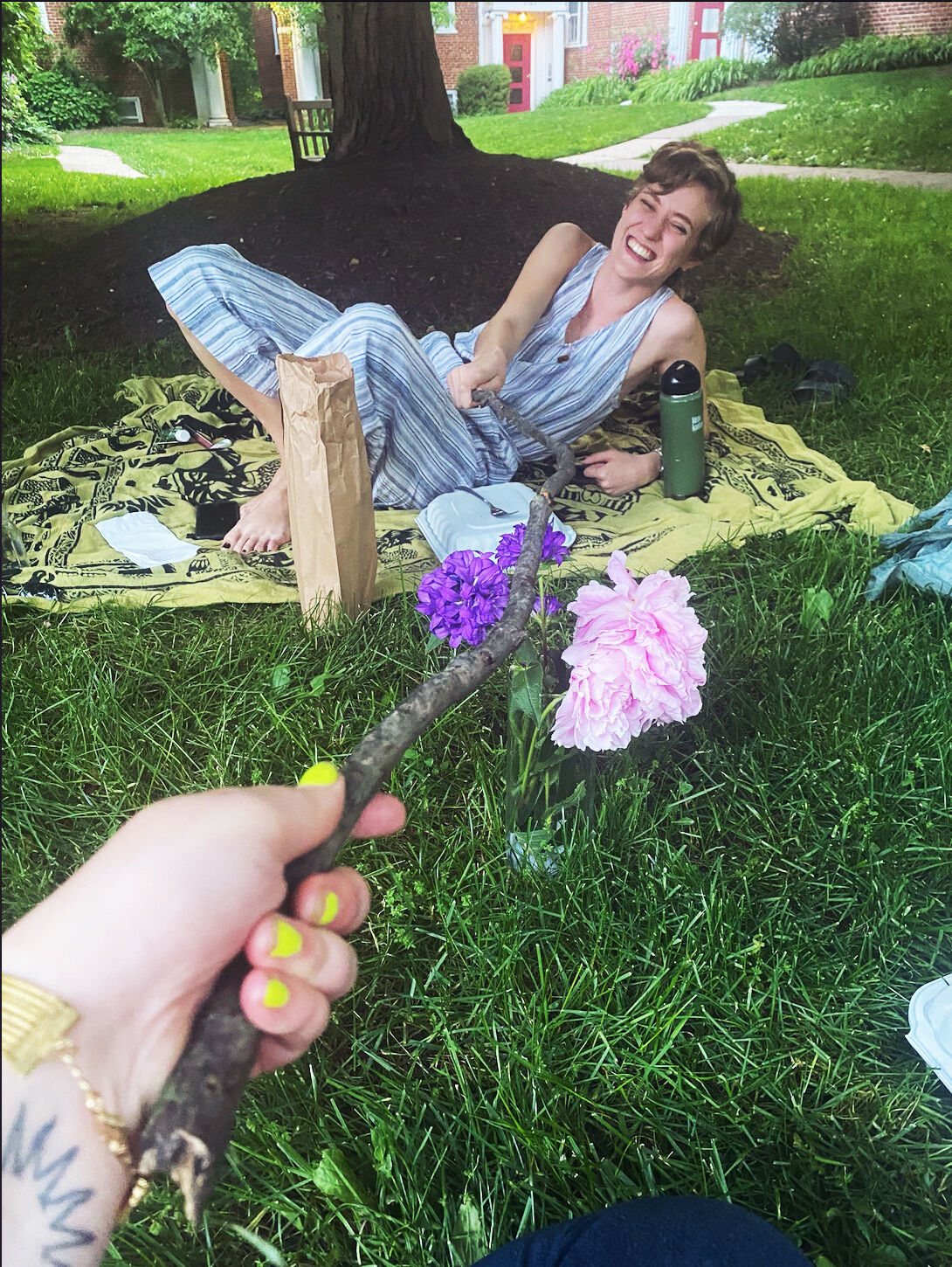 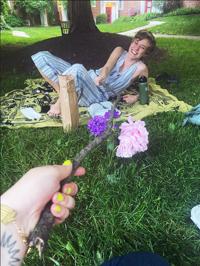 'A REALLY CUTE WAY TO GET TOGETHER': Rin Ryan, not pictured, uses a branch to "hold hands" with Elaina Perry on their first date in late May. Photo by Rin Ryan 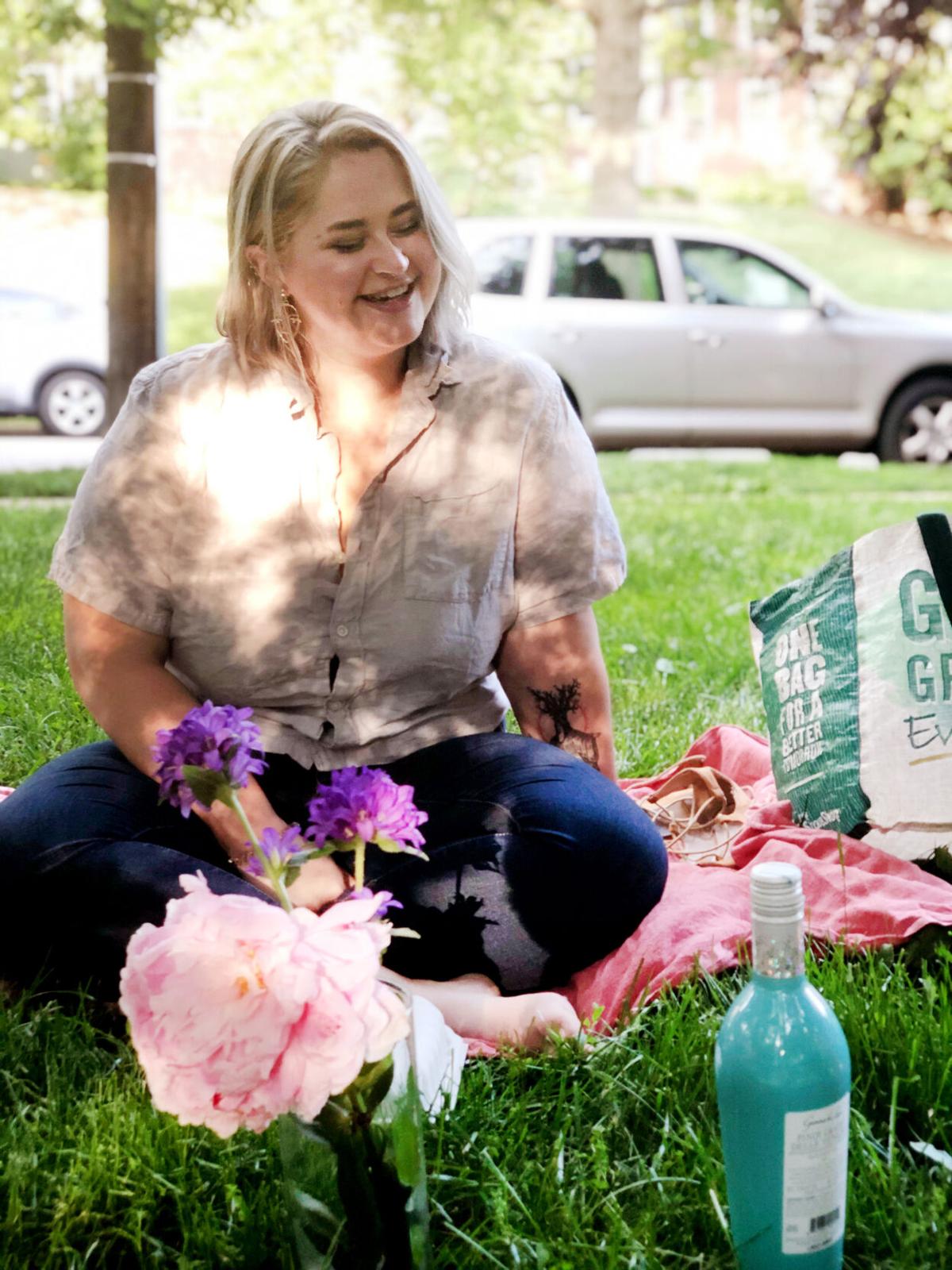 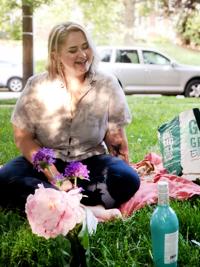 MEET CUTE: Rin Ryan, left, and Elaina Perry's relationship started on Instagram. After months of phone calls, they met in person in late May. Photo by Rin Ryan

'A REALLY CUTE WAY TO GET TOGETHER': Rin Ryan, not pictured, uses a branch to "hold hands" with Elaina Perry on their first date in late May. Photo by Rin Ryan

How does a relationship blossom during a lockdown? Before the pandemic, Elaina Perry, 22, then a senior at American University, and Rin Ryan, 21, then an AU junior, knew of each other but didn't know each other. Elaina listened to Rin's podcast, "Bisexualitea," and they occasionally commented on each other's Instagram posts. In March, those Instagram messages led to phone calls. And in late May, they got to meet in person.

The Washington Post talked to them about how they built a relationship while hundreds of miles apart, amid the uncertainty and heaviness of the pandemic. The following interview has been edited for clarity and length.

Question: How did you meet?

Rin: When I got pulled back from my study abroad program in Scotland and Elaina got stuck in quarantine, we ended up connecting over Instagram. I was quarantining with my family in Massachusetts. Now I'm back in D.C.

Elaina: When we started talking in March, I was talking to other people. I wasn't trying to do anything monogamous. For May and June, I moved home to Prince George's County in Maryland. Now I live in a townhouse in D.C.'s Petworth neighborhood.

Q: How often were you talking?

Rin: I would wake up and text Elaina. I would go to bed, texting Elaina. We would call each other on our breaks. We watched movies together. I made Elaina watch a series I like, and she made me watch a series she liked. We took each other of Google Maps tours of our hometowns.

Elaina: But then as soon as you moved back to D.C., we did a distanced picnic as our first real date.

Rin: We were sitting, like, on separate blankets with candles and flowers. Every family that walked by would be like: "This is a really cute way to get together."

Q: Elaina, you said you were dating other people in the beginning. When did that change?

Elaina: A few weeks in, I decided that I didn't want to talk to that many other people and Rin had voiced concern about it. One day I decided to cut off everyone else. But after I did that, Rin sent me this text that was like: "Hey, would love to meet up whenever you're back in D.C. and be friends. But I don't want to talk anymore because you're talking to other people."

Rin: I'm a monogamous kind of person, and I didn't think Elaina wanted that.

Q: If you're not seeing each other in person, why was monogamy important?

Rin: Elaina and I were having conversations that were really emotionally and romantically intimate. Even if we weren't together in person, I decided: "I want you to be my only person that I'm doing this for. And I want to be your only person."

So (after that text) we had a conversation where we decided: Let's move toward what could be a relationship and let's take steps toward that, but let's not hold each other captive in our feelings for each other.

Q: College students like yourselves are known to be hooking up before talking about anything serious. What was it like to do things in reverse?

Rin: Definitely not what I'm used to.

Elaina: No. But it was really nice. We have the comfort and trust that I've built in previous relationships that were maybe twice as long.

Rin: We had the opportunity to learn each other as individuals.

Q: How did you build that comfort and trust?

Elaina: We shared our frustrations and sadness. During the pandemic, we both felt stuck as our life plans changed.

Rin: I lost job opportunities. I got pulled back from study abroad. I tell Elaina that she's the good thing that came out of all of this for me.

Q: When did you touch for the first time? A lot of new couples are navigating that right now.

Rin: It was only a few days. The first date was distanced and then we gave in shortly after.

Elaina: The most nerve-racking time was when we had to sit across from each other on those blankets and not touch.

Rin: We were both very, very nervous to hold each other's hand or kiss, because there had been so much buildup.

Q: What were you nervous about?

Rin: I wasn't nervous about catching covid. I was thinking: OK, we feel like there are romantic sparks between us. But are we going to click, or is it going to feel like I'm kissing my best friend? I was worried that she would kiss me and be like: "Oh, you know what? Actually I changed my mind."

Elaina: Not being able to test that out for two months was a little scary.

Rin: I felt like we had been courting. But then when we actually got to be together and hold each other, it just felt very calm and right.

Elaina: You're gonna make me cry, but yes – agreed.

Q: Are there certain qualities you got to see in one another that might not have been revealed as quickly if you were dating in another period?

Rin: Elaina, you're immensely patient with me and my anxiety. Any time I start to freak out, you're very willing to be the voice of reason.

Elaina: Rin is one of the most emotionally competent people I know. I don't think I've been able to date someone that I thought could take on such a provider role for me. I can be calm and patient with others, but I don't always necessarily expect that in return.

Q: What advice do you have for other people who are dating right now?

Elaina: Find things that you can share. We always send each other podcasts. We sent each other books in the mail.

Rin: We wrote each other full letters and mailed them. I sent Elaina poems with a wax seal stamp on the envelope. I sent Elaina coffee when she was having a hard day. And then my dog died, and Elaina sent me a bottle of my favorite bourbon.

Q: You both dealt with disappointments relating to study abroad programs or internships getting canceled. How did you help each other through those?

Rin: When I lost a summer internship in Nashville and Elaina decided not to go to grad school, we both did a really good job of putting ourselves second. Elaina didn't say to me: "Oh, I'm so happy you're not going to Nashville, because now we get to be together." She said things like: "That was a wonderful opportunity. But you will rise again. You got it because you're talented and strong. I'm more than happy to help you look for other opportunities." That was pretty huge to me.

Elaina: Rin is really good at reminding me that people aren't valued by their economic and professional status alone. That's been really grounding.

Q: What will you take from this period that will serve you well in the future as a couple?

Rin: Problem solving and enforcing boundaries. Saying things like: "Oh, you know, I don't think that's safe." We've gotten used to keeping each other in line, and doing that with compassion and care and not taking things personally.

Elaina: We've learned that we have so much fun together with one another, just talking and being in nature and doing nothing. Sure, we're both very social, outgoing humans. But if I can bond with Rin in this way, then there's so much more happiness ahead.