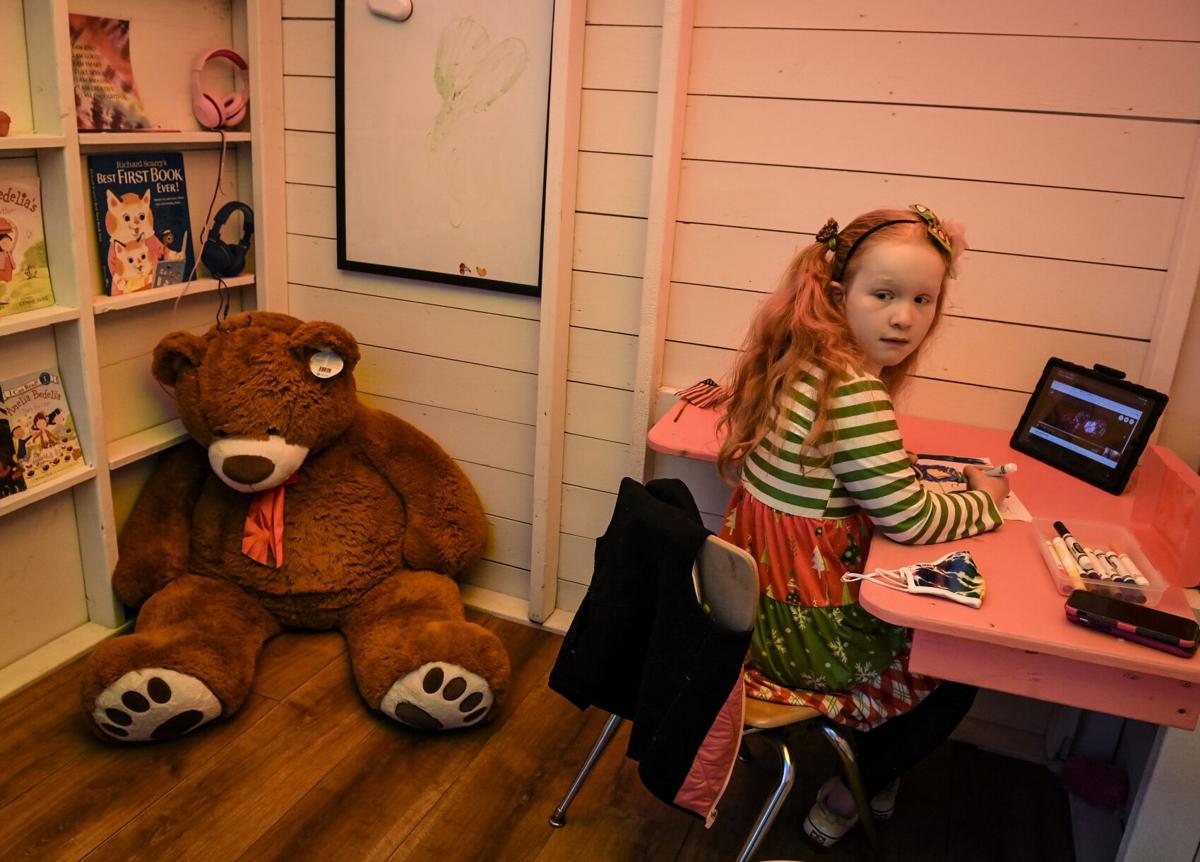 A HAVEN: Ixel Blandon McIntire, 8, at work at her desk in the backyard schoolhouse that her parents built with help from their neighbors in Arlington, Va., on Sept. 22. Bill O'Leary/The Washington Post 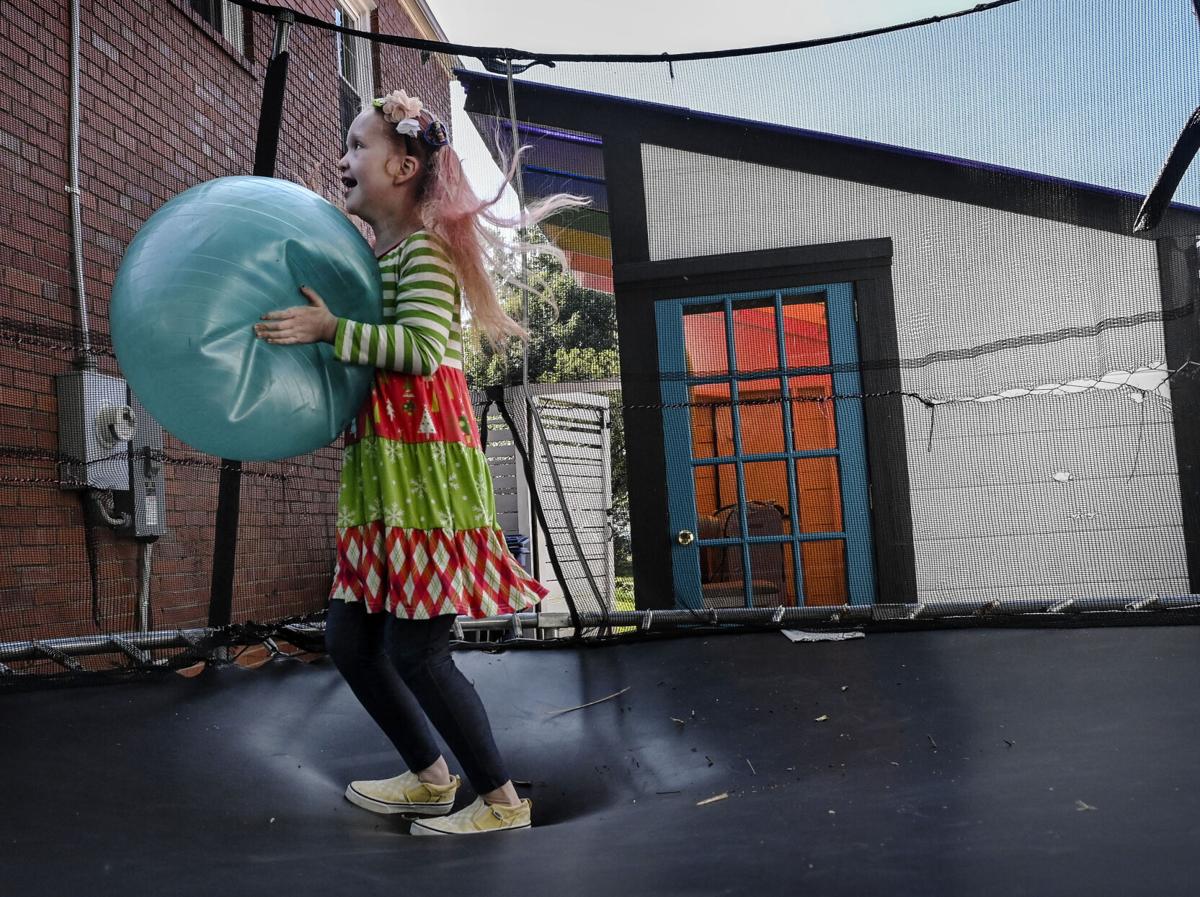 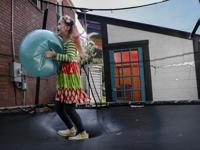 A RECESS: Ixel Blandon McIntire, 8, who is leaning disabled, takes a break from school on a trampoline at home in Arlington, Va. on Sept. 22. Bill O'Leary/The Washington Post 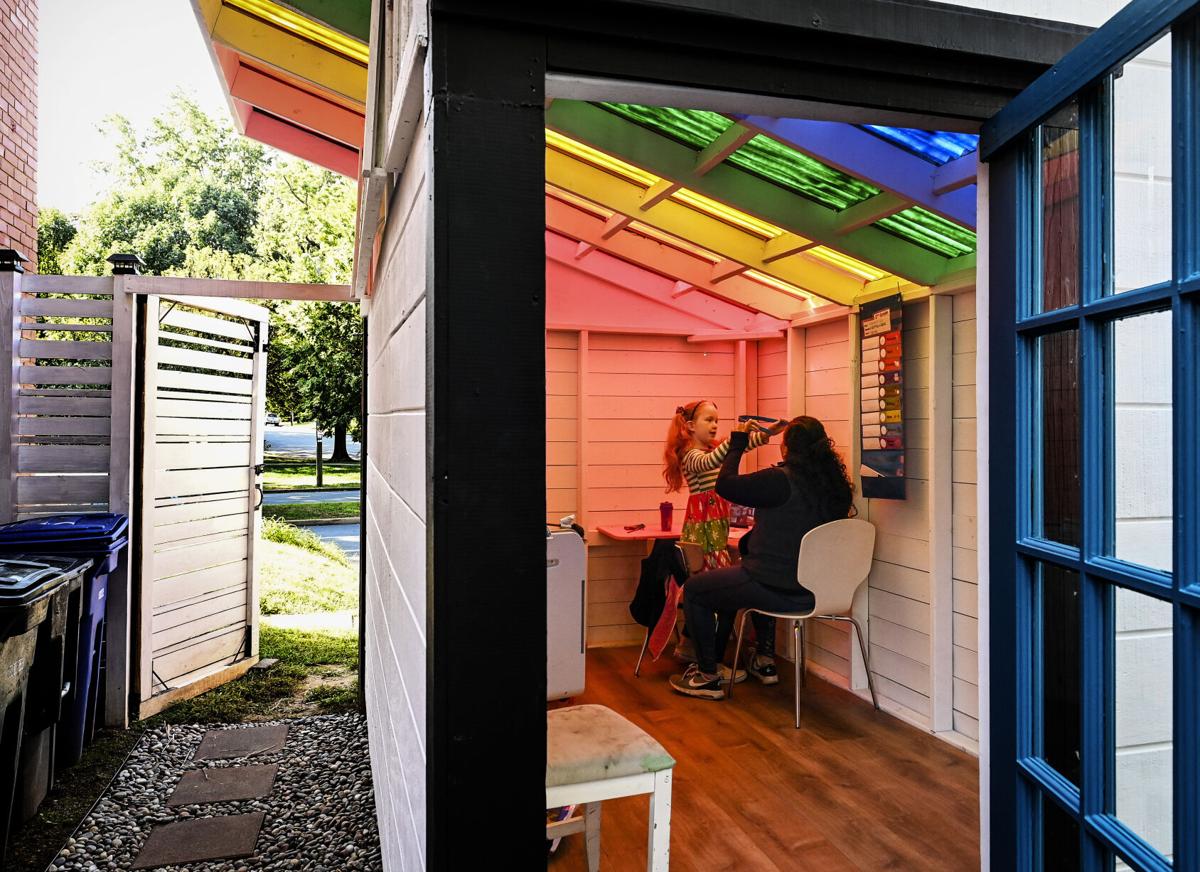 SUITED FOR HER NEEDS: Ixel Blandon McIntire, 8, works with mom Ixi Barrios Blandon in a custom backyard schoolhouse in Arlington, Va. on Sept. 22, 2020. Neighbors contributed to the schoolhouse for Ixel, who has learning disabilities. Bill O'Leary/The Washington Post

A HAVEN: Ixel Blandon McIntire, 8, at work at her desk in the backyard schoolhouse that her parents built with help from their neighbors in Arlington, Va., on Sept. 22. Bill O'Leary/The Washington Post

A RECESS: Ixel Blandon McIntire, 8, who is leaning disabled, takes a break from school on a trampoline at home in Arlington, Va. on Sept. 22. Bill O'Leary/The Washington Post

SUITED FOR HER NEEDS: Ixel Blandon McIntire, 8, works with mom Ixi Barrios Blandon in a custom backyard schoolhouse in Arlington, Va. on Sept. 22, 2020. Neighbors contributed to the schoolhouse for Ixel, who has learning disabilities. Bill O'Leary/The Washington Post

WASHINGTON - Just before school on Tuesday, as she does every morning, 8-year-old Ixel Blandon McIntire sat down to a laminated list of seven three-word sentences.

"I am kind," read the second-grader, who is a special-needs student, as her mother followed along over her shoulder. "I am good. I am smart."

Then the fourth, her favorite of the "self-affirmations" Mom asked her to come up with: "I," Ixel said firmly, "like school."

That was not true just a few months earlier. Throughout the spring, Ixel struggled to learn online at a tiny kitchen table inside her parents' 850-square-foot suburban Virginia home, while Mom and Dad worked nearby. The second-grader's learning disability makes it difficult to focus, so she got almost nothing done, despite the best efforts of her Arlington Public Schools teachers - and neither did her parents.

But now, Ixel was sitting in a miniature green-and-white wooden schoolhouse, set on cinder blocks just to the side of the McIntires' home. Her school-provided iPad rested on a desk painted hot-pink. Her long red hair, split into two high ponytails, glimmered in the light that filtered through the rainbow-colored, semitransparent ceiling. In one corner sat a child-sized stuffed teddy bear: Ixel's reading nook.

The shed - which Ixel calls her "Rainbow Elementary School" - was the result of months of labor by her father (helped by Ixel and her mother), who built the 8-by-12-foot structure from scratch. And John McIntire paid almost nothing: In a collaborative process that the McIntires and their neighbors said provided a lifesaving dose of community and cheer, the entire neighborhood came together to crowdsource the supplies he needed, whether spare wood, old paint or greenhouse-style windows cast aside during a neighbor's renovation.

"You know when the Amish community gets together to build a barn? How they all show up and help and are supportive?" said Susan Thompson-Gaines, 54, who lives close by the McIntires. "It was pretty much like that."

Ivanna Hardman, 38, who lives a half-mile's walk from the Rainbow Elementary School, said helping build the McIntires' schoolhouse - she contributed wood for Ixel's desk - changed how she sees her neighborhood.

"Before we were just here, and we didn't know anyone," Hardman said. "But through building this school, we started interacting with each other, and bonding."

Recently, Hardman said, some neighbors got together to bring food to a pregnant woman. Right after that, another group of residents donated toys to a family whose son had broken his leg.

"It's become this community now," she said, "and that's our community school."

McIntire said people used to stroll by their home and pause to wonder at a food truck, "Mac's Donuts," which the couple shut down last spring due to the pandemic (although they have recently revived it). Now, McIntire said, the main attraction is the schoolhouse.

Passersby spot the rainbow roof and stop to ask questions: What is that? You actually built it yourself? Some, McIntire said, walk away with their own plans to construct a schoolhouse. He and his wife, Ixi Barrios Blandon, have made new friends this way.

"Originally the only point of this was Ixel's learning," Blandon said. "And then it became fun."

Inside, Ixel does not notice any of it.

From the moment she sets foot in the Rainbow Elementary School, the 8-year-old is zeroed in on school. Blandon insisted that the inside of the building be painted pure white - and that the only windows sit six feet up - to prevent distractions.

On Tuesday morning, Ixel rose with the rest of her class, identifiable only as small rectangles on a video call, to recite the Pledge of Allegiance. Her mom, whose turn it was to observe online school (McIntire and Blandon trade shifts), rose, too.

"One-nation-indivisible-with-liberty-and-justice-for-all," Ixel mumbled in a rush, then sat back down to continue sketching a butterfly as her teacher explained that the class would learn how to use three new iPad apps that day.

Seconds too late, McIntire walked over from the house and poked his head inside to offer his daughter a small American flag, attached to a wooden stick with turquoise tape.

"Gosh, we don't have any heat in here, do we," McIntire said, shrugging his shoulders as he ducked back into the chilly September air. "Gotta figure that out. That's next month."

Even if it is a little cold, Rainbow Elementary feels like real school, Ixel said later. It helps that the family keeps a large trampoline adjacent to the shed. During breaks, Ixel heads straight outside to exercise away her excess energy, just as she used to do on the playground at recess.

Watching her bounce, McIntire said he never expected this level of success when he first posted in a neighborhood "Buy Nothing" Facebook group over the summer.

"Looking for scrap wood," he wrote in July. "The goal is [to] build a shed to use as a schoolhouse this year."

McIntire knew he would not be able to buy a shed - online research revealed that would cost at least $2,500. It had hurt to lose the food truck income, and Blandon's work as a project manager for a translation company had slowed because of the pandemic. McIntire had kept his job working with the Peace Corps, but the family could not afford to spend several thousand building a schoolhouse.

Then the offers began flooding in: Someone had cinder blocks. Someone else had an extra door. Still another person was looking to get rid of their spare buckets of black paint.

Late in the summer, Thompson-Gaines dropped by the McIntires' house with a surprise: Four cups, decorated with a special, customized "Rainbow Elementary School" slogan. Two of them read "STAFF," for McIntire and Blandon.

Two of them read "STUDENT" - for Ixel.

McIntire finished building the schoolhouse just before class began on Sept. 8. By then, dozens of neighbors were tracking every update the family shared in the Facebook group. McIntire's last post, revealing the finished building, drew hundreds of likes and comments.

"It's so beautiful," one person wrote.

"I'm so glad you posted a picture," wrote another. "I was wondering how it was going to turn out."

When the news gets too depressing, Blandon said, she and her husband return to these comments, scrolling slowly. It makes them feel better, she said. McIntire said the "Buy Nothing" Facebook group is the only reason he is still on the social media site.

And he has a favorite comment: "One lady posted something like, 'If I get a husband I hope he's just like you,' " McIntire said, glancing at his wife. "I'm pretty handy, huh?"

Blandon rolled her eyes and turned away, but she was smiling. She looked at her daughter, still flying through the air on the trampoline.

"Two more minutes of bouncing, then back to school," she said.

"OK!" Ixel called back. And she smiled.