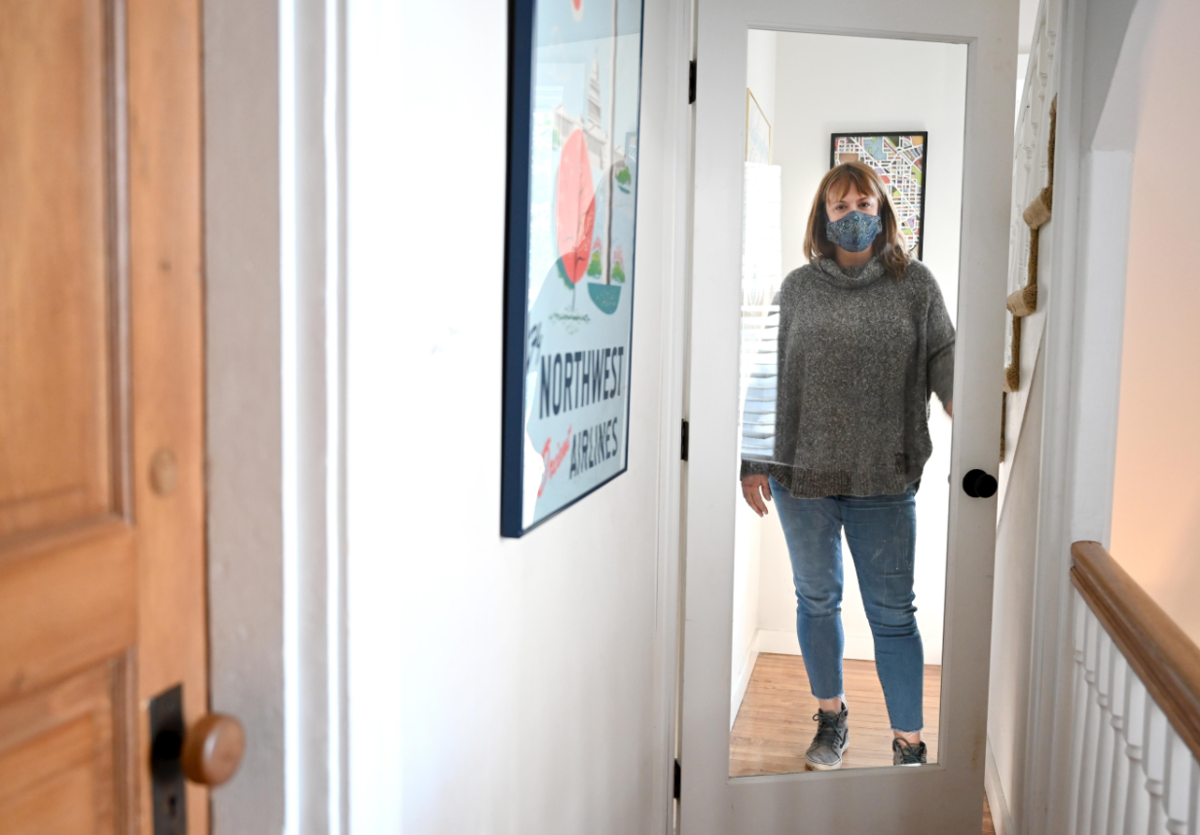 GRATEFUL: Stephanie Coleman jokingly says she is grateful for her attic door, which when closed signals to her family that she is not to be disturbed. She is photographed in her Washington home on Monday, Nov. 23. Katherine Frey/Washington Post 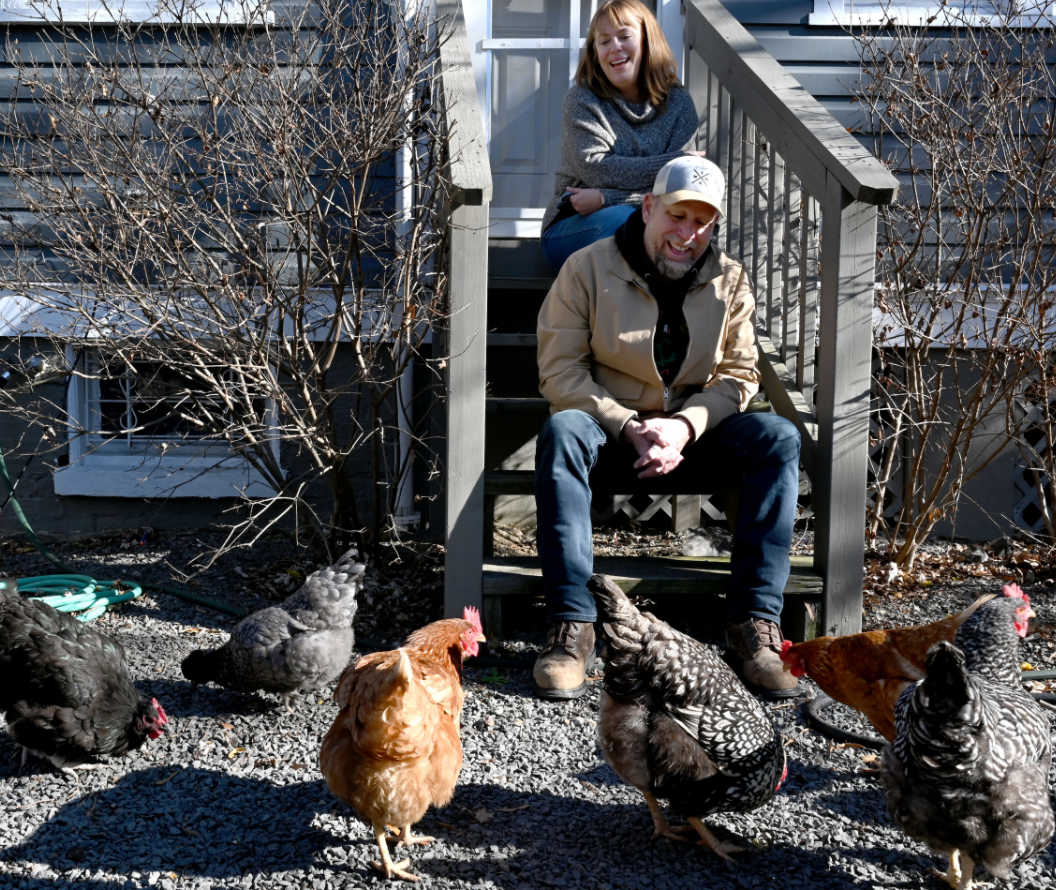 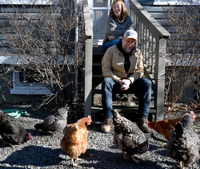 THE COLEMANS: Stephanie Coleman and her husband, Tony, watch as their laying hens forage in their Washington backyard on Monday, Nov. 23. Katherine Frey/Washington Post 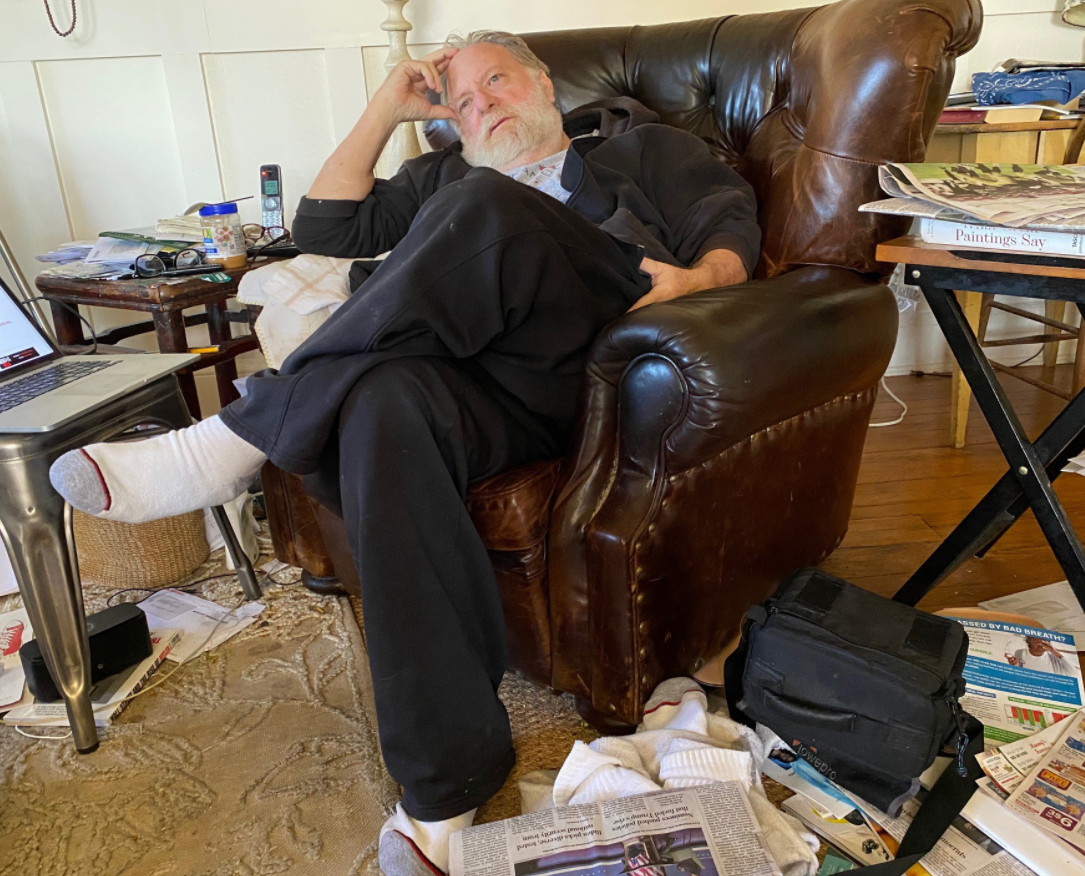 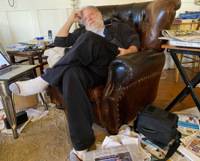 SPACING OUT: Al Jirikowic, an art critic and former District of Columbia bar owner, passes hours every day in a brown leather chair in his apartment in Washington. He calls the chair "The Churchill." Paul Schwartzman/The Washington Post

GRATEFUL: Stephanie Coleman jokingly says she is grateful for her attic door, which when closed signals to her family that she is not to be disturbed. She is photographed in her Washington home on Monday, Nov. 23. Katherine Frey/Washington Post

THE COLEMANS: Stephanie Coleman and her husband, Tony, watch as their laying hens forage in their Washington backyard on Monday, Nov. 23. Katherine Frey/Washington Post

SPACING OUT: Al Jirikowic, an art critic and former District of Columbia bar owner, passes hours every day in a brown leather chair in his apartment in Washington. He calls the chair "The Churchill." Paul Schwartzman/The Washington Post

WASHINGTON — In any given year, Stephanie Coleman can recite reasons she is thankful on Thanksgiving, a list that includes her three children, her husband, friends, extended family and the six chickens in her backyard.

She is grateful for her Honda Pilot, which she drives around her Washington neighborhood to regain the composure necessary to return to the demands of pandemic motherhood.

The holidays are that season when tradition encourages a humble tolling of all that should be appreciated, a confection of home and family and a future shimmering with promise.

But divining that list can be challenging when your home has turned into a minimum-security prison and your people – that once-fascinating partner or those once-adorable urchins – won't go away.

As with most aspects of life, the coronavirus has done a number on what deserves appreciation. The most prosaic of routines can now deliver delight. Like a bona fide night of restful sleep. Or a prolonged moment of enriching silence.

Or, say, the leather chair that Al Jirikowic, 68, an art critic and former District of Columbia bar owner, now sits in five hours a day because there's nowhere to go. The Churchill, as his throne is known, is where Jirikowic meditates, contemplates the end of civilization and figures out what to eat for lunch.

Whatever the case, he's comfortable.

"I'm thankful I can sit here and space out," he said. "You learn to like your solitude. If you don't, you go nuts."

Coleman's husband, Tony Tomelden, 54, owns The Pug, a D.C. bar that is temporarily closed. He finds himself feeling unexpected gratitude for the 5,000 records he stores in their garage.

When else would there be the chance to find a Link Wray album, put it on his dinky record player and let his head fill with rockabilly? "I have time and no money – perfect," he said.

He and his wife, a physical therapist, manage a household that includes a 9-year-old boy and 11- and 13-year-old girls, a dog, a cat and a chicken coop. Coleman wonders how people survived the 1918 flu pandemic without sharing their misery in texts to friends, as she does with three other mothers, a group that refers to itself as "the mafia."

As they texted the other day, the group listed more reasons to be grateful:

"I'm thankful I haven't killed any (of) my family members," wrote a third.

Even before the coronavirus, Rabbi Bentzy Stolik urged his congregants in Olney, Md., to begin each morning by getting "on the treadmill of gratitude," a ritual he says has grown more important during the pandemic.

"The fact that I just awoke is already something to be grateful for," he said.

To clear a path to the treadmill, the rabbi recommends avoiding the news and social media for 90 minutes after getting up.

"I'm probably going to find something to kvetch about," he said. "The more we kvetch, the more likely it is that we will continue to kvetch."

Even some of those reasons to complain – a historically ugly election season, to name one – contain a semblance of a silver lining that can be appreciated if one squints hard enough.

"There are no tanks in the streets – I guess that's a start," said John Lally, 70, an attorney who lives in Bowie, Md.

Lally said the pandemic has made him less interested in luxuries that have enticed him in the past – a trip to Europe or a new car, for example. "I'd rather have true contentment," he said. "It's like a drink of cold water on a hot day. At some point, you say, 'What a great drink of water!' "

Lauren Rothman, 43, a fashion stylist who lives with her husband and son in McLean, Va., has found a renewed sense of mission in her walk-in closet, which she turned into an office in July after her goddaughter moved into a spare bedroom.

Now, surrounded by shelves of shoes and racks of hanging dresses and suits, Rothman advises clients on what to wear while they work from home. She also helps with "identifying their best Zoom angles."

"I finally feel like I'm hitting my stride in Month 8," she said. "The pandemic pivot is in full bloom."

Derek Floyd, 34, who lives in Washington, has found a different sort of footing in his recent work as a community organizer in the city's poorest neighborhoods, where he has also handed out food and masks and helped facilitate coronavirus testing.

Two of his cousins and an aunt have died of COVID-19, the disease the virus can cause, Floyd said. He knows others who were victims of recent gun violence, including 11-year-old Davon McNeal, who was killed by an errant bullet during a shootout in D.C.

Floyd has taken up yoga and meditating and cut back on fried foods. He also made contact with an older brother with whom he had not spoken in several years, after hearing that he'd had a daughter.

"You realize that we all face the possibility of death at any moment, and this could be the last conversation I ever have," he said. "It makes you want to fix things."

Leah Crudup, 37, a legal assistant and single mother who lives in D.C., said the pandemic has given her a chance to prove that she can juggle the demands of work while caring for her 5-year-old daughter.

"It has been an opportunity for me to become a reformed spoiled brat," she said. "I'm thankful that everything came crashing down so we can get to reality. We've kept ourselves so busy that we neglected who we are."

Another coronavirus benefit: She no longer has to find excuses for not joining friends at a shopping mall, the movies or a restaurant.

"Why would you ever want to be around all those people?" she asked.

It's a question that is more common than might be expected as hosts prepare for slimmed-down Thanksgiving guest lists – potentially excluding, say, a regular whose political views can be counted on to clear the table every year.

As she anticipated a feast with only her husband and kids, Coleman acknowledged a mix of sadness and relief.

"You don't have to stress about who gets drunk and yells at each other," she said. "It will be quiet."

Except, that is, for the whining, the tattling, and those chickens.

Should the Legislature be part time? Let the people decide.

An online poll on The Guam Daily Post website asks the question: Do you agree with changing Guam’s senatorial jobs to part-time? Read more

Standardized spelling is essential, especially since our children are learning to speak, read and write our Mother Tongue as a second language… Read more