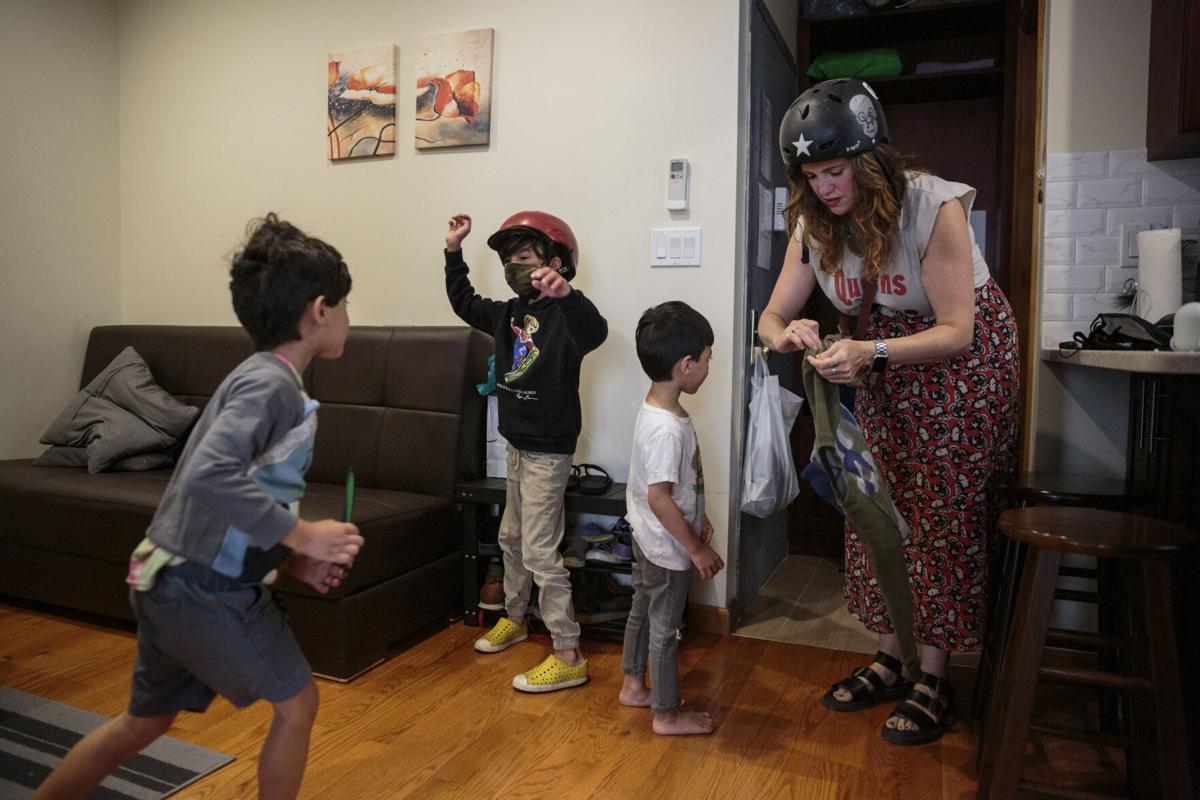 ALWAYS REACTIVE, NEVER PROACTIVE: Castro prepares her three sons to leave their apartment for a birthday party at a park. Sarah Blesener/For the Washington Post 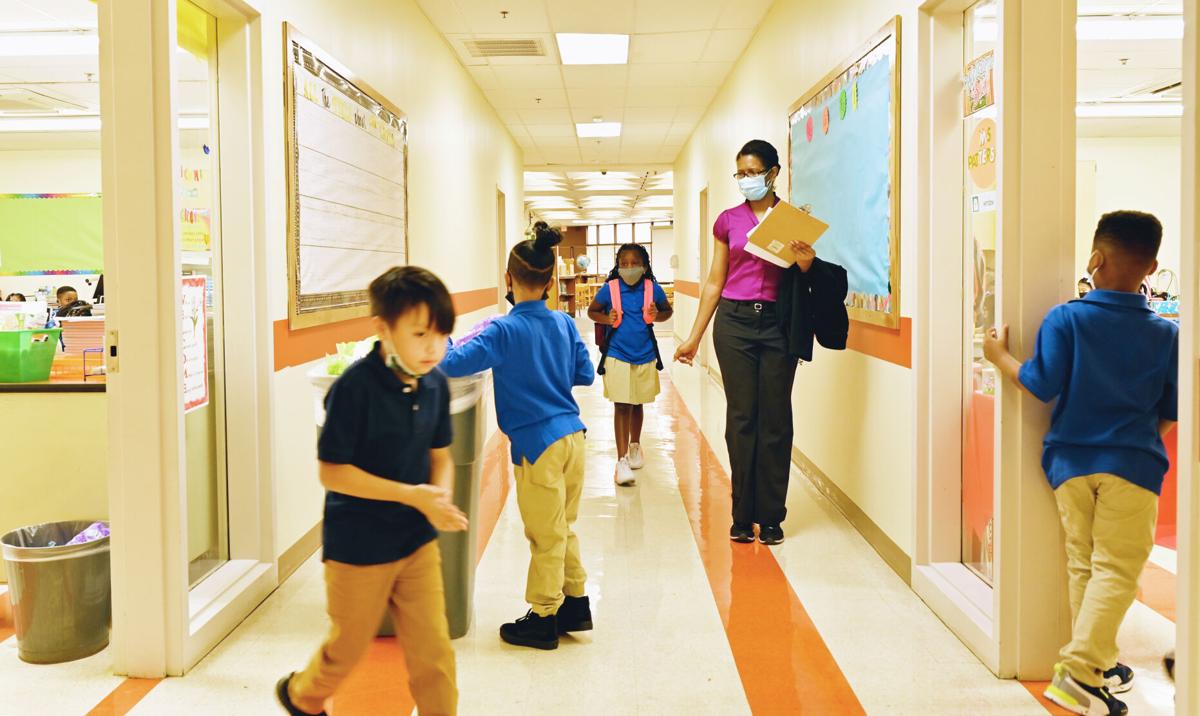 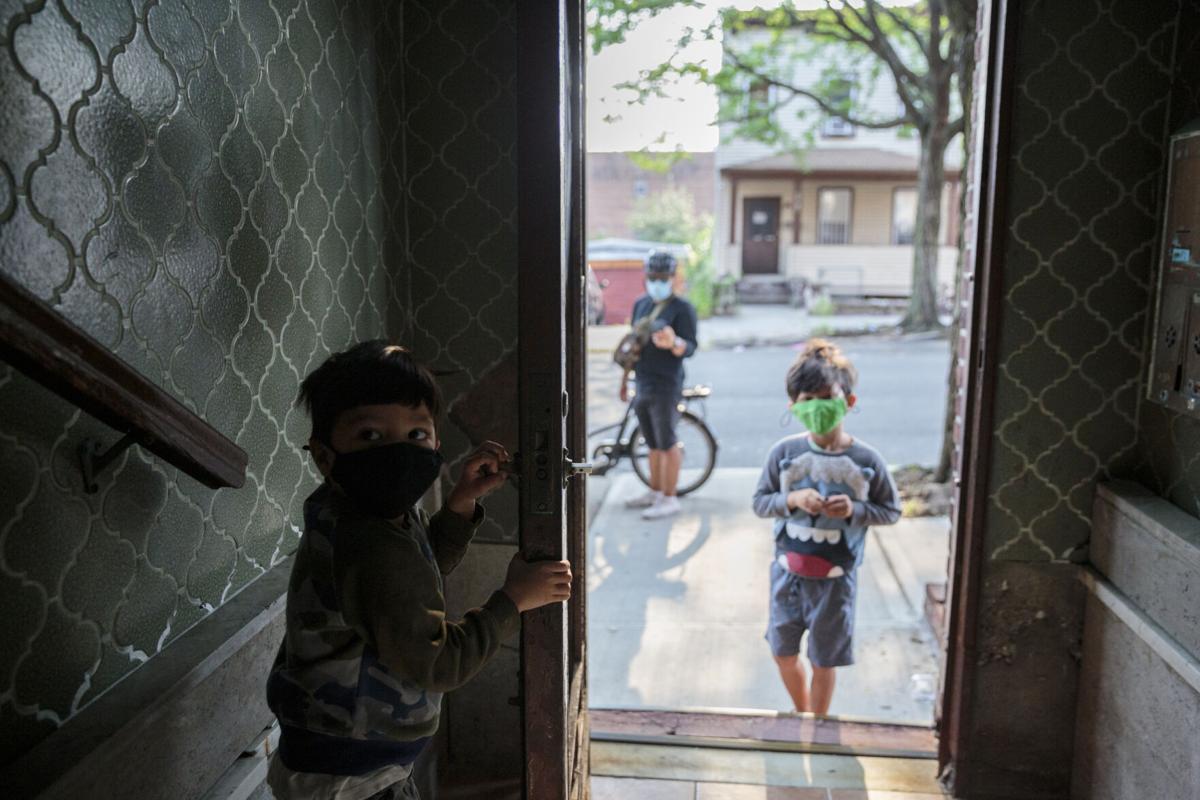 IT TAKES A VILLAGE: Bash holds open the apartment door for his mom, Bernadette Castro. Sarah Blesener/For the Washington Post 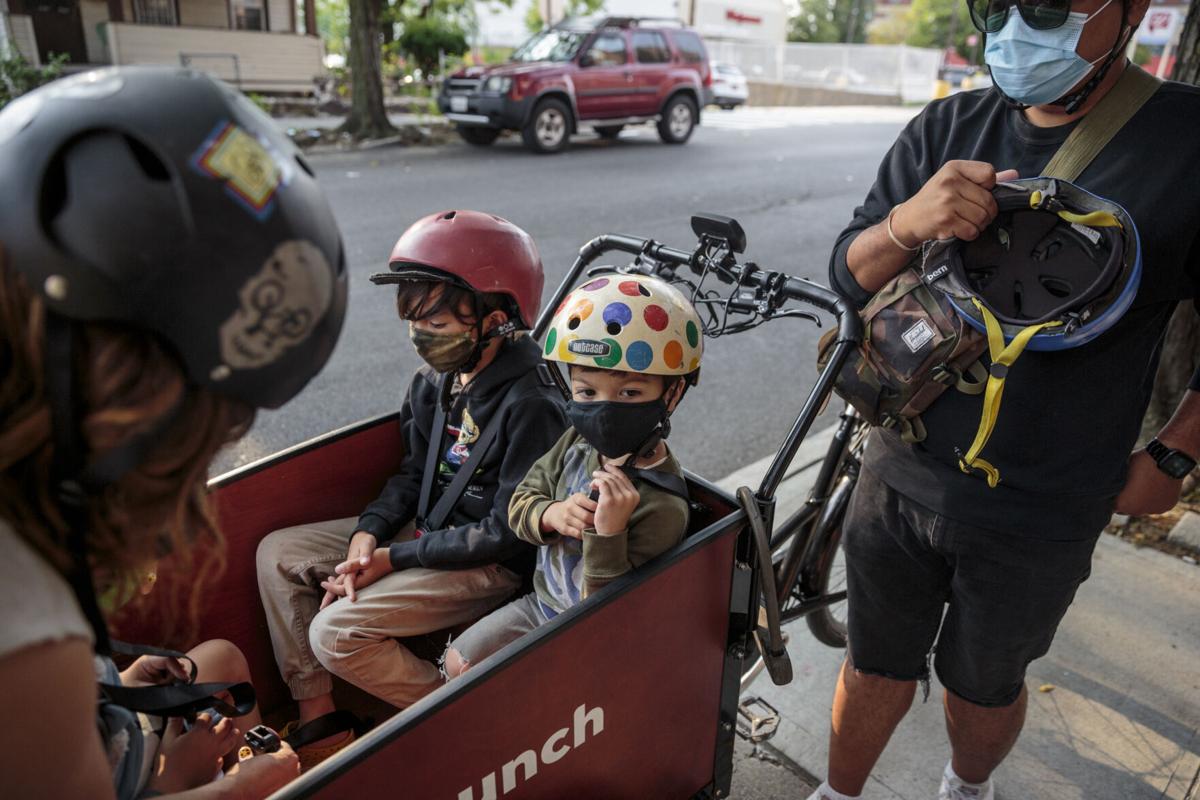 SOME SENSE OF NORMALCY: Bernadette Castro belts her three sons into a bike basket with her husband, Arsenio, before heading to a park in the Queens borough of New York. Sarah Blesener/For the Washington Post.

ALWAYS REACTIVE, NEVER PROACTIVE: Castro prepares her three sons to leave their apartment for a birthday party at a park. Sarah Blesener/For the Washington Post

IT TAKES A VILLAGE: Bash holds open the apartment door for his mom, Bernadette Castro. Sarah Blesener/For the Washington Post

SOME SENSE OF NORMALCY: Bernadette Castro belts her three sons into a bike basket with her husband, Arsenio, before heading to a park in the Queens borough of New York. Sarah Blesener/For the Washington Post.

Greg Otto conducts risk assessments for a living, but the cybersecurity consultant from Springfield, Va., never imagined he'd have to do one every time his daughter, 6, and son, 4, stepped outside the boundaries of their home. Playing with next-door neighbors outdoors? Acceptable. School? Necessary. Eating out? No way.

Dance classes where everyone's masked, and that were prepaid in June when the outlook for coronavirus infections seemed more optimistic? On the fence.

Parenting a child under 12 can be maddening and scary during normal times, but the delta variant has taken things to a new level.

With a vaccine for children ages 5 to 11 unlikely to be approved for at least a few more months, parents of young children are weighing a dizzying array of variables every day as they try to navigate the risks of COVID-19 against the mental health and physical consequences of social isolation and their own livelihood.

Breanna Contreras, 33, an intellectual property attorney whose children are 6, 3 and 20 months, said she and her husband, an engineer at Los Alamos National Lab, made the difficult decision to put all three of their children in school or day care because of their demanding jobs. But she second-guesses the choice every day.

"I feel like we're constantly reacting," said Contreras, who lives in Santa Fe, N.M. "There's not enough time to be proactive. It's like a fire alarm every day."

In Crofton, Md., Lise Dykes, a graphic designer and mother of two, ages 7 and 11, has been thinking a lot about a cartoon she saw recently that features a parent staring at a vast ocean. She recalled that it said something like: "Only 1% of the children are going to get eaten by the shark. It's fine."

Dykes, 48, said the continued reassurances by health officials and experts that children are at low risk from serious illness are difficult to relate to when you are faced with your own children. Even school, which seemed like a hopeful and sensibly calculated risk in May, she said, now feels "like an incredibly dangerous roll of the dice."

At a time when more than 75% of U.S. adults have received at least one vaccine dose and just about everything has opened up, the American Academy of Pediatrics reported over 250,000 new coronavirus infections in children just last week - the highest ever during a pandemic that is stretching into its 18th month. Nearly 30,000 adolescents and children were hospitalized with COVID-19 in August, and many are unvaccinated teens and tweens, or newborns to 11-year-olds who are not yet eligible for shots. Four-hundred sixty have died, representing 0.01% of all child cases.

The risks of long COVID-19 in children – which could include respiratory or cardiac problems, fatigue, brain fog and other symptoms that can last for months or, potentially, years – remain a big unknown. An Israeli study, one of the first on the topic, of 13,864 children published this week, found that 11% of those infected had signs of long COVID-19. Israel's Health Ministry emphasized, however, that some of the children's symptoms may also be due to prolonged lockdowns, school closures and global conflict including the fighting in the Gaza Strip.

The timeline for vaccines for the youngest Americans came into more focus this week. Pfizer CEO Albert Bourla said Tuesday that the company plans to submit data in late September seeking approval to administer its vaccine to children ages 5 to 11 and that it expects to release clinical trial data as soon as late October for ages 6 months to 2 years. The Food and Drug Administration must review the data and make a decision. The agency in July had asked Pfizer and Moderna, which make the two vaccines that use mRNA technology, to expand their trials in children following concerns about a rare heart complication in some adolescents and young people.

'This year was really rough'

After she was furloughed and then laid off from her job as a production manager for the Blue Man Group in spring 2020, she suddenly found herself at their two-bedroom home in the Queens section of New York jumping back and forth between her two older sons' Zoom classes while trying to "shhh" her youngest so he didn't interrupt the other two.

As things opened up during the summer, she was rehired by her old employer, and the family ventured out more. While she considers the family's previous indoor hangouts of the New York Hall of Science and theater off-limits for now, she said the kids have found joy in going to the park every day and climbing everything. The trickiest part, she said, is that while surfaces do not appear to be a big factor in COVID-19 transmission, it's more of a problem for younger kids like hers, who would "would lick the walls if you let them."

She and her husband bought cargo bike seats and have been biking the kids to their school, which finally opened this month.

"This year was really rough," she said. "I did like virtual therapy this year, and I've never done that before. A lot of parents struggle with finding time for themselves, but add COVID-19 on top of that, and it felt impossible for me."

A mother of four from Florida, Mary Lucia Spake has had to make some unpopular decisions for her family in recent days. The situation in her state, in which Republican Gov. Ron DeSantis has been fighting school mask mandates, has been among the worst in the nation this summer. As of Wednesday, it ranked third behind Texas and Ohio in terms of cumulative pediatric hospitalizations due to COVID-19 since July 1, according to a Washington Post analysis. The number of children hospitalized per day has jumped from about 20 a day in June to more than 100 a day in late August. The figure has fallen to about 65 in the past week.

"Having to tell my kids no to things that are good for them so many times makes me the most sad," said Spake, 48.

While Spake, her husband and their three older children, ages 19, 16 and 16, are vaccinated, her 11-year-old, Vivian, is not, which means the risks everyone else takes could affect her. Moreover, Spake was diagnosed with breast cancer, making her potentially more vulnerable to complications if she were to catch a breakthrough infection.

Pre-COVID-19, Vivian had played travel volleyball and loved it. This year, Spake and her husband had "lots and lots" of talks about whether to allow her to rejoin her team.

On the one hand, Spake recalled, they talked about how "she's been inside so long and alienated from her friends" and how "these kids have sacrificed a lot and lost a lot" already. But they also talked about how four of the 12 children in Vivian's sixth-grade class had to quarantine because of possible exposure to COVID-19 soon after the school year began. Being in the medical field – she's a home health nurse, and he's an attorney for a hospital – Spake and her husband also picked apart the latest research and local transmission data.

After many hours, they came to the conclusion that volleyball was off the table for now.

"This year is harder in some ways than last year," Spake said. "Because everyone is pretending it's all over, but it's not."

Waiting for the shoe to drop

Maia Blankenship's 4-year-old daughter, Zuri, has spent nearly half her life isolated at home during stay-at-home orders and a prolonged school closure in D.C. So Blankenship was thrilled to send Zuri off to her top-choice charter school this fall.

But her happiness has been tempered by a flurry of communications about positive cases across the city, resulting in numerous children being in a rolling quarantine.

"I'm waiting for the shoe to drop," Blankenship, 45, said. "I feel fortunate I have a job, a home, a computer and a supportive employer, but it does not change the stress I have knowing my daughter did not have a real year of school last year and how important it is for her social-emotional well-being."

Greg Otto said he feels as if life has been on hold forever, despite being vaccinated in April.

"We have no real plans, and the things we do are really at a bare minimum," he said. "We have a bubble with kids on the block. I don't do anything. My wife doesn't do anything. We kind of stick to home."

As for that dance class, he said, "to be very honest, my wife and I – I wouldn't say we've had arguments – but we've had some tough conversations about it. The risk factor is higher than it was when we signed up."

Otto did allow his children – a daughter in first grade and a son in preschool – to attend in-person school this fall, but that's because he said he has no other choice: His district closed applications for a virtual option on May 28 before delta took hold in the United States, and the family cannot afford private school.

Otto said he's frustrated by the fact that many school districts have not moved quickly to change their in-person plans in response to the surge, calling it "a stark failure, no matter how you politically view the pandemic."

"We've been pushed into a situation that is terrifying," he said, "and I feel like it's unfair, and I don't feel it has to be unfair."

Family violence offenders must be stopped. The community can help by speaking up.

The number of reported family violence cases this year is close to 300, which is nearly the total for all of last year and the year before. Read more

Deciding who guards the guardians

While I won't quote the Latin language, the Roman poet Juvenal in his "Satires" asked, “Who guards the guardians themselves?” In the public se… Read more