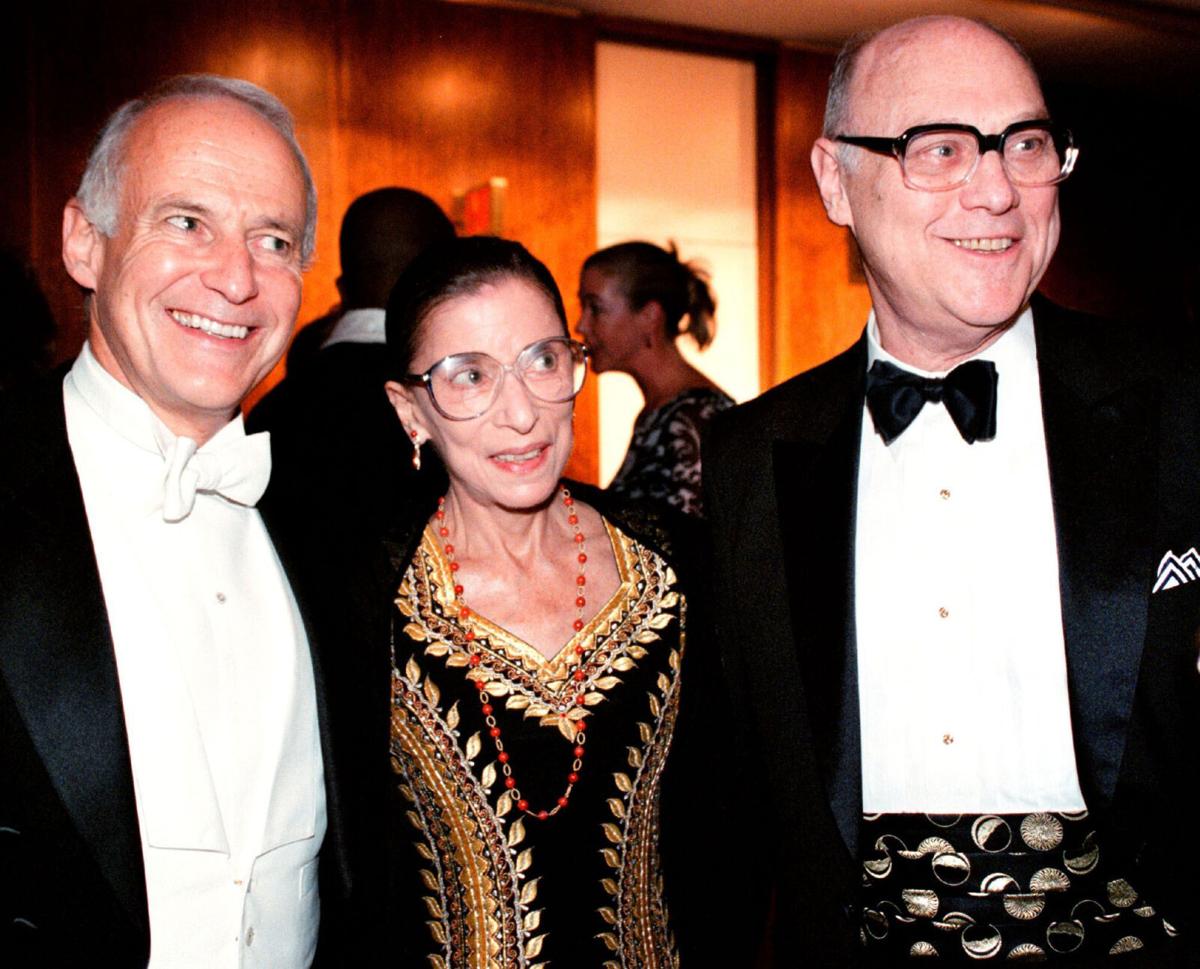 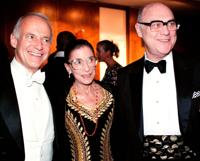 KENNEDY CENTER: Ruth Bader Ginsburg, center, with husband Martine, right, and Robert Craft, opera board president, at a Kennedy Center event in 1999. Ginsburg lived nearby at the Watergate complex while her husband was a professor at Georgetown. Rebecca D'Angelo/For The Washington Post 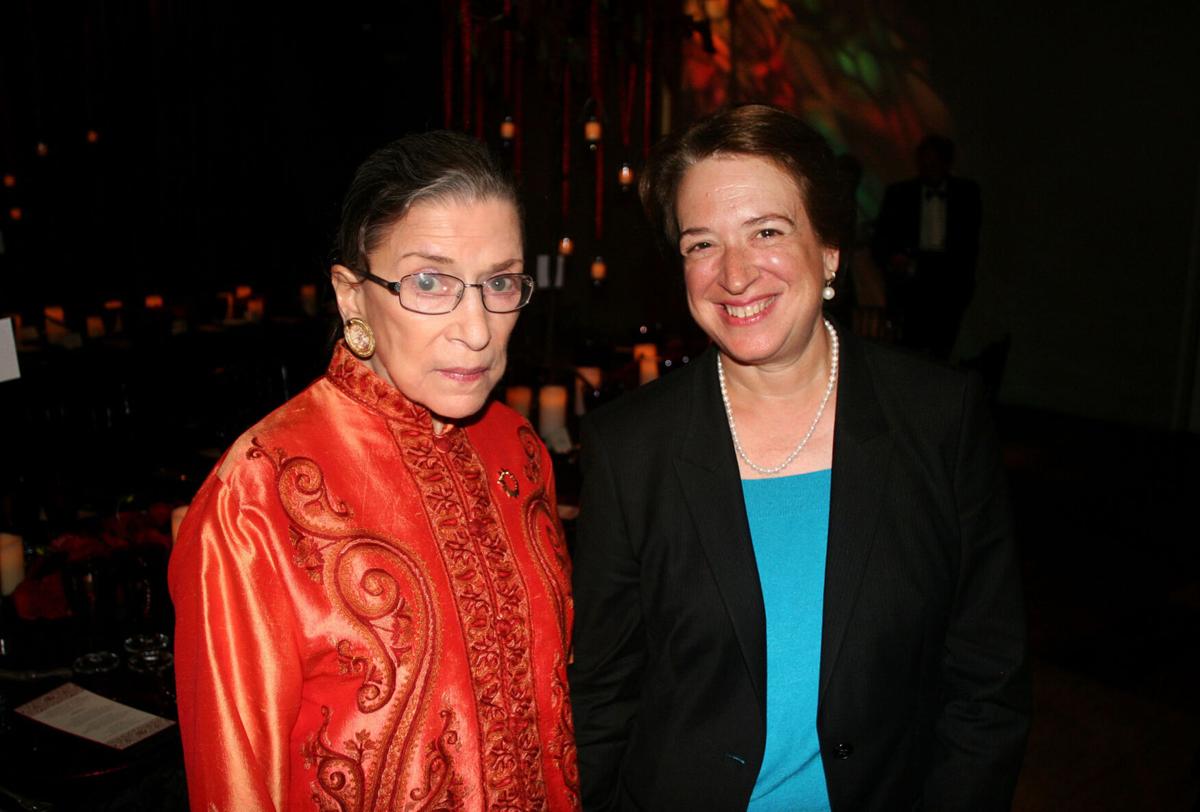 A NIGHT AT THE OPERA: Supreme Court Justices Ruth Bader Ginsburg, left, and Elena Kagan attend the opening night gala of the Washington National Opera at the Kennedy Center on Sept. 15, 2012. Ginsburg and her idealogical opposite on the court, Antonin Scalia, were both opera lovers and appeared together as extras in Washington National Opera productions. Stephanie Green/Bloomberg

KENNEDY CENTER: Ruth Bader Ginsburg, center, with husband Martine, right, and Robert Craft, opera board president, at a Kennedy Center event in 1999. Ginsburg lived nearby at the Watergate complex while her husband was a professor at Georgetown. Rebecca D'Angelo/For The Washington Post

A NIGHT AT THE OPERA: Supreme Court Justices Ruth Bader Ginsburg, left, and Elena Kagan attend the opening night gala of the Washington National Opera at the Kennedy Center on Sept. 15, 2012. Ginsburg and her idealogical opposite on the court, Antonin Scalia, were both opera lovers and appeared together as extras in Washington National Opera productions. Stephanie Green/Bloomberg

On a frigid night in January, 2003, I darted out of Signature Theatre in Arlington, Va., after a performance of the musical "110 in the Shade." I'm often the first person out of the theater - a critic's habit - but on this night I spotted an older man rushing ahead of me toward a limo, and a petite woman on the periphery of my vision, carefully negotiating an icy patch.

As it sunk in that this was the esteemed Associate Justice of the U.S. Supreme Court Ruth Bader Ginsburg, and her husband, Marty, I felt that special twinge of Washington privilege: to have witnessed a funny, unguarded moment in the life of a revered public servant. She became a real person to me in that instant, just someone who, like me, loved the theater, and was now trying to beat the post-show crush, though not at quite the pace her companion was setting.

On countless nights to follow over the years, I would see Justice Ginsburg in the theaters of Washington, on the occasions critics were invited to Arena Stage and Signature Theatre and Shakespeare Theatre Company. She was the most faithful patron of the performing arts in the upper echelons of officialdom I have ever known. Often, she was seated in front of me or just across the aisle, and I had to resist the temptation to watch her instead of the production. Or to lean over and whisper: How do you have time to sit on the Supreme Court all day and schlep in the evening to see "West Side Story?"

The answer was obvious. She couldn't stay away. That's what passion for the arts does to a person.

She loved them, and the people who make art loved her back. When the artistic directors of Arena Stage and Shakespeare Theatre, Molly Smith and recently retired Michael Kahn, married their partners, it was Ginsburg who officiated. Her captivation by opera was such that in 2016, she was cast as the comic Duchess of Krakenthorp in the Washington National Opera's "The Daughter of the Regiment." That same year, when Signature revived Stephen Sondheim and John Weidman's musical "Road Show," the props department paid a loving tribute to Ginsburg: they put her likeness on the production's faux $10 bills.

"Please tell Prop Show crew $10 bills were the highlights of today," the justice wrote in a thank-you to Signature's director of advancement and planning, Christine Stanley. "I will give one to my daughter, one to my son, and frame the third for me." Lo and behold, said Maggie Boland, Signature's managing director, "Christine saw a TV interview with Justice Ginsburg that was filmed in her kitchen - and the framed note was on her wall."

"When she loved something, she loved it," Boland observed. "She saw our production of 'Passion' three times."

She was so devoted a patron of opera, a habit that started when she was a teenager, that she became a fixture at the WNO's after-parties, staged in the Kennedy Center's Terrace Theater. Deborah Rutter, the Kennedy Center's president, said in an interview that it was the justice's practice to reflect deeply on each production she saw, and to treat performers with a fan's exuberance. "Here was she was, a superstar, and she approached each of the singers as though they were the superstars, which was so beautiful," Rutter said. "Imagine being any one of them. And they were dumbstruck."

It's not difficult to understand the magnitude of the uplift it provides for an actor or a singer or playwright or a stagehand to have the undivided, enthusiastic attention of a storied figure from democracy's control room. Or to imagine the poignancy for this ardent admirer of their work to be deprived, along with the rest of us, of live performance in the final months of her life. But while she was alive, she seemed to relish the stage, especially when she got to join in.

Kahn, founder of the Shakespeare Theatre Company, recalled a day in which Ginsburg took part in a special presentation of the "Henry VI" plays for the company's lawyers committee. She asked particularly, he remembered, to play the role of one of the rebels, which struck him as surprising. Until it got time to perform, because the part called on Ginsburg to recite the line: "The first thing we do, let's kill all the lawyers."

The law, of course, was of intense fascination for her when it was conveyed by theater. Smith said Ginsburg hugely enjoyed Arena's "The Originalist," John Strand's play that starred Edward Gero as Ginsburg's great friend, the late Associate Justice Antonin Scalia. She took delight, too, in performer-writer Heidi Schreck's Broadway hit "What the Constitution Means to Me," a play inspired by Schreck's participation as a teenager in American Legion contests about the document's amendments and some court cases that have resulted.

Schreck, in an interview by text, said that after seeing the play on Broadway in June 2019, the justice asked for a copy of the script.

"So I sent it to her, scared that she might find mistakes in it," Schreck said. "My stage manager assured me the request was symbolic; she would never read it. A week after I sent it, I got a package with a marked-up copy of Castle Rock v. Gonzales and two notes on my script."

Schreck added: "I took the notes."

One of the young actresses in the show, Thursday Williams, who engages in a nightly debate over the Constitution with Schreck, took away something even more profound from her encounter with Ginsburg. The justice invited her to Washington, to spend time in her chambers and became a mentor in the process. Now a sophomore majoring in public policy and the law at Trinity College in Hartford, Williams, 19, called Ginsburg "my powerhouse, my backbone."

"I want to go to Columbia Law School because of her," the teenager said, adding that she found a picture of Ginsburg in law school, in a sea of male faces. "I thought, 'She was the only female in that picture and it was like she was not intimidated,' " Williams added. "Because of seeing that, nothing intimidates me. Nothing."

You like to think that out of all the ovations audiences gave to Ginsburg over the years, the vibrant send-off from a young woman such as Williams makes the loudest noise.

Guam residents hold the power to vote officials in – or out

Is a teacher responsible for students’ grades?

COVID-19 funds should not be provided to 'tier clinics'

We all agree the key preparation in the fight against COVID-19 is ensuring Guam’s hospitals are well stocked and staffed. Read more