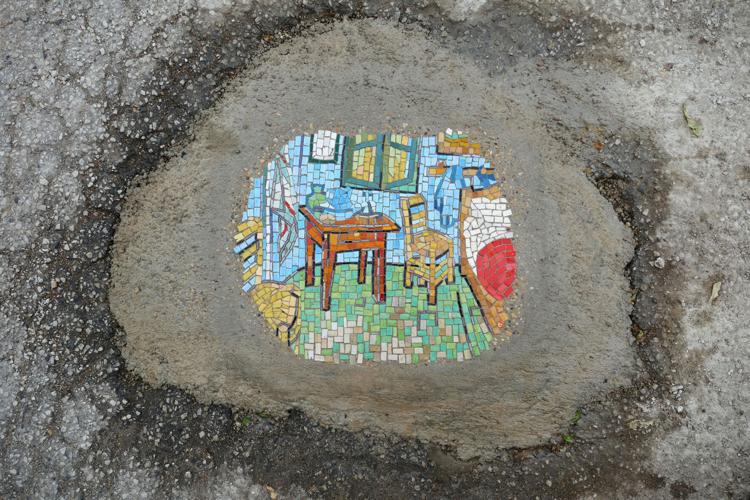 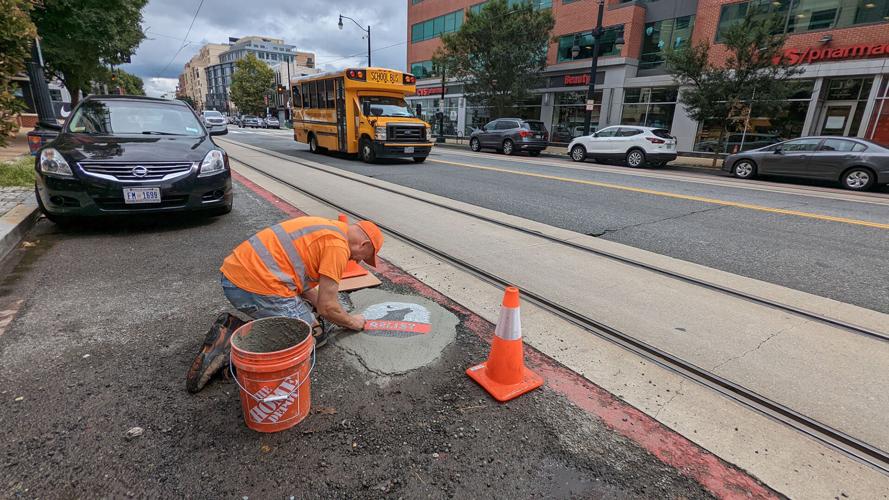 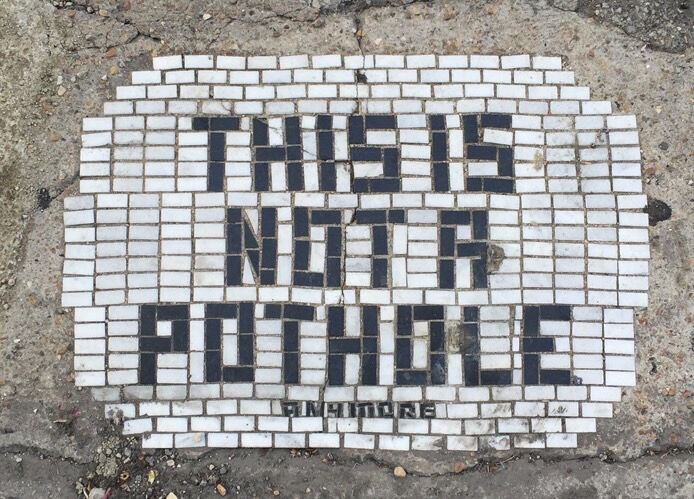 CECI N'EST PAS UNE POTHOLE: One of Jim Bachor's creations reads "This is not a pothole anymore." Jim Bachor 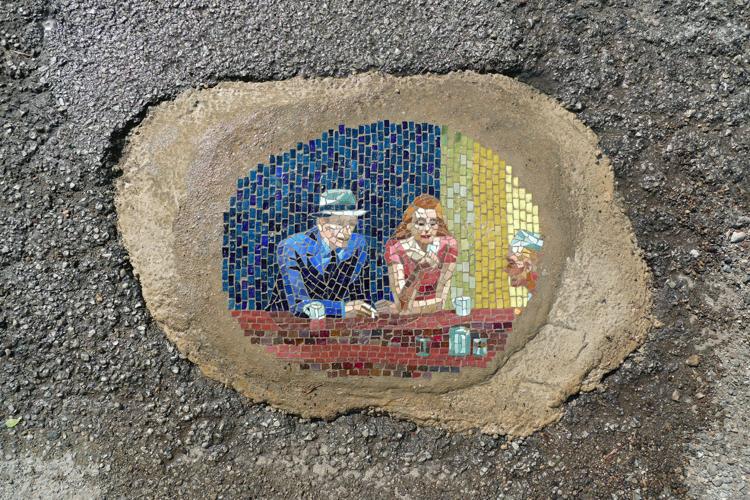 CECI N'EST PAS UNE POTHOLE: One of Jim Bachor's creations reads "This is not a pothole anymore." Jim Bachor

Jim Bachor travels across the country filling potholes for a living. He doesn't just fill the unsightly road gaps with cement, he actually turns them into art - and often, social commentary.

Bachor uses hundreds of pieces of Italian glass and marble that he cuts to create the sometimes subversive mosaics, which he installs on the ground to beautify unsightly city streets. He doesn't work with cities on the installations, he works rogue, and he places the mosaics himself.

Bachor began his pothole art in Chicago, where he lives, by installing the word "pothole" in black and white marble in a road divot in 2013.

"People loved it and thought it was funny," he said. "Was it legal? I still don't know. I decided to turn my hobby into a bit of a Robin Hood thing. If I had to ask for permission, I wouldn't be doing this."

He was recently in D.C. making pothole mosaics of wolves for a conservation group.

Before he left the city in September, he went to Georgetown and installed an image of a spine - to "remind people of what that is," said Bachor, 58, in a pointed barb at Washington politics.

Bachor's work in Chicago includes filling street craters with mosaics of a TV remote control, cats, a Twitter blue check mark and the words "I couldn't do this if I were Black" - as well as other images to make people stop and look, including the word "LIAR."

He's worked in many cities, including New York, where he's made mosaics of dead rats, pigeons and cockroaches. He was called "Pothole Picasso" by the New York Post.

In D.C., Bachor was hired by the #RelistWolves Campaign, a privately-funded group that is working to get Northern Rocky Mountain wolves reclassified as an endangered species in an effort to get them the same protection as other gray wolves.

Samantha Attwood, one of the group's co-founders, said they decided to hire Bachor to fill several potholes with mosaics of wolves to help draw attention to their efforts.

"What he does is really beautiful and creative, and we thought his work would help to raise awareness," she said.

Bachor installed his wolf silhouettes in potholes at three District locations: 600 H Street NE, 1800 H Street NW and 40 N Street NE. He made the pieces earlier in his basement studio in Chicago, then selected the locations himself after asking a few of his Instagram followers in D.C. to narrow down the possibilities.

Attwood said she was pleased to see the campaign take off in front of Solid State Books at the 600 H Street location.

"The store put up a display with books and information about relisting the wolves, and they made sure that Jim's pothole didn't get covered up by cars parking there," she said. "It became a wonderful partnership that is still resonating."

As Bachor looked for the perfect spot for the wolves, he had plenty of potholes to choose from, as complaints have mounted about them in recent years.

Still, he said, he diligently scouts before he decides on a work site for his art, which usually measures 18 inches by 24 inches.

"The perfect pothole is actually really hard to find," said Bachor. "It has to be on the edge of a road that isn't too beat up, and people have to be able to see it from 5 or 6 feet away."

He said about 90% of potholes don't work for his purposes.

"The pothole can't be in the middle of the street because I don't want to block traffic and I don't want to get hit," he said. "And if I show up and a car is parked over the pothole, it's game over. I could be waiting for days."

Bachor said he first became intrigued by mosaic art in the late 1990s during a trip to see the archaeological ruins of Pompeii, Italy.

"A guide pointed out a mosaic on the site and said the art looked the same as the artist intended 2,000 years ago because marble and glass don't fade," he said. "It blew me away to think that an art form could endure for centuries after I was gone."

Bachor returned to his advertising job in Chicago and began dabbling in mosaics. When he was laid off from his job and decided to make a living as an artist, his inspiration came from an unlikely place.

"In 2013, the potholes in my neighborhood were particularly bad," Bachor said. "I remember thinking that potholes were an unsolvable problem that were fixed temporarily, then always had to be redone. Everyone hates them."

While staring at a gaping pothole in front of his house one afternoon, he decided to take matters into his own hands.

"I thought, 'Why not take this durable art form that I'm so passionate about and fix this problem?' " he said.

Bachor filled the pothole with cement and stuck a flat piece of artwork on the top, making his first in-ground art very meta with the word "pothole."

After that first project, Bachor said he decided to transform other ugly potholes in his neighborhood into asphalt masterpieces.

Deep craters that once caused motorists and bicyclists to growl in aggravation suddenly became something to admire.

Bachor enjoyed turning the streets into a drive-over gallery and was soon installing mosaic hot dogs, Cupids and flowerpots.

For some of the designs, he said he opted for a number such as 316,841 to draw attention to the large number of potholes in the city. For others, he installed the phone numbers of car repair places he liked, which he considered a public service.

"It didn't take long before I decided all of the art had to be the same size so I could finish the potholes more quickly," Bachor said, adding that he was spending about $100 to make each one and pothole art wasn't exactly a lucrative career path.

Soon he was selling his art, and people were hiring him to fill potholes.

Now he spends about 10 hours on each piece and said he has created 108 artworks, including commissioned installations for streets in Nashville, Philadelphia, New York City and Los Angeles.

Some of his works are based on popular masterpieces ("The Bedroom" by Van Gogh and "American Gothic" by Grant Wood), while others reflect pop culture or items in the news.

During the pandemic, Bachor has filled three potholes with mosaics of hand sanitizer, a roll of toilet paper and a can of beer, then dubbed his creation "The Holy Trinity." He posts photos of each project on Instagram and leaves a goody bag filled with pothole stickers, patches and limited edition prints for his followers to find near the new street art.

He said his parting mosaic in the district of a spine was something he did on a whim. It sits on a street near Dumbarton Street NW and 30th Street NW. He hasn't heard any feedback about it, which leads him to believe his point might have been missed.

"Unfortunately, nobody has figured out exactly what I've created, but that's okay," he said. "It's art."