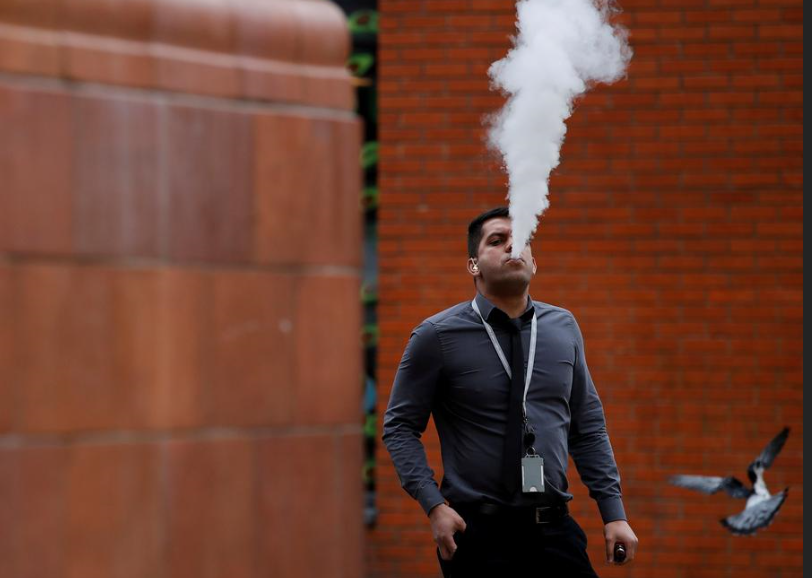 ONE DEATH: A man vapes outside an office block in Manchester, Britain, Feb. 6. Public health officials are trying to identify a respiratory illness that has hospitalized teenagers who vape across the country, up to as many as 94 across various states.  Reuters 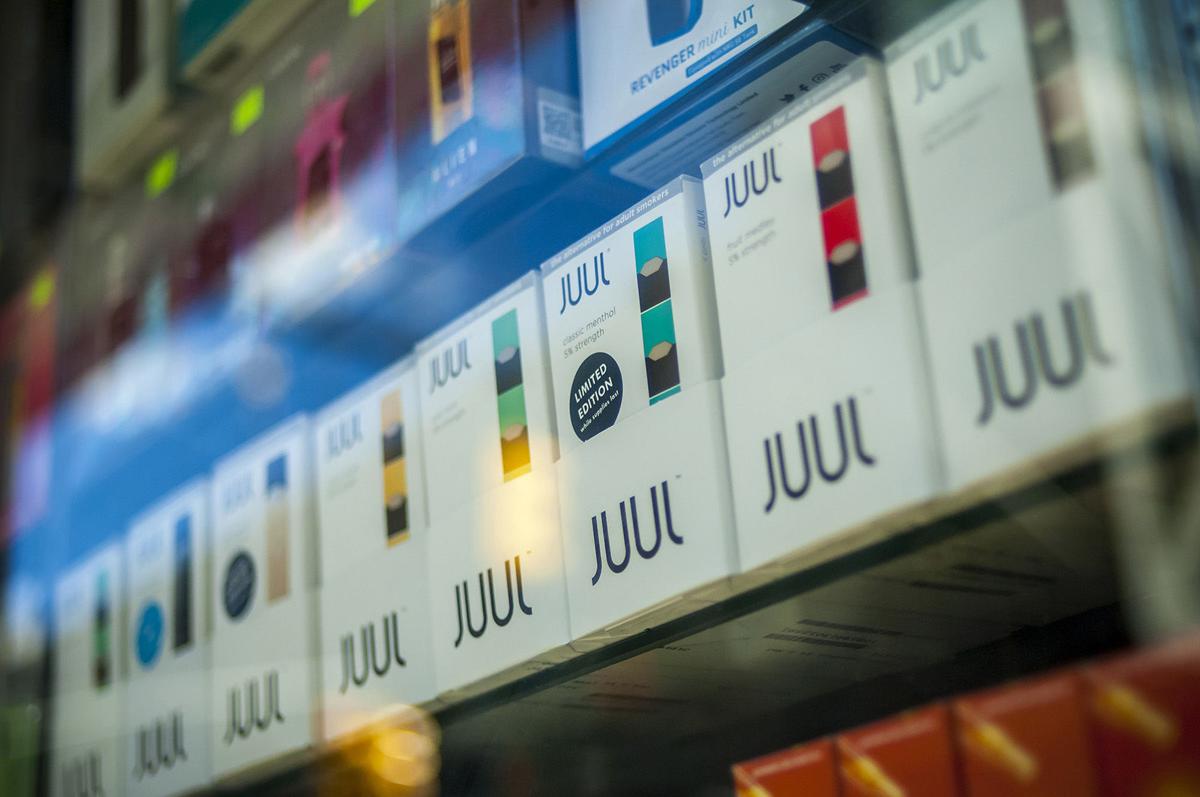 JUUL: A selection of the popular Juul brand vaping supplies on display in the window of a vaping store in New York on Saturday, March 24, 2018. Richard B. Levine/Sipa USA/Tribune News Service 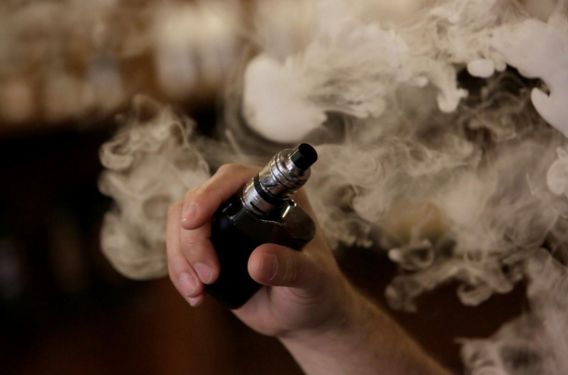 POTENTIAL RISKS: In this file photo, a man holds an electronic cigarette. Vaping has been linked to lung illnesses. Daniel Becerril/Reuters

ONE DEATH: A man vapes outside an office block in Manchester, Britain, Feb. 6. Public health officials are trying to identify a respiratory illness that has hospitalized teenagers who vape across the country, up to as many as 94 across various states.  Reuters

JUUL: A selection of the popular Juul brand vaping supplies on display in the window of a vaping store in New York on Saturday, March 24, 2018. Richard B. Levine/Sipa USA/Tribune News Service

POTENTIAL RISKS: In this file photo, a man holds an electronic cigarette. Vaping has been linked to lung illnesses. Daniel Becerril/Reuters

WASHINGTON – State and federal health officials investigating mysterious lung illnesses linked to vaping have found the same chemical in samples of marijuana products used by people sickened in different parts of the country and who used different brands of products in recent weeks.

The chemical is an oil derived from vitamin E. Investigators at the U.S. Food and Drug Administration found the oil in cannabis products in samples collected from patients who fell ill across the United States. FDA officials shared that information with state health officials during a telephone briefing this week, according to several officials who took part in the call.

That same chemical was also found in nearly all cannabis samples from patients who fell ill in New York in recent weeks, a state health department spokeswoman said.

Vitamin E is found naturally in certain foods, such as canola oil, olive oil and almonds. The oil derived from the vitamin, known as vitamin E acetate, is commonly available as a nutritional supplement and is used in topical skin treatments. It is not known to cause harm when ingested as a vitamin supplement or applied to the skin. Its name sounds harmless, experts said, but its molecular structure could make it hazardous when inhaled. Its oil-like properties could be associated with the kinds of respiratory symptoms that many patients have reported: cough, shortness of breath and chest pain, officials said.

"We knew from earlier testing by New York that they had found vitamin E acetate, but to have FDA talk about it from their overall testing plan, that was the most remarkable thing that we heard," said one official who took part in the briefing but was not authorized to speak publicly.

The FDA also told state officials Wednesday that its lab tests found nothing unusual in nicotine products that had been collected from sick patients, according to another person who took part in the call.

State health departments are reporting new cases weekly. As of Aug. 27, there were 215 possible cases reported by 25 states. Additional reports of lung illnesses are under investigation, according to the Centers for Disease Control and Prevention, which is leading the investigation.

On Wednesday, Oregon health authorities said a middle-aged adult who died in late July of a severe respiratory illness had used an e-cigarette containing marijuana oil purchased from a legal dispensary. It's the second death linked to vaping nationwide and the first to be linked to a product bought at a store. Illinois officials reported the first death last week. They did not specify what kind of product was used in that case.

State and federal health authorities have said they are focusing on the role of contaminants or counterfeit substances as a likely cause of vaping-related lung illnesses. Many patients have told officials and clinicians that they bought cannabis products off the street. Many of those who have fallen ill say they have vaped products containing marijuana, but some also used traditional nicotine e-cigarettes. Many report using both. Authorities said they are not ruling out adulterants in nicotine vaping products.

Although the discovery of a common chemical in lab tests from the FDA and New York's highly regarded Wadsworth Center lab offers a potential lead, officials cautioned that they are a long way from understanding what exactly is making so many people sick.

An FDA spokesman said the agency is "looking into potential leads regarding any particular constituent or compound that may be at issue." The FDA is analyzing sample for a broad range of chemicals, including nicotine, THC, other cannabinoids, "cutting agents" that may be used to dilute liquids, other additives, pesticides, opioids, poisons and toxins.

"The number of samples received continues to increase and we now have over 100 samples for testing," FDA spokesman Michael Felberbaum said Thursday.

Not all the samples are suitable for testing. The FDA analyzed 12 viable nicotine samples and 18 viable THC products, state officials said. Vitamin E acetate was found in 10 of the 18 THC products.

"This was the only thing that seemed to show up in 10 of the 18 cannabis products," said one state official who took part in the call.

The federal lab results seem to confirm findings from New York State. Late last week, its lab found "very high levels of vitamin E acetate in nearly all" its cannabis samples tested. More than a dozen samples were tested, a health department spokeswoman said Thursday. At least one vape product containing vitamin E acetate has been linked to each patient who submitted a product for testing, the department said.

The second report of a death has emphasized the danger of this lung disease. "It was surprising that the patient suddenly appeared without any other underlying health conditions and became ill enough to die from this syndrome," said Ann Thomas, a physician with the Oregon Health Authority.

Vaping refers to the increasingly popular practice of inhaling vapor from an e-cigarette device, which frequently involves heating a liquid that can contain nicotine, marijuana or other drugs.

Vitamin E acetate is basically grease, said Michelle Francl, a chemistry professor at Bryn Mawr College. Its molecular structure means that "you have to heat it up pretty hot" for it to vaporize. Its boiling point is 363 degrees Fahrenheit, which is well above the 212 degrees Fahrenheit boiling point for water, and nearly four times higher than normal human body temperature.

The oil decomposes, then coats lungs

Once the oil is heated hot enough to vaporize, it can potentially decompose, and "now you're breathing in who-knows-what," Francl said.

When that vapor cools down in the lungs, it returns to its original state at that temperature and pressure, she said, which means "it has now coated the inside of your lungs with that oil," she said.

In Utah, clinicians have treated several patients with acute lung injuries who were diagnosed with a rare condition known as lipoid pneumonia, with symptoms including chest pain and difficulty breathing. Those patients had abnormal immune cells filled with lipids, doctors said.

Unlike the human digestive tract, which can break down and get rid of foreign substances, the lungs aren't designed to handle anything except gases, experts said.

Laura Crotty Alexander, a lung inflammation and e-cigarette researcher at the University of California in San Diego School of Medicine, said it's not clear whether the chemical itself or its byproducts could be toxic.

"We haven't looked at the toxicity of vitamin E in the lungs," she said. "The lungs are designed to exchange gas molecules; they're not designed to be exposed to other chemicals."

When the lung cells die, that often provokes an inflammatory response, and "other cells need to come in and clean up the cell debris," Alexander said. But the lungs are very delicate. When extra cells enter, "they get in the way of gas exchange," she said. That makes it more difficult for oxygen to get into a person's bloodstream. The inflammation can cause liquid to accumulate in the lungs, making it difficult for someone to breathe, she said.